Hot, dry conditions caused by climate change have added billions of dollars to the cost of the federal crop insurance program.

VALLEY, Nebraska — While Brian Smith and his fellow meteorologists have access to all sorts of gadgets to help predict storms, they still rely…

In a make-or-break year for the U.S. corn and soybean crops, Iowa may hold the deciding vote.

Hurricane Ida caused a drop in grain prices over the past week as grain facilities saw shutdowns and transportation was impacted. As the affec…

HELENA, Mont. – After weeks of chasing green lines of hay, Joe Dooling is now busy as ever chasing white lines down the interstate. With two c…

It’s said that the month of August or, more specifically, the weather in August, makes or breaks the soybean crop. Well, after a slow start to…

Like most consumer goods, food products are subject to price fluctuations. But some things are more variable than others.

Fall manure applications can be effective

The right timing can help producers get the most benefit out of manure applications, although weather uncertainty adds nuance to the best time…

Extreme weather events have left some towns in eastern North Carolina struggling, and fearing for their futures

"Climate shocks are pushing small rural communities . . . many of which were already struggling economically, to the brink of insolvency," Christopher Flavelle

for The New York Times. Rather than bouncing back, places hit repeatedly by hurricanes, floods and wildfires are unraveling: residents and employers leave, the tax base shrinks and it becomes even harder to fund basic services. That downward spiral now threatens low-income communities in the path this week of Hurricane Ida and those hit by the recent flooding in Tennessee — hamlets regularly pummeled by storms that are growing more frequent and destructive because of climate change." (Not all are

Flavelle's object example is Fair Bluff, N.C.: "The town’s only factory, which made vinyl products, closed a few months after Matthew. The population of around 1,000 fell by about half. The federal government tried to help, buying the homes of people who wanted to leave, but those buyouts meant even less property tax, tightening the fiscal noose. Al Leonard, the town manager, who is responsible for its recovery, said his own job may have to be eliminated, and maybe the police department, too."

The city has received money from several sources for recovery, but it has a bigger plan, Flavelle reports: "Buy the ruined stores downtown, tear them down, clean up the land and turn it into a park that can flood safely. Build a new downtown a few blocks east on land is less likely to flood. Rebuild, revive and regain what has been lost. But the town can’t afford any of it." The price tag: $10 million. Leonard told him, “Fair Bluff’s recovery will go as far as someone else’s money will take us.”

Such money is usually federal, and the federal government lacks a coordinated approach, Flavelle reports: "In 2016, the Obama administration set up a working group among agencies that handle disaster policy and recovery, including FEMA, HUD and the Army Corps of Engineers, asking them to devise a coordinated approach for what experts call managed retreat — relocating entire communities from areas that can’t be protected. But that work stopped under President Donald J. Trump and hasn’t resumed. Instead, agencies continue to pursue their own programs, even if they conflict with each other." As examples, he cites the troubles of nearby towns, Princeville and Seven Springs, and reports the sad calculus: "With each flood, more people leave. The tax base shrinks. Those who stay lose the will to improve their properties, knowing that they’ll likely flood again."

Last year was an unusual year for grain prices, as they went into a rare counter-seasonal rally that has, for the most part, held up since the…

Here's a roundup of extreme weather across the nation, from hurricanes to wildfires, droughts, and extreme heat:

Drought is crushing ranchers in North Dakota. Farmers can't grow enough feed, so they're selling off their cattle before the animals starve. Read more here.

Hundreds of farmworkers across the U.S. have died from heat over the past few decades, but there are no federal rules protecting them. Read more here.

Hurricane Ida slammed into the Gulf Coast, causing widespread power outages and some rural hospitals to evacuate their critical patients to large hospitals—a difficult task when most large hospitals in the region are already overcrowded with Covid-19 patients. Read more here.

All residents on the California side of southern Lake Tahoe are ordered to evacuate as a huge wildfire approaches. Read more here.

Wildfire smoke has clouded summers for kids who are breathing in wildfire smoke, sometimes from hundreds or thousands of miles away. Read more here.

For residents of Paradise, Calif., the still-raging Dixie Fire serves as a constant reminder of the 2018 Camp Fire that destroyed their town. Townspeople are implementing an ambitious plan to identify the properties at the highest risk of burning and, if the owners are willing, buying the properties and turning them into fire-resistant green spaces. Read more here.

As temperatures rise, so do the health risks for California's farmworkers. Read more here.

California is the nation's top almond producer, but the drought is taking a toll on the industry. Read more here.

The megadrought has prompted water cuts for farmers and residents; it's also setting the stage for bitter legal and political fights from conservationists who want to keep waterways wet to protect fish habitats. Read more here.

Conservation groups are suing the U.S. Forest Service over a plan to log some trees that burned down in an Oregon wildfire last year. The groups say an environmental study should be done first to make sure the logging doesn't cause flooding and doesn't hurt nearby rivers or endangered species. It's far from the first time conservationists have clashed with government officials over post-wildfire logging. Read more here.

A July survey of rural bankers in 10 Midwestern states that rely on agriculture and energy showed slightly declining but still strong optimism about the economy, with the overall Rural Mainstreet Index falling slightly to 65.3 from July's 65.6. The index is a survey of bankers in about 200 rural communities with an average population of 1,300 in Colorado, Illinois, Iowa, Kansas, Minnesota, Missouri, Nebraska, North Dakota, South Dakota and Wyoming.

Record-low interest rates, solid grain prices, and growing exports are key to rural economies in the areas surveyed. Agriculture Department data show that 2021 agriculture exports are more than 25 percent higher than from the same period in 2020, reports Creighton University economist Ernie Goss, who compiles the index.

The home-sales index hit a record 84.4 from July's 77.4, while the retail-sales index dropped from July's 64.1 to a still-positive 54.7. The farmland price index rose to 76.6 from July's 71.0, marking the first time since 2012-2013 that the survey has recorded 11 straight months above growth neutral. The farm equipment sales index declined to 64.7 from July's 67.2, but the readings over the past several months have represented the strongest consistent growth since 2012, Goss reports.

However, the confidence index for local economies six months out fell to 59.7 from July's 65.6. That reflects bankers' worries about drought, rising coronavirus infections, political turmoil in Afghanistan, and widespread dislike among the surveyed bankers about the $3.5 trillion social-infrastructure spending bill before Congress. Only 9.4% of surveyed bankers support the bill (see chart below). And, though the new hiring index rose to 70.3 from July's 67.6, many bankers worry about continuing labor shortages that hinder rural businesses' growth. 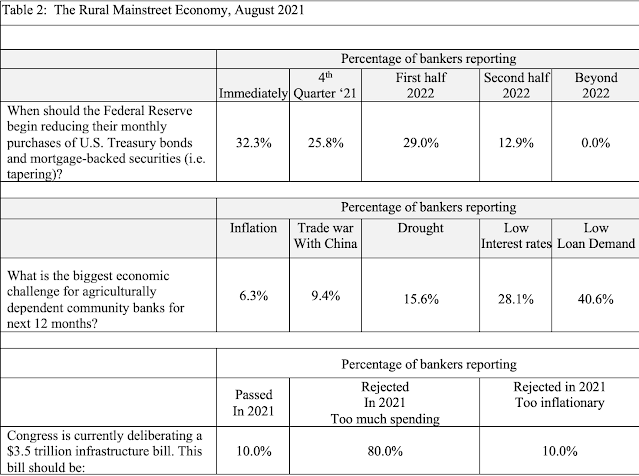 With a big-ticket WASDE report, it was a busy week for the grain markets.

Miracle of trained volunteer firefighters not an accident

My hometown is kind of a mess. On a recent weekend, our grain elevator, by far the biggest structure in town, suffered a major fire.

The Dixie Fire is about five times the size of Disneylandand is only 30% contained. (Google Maps screenshot)

Davidsons preparing to get started on harvest

TIOGA, N.D. – Ryan Davidson, who farms with his wife, Jenice, and two kids, Gavin and Gracelyn, was taking a short afternoon break at Powers L…

A tornado with winds up to 150 mph tore through Grant County Saturday night, destroying six homes and 11 other structures in the Boscobel area.

The Intergovernmental Panel on Climate Change, scientists convened by the United Nations, has issued many reports on global warming and climat…

Wildfire roundup: Three lessons for forest towns, one for feds; what it's like to wait, worry as fire threatens your town

The remains of a building and truck in Greenville, California. (Washington Post photo by Stuart Palley)

The Rural Blog has already listed some of the rural-interest features in the bipartisan infrastructure package, but here are some more, as not…

Grain markets were on a roller coaster over the past few weeks as weather has dominated the price action throughout July.

Fall calving can give cattle producers some other options, from a management and marketing perspective.