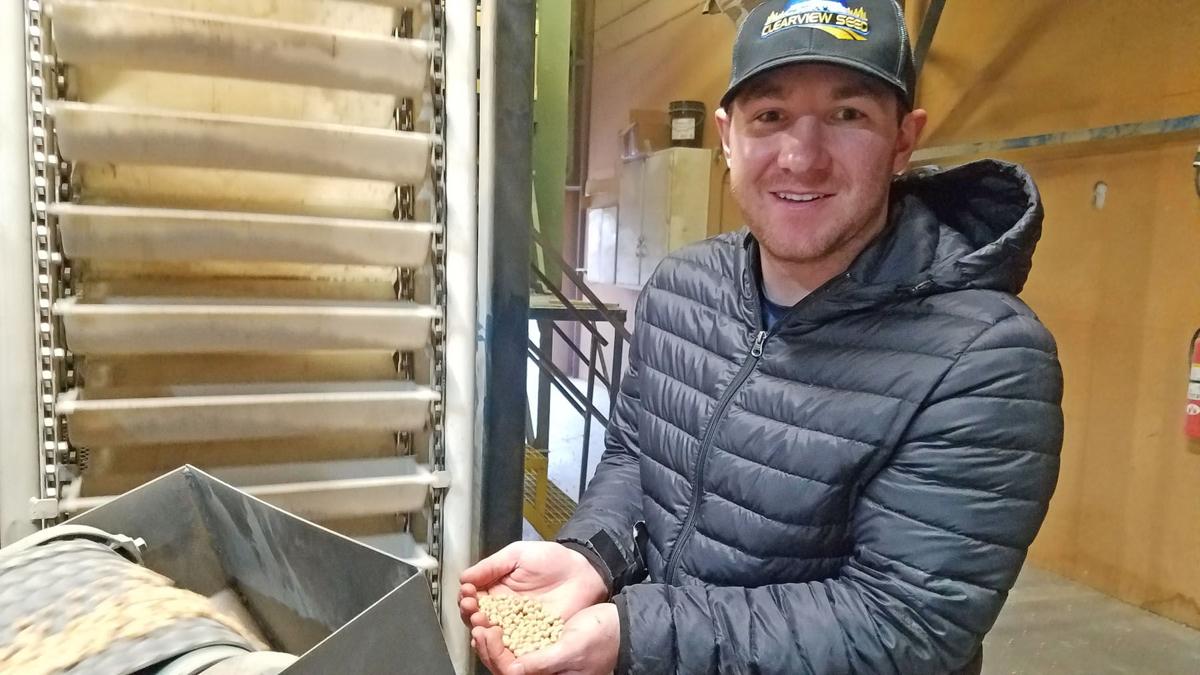 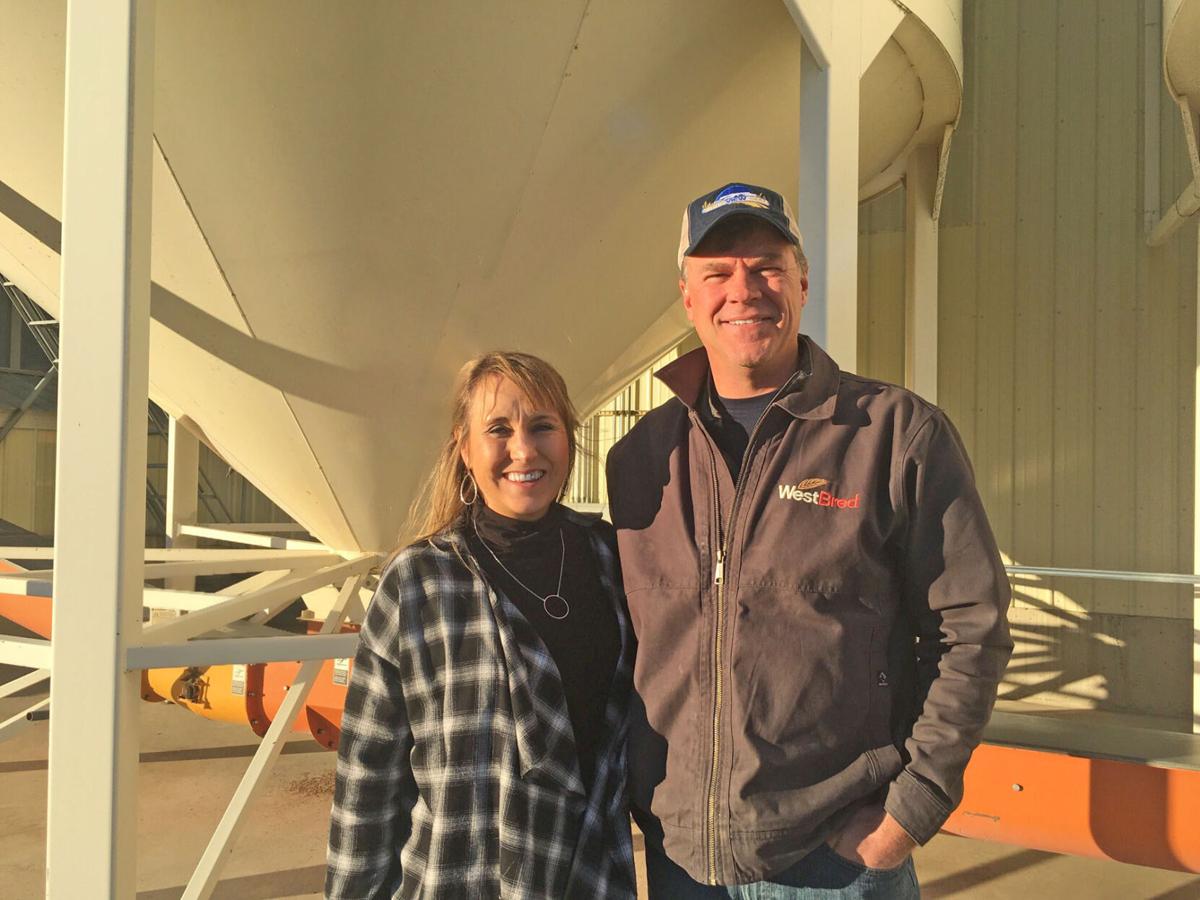 Heather and Mike DeVries own and operate ClearView Seed near Denton.

The warm afternoon sun shines on the hopper bins filled with seed at ClearView Seed near Denton, Mont.

“We’ve had a nice winter so far – it’s been windy but nice,” said Mike DeVries who owns ClearView Seed with his wife, Heather.

The couple has operated the seed sales and custom seed cleaning business for the past 17 years, and has seen a couple of major changes to the business over the last few years.

For one, their son, Joel DeVries, joined the company after graduating from Montana State University with a degree in plant sciences.

“My son joined the business and it has been a lot of fun working with him. We’re enjoying it,” Mike said.

Joel is married to Kara and they have two children.

“Joel is handling the production and agronomy side of the business for me,” Mike said. “Joel also likes to sell seed and is good at it, plus he is very mechanically inclined. He enjoys working on equipment.”

The other major change to the company has been expanding its plant facility for pulse crops.

“We want to do a better job handling the pulse crops,” he said.

They put in some gentle handling bucket elevators and other equipment, such as a gravity table, to separate, sort and move pulses.

At ClearView, they contract with growers in the region to produce Foundation and Registered seed that can be sold as Certified seed to producers.

“We are a large winter wheat producing region, and pulses are a good rotational crop with wheat,” he said.

The main pulses ClearView Seed will sell to producers this year are chickpeas and lentils.

“We used to sell green and yellow peas but found it is a little too hot here for us to grow them,” he said. “But chickpeas and lentils have been a good fit here, and they are a fantastic rotation with wheat.”

Lentils are shallow water users, which works in the region, he pointed out.

“We get a timely rain in the middle of the season and they do really well,” Mike said. “But they are also drought tolerant.”

Richlea lentils have neutral flavor and are desirable by end-users with a shorter cooking time than other pulses.

“We stay with the greens because we don’t want to mix colors. A lot of these Richlea and Avondale lentils are for the export market,” he said.

The main chickpea ClearView sells is CDC Orion from Meridian Seeds. Orion is a kabuli, the larger-sized chickpeas known throughout the industry for their quality and yield.

“Orion has good Ascochyta resistance. We don’t have a lot of it up here, probably because chickpeas are new to this winter wheat growing region. As we grow more chickpeas, we may see more issues with it,” Mike said.

Chickpeas and lentils are great to rotate into the cropping system to control pests.

“Rotating in chickpeas or lentils helps control some difficult grassy weeds and we can break up disease cycles,” he added.

In addition, pulses fix some nitrogen for increasing yields in the next crop and to slowly cut down on fertilizer costs.

“Pulses fix some N, although it is a slow equation. But it helps to not have to put quite so much urea down. Producers worry about whether the urea will be available at the right time the crop needs it,” Mike said.

Too much urea can also “drive down pH” in the soil.

“That is what is nice about chickpeas and lentils. They park some N there that is not available immediately but as the crop is growing, that N is there and it can build protein instead of going to the weeds,” he said.

For spring wheat, ClearView mainly sells Vida, an MSU variety. It is a high-yielding, hard red spring wheat with moderate resistance to leaf and stripe rust.

“Vida works well in this region. It has great yield potential,” Mike said.

Mike said they do see wheat stem sawflies in their area, but not like they see in some other areas.

“That is where Vida helps. It is a semi-solid stem and has some resistance to the sawfly,” he said.

“That is a solid stem, derived from Choteau. It was bred at MSU and licensed to WestBred,” Mike said. “It has been a reliable solid stem wheat.”

While the yield is not as high as Vida, it was developed for those fields that have had high sawfly pressure.

“We grew a new one this year called Ranchero. It is brand new and is a high, high-yielding spring wheat,” he said.

The business also sells some hay barley for cattle producers, Westford and Lavina.

“We have a fair amount of cattle producers in this area,” he said.

Currently, ClearView Seed is busy cleaning their own production ahead of this year’s sales.

“We’re starting to think about what we want to produce for this year,” he said.

They are also finishing up “toll milling” for a pulse company.

“We are cleaning their commercial chickpeas and lentils so they can be put in totes and shipped by rail,” Mike said. “We call it making hay in the middle of winter.”

They also are a custom seed cleaning business for producers in the area.

Mike has a history in agriculture. He grew up on the family farm near Conrad. He said he decided to go to college after spending a lot of time sitting in the cab of the combine and cutting an old malt barley variety that “made my skin very itchy.”

“I decided to go to college for agribusiness right there and then,” he said, with a smile.

Mike received a degree from Montana State in agribusiness and worked with Western Plant Breeders in Bozeman, Mont., for 14 years.

When the talk was that Western Plant Breeders might be bought out and Mike didn’t know what would happen to his position, he looked around for another job in agriculture.

Mike knew Richard Barber at the well-respected Barber Seed Service Inc., and joined him as a partner in 2004.

When Barber retired in 2009, the DeVries’ took over the business. They have enjoyed operating the seed business since then.

“We enjoy working with producers in the region and helping with seed choices and doing custom work,” he said.

Mike is hoping for a good growing season again this year.

“We had a nice growing season last year. It was not too hot, and we had adequate moisture,” he said. “We had fantastic winter wheat yields and fantastic lentil crops.”

After seed sales are finished, the DeVries’ will plant all their varieties in strips in a one-acre strip for producers to check out.

ClearView hopes to be able to have their field day in 2021, so producers can see crop varieties side-by-side in the field. They were not able to have it in 2020 because of COVID.

“We usually have a field day in July. We like to take producers out and show them our strip trials,” he said.

Montana receives some much needed moisture

After a dry winter and spring, producers across Montana leaped for joy as a storm movement swept across the state during the week ending May 2…

Heather and Mike DeVries own and operate ClearView Seed near Denton.