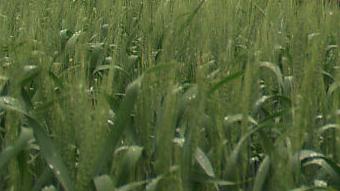 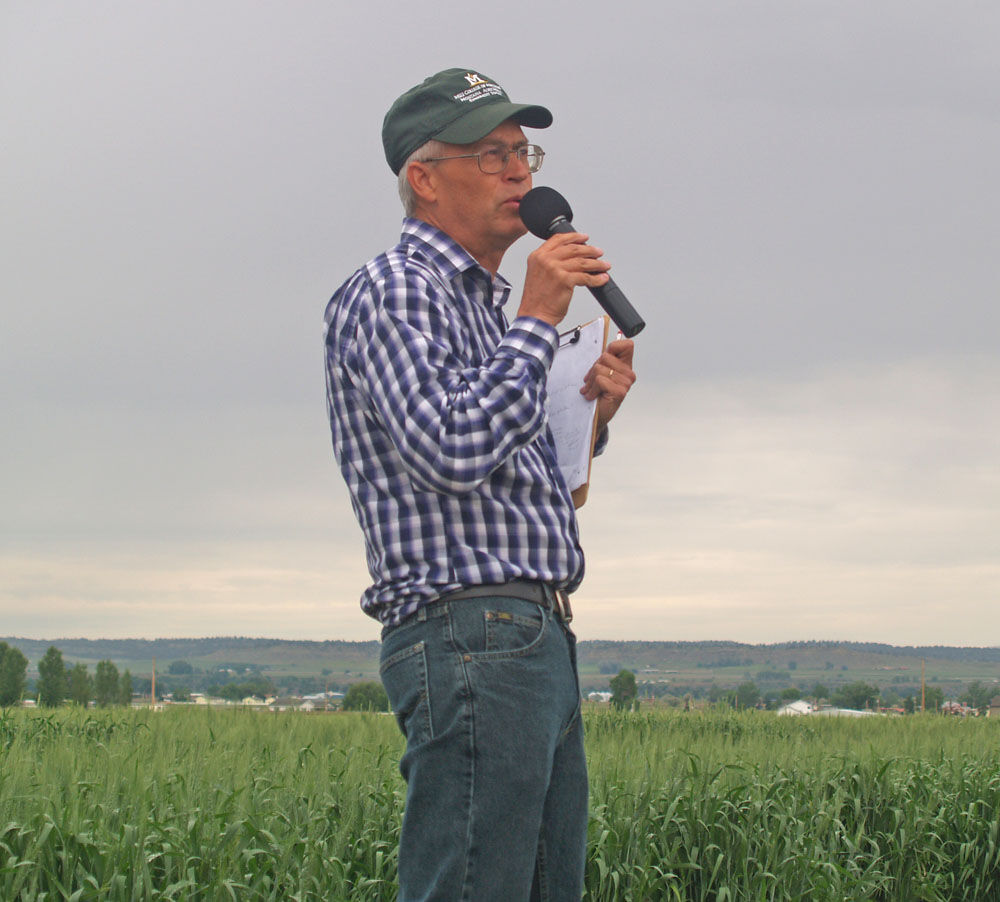 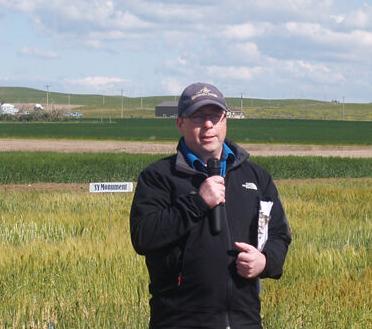 The American Association for the Advancement of Science named Talbert a fellow in November 2019, one month before he retired last December. Few receive that honor.

Talbert’s cutting-edge technologies in wheat breeding and plant genetics brought spring wheat varieties to Montana producers that had the kind of traits they needed – with good agronomics, top disease and insect tolerant packages, and high quality baking and end-use qualities. These cultivars helped producers compete well in the marketplace.

Talbert was also easy to work with – a plant breeder with a gift for giving presentations that made wheat genetics understandable and exciting to the many producers and others who came to field days. He knew wheat and helped others appreciate the number one ag commodity in Montana.

“Luther was a great mentor, and he had a gift for explaining spring wheat breeding in a way that producers and others could understand,” said Jason Cook, MSU trait integration breeder and geneticist. “Luther was always about the team and felt the whole team was responsible for the excellent spring wheat varieties that were released for Montana growers.”

What were Talbert’s top spring wheat varieties that were released by the Montana Agricultural Experiment Station over the years?

In Cook’s opinion, Talbert’s three most successful spring wheat varieties, in terms of acreage and impact, were Choteau, McNeal and Vida.

“Vida has more of a legacy because a lot of the new releases have Vida as a parent,” Cook said.

“McNeal was widely grown in Montana, especially in eastern Montana,” he said. “At the time, it was one of the varieties with high yields and it had excellent baking quality, as well.”

Choteau, a wheat stem sawfly tolerant variety, was grown on 4.26 million cumulative acres, and was the number one variety in Montana in 2010. The solid stem variety was released in 2003.

The sawfly has been one of the toughest insect problems in Montana, with several researchers and breeders working on various aspects for fighting it.

Talbert has developed other sawfly tolerant varieties since Choteau.

“We are continuing to work on varieties that can be tolerant of the sawfly,” Cook said. “We have identified some new sawfly resistant genes that we are moving into the spring wheat and winter wheat breeding programs.”

A team of MSU researchers, including Talbert, found the resistant sawfly genes in the landraces in the world wheat collection.

“There are collections of landraces from all over the world, and we screened them, and found some good, resistant genes. Hopefully, this will enhance our ability to develop new sawfly resistant varieties,” Cook said.

Cook will start with moving the genes over to some of their newest spring wheat releases, such as Lanning, or other experimentals.

Vida number one in Montana

Vida has been the number one spring wheat variety producers have grown in Montana every year since Talbert’s breeding program released it in 2005.

“Traditionally, Luther focused on varieties that did well in drought. There were many drought years in the early 2000s, and it was under those conditions that Vida was selected,” Cook said.

Millions of acres have been devoted to Vida over the years.

Vida is often used in crosses to make improved varieties.

“Vida has the complex stay-green trait, where the plant stays green longer during heading until maturity, and has a longer grain fill period,” he said.

Studying and utilizing the stay-green trait was one of Talbert’s many contributions to the spring wheat breeding program.

“It is an important trait in drought years, because if it stays green longer during that heading period, it tends to have larger kernels and yield,” Cook said. “Farmers have been pretty happy with Vida during drought years.”

Vida is often used in crosses to make other good varieties.

The last few years, there were more high moisture years, so geneticists must always play a “balancing act,” according to Cook.

“There is still value having varieties like Vida, but we also need other varieties that are earlier maturing and can take advantage of more moisture,” he said.

However, earlier maturity varieties still need to yield well and have good quality.

Other varieties with important traits

Cook said Talbert developed many other varieties that were important to Montana farmers, depending on their needs.

“The variety Egan, essentially McNeal, incorporated resistance to the OWBM, and that was a huge help to farmers who saw substantial yield losses to the insect,” he said.

Farmers, especially in the northwestern region, have regained yield since Egan was developed.

In developing Egan, Talbert moved a high protein content gene into Egan, and it was not uncommon for the variety to have a high protein, as high as 17 percent.

Some farmers continue to be interested in Egan to blend with lower protein varieties and come up with a usable wheat.

Egan also came with a refuge in the bag, a 90:10 blend with a susceptible spring wheat variety.

“Because it had that OWBM gene in it, we wanted to protect the gene and avoid development of resistance in the OWBM gene, so they included a refuge in the bag with the variety,” Cook said.

Lanning is a new spring wheat variety that Talbert’s program recently released. The impact is not known yet, but it is expected to be an excellent variety, especially for those with low pH soils.

After Lanning was released, it was found to work well when there was aluminum toxicity due to low pH soils.

“We are still working on aluminum toxicity, and we regularly test experimental lines in locations that have high aluminum. It is a good way to screen lines to see if any varieties have the tolerance to aluminum,” he said.

There are a number of varieties that are currently tolerant, including McNeal, Duclair and Lanning.

Talbert will have a long and important legacy in Montana’s spring wheat genetics program, and will be greatly missed by many.

“Luther was an active participant in those projects and worked on developing new molecular and genetic population tools that aid the improvement of wheat varieties,” Cook said. “Sawfly is starting to get more attention as it is now in Nebraska, Colorado, and Kansas,” Cook said.

Spring wheat cultivars are developed for high yields, high quality, or to address a specific disease, insect or problem.

Currently, Cook said they are working on Fusarium head

“We want to make sure we can test these varieties in the field and can keep breeding for it. We want to maintain the genes for resistance,” he said.

In the future, Cook said they would release a variety with FHB resistance.

In 2020, producers in Montana saw wheat streak mosaic virus, especially in fields with volunteer wheat in the previous fall. The green bridge wasn’t able to be broken because of the heavy fall moisture.

At the spring wheat breeding program, Cook is working as usual – in spite of COVID-19.

“We haven’t slowed down breeding work at all with the coronavirus. We are still working to gather information on varieties and we need to stay alert if any diseases happen to come up,” Cook said.

Montana’s Gallatin Valley has become one of the state’s most sought-after places, but the valley has more to offer than just stunning views. I…