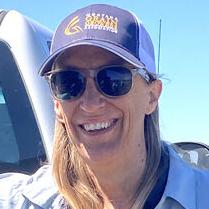 Karen Sowers, executive director of the PNW Canola Association, talks about her organization at a field day in Sidney, Mont. Later, she toured eastern Montana and went through canola fields in the Sunburst area, as well. 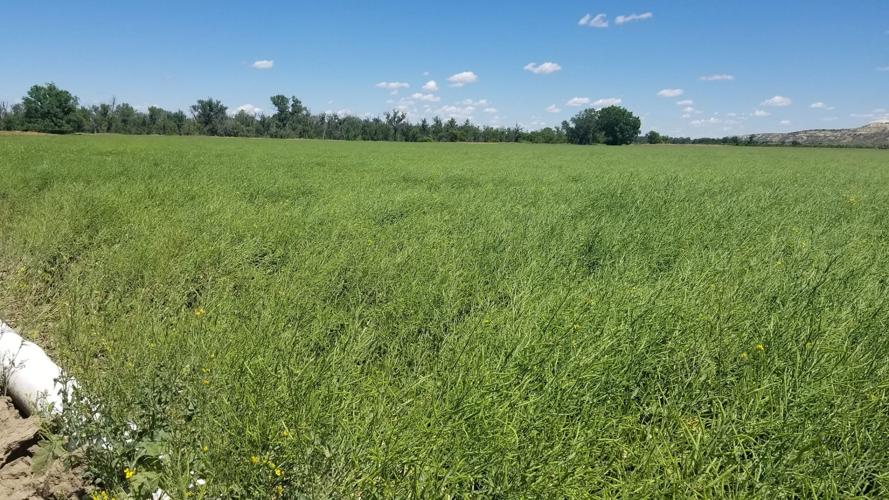 This field of irrigated canola near Fallon, Mont., was developing well in July. 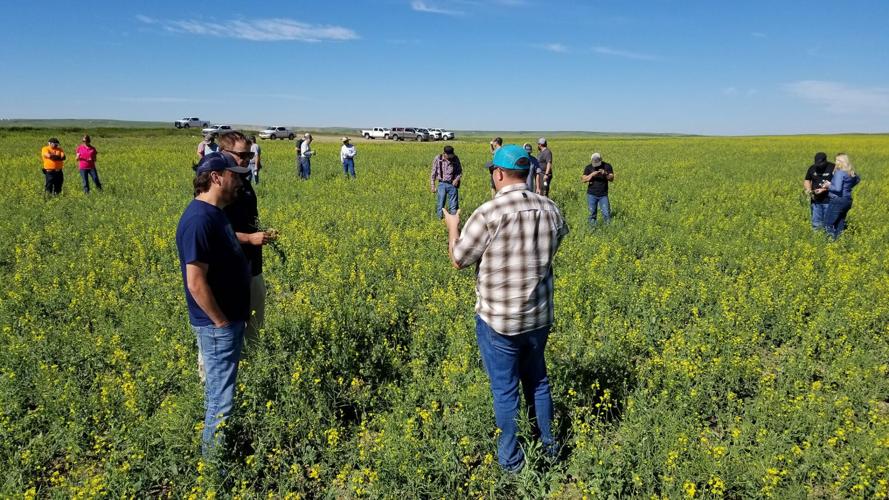 In Scobey, Mont., producers gather for a canola field day in July. 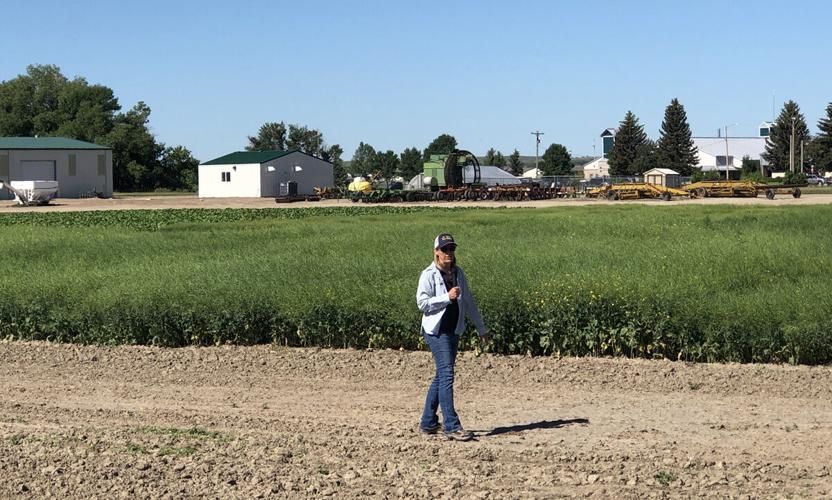 About the cover: Karen Sowers, executive director of the PNW Canola Association, talks about her organization at a field day in Sidney, Mont. Later, she toured eastern Montana and went through canola fields in the Sunburst area, as well.

SIDNEY, Mont. – Canola is grown in nearly every county throughout Montana, and for growers in search of reliable information on the best management practices for the crop and how to improve yields, the Pacific Northwest (PNW) Canola Association is available to provide support.

“We are a membership-based organization, and we want Montana canola growers to know that we are a trusted source of information about canola production,” said Karen Sowers, executive director of the PNW Canola Association.

The states represented in the organization include Montana, Idaho, Washington and Oregon.

“Our mission is to help grow the canola industry in the Pacific Northwest and Montana through education, advocacy, and marketing. We hope producers and industry across the four-state region choose to support what we are doing,” Sowers said.

Sowers travelled throughout eastern Montana in July, introducing the five-year-old organization to producers at field days and spoke with canola growers and crop advisors at tours and small gatherings in canola fields.

“Around the state this summer, canola growth and condition vary tremendously, mainly due to whether or not a field got rain. There were areas that weren’t getting any rain early in the season and then they got rain. They may not have a bumper crop, but it will be a crop,” Sowers said. “In other places, the canola looks really nice.”

In the Sunburst area in the Golden Triangle, the canola fields had been dry, but with some later rains, the crop has looked better, although below average, according to Sowers.

In eastern Montana, the region has received plenty of precipitation this growing season, but they’ve also had issues with hail, wind, and grasshoppers.

“Overall, the canola looks good there,” she said.

Sidney is one of the centers in the state that is conducting a spring canola variety trial.

“Canola can be an excellent crop to try if you have a continuous wheat or wheat/barley rotation. Canola has a whole different root structure than cereals,” Sowers said. “Anytime you rotate canola or another broadleaf crop with a cereal crop, you are going to break up pest and disease cycles, tackle problem weeds, and improve soil health.”

PNW Canola held “Stop ‘n’ Talk” tours near Terry on July 11, and between Scobey and Flaxville on July 13.

“We started those a few years ago. The format is informal – typically short notice, with a few producers to talk about a problem or a new technology – anything canola. It is easier to ask questions in a small group,” she said.

The tour near Terry was at a farm with irrigated winter canola.

“The producers are really excited about the crop. This is their second year growing canola and the canola this year looks even better than last year’s crop. They’re going to be planting next year’s winter canola before too long,” she said.

Near Fallon, the group saw a beautiful field of irrigated spring canola.

For the July 13 tour, PNW Canola partnered with Pro Co-op to line up several stops between Scobey and Flaxville, and farmers saw first-hand that canola was a hardy crop.

The first stop was in a spring canola field that was hit with pea-sized to golf ball-sized hail on July 5.

“The pods were exposed to hail and wind, but it is coming out of it and making a remarkable recovery,” Sowers said. “Many of the stalks were bent but not broken, and they are now growing upright again and the crop is continuing to flower.”

“I was surprised to see that, and there were also fields that grasshoppers have been feeding in this year,” she said. “There are always plenty of challenges to farming.”

“There are so many more spring and winter canola varieties now than there were five years ago,” she said.

Herbicide-tolerant canola hybrids with resistance to a specific herbicide are a major technological advancement over the last few years.

“With the newest TruFlex spring canola, for example, you can apply a higher rate of glyphosate all the way up to flowering. That increases the application window for a late flush of weeds or unexpected delays in spraying,” she said.

There are also conventional winter and spring canola varieties, and a few cultivars with stacked herbicide traits available.

“Another critical component of all canola cultivars is traits for resistance to blackleg disease, and more recently, clubroot,” Sowers said. Both diseases can cause significant damage to canola.

There are currently strong markets for canola, driven by continued high demand for the oil and meal.

Canola is processed for oil and meal, and the meal is a high-quality livestock supplement.

Producers should find out ahead of time where they will take their harvested canola seed. Canola is not accepted at every local elevator, so it may be necessary to deliver it a longer distance.

“Canola requires special handling and not every facility is equipped to handle the tiny seed,” she said.

PNW Canola is a group composed of not only producers, but also processors, seed companies, crop input suppliers, conservation districts and universities.

The organization will be joining Montana Grain Growers and Northern Pulse Growers for the annual MGGA Convention in Great Falls from Nov. 29 through Dec. 1.

“It is a special treat for all growers – this will be a joint convention. It should have lots of great information for everyone, so mark your calendars,” Sowers said.

Sowers created PNW Canola Association’s Facebook and Instagram pages, with many photos of beautiful fields of canola that she has visited.

For more on the PNW Canola Association, see https://pnwcanola.org.

Farmers looking for a profitable cover crop may have a new option in an emerging venture being launched by Yield 10, a bioscience company acti…

Dr. Magan Lewis, equipment and automated field sensing lead from Bayer Crop Science, promotes the value of science to girls and women through …

When considering a workable rotational crop to the winter wheat grown in Montana, one farm near Broadview has been depending on safflower as a…

Karen Sowers, executive director of the PNW Canola Association, talks about her organization at a field day in Sidney, Mont. Later, she toured eastern Montana and went through canola fields in the Sunburst area, as well.

This field of irrigated canola near Fallon, Mont., was developing well in July.

In Scobey, Mont., producers gather for a canola field day in July.

About the cover: Karen Sowers, executive director of the PNW Canola Association, talks about her organization at a field day in Sidney, Mont. Later, she toured eastern Montana and went through canola fields in the Sunburst area, as well.