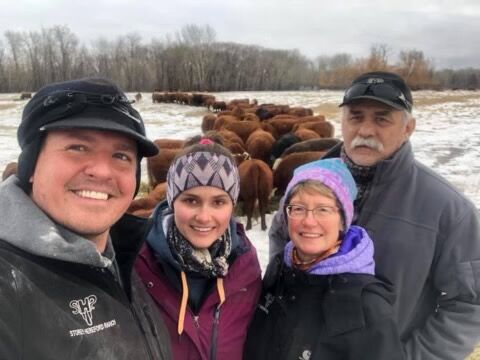 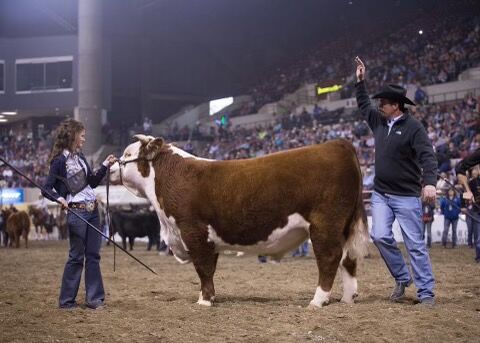 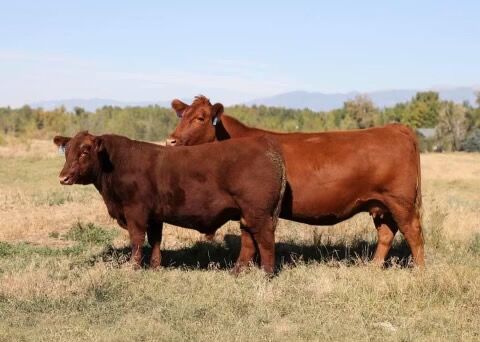 Storey Hereford and Harmony Hill Red Angus sells only yearling bulls as they wean off the cow heavy and have no trouble physically cover mature cows during their maiden breeding year.

As the fourth generation on her family’s ranch, for Katelyn (Kohlbeck) Knebel, raising cattle is about legacy and passion. She follows in footsteps of her mother, Kathy (Storey) Kohlbeck, as a cattlewomen dedicated to breeding quality Hereford and Red Angus seedstock that are noted for their soundness and docility.

The Storey name is one synonymous with Herefords in the state of Montana. Katelyn’s great-grandparents homesteaded on the banks of the Gallatin River in 1919, purchasing their first registered Hereford cattle in 1935. The family stuck true to the breed’s foundation, focusing on horned genetics until the 1980s when Katelyn’s parents, Chuck and Kathy, returned to the operation and began incorporating more Polled genetics.

Katelyn grew up in a lifestyle filled with cows. She was her dad and grandpa’s “right hand man” in the shop, out in the calving lot, or in the hay field. Immersed in the traditions of her family heritage, Katelyn grew up showing Hereford cattle. She obtained bachelor’s degrees in Animal Science and Ag Economics from Oklahoma State University in 2012 and a master’s degree in Meat Science from Montana State University in 2013. After marrying her husband, Garrett, the Knebels returned to the Storey family land and went right to work carrying on the family business.

Garrett comes from a Red Angus background, so in addition to running Storey Hereford Ranch, the Knebels also sell registered Red Angus seedstock under the name Harmony Hill Red Angus. Currently, the couple is running about 170 head of mother cows and 70 replacement heifers. The operation is split evenly, numbers wise, between Hereford and Red Angus.

“I will never leave my Hereford roots, but I do love what the red breed is turning into,” Katelyn stated.

The Knebels are focused on raising practical, yet progressive cattle. To do this they run a very intimate breeding program, opting to either AI or put embryos in all of their cattle and clean them up with top quality herd sires. They aim to produce bulls that will last and cows that can catch a judge’s eye in a show pen, but at the same time, be able to work the range and maintain their rightful spot in the production herd.

“My goal is: anything that doesn’t catch in embryo or with AI, can be bred naturally and still produce a calf that we can sell,” Katelyn added.

Each summer the Knebels pick out their top bull calves, and after Jan. 1, those bulls are offered as yearlings to the public via private treaty. Weaning heavy off the cow and developed using a time-tested ration, the Knebels attest their bulls have no issues covering cows during their maiden breeding season.

The top heifer end of Storey Herefords and Harmony Hill Red Angus are sold during two fall online sales – Flash & Function and Red Redefined. The Heifers are sold all over the United States and Canada with some of the females, Katelyn says, going to be shown while others go on to be donors.

While showing cattle is a big part of the Storey Hereford and Harmony Hill operation, the Knebels have worked very diligently to tailor a breeding program that produces cattle that are functional. They have cattle that hit the ground with the phenotypic appeal needed for the ring, but they are also reproductively and structurally correct enough to be efficient in the pasture.

“Garrett has this saying that goes: ‘Because practicality is a beautiful thing,’” Katelyn said.

The Knebel’s cattle have won on some of the industry’s biggest show stages, including the NILE and even the coveted Denver Stock Show. Katelyn is quick to point out, there is no better feeling then winning a show with something born and raised on the land her family homesteaded over 100 years ago.

The Knebels have their eyes on the horizon as they continue to develop and grow their operation. Physically expanding is a difficult task in the Gallatin Valley, but the couple is looking at creative ways to make sure there is grass under their cows. In addition to investing in the land, the Knebels would like to someday add a commercial aspect to their operation.

The seedstock business is most often a generational endeavor, with the passion for well-bred cattle transcending from one generation to the next. Katelyn and Garrett Knebel embrace the legacy of those who came before them, but they are also looking to innovate and push their cattle genetics into the future. This young couple has rightfully earned their spot in the cattle industry.

Geo-fence technology could be the wave of the future

MALTA, Mont. – Virtual geo-fences may be the wave of the future for ranchers who are looking for solutions to managing intensive grazing with …

POLSON, Mont. – The Mission Mountains, located in northwest Montana, are as picturesque as they come. Snow-capped peaks stand in stark contras…

Storey Hereford and Harmony Hill Red Angus sells only yearling bulls as they wean off the cow heavy and have no trouble physically cover mature cows during their maiden breeding year.