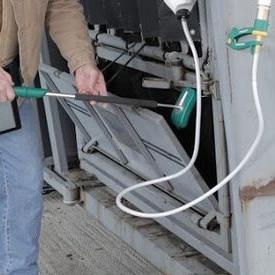 While a calf is in the chute, a producer places the Whisper On Arrival device on the animal’s chest. When the data is analyzed and the readout is “treat,” the veterinarian, on the right, prepares to administer the antibiotic. Courtesy photo. 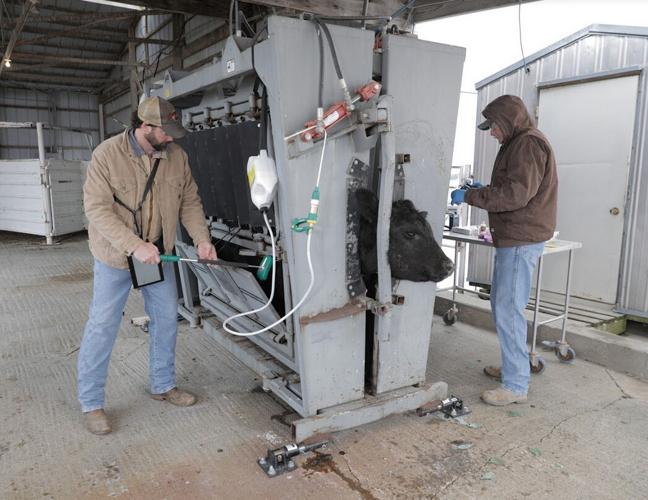 Recent Merck cattle technologies include “Whisper On Arrival,” a device that uses a number of factors to predict which cattle may be at higher risk of sickness to determine a way to treat bovine respiratory disease (BRD); “SenseHub Feedlot,” an illuminating electronic ear tag designed to improve the overall accuracy of disease detection; and “SenseHub Beef,” a monitoring tag that helps producers manage the fertility of their beef herd with more accuracy and optimizes overall cattle health.

Jason Nickell, director of insights and outcomes at Merck Animal Health, said cow/calf producers and feedlot owners are now beginning to receive the same benefits from using new and emerging cattle technologies that row crop farmers have been receiving for a long time from precision ag technologies.

“Over the past three decades, the row crop industry has developed the ability to utilize technologies to increase the value from each acre of farmland, while improving efficiency of that farmland,” Nickell said. “It’s a win-win situation to be able to do that and that’s what we are doing for the cow/calf and feedlot sectors.”

In the same way as row crop producers, cattle producers can now utilize and apply different sensory technologies to basically “gather more information from cattle to make better decisions” that will ultimately lead to more profitability with their operations and improved animal health.

BRD is the most prevalent infectious disease issue in the post-weaning phase of beef production, according to Nickell.

“Once that animal leaves the farm of origin and goes to either a background facility or goes directly to the feedlot, BRD is our number one health issue,” he said.

At Merck Animal Health, the company is focusing on providing data that can help detect sick cattle earlier, more efficiently, and more accurately than the normal visual observation.

“Historically, the concept of metaphylaxis has been successfully implemented to control the negative effects of BRD,” Nickell said.

Metaphylaxis is the administration of a properly-labeled antibiotic to the entire group, when “we know the calves have been exposed to risk factors that increase their likelihood of developing BRD and it is likely animals within the population are at various stages of disease,” he explained.

Nickell pointed out calves coming from the ranch, going through the sale barn, being moved on a truck to be surrounded by a number of new calves are faced with a “tremendous” amount of stress, increasing the likelihood of getting BRD.

“It is just like sending your kids to kindergarten for the first time. They’re used to being home in a low-stress environment and all of a sudden, they are put into a scenario that is completely foreign to them with all kinds of new kids, and what happens two weeks after they get started? They come home with a cold,” he said.

Whisper On Arrival is a tool that can predict whether thecalf is high risk or low risk of BRD while that animal is in the chute, allowing antibiotics to be given to only animals at high risk.

The veterinarian or user holds the Whisper On Arrival sound capture device to each animal directly on the animal’s chest right behind right front limb.

“In a lot of cases, producers may over-administer antibiotics. This is not always the case and it is never intentional, but we never really knew the individual animal disease state, and that is where Whisper On Arrival can be a very useful technology,” Nickell said.

The technology captures eight seconds of lung and heart sounds and analyzes that, along with rectal temperature and weight.

Based on individual animal examination, the algorithm calculates each animal’s risk of sickness, so that producers and veterinarians can then use this information to determine which beef cattle may benefit from antimicrobial therapy for BRD control, while leaving those at reduced risk of disease untreated.

Nickell compares the technology to a stress test in humans, where the objective is to determine the risk of a cardiovascular event.

“We are doing the same thing here. We’re capturing a great deal of information on each animal and leveraging the stress that they have endured over the last several days,” he said.

After capturing information on the calf, the technology performs the analysis and predicts the potential risk of developing respiratory disease.

“If the calf is at high risk or at low risk of developing BRD, we currently use that information to make medical decisions at the individual animal level,” he said.

Nickell pointed out that when the calf comes into the chute, no one knows if the animal is actually sick at that point – or will get sick soon.

“We don’t know if the animal is going to get sick at some point over the next seven days. All we know is that by using Whisper On Arrival, we are only giving an antibiotic to the animals that are high risk based on the technology,” he said. “Those animals perform as good as traditional metaphylaxis, where we give the antibiotic to everybody.”

The value to producers by using this technology is the reduction in the number of animals that receive antibiotics by 40-45 percent.

Whisper On Arrival is a “point in time measurement,” Nickell said.

“It is like a snapshot of that animal’s status at that point in time. The reality is that animal could leave the chute and there’s a lot of things outside of our control from that point on, whether it be the weather, interaction with its pen mates, whether or not it starts eating or a multitude of other cases,” he added.

SenseHub Feedlot features an electronic ear tag that illuminates, making it easy to identify and sort cattle needing attention with less labor and minimal disruption to other animals.

A feedlot in Oklahoma monitored cattle for the market with the ear tag technology and found mortality due to BRD was significantly reduced, compared to typical employee observation.

In addition, the Oklahoma trial demonstrated significant labor savings using the technology. Employees who observed cattle visually entered an average of 18 pens per day, compared with only 5.3 pens per day on average when assisted by SenseHub Feedlot – a 71 percent reduction.

“The technology is like having another employee monitoring cattle 24 hours a day, seven days a week. Even with ‘feedlot’ in the product name, the product also has application in backgrounding/stocker operations or cow/calf operations retaining calves,” he said.

Nickell pointed out that there was a “high likelihood these calves, if not discovered early and treated or if they were treated later or not at all, would underperform for the rest of their life, assuming they did not die.”

Merck Animal Health has received significant interest in the technology from producers, as well as feedlot and backgrounding operators.

Another technology that is geared toward helping cow/calf producers, especially seedstock producers, is a technology called SenseHub Beef

“WithSenseHub Beef, our goal is to improve overall conception because we are being timelier with our artificial insemination (AI) and embryo transfer applications,” Nickell said.

SenseHub Beef is a cow monitoring solution that helps producers maximize productivity and improve breeding decisions. The technology uses algorithms to analyze cow behaviors based on activity, rumination, eating and other key behaviors.

The cow’s ear tag, with a battery life of three years, connects to an onsite reader system that captures information on that animal multiple times an hour.

“We place those readers in a strategic area, like a mineral feeder or a water tank that cows will be coming back and forth to,” he said. “As the individual animal is alerted by the system, the system sends a prompt to the user to communicate that this animal is in heat.’”

The system also gives an estimate of where that cow is in her estrous cycle, which gives her an idea of how many hours she has until she is outside that window of estrous.

“If you don’t catch it until the tail end, you may wait for the next 21-day cycle,” Nickell said.

Other advantages of the technology include fast return on investment, with a shorter calving interval; accurate heat detection, enabling precise insemination timing and optimization of conception rates; a reduction in hormone usage and labor costs; early-stage detection of anestrous cows; a shortened calving season with increased value of calves; and a reduction in the need for backup bulls.

Producers can have the data sent to their cellphones or tablets/computers, so they know when a cow or cows are in heat.

Nickell said there is an internal vetting process for using the technology because they don’t want to overpromise and under deliver.

“We do the vetting internally to see if a site would actually fit within what the system can do today, and we are continually working on the technology to make it more robust,” Nickell said.

Producers who use artificial insemination on certain animals tend to “manage those animals fairly intensely. The day-to-day routines of those animals are fairly consistent. So, in those situations, the system has worked well,” Nickell concluded.

For more information on these cattle monitoring technologies, see https://www.merck-animal-health.com.

The U.S. meat industry broke records with the amount of meat produced in 2022, according to Tim Petry, NDSU Extension livestock marketing economist.

Could goat meat production become a popular option in Montana? Growing interest in the industry is highlighting how ranchers in the state are …

While a calf is in the chute, a producer places the Whisper On Arrival device on the animal’s chest. When the data is analyzed and the readout is “treat,” the veterinarian, on the right, prepares to administer the antibiotic. Courtesy photo.