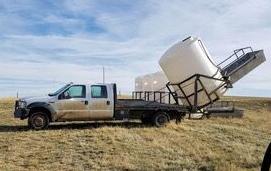 Dave Hayden hauls a portable cattle water system to another pasture on the ranch. 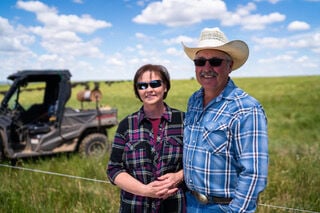 Deanna and Dave Hayden at their ranch near Baker, Mont.

BAKER, Mont. – Dave Hayden’s portable cattle watering system invention brought relief to many ranchers who needed to water their cattle during the extensive drought in 2021.

“We feel like we have been in the target of the drought this summer with hardly any rain,” said Dave, who ranches with his wife, Deanna, along with their son, Chase, and his family, in the southeastern corner of Fallon County.

Dave and Deanna also have two married daughters, Maria Brown and Anita Graham, and they have eight grandchildren.

With little rainfall, there were water shortages to creeks, dugouts, and reservoirs where cattle drink, and producers were looking for something to help them save multiple trips to fill water tanks in pastures.

The portable cattle watering system is “easily moved” with a flatbed, Bobcat, or tractor to wherever the livestock are grazing.

“I have been working on the design for five years, and I finally have improved the design the way I want it,” he said. “I designed it to solve my own issues, but a lot of people became interested in it and wanted me to build them one.”

Dave constructed several and rented or sold systems to other ranchers in 2021.

“Some of the ranchers I rented a system to had the reservoirs on their pastures go dry, and some of them told me they wouldn’t have made it through this drought without the system,” he said.

Some ranchers are using the system so their cattle can graze crop aftermath after harvest.

“It works perfect for that,” Dave said.

The Haydens have been on a soil health journey on their ranch since the late 1980s. They have attended many soil health and holistic grazing workshops, including one with Allen Williams in Baker, Mont., and they have applied the techniques they learned.

All along the way, water was their biggest challenge.

The Haydens used the NRCS EQUIP program to put in an underground water pipeline from a well system on their ranch. The pipe takes the water out to pastures, but the system is not everywhere cattle are grazed on the ranch.

“I came back from a holistic management seminar and decided we would use livestock to improve our hay ground instead of breaking it up with machinery,” Dave said.

They noticed a huge difference in the hay field, and continued improving their grazing techniques.

The Haydens began combining herds, and moving them every 3-4 days, which saved time and money. It also used less machinery, less fuel, and put biology back into the soil with the help of livestock.

For water, initially Dave rigged up a semi flatbed that carried multiple 3,000-gallon holding tanks. He hauled the tanks from area to area.

“It was heavy and created problems when moving it to some areas,” he said.

That was when Dave began designing a more efficient portable cattle watering system.

Dave spoke about his watering system and how he uses electric wire to facilitate grazing at the Soil Health Workshop at NDSU’s Dickinson Research Extension Center in the fall of 2021.

“We use poly wire when grazing and it keeps us flexible that way. Once cattle are trained to it, we can move the cattle just about anywhere using poly wire with step-in posts,” he said.

Their fences are operated with portable solar panels that charge it, and they have been using solar panels for more than 15 years.

“Chase designed an electric fence winder to wind the poly wire on and we use it to do all the electric fencing when the cattle are grazing,” he said.

In 2020, they decided to utilize a high stock density grazing system, following adaptive grazing principles. They grazed a herd of 290 yearlings across an old hay field. They moved the cattle every hour, 12 times a day to a new 1-acre strip.

“Our goal was to get a more even graze, more hoof action, and try to use just 40 percent of the biomass,” he explained.

That pasture was rested until 2021, before it was flash grazed because of the severe drought and grasshoppers, allowing it time to recover for 2022s grazing year.

“The idea is to change the number of head, days grazed, and timing of grazing every year, but continue a significant recovery period,” he said. “We see the value of long rest periods after higher density grazing, so increasing stock density and changing it up has been a new combination for us.”

The Haydens have continued to work to find ways to increase grass production by improving soil health.

“I like to try new things and I am liking the way it is looking around the ranch,” he said. “Our stock density used to be 25-30 acres per cow. Now it is 16 acres per cow.”

Dave also likes his portable cattle watering system that he used frequently in 2021 during the drought. He plans to continue using the system, along with continuing along a soil health path on the family ranch.

Geo-fence technology could be the wave of the future

MALTA, Mont. – Virtual geo-fences may be the wave of the future for ranchers who are looking for solutions to managing intensive grazing with …

As the fourth generation on her family’s ranch, for Katelyn (Kohlbeck) Knebel, raising cattle is about legacy and passion. She follows in foot…

POLSON, Mont. – The Mission Mountains, located in northwest Montana, are as picturesque as they come. Snow-capped peaks stand in stark contras…

Dave Hayden hauls a portable cattle water system to another pasture on the ranch.

Deanna and Dave Hayden at their ranch near Baker, Mont.