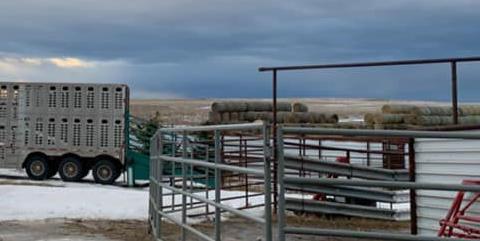 PGC, Top Notch Angus, Kel McC Angus and Whistling Winds Angus bulls are ready and waiting at the PGC feedlot, so everyone can preview them at the Northern Premier Open Corral.

PGC, Top Notch Angus, Kel McC Angus and Whistling Winds Angus bulls are ready and waiting at the PGC feedlot, so everyone can preview them at the Northern Premier Open Corral.

HAVRE, Mont. – The bulls are ready for their showcase at the Northern Premier Open Corral at Peterson Grain & Cattle (PGC) Jan. 11.

PGC, Top Notch Angus, Kel McC Angus and Whistling Winds Angus bulls are ready and waiting at the PGC feedlot, so everyone can preview them before the sale in April.

Recently, the Petersons shipped about 80 calves, mostly steers, to Western Livestock in Great Falls. The calves will be sold at Western’s upcoming feeder sale.

“Jeremy Couch, of Amos Enterprises, helped us load the calves into the semi, and then he hauled the feeder calves to Great Falls,” said Andee Peterson, who operates PGC with her parents, Kim and Nola, brother, Ben, and sister, Casey.

Meanwhile, the Petersons are making preparations for the upcoming calving season.

All their cows and heifers were AI’d last year, with PGC having a 65 percent conception rate, and the remaining 35 percent bred out of their herd bulls.

“We have 70 heifers to calve this year. The heifers will start calving around Feb. 1, with the cows to follow around Feb. 15,” said Andee.

Some of the heifers were sired by Sitz Reload 411C, Janssen Wyatt Earp 5110, and Basin Paycheck 5249. The Petersons are excited about these sires.

“This is the first year we have calved out of those sire groups, and it is always fun to see how the heifers will act, what their udders are like and other mothering qualities they might show,” she added.

Of course, it will also be fun to watch the new calves being born, jumping around the corrals, and bringing new life in mid-winter to Peterson Grain & Cattle.

While the Petersons usually calve in the corral, it is always dependent on the weather.

“If we have nice weather, they calve outside and then the pairs are shuffled into a pasture near the corrals after the calves are tagged, weighed and given their shots,” Andee said.

If temperatures drop below zero, the new calves will go immediately into the barn as they are born to keep them comfortable.

“We have calf huts in the corral and out in the pasture that we call the HorseShoe Pasture. The huts give the calves a place to get out of the wind,” she said. “They are bedded with straw frequently to keep them warm, and to keep them from becoming sick.”

At calving, PGC cows are graded for disposition, udder quality and foot quality.

“The threes are sold the following fall, as we don’t put up with disposition problems,” she said.

The cows’ udders are also graded on a similar system: one (no problems); two (udder can be improved); and three (calf cannot suck without assistance from humans).

“We will grade the feet according to angle and curl,” she said.

If the cow is give a five for angle and a five for curl, the feet are considered perfect.

“The number can go up and down from there,” Andee said. “We will use these grades to help us with selecting which bulls we will AI to each cow in the spring.”

In addition, the scale helps with deciding which cows may need foot improvement or udder improvement, and the cows that were graded as being slightly nervous around humans can be bred to a very docile sire.

Meanwhile, temperatures at the ranch have been fairly warm for mid-winter, fluctuating anywhere from 15-45 degrees above zero in the last couple of weeks.

“Nearly all of the snow is gone except in the stubble fields, which is great because those fields need good cover to protect the crops during the winter,” Andee said.

As usual in the winter, there has been ice to maneuver around, and ice always makes “things a little more challenging.”

“It rained a couple days ago (the first of January), and then froze, and we have not received any new snow,” she said.

Andee’s brother, Ben, has been hauling grain non-stop until the first week in January.

“Benny is now waiting to see if some ice melts off in the farmyard, because he would like to haul more grain, and there is an incline to get to the highway from the bins. With the ice in the yards, it has not been easy to get a loaded semi out of there, at least right now,” Andee said.