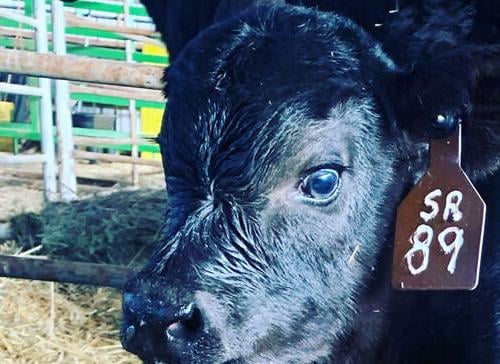 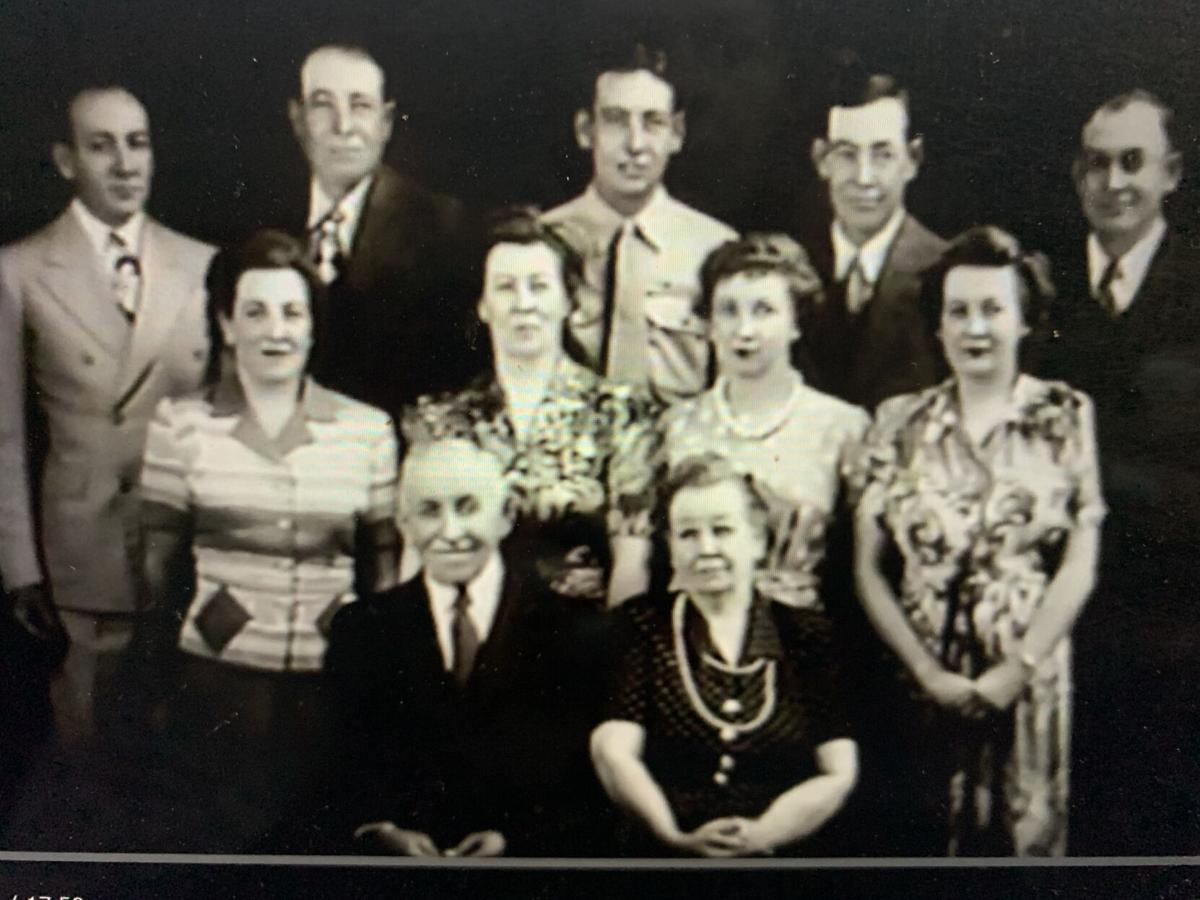 Here is the original Larsen family, and Chet is in the back middle. 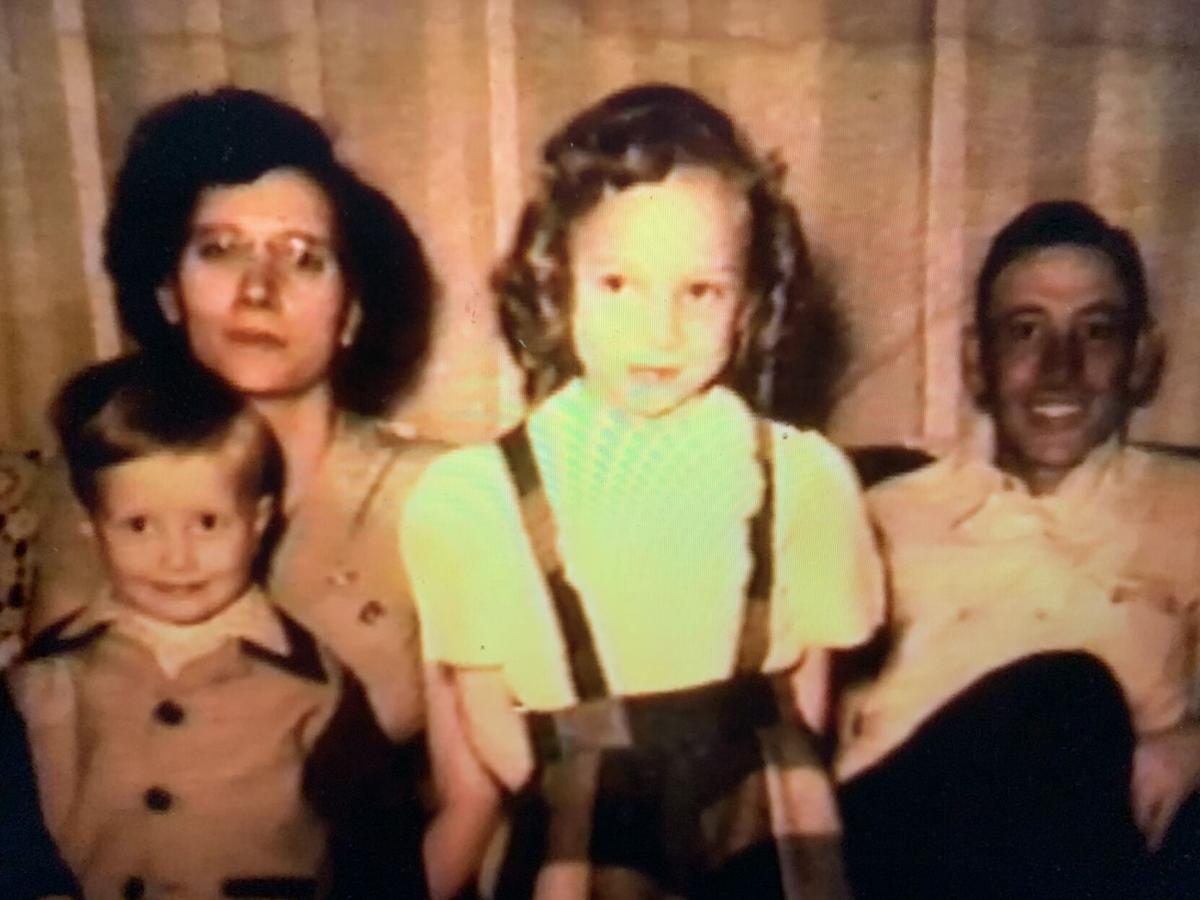 Jim Larsen, at left, as a youngster being held by mom, Jean, and next to Judy and Chet Larsen. Jean came to the Larsen family ranch in 1945, where she and her husband, Chet, lived and worked alongside Chet’s parents. Chet’s brothers, George and Neil, worked on the ranch, too, and his other siblings helped out when needed for seasonal work. Jean will turn 100 this spring.

FORSYTH, Mont. – As cold fronts moved in across Montana during early to mid-February, the temperatures dipped into the below zero range at Larsen Ranch Angus after a mostly mild January.

At the ranch, Jim and Carin Larsen and their adult children and spouses, Wendy and Lafe Warren, Lori Vance, and Tyler and Tisha Larsen, and their families, work together to operate the seedstock and commercial Black Angus business.

The good news is there is snow on the ground. If it sticks around, it could help with moisture in the spring, especially to help with early grazing lands.

“We are having colder weather now, and some days we have seen temperatures drop to around 30 below zero,” Tyler said.

Wendy added that at the ranch, “We have had fun keeping equipment running in the severe cold.”

The bulls in the upcoming March sale, as well as the commercial and registered females, have plenty of bedding in their respective areas. In addition, the herds consume some extra hay to maintain warmth.

“Angus are hardy cattle and are used to bitter cold winters,” Tyler said, adding they handle the weather in stride, which makes them great herd bulls for commercial cattlemen in the Northern Plains.

Tyler said photos of the bulls were taken and the catalog is being put together for the 47th annual production sale on March 22 at the ranch at 1 p.m.

“We are getting ready to video the sale bulls,” he said.

In early February, the calving barn was quickly filling up with heifers that were calving in the colder weather.

“Calving is going well at the ranch. We are calving the heifers and getting ready to start with the cows any time now,” he said.

Meanwhile, Wendy talked to her “Gramma” Jean Larsen, who will be a centenarian this year, about her experiences on the family ranch.

“Jean came to the Larsen family ranch in 1945, where she and her husband, Chet, lived and worked alongside Chet’s parents. Chet’s brothers, George and Neil, worked on the ranch, too, and his other siblings helped out when needed for seasonal work,” Wendy said. “There were a total of nine siblings.”

Jean’s main job on the ranch was cooking, cleaning and doing laundry for the group.

“The Larsens were dedicated to eating at 6 a.m., 12 noon, and 6 p.m. There were no cell phones in this era, so the easiest way to know the time was to know what time the next meal would be ready and when to be at the table to eat it,” she reported.

Chet’s brother, George, had a favorite saying about mealtime.

“George would always say that a meal is never better than when it is right off the stove,” she said.

The only changes to the family schedule and eating times would be during harvest and haying.

“Jean and Gramma would take a snack at 10 a.m. and 4 p.m. during those times, and push back dinner to 8 p.m. Jean said she remembers the guys talking about coming in to eat even if they had one round left of farming to do,” Wendy reported. “They would stop, come eat, and then go finish up. It was a big deal to be on time for the meal preparers as the hungry men were coming in from working.”

“They would start cooking with wood, but use coal the rest of the day for heat and meals. The coal was purchased in Roundup,” Wendy said.

When the ranch started, there wasn’t any electricity or running water at the ranch.

“They had a hand pump from a well they used right outside the house,” she reported.

Jean said that laundry was always a “huge chore,” with lots of bedding and clothes to wash and hang dry, along with taking time out to darn socks and mend overalls.

“Jean would do the sewing weekly and everyone knew where to throw the socks and overalls to have her fix them,” Wendy said.

Cleaning was also a “big job,” on the large ranch.

“Jean remembered that the windows always needed to be clean. She would use a cleaning solution called ‘Bon Ami’ powder cleaner to clean the windows. It is a powder that can still be purchased today,” Wendy reported. “Jean began cleaning windows for her Mama when she was about 8-years-old.”

All of the Larsen siblings lived close enough to come to the ranch to eat dinner on Sundays after church.

The tradition continued as long as Grandpa and Gramma Larsen were living, but it lessened somewhat after they passed away.

“During this time, they would eat a big meal together and play pinochle for hours,” she said.

Independence Day was a special time on the ranch, as all the neighbors would show up on the ranch for a potluck meal, Wendy said. A favorite treat served was some delicious handmade ice cream.

For fun, Chet and Jean loved to dance.

“They went every Saturday night with a group of friends to the Forsyth County Club,” she said. “Every week there was a different committee that set up the band and food. They also square danced for seven years. Square dancing took them outside of the county to other communities on various weekends,” Wendy reported.

Jean says that life “was much different” than today with all the modern appliances that ranch women can now use to finish housework and laundry quicker.

Unfortunately, there are fewer opportunities for square dancing these days.

“Jean said she didn’t know if what she did as a young women on the ranch was fun or just what you did,” Wendy said. “Gramma Larsen will turn 100 on April 9, 2021, and we plan on having a celebration for her in Forsyth.”

For more information on Larsen Ranch Angus, see their website at www.larsenranchangus.com.

DELL, Mont. – The second week of February saw a bitter cold front work its way across Montana. Sub-zero temperatures of varying severity made …

SPRINGDALE, Mont. – Like most Montana agriculturalists, Jim Felton was enjoying the mild winter the state had been experiencing. However, the …

Here is the original Larsen family, and Chet is in the back middle.

Jim Larsen, at left, as a youngster being held by mom, Jean, and next to Judy and Chet Larsen. Jean came to the Larsen family ranch in 1945, where she and her husband, Chet, lived and worked alongside Chet’s parents. Chet’s brothers, George and Neil, worked on the ranch, too, and his other siblings helped out when needed for seasonal work. Jean will turn 100 this spring.