A beautiful sky over one of the Merriman’s fields. 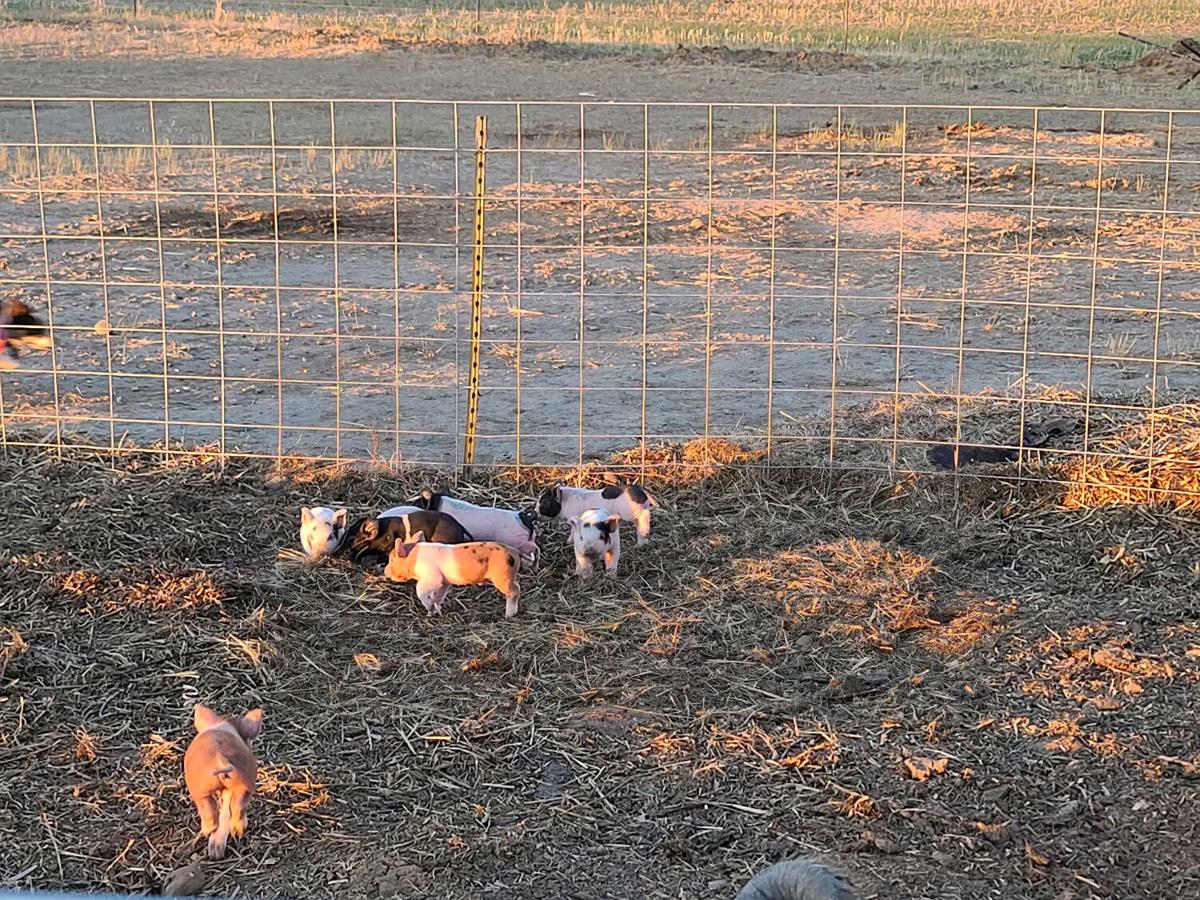 The piglets from the sow on the Merriman farm are growing. While these are too young for the fair, the Merriman kids are taking pigs they have raised to the fair in Phillips County.

MALTA, Mont. – The Merriman’s yearlings are grazing out at the Matador Ranch as temperatures in the region dropped slightly in the mid- to high 80s.

“It’s a lot better than the 90-100-degree days we had in July. It is either cooling off or we are getting acclimated to the heat. But we haven’t had any rain yet,” said Cliff Merriman, who operates 4M Farms with his wife, Anna, and kids, Beau and Courtney.

The family goes out to check on their pairs often, bringing cake.

“We use Redman Salt and Sweet Pro, which has garlic in it to help with flies,” he said.

Cliff points out he and Anna have worked hard over the years to have a cow/calf operation of their own. While the yearlings graze at the Matador Ranch, their cow/calf pairs graze at the home farm/ranch.

In 2013, when the family began farming, the Merrimans did not have their own cowherd.

“When we began farming, cows were on an upswing in value and cost a lot of money. They kept increasing in value, and Anna and I could not afford our own cows at first,” he said.

Instead, they raised cover crops for custom grazing. Other cattlemen brought their cattle to graze, and the Merrimans received a lease fee.

“We’ve always integrated livestock with our cover crops; we just couldn’t capitalize on the true value of the livestock until the last couple of years,” Cliff said.

They were anxious to have their own herd, so they “scrimped and saved” wherever possible. Sometimes, Cliff could trade custom farming for a heifer or hauled grain in trade for a heifer.

“We were working on putting together our own herd,” he said.

The bank loaned them enough to buy 30 short-term cows (older cows in the twilight years), and a friend went in with the Merrimans to buy some more. Most of those cows had one more calving season and would produce a calf.

“We’d buy those short-term cows and sell them the next year to pay off the bank note and keep the heifer calves,” he said.

The best replacement heifers they kept for their own herd and the other heifers and steers were sold.

“Last year, we kept 10 heifers, and this year, we are hoping to keep 30 heifers,” Cliff said. “That is how we have put together our own cow herd. This year, we have 75 mama cows, along with our 50 yearlings on the Matador.”

“Our landlord, Dale Veseth, a seedstock Red Angus breeder who owns Veseth Cattle Co., and has a great bull sale every year, wanted some of Apprentice’s semen, so he bought some and AI’d some of his cows up here in Montana with it,” Cliff said. “We bought every Beefmaster/Red Angus cross heifer out of that AI group.”

The Merrimans got 10 heifers out of that group.

“Those heifers have made some beautiful mothers. They have produced well,” he said.

Once the Merrimans had their own cows, Cliff’s grandfather gave them a Beefmaster bull named “Captain Britches” and eight Beefmaster full-blood cows.

“We went down to Texas and hauled them home, a 1,600-mile trip. We really appreciated Grandpa doing that for us,” he said. “We have two Red Angus bulls and our Beefmaster bull. The Beefmaster bull had the most calves last year.”

“We’ve been grazing our own herd on cover crops from the very beginning,” Cliff said.

He decides what cover crop mixes they should grow for certain reasons.

“When we plant our cover crops, it is a very specific mix to what either our cows or our soils need,” he said.

For instance, there are some soil factors that can be addressed with cover crops, such as nitrogen.

A straight sweet clover cover crop is great for fixing nitrogen, but not so great for grazing.

“If you aren’t paying close attention to the stage the sweet clover is in or the livestock’s dietary needs, you could kill a cow with straight clover,” he said.

The Merrimans have also seeded rye, a winter annual, with clover for a mix that is an “aggressive cover crop mix.”

“The next year we don’t touch the field and we get a tremendous flush of volunteer rye, which makes a really great cattle feed,” Cliff said. The rye is great for killing off rogue volunteers and weeds.

Meanwhile, the Merrimans are preparing for the Phillips County Fair in Dodson, Mont. The fair started in 1915 and is the longest continuous running fair in Montana.

“We have four pigs that we raised that Beau and Courtney are taking to the fair this year for 4-H,” Cliff said. “They have been practicing their showmanship, working with the pigs, and filling out their 4-H books.”

CUSTER, Mont. – When hearing the term “cowboy” it is easy to conjure up images of John Wayne, Tom Selleck, and Sam Elliott – men who brought t…

COHAGEN, Mont. – Traveling north out of Miles City on Highway 59 into the heart of Montana’s short grass country, the landscape is a visionary…

A beautiful sky over one of the Merriman’s fields.

The piglets from the sow on the Merriman farm are growing. While these are too young for the fair, the Merriman kids are taking pigs they have raised to the fair in Phillips County.