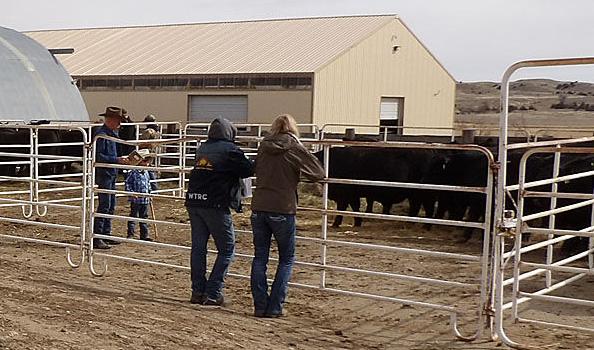 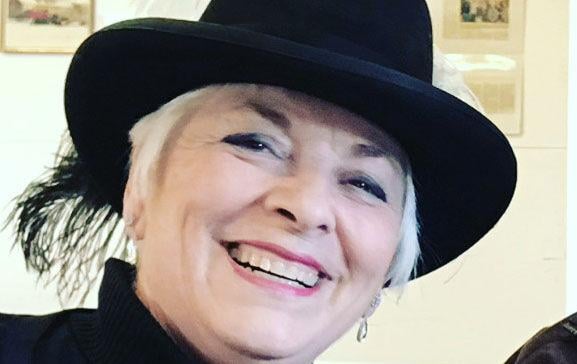 Carin Larsen worked the clerking table during the sale. 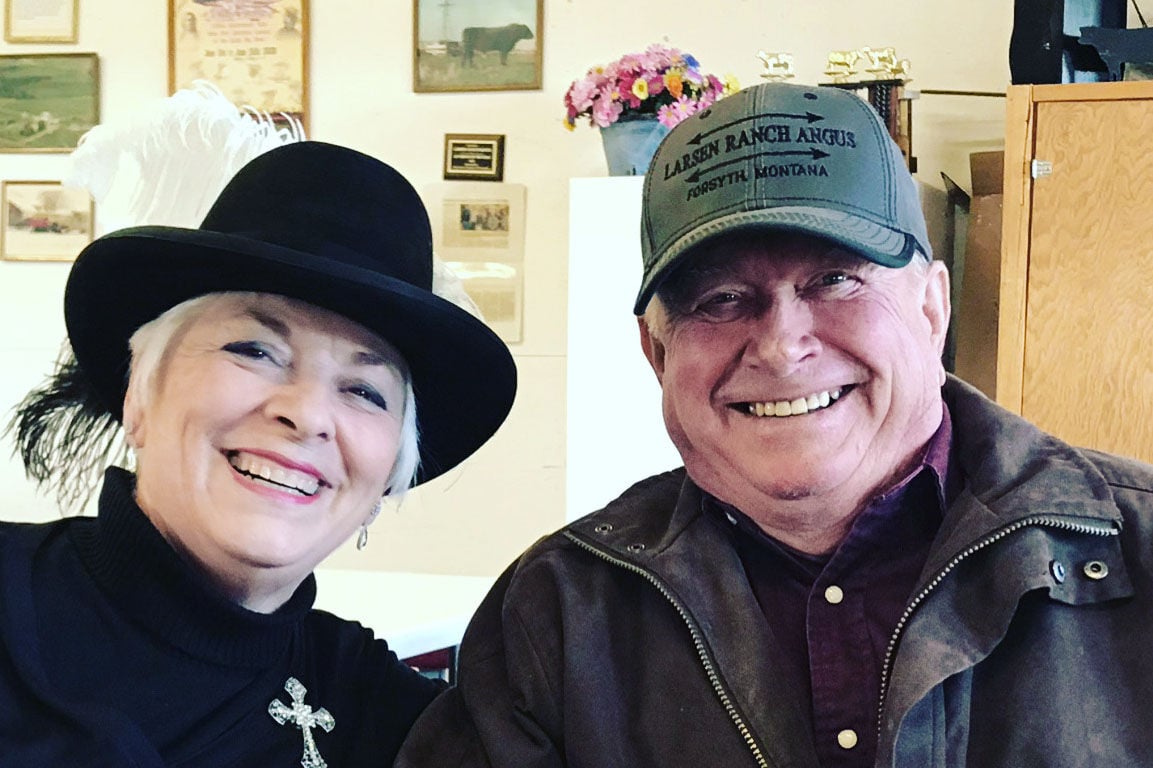 Carin and Jim Larsen had a successful bull sale this year. 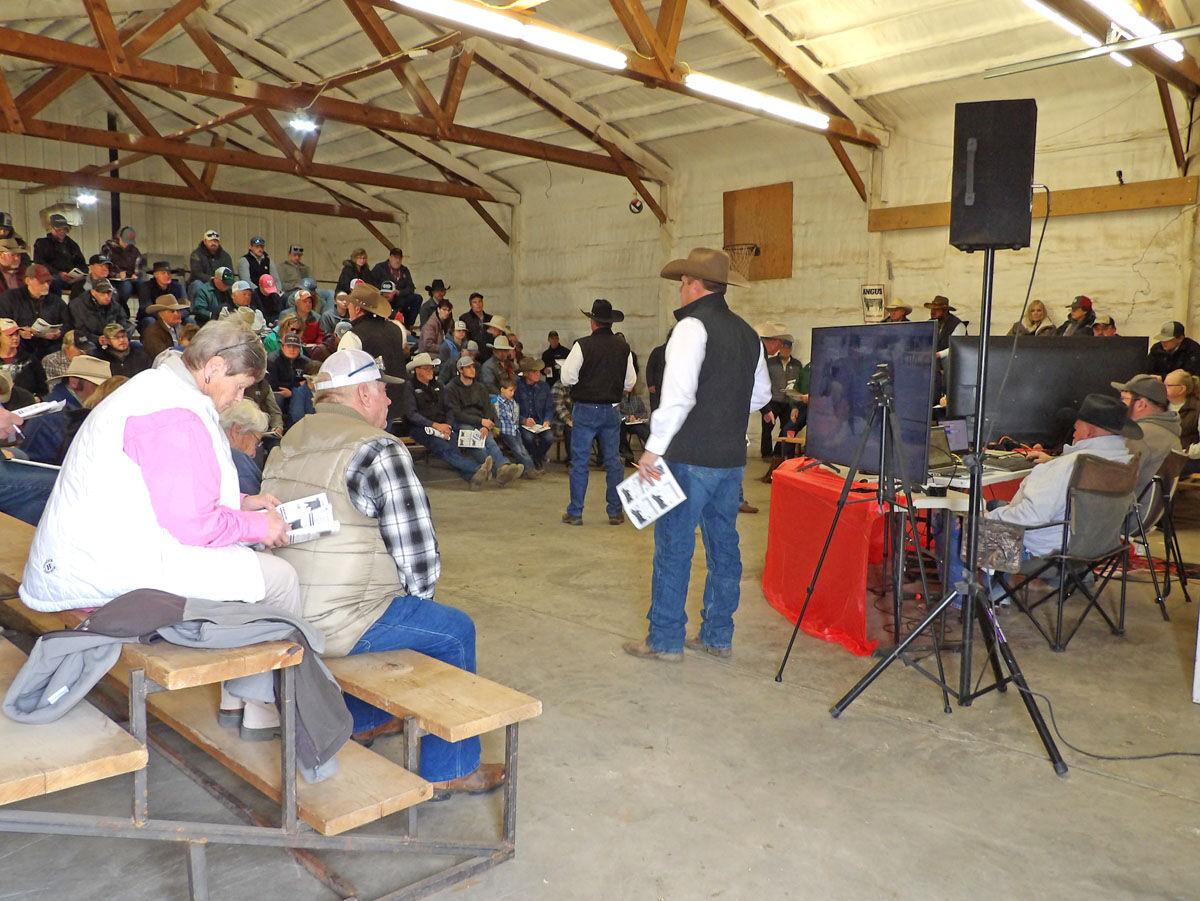 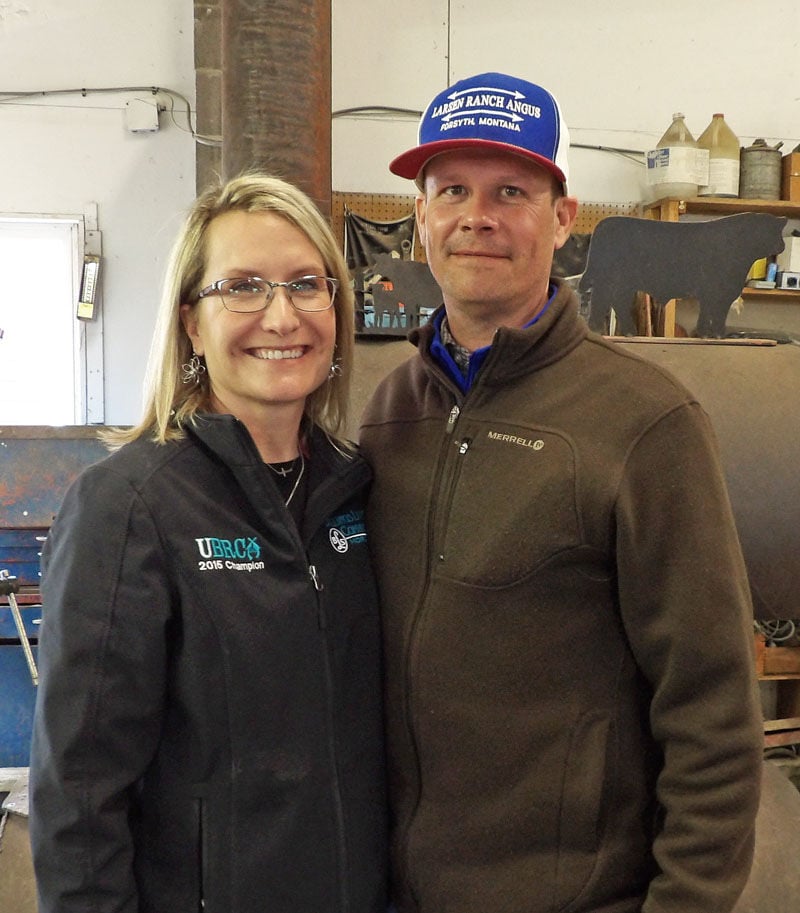 Tisha and Tyler Larsen at the bull sale.

FORSYTH, Mont. – A year of work developing seedstock Angus bulls for commercial cattlemen came to fruition for the Larsens at their 47th annual production sale on March 22.

“Our bull sale went well,” said Wendy Warren. “Bull buyers were there early viewing the bulls and talking to Lafe, my dad (Jim) and Tyler about the bulls.”

Held at the ranch, Jim and Carin Larsen and their adult children and spouses, Wendy and Lafe Warren, Lori Vance, and Tyler and Tisha Larsen, as well as their families and friends, worked together at Larsen Ranch Angus to produce a successful bull sale in eastern Montana.

“We had the second highest number of bull customers bidding on bulls since our production sales began,” Wendy said.

Earlier, Forsyth FFA members arrived at the ranch to help set up the barn and pens for the sale.

“We asked the FFA members to come and help us set up and we really appreciate their help. They also came back the day after the sale to take everything down and put it away,” she said.

FFA members set up 11 pens for the sale bulls, and on the morning of the sale the Larsens moved all the bulls into the pens.

“We label each pen with the lot numbers of the bulls so that the bull buyers can look at them live before the sale starts,” Wendy said.

The FFA members also helped set up tables and chairs for the luncheon and three sets of bleachers for the sale inside the sale barn.

Wendy explained that the large sale barn is divided into two sections – an enclosed area to sit down and eat lunch on one side, separated by a door, and the actual bidding area.

Inside the sale area, Frontier Live, which broadcasted the auction and took bids over the internet, set up TVs for the sale. There were eight bidders bidding on bulls over the site during the sale.

“In the morning, my nephews and a cousin were playing basketball in the sale barn and I had to shoo them out when they brought in the TVs,” Wendy said, with a laugh. The sale barn has a basketball hoop set up for the kids to play during the year.

“Lori, Tyler, and I used to play basketball in there when we were young,” she added.

In addition to the basketball court, farm and ranch implements are stored in the barn to keep them out of the elements during the winter. Those machines had to be moved out ahead of getting the barn ready for the sale.

The day before the sale the Larsen women prepared food for the luncheon.

“Carin, Tisha, Lori, Tisha’s Mom and her sister and I made a lot of the food for the luncheon at the sale,” Wendy said.

On sale day, all the families were up early and preparing for a busy day at the ranch. The bulls were fed and watered while bull customers pulled up in trucks and trailers to view the bulls and make final decisions about their purchases.

The Larsen women set up the coffee and spudnut table right away so bull buyers could talk about the bulls and enjoy refreshments.

“It was fun to watch. Bull buyers would come by and put their hand in (to grab a spudnut) and come back again and again,” Wendy said.

The women also set up for the luncheon, which was roast beef with side dishes, and some of the FFA members helped with serving it.

“Most of the bull bidders crashed the lunch counter ahead of the sale,” she said.

The bull sale was fun and active, as bids came in fast with Roger Jacobs as auctioneer, and others helping take bids.

“It was a good sale and we appreciated all the bull buyers who took time to come out and bid on bulls,” Tyler said.

The Larsens will deliver the bulls within 350 miles of the ranch.

“Some took their bulls home right away, and for others we will deliver to their homes,” she said. Wendy goes along on bull delivery trips with Lafe if it is on a weekend when she isn’t working at the BLM.

At the Larsen ranch, calving season is finishing up, and planting and haying season are just around the corner.

The Larsens always have a few projects they hope to complete each spring. They will be repairing fence, preparing to move cattle in groups to pastures around the large ranch, and they have equipment to maintain and get ready for the spring and summer, among other projects.

Out in their fields, the Larsens have winter wheat and winter spelt in the ground. They also plan to seed oats and barley hay, and also have alfalfa and grass hay fields to maintain.

“We have already seeded half of the barley hay so far,” Wendy said. “We grow winter wheat that we take to the elevator each harvest, but as a ranch, we are more into raising feedstocks and hay for our cattle during the winter, and keeping our pastures in good condition.”

They grow some of their crops and hay dryland and some under pivots to take advantage of irrigation.

“We have made use of as much irrigation as possible around our ranch,” she added.

In the summer, haying will be a major project for the families.

“We put up a lot of hay bales for winter feed,” she said.

Looking ahead toward the future, the Larsen families will continue their stewardship of the land and animals in order to keep the generational farm/ranch in the family.

“We have the mindset with our seedstock bulls to produce the best bulls for our customers. Tyler and Lafe try to create a diverse set of bulls each year,” Wendy said.

The Larsens have built good relationships with their bull customers and with the Forsyth community.

“We are part of a great community in Forsyth and we always want to help out where we can,” she said.

For instance, parents with kids in the Forsyth Public School wanted to have fresh beef in the schools, so after a school board vote allowed that to happen, the family donated beef right away. The Larsens also donate to a scholarship fund for the Forsyth FFA to help support the program.

They will have birthday cake and refreshments, and afterward, the family will gather together at Jean’s home in Forsyth to visit.

“Grandma Jean is very excited about it. She must have sent out about 100 invitations for the open house, and also put it in the local paper and on our Facebook page,” she added.

Wendy also wanted to thank the readers who took the time to read about the Larsen’s ranch this year.

For more on Larsen Ranch Angus, see the website at www.larsenranchangus.com, or see their Facebook pages for photos of their production sale.

As this is the Larsen’s last report, The Prairie Star would like to sincerely thank them for showing us their family operation this winter and taking photos for our readers. We enjoyed seeing how the families work together and wish all of them the best of luck in their future endeavors.

HELENA, Mont. – Founded as a gold camp in the 1860s, Helena is a city rich with Montana history. It became the territorial and eventual state …

LEDGER, Mont. – Growing up on a family farm in the heart of Montana’s Golden Triangle, Cassie Andrews learned to do it all right alongside of …

Carin Larsen worked the clerking table during the sale.

Carin and Jim Larsen had a successful bull sale this year.

Tisha and Tyler Larsen at the bull sale.