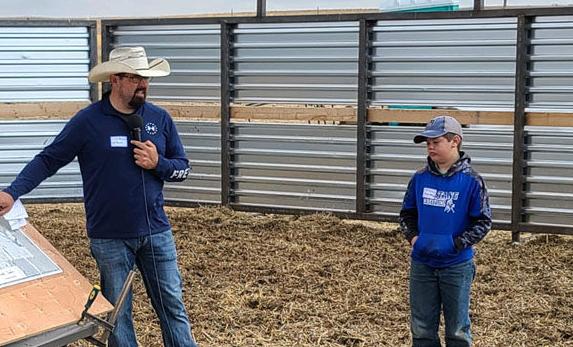 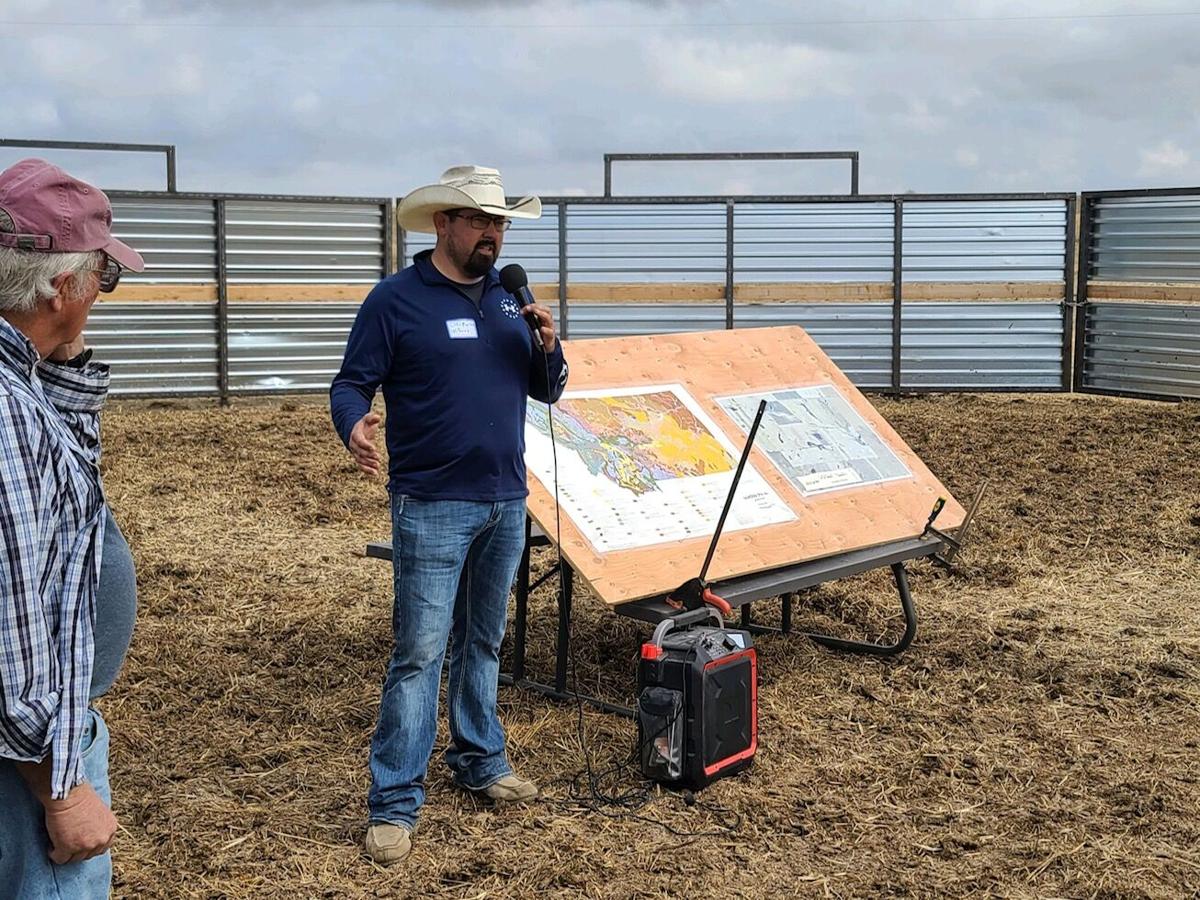 MALTA, Mont. – The Merrimans hosted a nice organic farm tour last week at their farm. They took organic producers and Montana Organic Association officers and members around their farm, showing them their crops, their rotation and the integration of livestock and cover crops.

“I was happy with the turnout. It was a cooler day - the one day we had in the 80s, so it wasn’t as hot. It was a nice tour,” said Anna Merriman, who operates 4M Farms with husband, Cliff, and kids, Beau and Courtney.

Cliff said they talked “about soils and our cropping rotations, weeds, such as bindweed and Canada thistle, the drought and the grasshopper influx.”

The Merrimans went to their mustard fields with the tour participants. On the way, they pointed out their livestock that were grazing in the cover crops.

“We took them out to our mustard fields to demonstrate “how rough the year has been. Our mustard is totally done. Where it came back up, the grasshoppers ate most of it to the ground.”

Grasshoppers and the drought were discussed at length since there have been so many Montana farms and ranches in the region inundated with the insects this summer.

Discussion on the tour about the hoppers included the fact that there was nothing “that any of us could have done about the hoppers. When the hoppers hit that level countywide, there were just too many of them to even start spraying. It would just be a waste of money.”

During the tour, Cliff talked about the soils in the area where they farm. Their farm now sits on an area where glacier used to be millions of years ago in the last ice age.

“When it melted, it eroded the soils in the area,” Cliff said. “Our soils in this region are mainly aridisols, but we also have mollisols on our farm, as well.”

He had an old NRCS map display to visually demonstrate the classification of the soils in Montana.

“I had a map at the tour stop that showed all the soil taxonomy in Montana,” he said.

Cliff said their farm sits on a dividing line between aridisols and mollisols. The mollisols tend to make the best farmland, with soils that are high producing.

“We manage for saline, such as using a salt-tolerant crops like alfalfa and safflower. It is important to know your soils so you don’t plant the wrong crops,” he said.

During the afternoon, the Merriman’s son, Beau, who is 9-years-old, helped Bill Pelton, owner of Bill Pelton Livestock, LLC, with his low-stress livestock handling clinic at the Milk River Pavilion in the afternoon.

“We brought in 12 yearling donated by Barthelmess Ranch for the clinic and set up a panel with a Bud Box design, a raceway (alley) and a loading chute,” Cliff said. He explained the Bud Box is a design created by Bud Williams, a well-known livestock handler, that sets up the fences, gates and chutes in such a way that it reduces stress, increases workability, and speeds up the process of working livestock.

According to Cliff, the Bud Box helps with “moving cattle in a low stress way to get them where you want them to go.”

“The Bud Williams style relies on educating the (ranch helpers) people in low-stress livestock handling skills so they are knowledgeable to handle livestock in a low stress efficient manner,” Cliff said. “It doesn’t require an expensive facility to do it, and is more for regular ranchers.”

Cliff said Beau ran the chutes for Bill and walked cattle up the alley.

“There is a certain way you pressure and release livestock to go up the raceway, and Bill explained everything he was doing and everything Beau was doing,” he said. “It worked out really well and Beau did a great job, too.”

At the Matador Ranch, where the Merrimans run their yearlings, there is a requirement to attend one low-stress livestock handling clinic every two years.

“This livestock handling clinic qualified for that certification. And while Bill there, he also certified all of us in Beef Quality Assurance, so that was great,” Cliff said.

MOA officials at the tour included Becky Weed of Belgrade, Sam Schmidt, parliamentarian, and others. Cliff is the vice chair.

“Becky actually stayed with us the night before the tour,” he said.

The intense heat stress in the region has not let up over the past couple of weeks.

Cliff said the heat, drought stress on plants and forages, and grasshopper influx has been getting worse in the area.

“We have had several 90-degree plus and 100-degree days in a row, and the hoppers are eating anything green,” he said.

A few days after the tour, the Merrimans received some moisture during a hailstorm on their acres 60 miles away that had the nicest spring wheat on their farm.

“The wheat crop that was there got hailed out,” he said.

Unfortunately, the wheat was their best chance for a crop this year.

HELENA, Mont. – Since the second week of June, Joe Dooling has pretty much been haying non-stop. Hundreds of acres and three cuttings later, t…

LEDGER, Mont. – The Montana seasons seem to be the most defined within the state’s Golden Triangle. Early spring shows shades of brown with ju…

LEDGER, Mont. – As September gave way to October, the leaves weren’t the only thing changing across Montana’s Golden Triangle. The pace of eve…

HELENA, Mont. – As summer melts into fall across the Helena Valley, life continues to march on for Joe and Julie Dooling of Cedar Creek Land a…

MALTA, Mont. – The Merrimans have been busy with fall work at Merriman’s 4M Farms, with the weather cooling down – at least in the mornings.