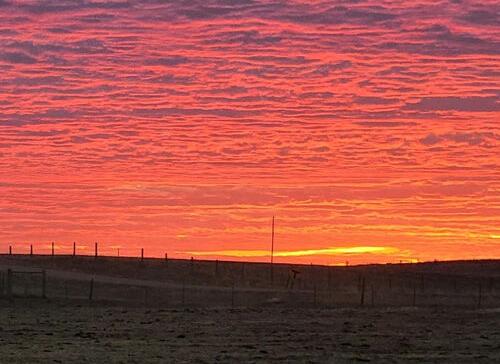 A sunset overlooking the Merriman farm in Malta, Mont. 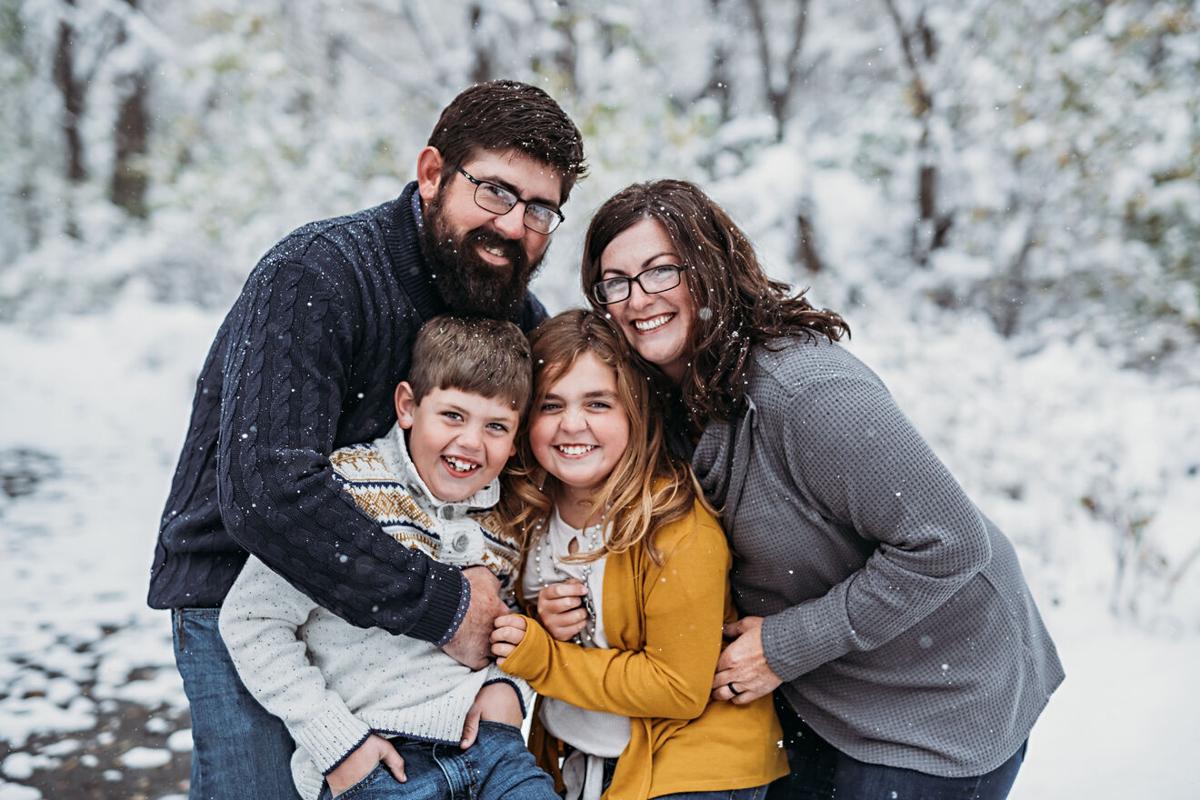 Cliff and Anna Merriman have fun with their kids, Beau and Courtney.

MALTA, Mont. – Long days and late evenings have been the story at 4M Farms over the past couple of weeks as Anna and Cliff Merriman work to finish planting spring crops and continue feeding and caring for their livestock.

“We’ve been very busy planting and moving equipment ahead of the rain expected Thursday (May 20),” Anna said.

That rain turned into a cold, drizzling rain/ice event, with temperatures dropping into the 30s overnight, Cliff reported.

“Last night, we got about an inch of rain, along with a bunch of freezing snow. There’s ice on the ground this morning,” Cliff said on Friday, May 21.

It was quite a change from the two days preceding the freezing rain, where temperatures were in the 80s, even reaching as high as the low 90s, and the days were more spring-like.

However, Cliff didn’t expect the cool temperatures/frost to affect the crops. In fact, he hopes the cold will kill off some pesky insects that have been invading the fields this year.

“We have had a hatch of grasshoppers here recently, so we’re hoping this cold, wet weather will kill them off,” Cliff said.

With planting, Anna and Cliff are finishing up pre-tilling and planting. Anna runs the pre-tiller ahead of Cliff, who operates the air seeder.

They planted a variety of yellow mustard that is contracted with Montana Specialty Mills.

For wheat, the Merrimans are seeding WB-9377 hard red spring wheat. It is a solid stem variety for sawfly resistance, and is rated at the top of the list for strong test weight and standability.

“It’s the first year we have used it,” Cliff said. “We like the fact it’s supposed to be a good milling variety with high protein and good test weight.”

The safflower they are putting in is an organic variety from the Oil Barn in Big Sandy.

For the grazing crop, the Merrimans seeded a cover crop mix of peas, millet, barley and oats for their cow/calf pairs to graze during the summer.

“We’ll set up temporary fencing and graze it all summer long,” he said.

If there is extra crop beyond what is needed for grazing, they may hay some of it.

Cliff said that even though there is plenty of work out in the fields to do every day, they start out their days with feeding all the livestock.

Cliff hauls out bales of hay to supplement the cow/calf pairs out grazing on some intermix tame/native prairie grass mix.

“We’ve been feeding them a bale of hay until the cover crops are ready for grazing,” he said. “We have some alfalfa hay and rye hay and we switch it around.”

Their yearlings have been grazing at the Matador Ranch since April.

“We’ll preg-check them in September and sell the dry ones. We’ll bring the bred heifers home in November,” he said.

The Merrimans had an unfortunate accident

with the turkeys and the coop. A heating lamp was knocked over in the turkey coop and started a fire.

“I happened to be at the house and we could see the smoke. It was just starting to burn, but there was a lot of smoke,” he said. Fortunately, Cliff was there in time to save the coop.

Out in the fields, the earliest-seeded crops are germinating and popping out of the soil.

“Our mustard is coming up and so are the cover crops,” he said.

Cliff hasn’t been out in the early spring wheat fields, but he expects some of the wheat is also emerging.

Meanwhile, the Merrimans, who are members of the Montana Organic Association (MOA), with Cliff as vice chair, are preparing their farm for the MOA tour. The Merrimans are hosts of the event at their farm on July 6, from 8 a.m. to 5 p.m. Sponsors are the MOA, Montana Wheat and Barley Committee, AERO and Organic Montana.

For more information on the tour, see: https://montanaorganicassociation.org.

MALTA, Mont. – Up in the northeastern region of the state, the Merrimans recently finished seeding their spring crops under blazing hot temperatures.

HELENA, Mont. – They say the weather in Montana can be anything but predictable, and it seems the month of May has been a true testament to th…

LEDGER, Mont. – Early summer on the Montana prairie is one of the prettiest times of year. Mile after mile of greening waves of grain seem to …

A sunset overlooking the Merriman farm in Malta, Mont.

Cliff and Anna Merriman have fun with their kids, Beau and Courtney.