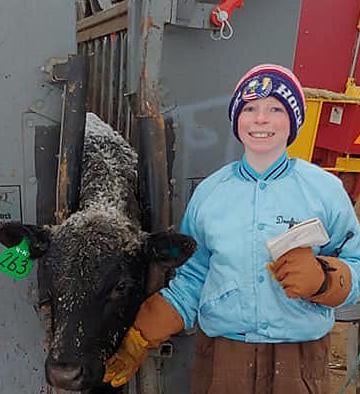 Koby Preputin, a 4-H member, came to Peterson’s to pick out his 4-H steer to raise for the county fair. 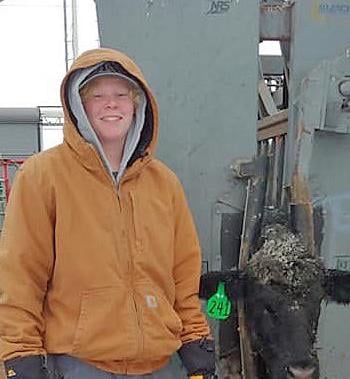 Stephen Preputin, a 4-H member, with the Peterson steer he picked out to raise for his 4-H project.

Koby Preputin, a 4-H member, came to Peterson’s to pick out his 4-H steer to raise for the county fair.

Stephen Preputin, a 4-H member, with the Peterson steer he picked out to raise for his 4-H project.

HAVRE, Mont. – At Peterson Grain & Cattle, where blue skies with clouds have given the family a breather from the wintry weather, all the seedstock Black Angus bulls in the sale have arrived and are settled in.

“The weather has been fairly nice. We received another 4-6 inches of snow last week and it has mostly melted off due to some warmer windy days,” said Andee Peterson, who ranches with her parents, Kim and Nola, sister, Casey, and brother. “However, we did receive another six inches of snow last night (Dec. 7).”

The Petersons are hosting the Northern Premier Open Corral at the Peterson Grain & Cattle feedlot on Jan. 11, from 11 a.m.-4 p.m. It will be a good opportunity for those interested in a great herd bull to stop by the ranch and look over the offerings.

“Everyone is invited to stop in for lunch, beverages and view the registered Black Angus bulls,” Andee said. “We plan to have preliminary bull data available on the bulls for anyone to take home.”

Any previous bull buyers or others interested in The Northern Premier Angus bulls are welcome.

The Petersons have started working on their upcoming bull sale with advertising, and of course, the upcoming Northern Premier Open Corral.

They earlier selected the seedstock Black Angus bulls they wanted in the sale after the bulls were weaned, but three other Angus breeders will be part of the sale, as well.

They recently brought their bulls into the Peterson lot, where the bulls will stay until sale time.

“Top Notch Angus and Whistling Winds Angus delivered their own bulls to the feedlot via horse trailers, and we all pitched in and helped them unload,” Andee said. “It was a quick and easy process.”

Keith Cowan, Kelly’s nephew, brought the KelMc Angus bulls in by semi-truck, and everyone came out and helped him unload their bulls.

Peterson Grain & Livestock has a great setting for their bull feedlot. With the beautiful Bear Paw Mountains in the far distance, the large feedlot is situated on a slight slope, perfect for good water drainage.

“The bulls are separated into three pens – anywhere from 50 to 80 bulls in each pen,” she said.

There are five large feed pens altogether, along with six smaller pens that are used during calving and working cattle through the barn.

An alley that is nearly a quarter of a mile long runs along the west side of the pens. The tractor can pull the Supreme Total Mixed Ration (TMR) along the alley to feed the bulls each morning.

Early in the morning, when the sun peeks out and starts to rise, when the dogs are up and ready to run and small birds flutter across the landscape, Andee or Kim are already out preparing to mix the rations for their bulls and the rest of the livestock.

“We use a Supreme TMR mixer to mix grass alfalfa hay, triticale hay, corn, pea screenings, and add mineral from West Feeds to that,” she said. Some of the feed comes from their own farm fields. For instance, they grow the hay for the rations.

Ben, who does most of the crop farming, also helps with feeding when needed, and he is around to help whenever Andee and Kim need help with the livestock.

“Ben is usually the one who goes to get the corn for the feedlot,” Andee said.

The Petersons spend a good amount of time each morning making sure that the rations for all the livestock are ready to go.

“We are currently making three different rations every day, one for our heifers and steers, plus two different bull rations,” she said. They adjust the feed if there is a need to with colder weather or because of consumption.

The Supreme TMR has a scale to measures out the exact ration with the right nutrients in it that each pen should have.

It pulls up and empties the feed into the mangers in each pen.

They have an energy-free waterer in each pen, purchased from CGI in Havre, Mont., which are insulated by the ground temperature.

Meanwhile, in a couple of weeks, the Petersons will weigh the bulls again, as they do monthly.

At the same time, the bulls will be due for a Fusoguard booster shot and a pour-on.

As the Petersons prepare for their bull sale, they have Ben Van Dyke lined up to trim the bulls in February, while Dr. Roger Baxter will fertility test the bulls in March.

For as long as possible, the Petersons cows and bred heifers are staying out on fall pasture. There is plenty of good grass out there.

Another bout of snow was forecasted during the weekend of Dec. 7-8.

Ben hoped there won’t be a lot of snow, because he was in the midst of hauling December contracted winter and spring wheat to CHS in Havre. The Peterson’s good friend, Jordan Lewis, who helps during harvest, went along and helped with hauling grain.

“Ben has about 15 days of hauling ahead of him,” Andee said. “They can get about eight loads to town and back in a day with the two semis if the weather cooperates.”

After they are done hauling wheat, Ben and Jordan plan to haul peas to either Chinook or Chester, which is approximately an hour from the farm either way.

“This time of year, Ben is in the shop, doing maintenance on machinery and preparing the cropping rotations for the next season,” she said.

Meanwhile, Stephen and Koby Preputin came to pick out 4-H steers that they will raise to show at their county fair next summer.

“This is the third year they have bought Peterson Grain & Cattle steers,” Andee said. “In addition, last May they both bought a PGC bred heifer for a breeding project, also for 4-H.”