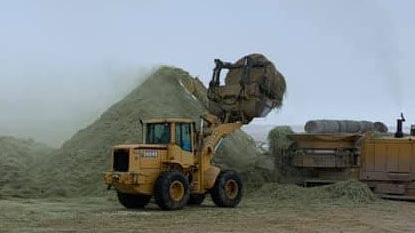 Roy Weikum from Valier comes out to PGC to help chop hay for the herd.

Roy Weikum from Valier comes out to PGC to help chop hay for the herd.

HAVRE, Mont. – New and returning bull customers had a mild winter day to enjoy visiting and seeing the hardy, seedstock Black Angus bulls that were the highlight of the Northern Premier Open Corral at Peterson Grain & Cattle (PGC).

The Petersons seemed to have picked the right day for the event, Jan. 11, with temperatures staying in the double digits above zero for the bull showcase.

“The showcase was a success, held on the last nice day we had that week - 24 degrees above zero - before temperatures started to get colder,” said Andee Peterson, who operates PGC with her parents, Kim and Nola, brother, Ben, and sister, Casey.

Andee said there had a good mix of new bull customers and returning customers show up to look over the 188 bulls from PGC, Top Notch Angus, Kel McC Angus and Whistling Winds Angus.

“We had a really nice group of people come, and it was nice seeing and visiting with everyone,” Andee said.

Bull customers and their families walked through the pens of bulls, as they were starting to make decisions about a herd bull or bulls they might want for spring.

“Everyone looked at the bulls and had a great time visiting and eating,” she added.

“We also have sons out of our herd sires,” Andee said. “We do not have a favorite sire group, but all our bulls look great this year.”

PGC, along with the other Angus seedstock operations, will hold their 14th annual Montana’s Northern Premier Angus Sale on Thursday, April 9, 2020 at Bear Paw Livestock in Chinook.

“This is our 14th annual sale and last year’s sale was a definite success, we are so thankful for our loyal customers/friends and our new customers as well,” she added.

Meanwhile, January’s arrival has brought some freezing cold temperatures, along with a couple inches of light snow.

“It has been really cold since Sunday (Jan. 12), with the low temp at 32 below zero – and even colder if you consider the wind chill,” Andee said. “The highs last week stayed well below zero. We are really looking forward to next week when temperatures are suppose to rise above zero again.”

With the cold temps and the elevator plugged, Ben was not able to haul grain this week. Ben and some farm friends of his went to the MAGIE show in Great Falls, and had a great time viewing farm and ranch booths and new equipment.

Out in the Peterson farm fields, Andee noticed there was quite a bit of ice on the winter wheat, due to the moisture and the temperature fluctuations.

“A lot us here in the area are concerned, but only time will tell if we will need to reseed our winter wheat this spring or if it will make it through alright,” she said. “There is some snow cover on it, however, so we are thankful for that.”

Casey and Kim also went to the annual Havre Chamber of Commerce luncheon that featured Taylor Brown speaking. Brown is a well-known rancher in the Sand Springs area.

During the Montana Stockgrower’s Association annual meeting and convention, Kim took in several of the cattlemen’s college workshops.

“A lot of policy was discussed and updated at the meeting. Kim said he always enjoys seeing old friends and making new ones,” Andee said. “ This was his last year as a MSGA director, and Dana Darlington from Big Sandy will be replacing him from now, going forward.”

One of the busiest times of the year for the Petersons - calving - is about to get under way.

“We will be starting to calve on Feb. 1, so we have been fixing calf huts, making sure all of our heaters, lights and the cow camera are functioning properly at the barn,” she said.

In addition, Roy Weikum, from Valier, grinds hay for PGC once a month.

“Roy will be coming back again next week. He does a wonderful job, and it makes our feeding days shorter to have chopped hay,” she said.

As the family moves into 2020, Andee said they are “thankful that the markets have improved some from last fall.”

During the week of Jan. 20, the Petersons also plan to weigh bulls again with the Northern Premier group.