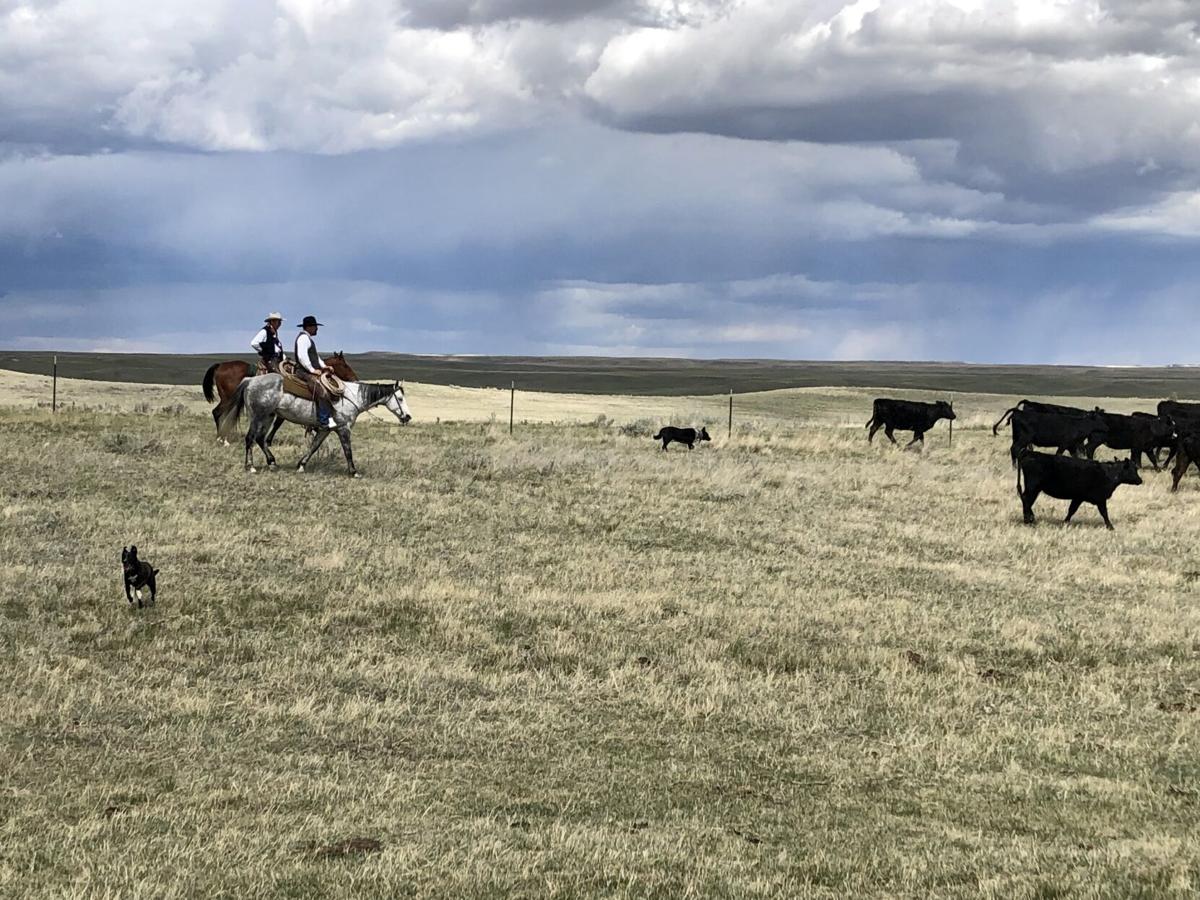 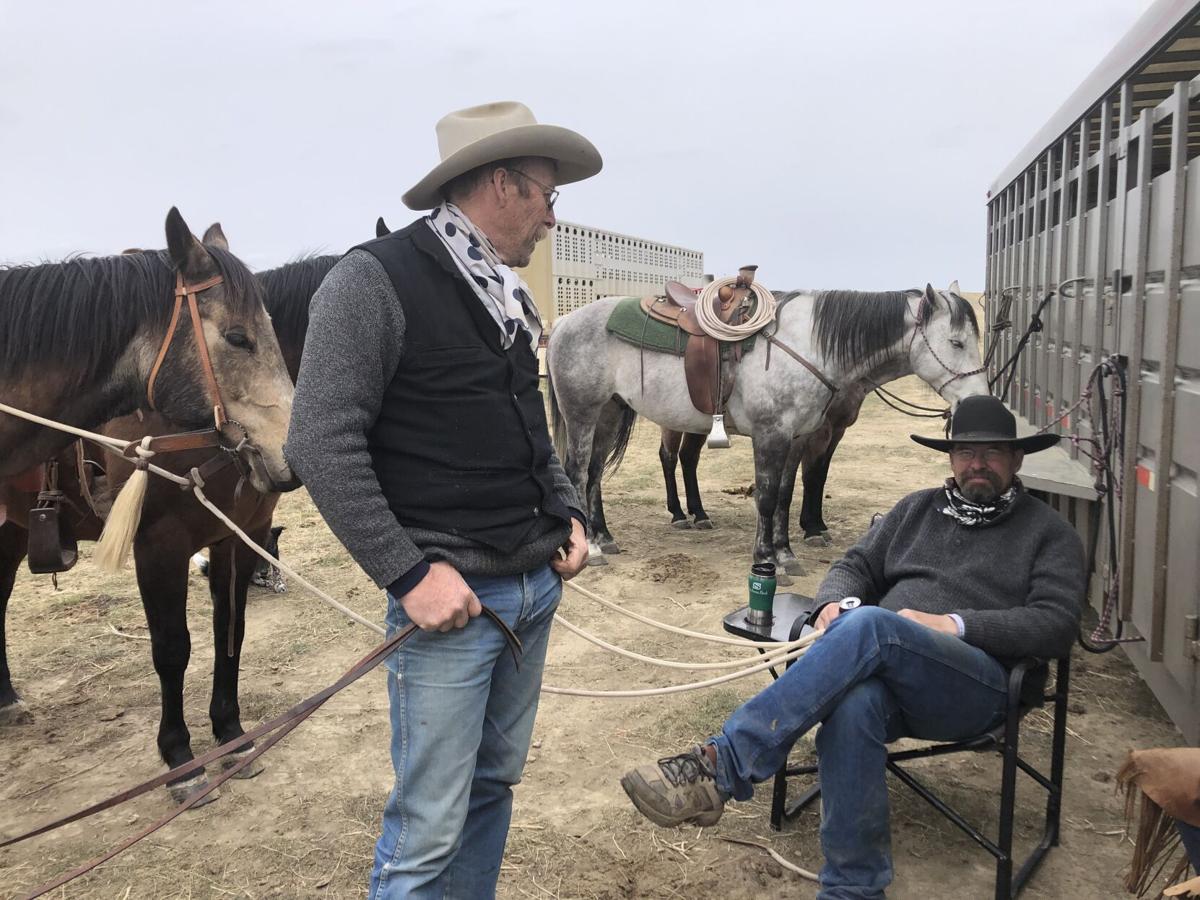 Tom and Casey Mott take a moment after a long day in the saddle.

CUSTER, Mont. – When hearing the term “cowboy” it is easy to conjure up images of John Wayne, Tom Selleck, and Sam Elliott – men who brought the western traditions to life on the silver screen. Then there is Casey and Tom Mott – two brothers who are the epitome of not only cowboys, but stockmen, as well. With their felt hats, wrangler jeans, and brightly colored wild rags, these brothers grew up on horseback following the south end of a northbound cow, and all these decades later that is still how they choose to live their lives.

Growing up in Utah, the Mott family moved to Montana in 1979 – purchasing a ranch near Rapelje. Over the years, the family sold, bought, and moved around to different operations in Montana, affording Casey and Tom the opportunity to see plenty of new country from the back of a fine cow horse.

With adulthood came the reality that the family operation wasn’t big enough to support all five of the Mott siblings returning to the ranch, so Tom and Casey had to strike it on their own. Casey joined the Marines and spent time in the eastern United States. Tom attended Montana State University, achieving a degree in animal science before taking on the position of cow boss at Fort Keogh in Miles City.

There is just something about ranching and the draw of family legacy, however, that kept the Mott brothers always driving towards running cattle of their own someday.

“For myself, after a few years in Virginia, I just decided that ranch or no ranch, I was coming back to Montana,” Casey reflected.

Returning to the Big Sky State, Casey took on ranch hand positions on some of southeastern Montana’s most iconic operations. Tom remained steady at his job in Miles City while also slowly but surely increasing his personal cow herd.

In the early 2000s, the Mott family began leasing a ranch in Miles City, and at about the same time Casey and his wife, Rebecca, bought a small herd of their own cattle. Things rapidly started falling into the place for the brothers with the operation finally getting some solid footing underneath itself when Casey and Rebecca bought a ranch outside of Custer, Mont.

It’s been a steady climb, but today the Mott brothers have purchased a ranch in Miles City and are now running about 500 head of mother cows. Tom, his wife, Patty, and their two children, Fiona and Ed, live on the place in Miles City, while Casey and Rebecca man things in Custer.

Fall works for the Motts began back in October and it has been steady chaos ever since, Casey reported

“We lease about a 35 sections of pasture that we summer in, so in mid-October we started gathering that. It takes about four days to gather that whole pasture and pre-vaccinate the calves. We set up a cow camp with a cook tent because the pasture is 80 miles from me and 35 miles from Casey, so it is just easier to stay out there,” Tom explained.

These true blue, dyed-in-the-wool cowboys love holding on to the traditions of the ranching way of life. Most all cow work is done on horseback with the help of cowdogs.

In addition to gathering, the Motts weaned their calves and had them delivered on contract. Now begins the task of trucking cattle off of summer/fall pasture and to their respective winter ranges on the Miles City and Custer operations. The Mott brothers are also in the thick of getting their cows preg-checked. Breed-up has been below-average for the operation, but the costly combination of drought, grasshoppers, and extreme heat made the higher percentage of open cows somewhat expected.

“I don’t think our breed-up was any different than any other operation in the country. We really hurt with the first-calf heifers,” Casey stated.

Once preg-checking is over, Tom and Casey will continue wrapping up the odds and ends of fall cattle work. There is still some cattle that need to be shuffled around and there are strays that still need to be gathered up. Thirty-five sections is a lot of country and Casey and Tom always expect there to be a handful of pairs that hide out and miss the bus.

Casey estimates by the end of November/first part of December that the cow herd will be started on feed, an indication that winter is not far off.

The Prairie Star would like to thank the Casey and Tom Mott for allowing our readers to follow along with their operation over the coming months. We wish them the best of success!

COHAGEN, Mont. – Traveling north out of Miles City on Highway 59 into the heart of Montana’s short grass country, the landscape is a visionary…

Tom and Casey Mott take a moment after a long day in the saddle.