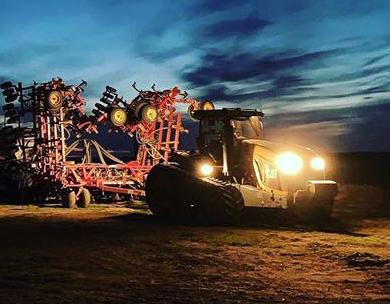 The planter has its lights turned on at night at Vilicus Farms. 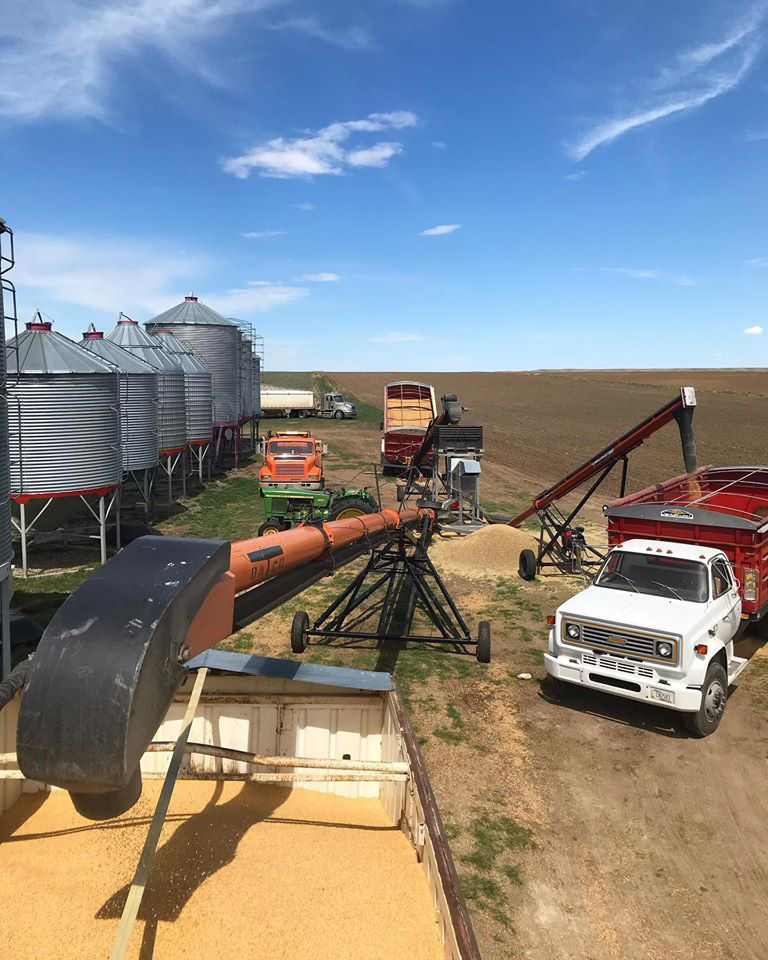 The crew at Vilicus Farms use an auger to move seed from the bin to the truck to take out to the field.

The planter has its lights turned on at night at Vilicus Farms.

The crew at Vilicus Farms use an auger to move seed from the bin to the truck to take out to the field.

HAVRE, Mont. – As May turned to June, the crew at Vilicus Farms watched their new seedlings emerge from the soil.

“We essentially finished seeding on Tuesday (May 19), after several very long nights, but we do have a few hundred acres of warm season cover crops and buckwheat left,” said Anna Jones-Crabtree, the organic farm owner with her husband, Doug Crabtree.

The growing season pushes onward at the farm in the north central region – with rain on board to boost the new crops.

“After we finished seeding, we got about 1.5 inches of rain. It is very exciting to have such great seeding conditions,” Anna said.

Ben said the crew drove the planters late into the night in order to be able to finish seeding their diverse crops within the short planting window they have.

“We’re seeding in the evening – got to turn those headlights on,” said Ben, as he took a few minutes to post a picture of night seeding on the farm’s Facebook page (https://www.facebook.com/vilicusfarms).

The farm seeds about half of their acreage to cover crops every season to improve the soil health on every field.

“After raising cover crops, we will terminate them to help feed the soil microbial life, as well as to provide nitrogen (N) to the following crop and protect the soil surface over the winter,” Paul said.

For the first time this month, Vilicus Farms will bring a herd of cattle aboard to integrate livestock with crops in a custom grazing addition to their farm. They hope it will be the start of a diversified operation, which will push soil health and organic matter on the farm.

“Up until now, we have spread manure from our neighbors’ feedlots, as a soil amendment for fertility,” he said. “We will continue to do that as it’s a valuable tool for soil building on the farm, as well as being a benefit to us and our neighbors.”

Cattle will graze crop aftermath, as happens on most diversified operations in Montana.

As an organic operation, the farm tends to have weed growth, including volunteers, growing in the stubble after harvest if the fields receive enough rain. Weeds, consequently, add more forage in the stubble for the cattle.

As cattle graze, manure is spread throughout the fields, and hoof action integrates the crops into the soil for a major soil benefit.

“I am planning to graze all of the cover crops on the southernmost unit of our farm, which we call the ‘Cottonwood Unit.’ This legume cover crop has typically been forage pea or chickling vetch, but this year we will be adding a significant portion of forage barley to that mix to increase the energy component of the forage for increased feed quality,” Paul explained.

For agronomic reasons, the farm terminates the legumes during bloom in order to sequester N fixed by the roots – before the legumes begin to put that back into the seed.

“It is unrealistic to bring in a herd of cattle to graze for only two weeks, so we will terminate the cover crops with the swather and then work through grazing using the laid-down swaths at a more realistic pace,” Paul said. He’ll be doing his own form of “haying” in June by swathing the cover crops.

Grazing swaths also saves moisture for next spring’s crop, which is valuable in north central Montana.

Their diversified operation for the future will start off as a custom grazing operation that will benefit both operations.

It provides other ranchers’ cattle the extra nutritional boost from high-quality pulse and barley forages, and allows Vilicus Farms the time to acquire its own herd and continue its soil health work.

“As with all things in ag, Mother Nature will be the ultimate decider of what we achieve with the grazing, and so I try to keep in mind that plans should be built to adapt,” Paul said, with a smile.

Paul was a former apprentice with the San Juan Ranch in Saguache, Colo. He became an apprentice after becoming hooked on agriculture during college.

“After graduating, I spent two years as an apprentice to the owner-operators of the ranch who remain my mentors to this day,” he said.

The apprenticeship position is one of many such positions in the New Agrarian Program, which is operated by the Quivira Coalition, out of Santa Fe, N.M.

“The program is intended to help normalize apprenticeship as a way for those not from an ag background to be able to become involved in ag for a career,” he said. “It gives apprentices the opportunity to work and learn from a farmer or rancher or other ag operator side-by-side.”

Vilicus Farms is also a mentorship site in the New Agrarian program.

Meanwhile, the Vilicus Farm crew is celebrating the finish of the major seeding in the fields and the arrival of rain to push seed germination and growth.

In addition, Anna and Doug are excited about the benefits of integrating cattle with the crops.

The custom grazing operation will have the cattle grazing for several months.

“The livestock will graze from the end of June until the onset of hard freezing in the late-fall,” Paul added.