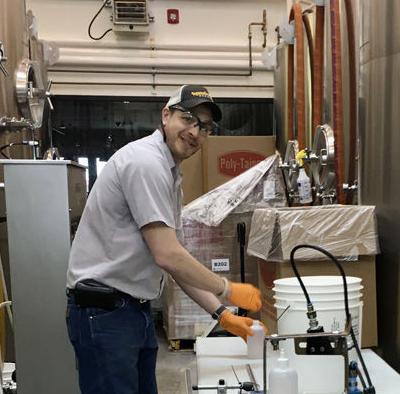 Travis Peterson in his microbrewery, Meadowlark, in Sidney, Mont., brewing hand sanitizer in gallon jugs. He also has 12-ounce bottles. 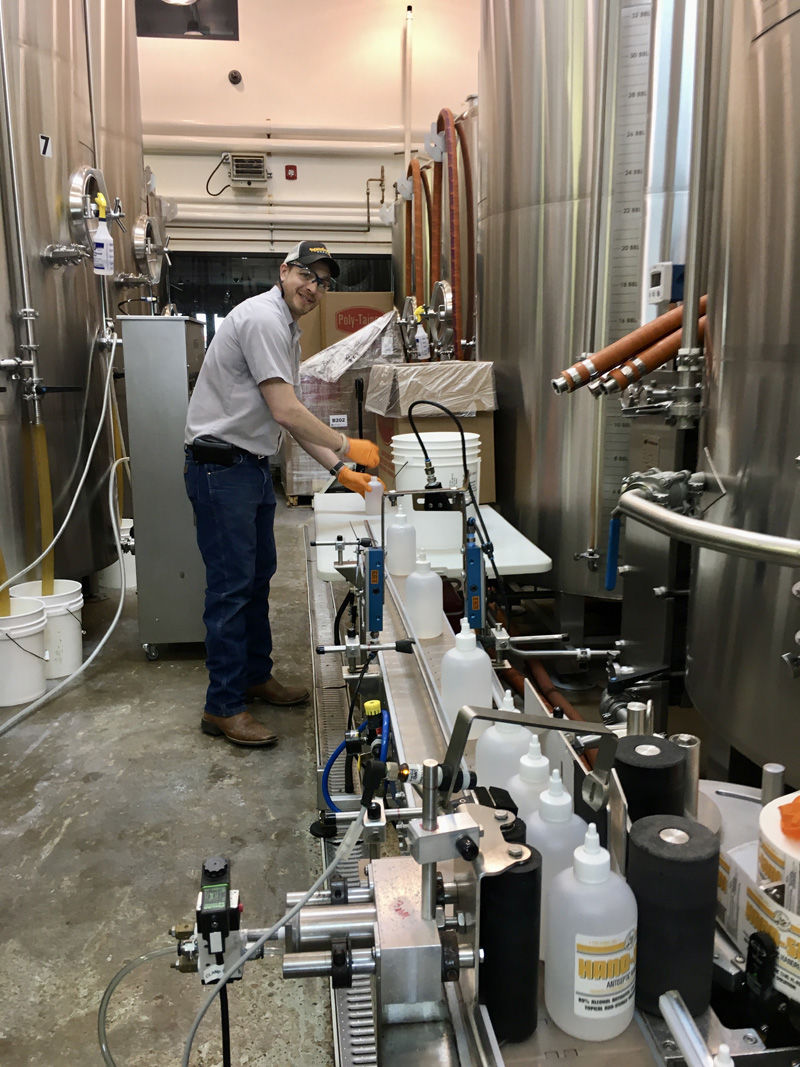 Travis Peterson in his microbrewery, Meadowlark, in Sidney, Mont., brewing hand sanitizer in gallon jugs. He also has 12-ounce bottles.

As Peterson had to shutter his brewery doors during the COVID-19 crisis, he wasn’t sure how he could keep his staff working.

But with the help of Red Trail Energy in Richardton, N.D., he got a tanker of ethanol that he used to make hand sanitizer.

Peterson knew the supply of hand sanitizer was running short on store shelves, and he realized people who needed it the most probably couldn’t find any.

“We read about first responders and hospitals not having enough hand sanitizer,” Peterson said. He decided he could probably reinvent some of his equipment at the brewery and make hand sanitizer.

The first time around, some energy companies decided to help him with the costs of converting his brewery equipment to equipment that could make sanitizer, including Enerplus, EOG Resources, Oneok and RimRock.

“When I was ready to make it, I called about 200 places looking for such things as plastic bottles, pumps, caps, jugs, all kinds of stuff needed for hand sanitizer,” he said. “Believe it or not, there is not a place that has a plastic bottle with a pump on it ready to go. They all wanted to manufacture it and send it months later.”

But finally, he found the supplies he needed. In April, Meadowlark Brewing started making hand sanitizer. Peterson acquired the recipe from the World Health Organization, and Montana had eased restrictions to allow breweries to make it.

“The first time around, we made it out of 96 percent isopropyl alcohol and hydrogen peroxide. It makes an 80 percent formulation that is more liquid than gel,” he said. They put the liquid in 12-ounce bottles.

“We donated it to everyone who needed it, including health workers and first responders at Fort Berthold Reservation, Killdeer, Watford City, White Shield, Parshall, New Town, Four Bears, Mandaree and Twin Buttes in North Dakota,” he said.

Meadowlark was able to run the isopropyl alcohol through the equipment many times before running out and having to switch to ethanol.

“A guy from Red Trail Energy heard about us and called me asking, ‘Do you need some ethanol?’ I said, ‘yes.’ I only needed about 1,400 gallons, but apparently, you have to get a tanker full,” he said.

The tanker arrived and they continued making hand sanitizer.

Peterson was still making hand sanitizer as of April 29, and will continue making it until it is not necessary anymore.

He knows restaurants and bars can open in Montana next week, but he said most places have a good supply of his beer and don’t need any right now.

Meadowlark is a microbrewery that makes specialty craft beers – both dark and light brews.

“Our most popular is called Harvester, a light beer. My dad calls it a ‘lawn mowing beer,’” Peterson said. Meadowlark sells beer all over Montana, as well as in Williston, N.D.

“We have created recipes ourselves. It is delicious beer and we have something for everyone,” he said.

Other popular beers are the Theodore Roosevelt, Mob Barley, Squashtoberfest and Black Steers Tookus. Some have chocolate and coffee flavors and taste deep and rich. Others are like typical light beers.

He gets barley directly from Two Track Malting in Bismarck, N.D. In Montana, he has to buy it from a large company that blends it because that is the way it is sold in Montana.

“I really want to buy local barley,” he said.

Peterson was concerned early on about keeping his employees paid during the COVID-19 shutdown. He applied for a Small Business Association loan, but “they never called me back.”

He did get a Paycheck Protection Program loan and was able to keep his employees working.

Peterson was raised in Sidney and his family owns the Sidney Red-E-Mix. He grew up driving concrete trucks and went to college to earn a degree in civil engineering.

He worked all up and down the East Coast, drinking craft beer on the weekends at different micro breweries as he worked during the week in civil engineering.

“When I started Meadowlark, I called those places and asked for tips on how to start a microbrewery, “ he said.

In addition to beer, the microbrewery sells good food and fun is free.

Peterson said anyone looking to purchase hand sanitizer, even in large quantities, can check out his website at https://meadowlarkbrewing.com.