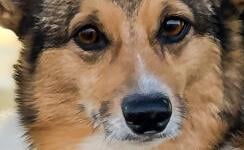 The corjis that run Dylan and Whitney Klasna's farm near Lambert check out the dry conditions in the pastures. They are watching out for their cow friends as the moms begin calving this month. Photos by Whitney Klasna. 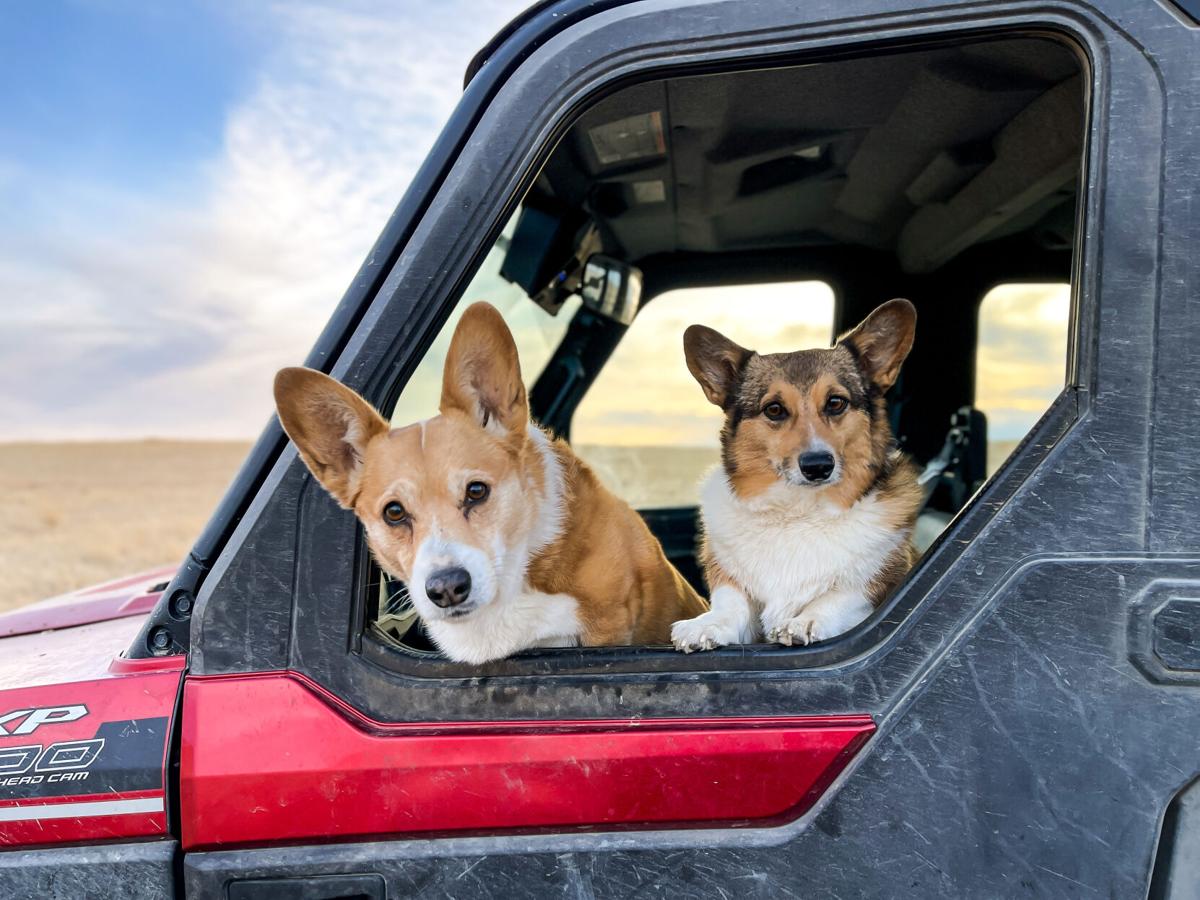 Whitney and Dylan Klasna's corjis check out the nice day and awesome scenery as Whitney stop to check pasture drought condition at their farm in eastern Montana.

“The drought conditions are concerning as spring comes on, but I tend to be optimistic,” said Patrick Gilchrist, warning coordination specialist from the National Weather Service office in Glasgow, Mont. “One big system (precipitation event) could turn us around, so there’s still time, but the dry conditions warrant attention.”

Gilchrist spoke to producers about the forecast for agriculture during the 2021 MonDak Ag Research Summit on March 11.

“We have had some skiffs of snow this winter, but nothing to write home about for precipitation,” he said.

Predictions last year for the winter of 2020-21 were for a La Nina, which typically brings high moisture and cool conditions to the Northern Plains.

“With La Nina in the Pacific, it does not always mean wet and cool,” he said. “We had a La Nina winter over 2020-21 that looked very much like an El Nino. That was unusual, and shows the problems with forecasts.”

The eastern Montana/western North Dakota region has a variable climate and things can change in a hurry, but forecasts have challenges – especially months out.

“Science is getting better, but there are times that are missed due to effects like the La Nina that looked like an El Nino,” he said.

For statewide average temperatures, Montana and North Dakota stand out as having a record warm winter from November 2020 through January 2021.

There were two major snow systems during the fall of 2020, one in October and one in November.

“That was it. After that, there were mild conditions with a little bit of wind over the winter and some skiffs of snow,” he said.

However, nice weather comes with a flip side.

“Precipitation from November 2020 through January 2021 did not do anything to deter drought conditions in eastern Montana and western North Dakota,” he said.

The state of Montana, as a whole, had a good winter, especially in south central Montana.

“There was a fair amount of snow in south central Montana and western Montana, but it missed the eastern region,” Gilchrist said.

Montana as a state finished high in snow precipitation, but not in eastern Montana.

There was widespread cold over two weeks in February, so “we flip-flopped” on temperatures.

Drought conditions have been present since last summer.

“February is a dry month anyway, so even having average precipitation doesn’t do much for the drought problem,” he said.

Eastern Montana and western North Dakota continued to have below average precipitation in February.

“Montana as a whole was the 101st wettest February, while North Dakota was the 12th driest February,” Gilchrist said.

Montana’s numbers were skewed by the snow in the western side, where the state had above average precipitation and snowpack.

The good news is there is good snowpack in all the mountains in Montana.

“Montana does have good snowpack in the mountains, which is good news for irrigators using the Yellowstone River,” Gilchrist said.

The depth of snow in Yellowstone Park and the basins is below normal due to warm temperatures. But the snow is wet, heavy snow that has packed down.

“The snowpack is there – it is just not as tall,” he said. “Don’t be deceived by snow depth. The water is there. All the river basins are from 90-105 percent of normal.”

However, Gilchrist pointed out that weather and climate “have a flip side.”

“We are staring down the barrel of some drought conditions,” he said.

In February 2021, it started out warm and then turned very cold.

“By Feb. 6, the Midwest was in the ice box. There was widespread cool weather, and February was the 24th coldest February on record,” he said. “It came as a shock to most of us.”

In the MonDak region, the area was dry from March 1-10, some 5-10 degrees above the average temperatures in March.

“We are seeing a lot of fire activity on the uptick, which caused our office to have to adjust to dry conditions,” he said. “There is a lot of tall, dry grass out there. Without any runoff or lingering snowpack, we open the door to fires until we get green up underway.”

In fact, a recent 700-acre plus grass fire west of Sidney, Mont, the second week of March was attributed to dry conditions.

Under normal conditions, the MonDak region would have had a few inches of snow on the ground by this time in March, and currently, snow is several inches behind normal.

“This is the time of year when we could get more snowpack,” Gilchrist said.

The U.S. Drought Monitor is showing exceptional drought down in the Texas/Oklahoma areas. North Dakota is severely impacted by D2 drought areas, and there are D1 moderate drought areas in the MonDak region.

“If we don’t get precipitation, things are going to continue to deteriorate and we could see drought conditions worsen,” he said. “Where we are at, we have not seen systems yet.”

The seasonal drought outlook is seeing no change in drought signals in much of the western U.S., and in the MonDak region.

For the forecast, there is “nothing to project the outlook.”

“We are in neutral conditions. There is no strong signal, so it lowers our confidence in the outlook,” he said.

“The seasonal outlook is for warmer temperatures for the next three months and we will be paying close attention to the precipitation,” Gilchrist said.

There are some tools that can help producers in their decision making in the MonDak region.

“Please use it to assist you in decision making. It will give a risk assessment for newborn livestock,” Gilchrist said.

The advisory takes into account none-to-extreme wind chill, rain or wet snow, high humidity, combinations of the events, and whether it will be sunny or cloudy.

“Solar radiation is a big player in how the day will feel,” he added.

Another great resource for producers who are preparing to plant this spring is the Montana Climate Assessment’s “Factors That Drive Ag Decisions in Montana.”

Gilchrist said another resource for Montana producers is the Montana Drought Impact Reporter.

“They have the ear of the authors of the U.S. Drought Monitor,” he said.

The authors want to hear from producers in Montana as to what they are really experiencing on the ground with the drought.

“If you have real numbers, such as you are putting out more feed or you have changed your operation, that helps us and we don’t fall behind in the reporting. We need to know the conditions on the ground, so call and let them know,” he said. North Dakota producers can call the National Drought Impact Reporter.

After his presentation, a producer asked about a weather alert he had heard about in February that there would be heavy snow along the Highline in Montana and to be prepared.

“That was what we call social meteorology or a storm chasers group, most likely not a professional, that took one weather model and posted it,” Gilchrist said.

The weather forecast “took off” and it was shared 800 times.

“We dealt with it for a week.We look at dozens of weather models, and it is very dangerous when you take an outlier (model) and share it. You don’t want people preparing for 48 inches of snow up here,” he said. “I encourage folks to be diligent about this stuff. Make sure you are tuned in to a weather source you trust.”

Sustainable Oils, a renewable fuel company, has been hard at work researching and developing varieties of camelina. To showcase their work and…

The corjis that run Dylan and Whitney Klasna's farm near Lambert check out the dry conditions in the pastures. They are watching out for their cow friends as the moms begin calving this month. Photos by Whitney Klasna.

Whitney and Dylan Klasna's corjis check out the nice day and awesome scenery as Whitney stop to check pasture drought condition at their farm in eastern Montana.