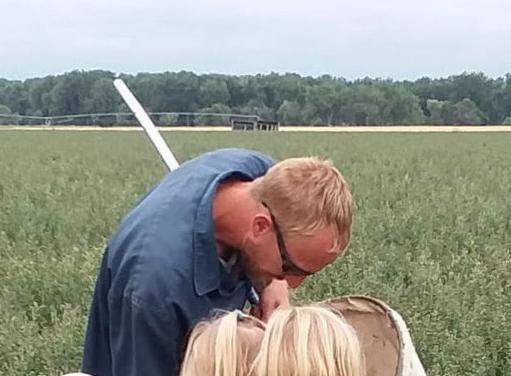 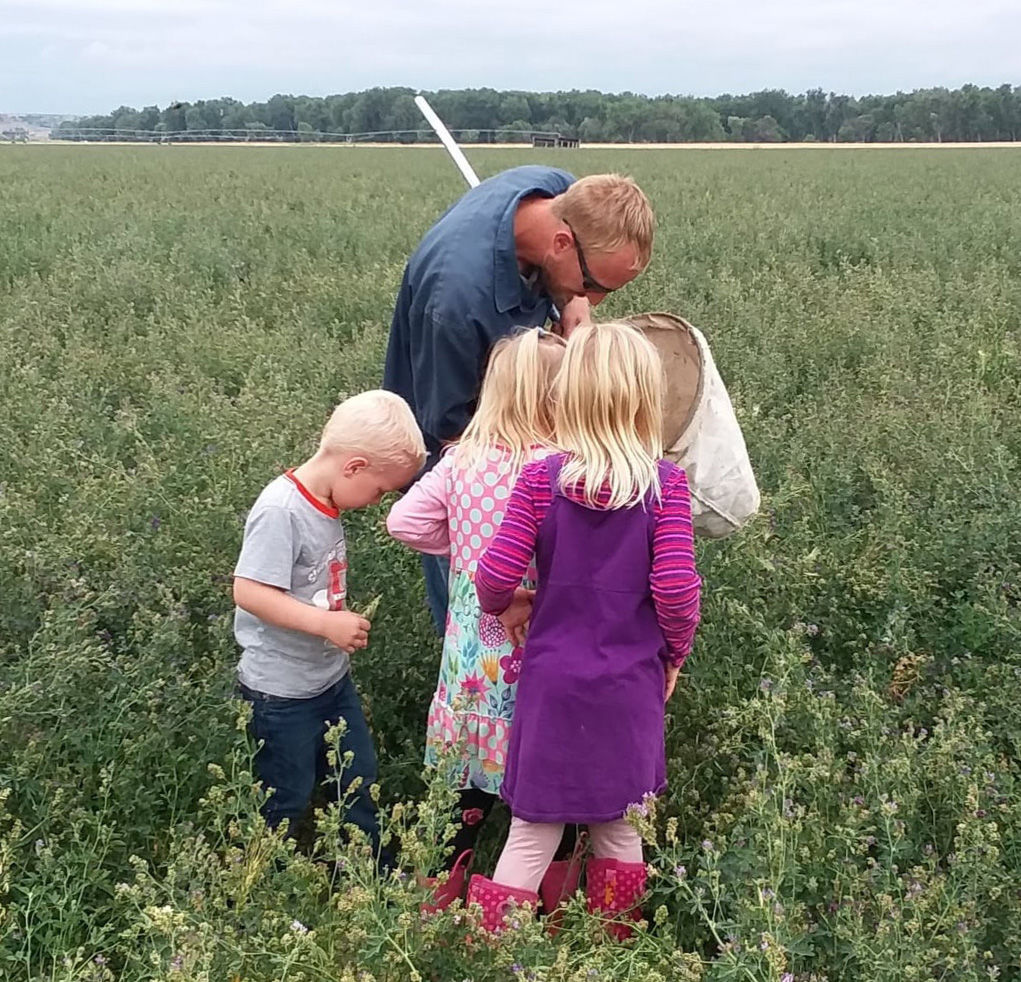 Cavin Steiger, with his kids, from left to right, Evan, Abry and Elise, were out scouting for insect pests in an alfalfa seed field. The Steigers are progressive farmers, always trying new and diverse crops and farming practices.

Cavin Steiger, with his kids, from left to right, Evan, Abry and Elise, were out scouting for insect pests in an alfalfa seed field. The Steigers are progressive farmers, always trying new and diverse crops and farming practices.

FORSYTH, Mont. – For one progressive farm family in southeastern Montana, a passion for agriculture and an unwavering commitment to soil health are the two driving forces behind many of their farm decisions and practices.

Cavin and Karly Steiger farm a wide diversity of crops on their dryland and irrigated farm, always trying new crops and new ways of farming.

Karly, originally from Circle, met Steiger while she was teaching school in Hysham. She took a few years off from teaching while the kids were young, but now she is starting back teaching sixth-graders this fall.

The couple has 7-year-old twins, Abry and Elise, and 5-year-old son, Evan. They like to help out with some of the irrigating chores.

After harvest, their beets are hauled to a receiving station for Western Sugar.

From no-tilling to intercropping and plenty of soil health practices in between, the Steigers have found a way to deal with the often-arid conditions in southeastern Montana.

“It’s important to keep a living root as long as you can in the soil. I no-till all my crops and have been no-tilling since I started in agriculture,” Steiger said. “It saves moisture and we always have good water infiltration in our fields.”

The Steigers farm a diverse range of crops, and often try new crops in their own farm trials to find the ones that work best for them.

“We have many different crops and we like to try different ones. If a crop works in our system, we keep it. If it doesn’t, we don’t,” he said.

The Steigers like planting winter crops, not only to save on labor in the spring, but also to help save fuel and time.

The winter crops Steiger planted in last fall that are coming up strong and green this summer include: winter wheat, winter lentils and winter triticale for certified seed.

“I was asked to plant winter triticale for certified seed a couple of years ago for ranchers to grow for forage,” he said, adding winter triticale is a winter annual developed through a cross between winter wheat and winter rye.

Steiger is a certified seedgrower and on the board of the Montana Seedgrowers Association.

Besides sugarbeets and the winter crops, Steiger has seeded several crops this spring, some for dryland and some for irrigated land.

Those crops include: sunflowers, yellow peas for seed, malting barley for both malt and seed, spring wheat, soybeans, alfalfa for seed, alfalfa/grass mixes, foxtail millet for seed, Basin wildrye grass for seed, many cover crop mixes, and even watermelon.

“We put in 5 acres of watermelon. I haven’t grown it before, but we’re going to see how it does here under irrigation,” he said.

Steiger has his own farm operation, as does his father. His grandfather also had his own farm. In fact, his entire generational family has farmed.

His great-great-grandparents came over from the Black Sea region of Russia in the 1900s. They were Germans from Russia and settled in South Dakota to farm. Later, his family moved to Billings, searching for irrigated farmland, so there would always be moisture for the crops.

In 2007, Steiger started off his career in agriculture as a custom pollinator.

In 2008, he began custom spraying for other producers, putting his savings aside until he had enough to rent his first land.

When Steiger began farming, he started off no-tilling with a Great Plains double-disc opener drill with a coulter.

Later, he purchased a Monosem beet planter. The planter provided a row-by-row downforce in order to plant seed at accurate depths, while eliminating compaction. The row cleaners kept the seed trench area clean of debris, so no-tilling was possible.

“We now no-till all our crops, including our sugarbeets,” he said.

No-tilling, plus other soil health practices have helped the soil at the farm.

“We don’t have erosion when it rains or when a field is irrigated due to good water infiltration and our soil has gained in organic matter,” he said.

When the Steigers rented some dryland acres, Steiger needed a larger drill to cover the increased acreage.

Recently, he bought a Shelbourne Reynolds stripper header for harvesting. The header quietly strips the heads of wheat, leaving the straw to feed the soil biology, and to hold the snow and other moisture in the soil.

“I really like it – having a stripper header is the way to go,” Steiger said. “It eliminates erosion from the wind and water, keeping the moisture in the field and not running off.”

Many of the crops Steiger grows for seed are on irrigated acres, but he has no problem growing a dryland crop for seed on dryland acres.

For example, Steiger is growing some of his Basin wildrye on land with alkaline soil. The wildrye provides excellent surface erosion control and soil stabilization.

“I have some ground that is tough with water table problems that I am growing Basin wildrye on. It’s nice to get a perennial crop going on that ground and not have to touch it again for a few years,” he said.

Steiger grows winter canola and sunflowers because of their efficient taproots that can scavenge deep for nutrients.

“Winter canola has a long taproot like safflower, which I have also grown in the past. It can help break up compaction in the soil and in the hard pan areas,” he said.

Winter canola “fills the canopy,” and it typically has higher yields than spring canola. In the first year it can be grazed or swathed and baled to prevent it from bolting.

Steiger picked some rough land that he leveled out for dryland farming. He will be seeding Roundup Ready winter canola, which will help with some of the bindweed and cheatgrass weeds it has, while at the same time, breaking up some hard pan layers.

“I believe in diversity, obviously because I have so many crops and I put in crops that will help the soil, such as legumes, or cover crops with long tap roots,” he said.

The Steigers are also green seeding, which is seeding directly into a living cover crop to maximize the soil health of their fields.

“We have started green seeding, planting into cover crop mixes with turnips, radishes, buckwheat and winter lentils and the volunteer cereal from the year before,” Steiger said.

With a field of winter triticale, Steiger used a land roller to roll it over and press it down. Then, he seeded soybeans into it.

“The green seeding suppresses weeds, keeps the ground cooler and keeps the water from evaporating,” he said.

When planting soybeans this way, he will not have to use as much irrigation or chemical, which saves him money.

“The biomass on top the soil holds the water in and helps it spread, so there is no erosion,” he added.

In 2017, the Steigers had a huge hailstorm that damaged many of the crops.

“The winter wheat was destroyed. We let the volunteer grow throughout the field, because it was mostly clay soils,” he said. The field was slated for beets.

“Farm practices like that continue to improve our soil structure,” he said.

Steiger decides on rotations mainly by chemistries on the field the year previous, marketing potential, and agronomics.

“It is pretty variable, dependent on different factors, especially chemistries,” he said.

Meanwhile, Cavin and Karly are watching the skies for precipitation in 2020.

“It has been warm, somewhat dry and windy,” he said, while staying busy, loading peas to haul to a neighboring rancher to supplement his cattle. “Some moisture would be nice, especially for the dryland crops.”