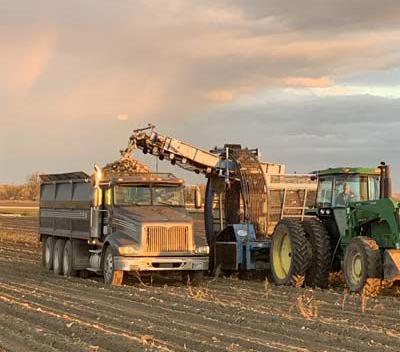 Sarah Rachor and her dad, Mike Degn, were busy in October finishing harvesting sugarbeets at their farm south of Sidney. 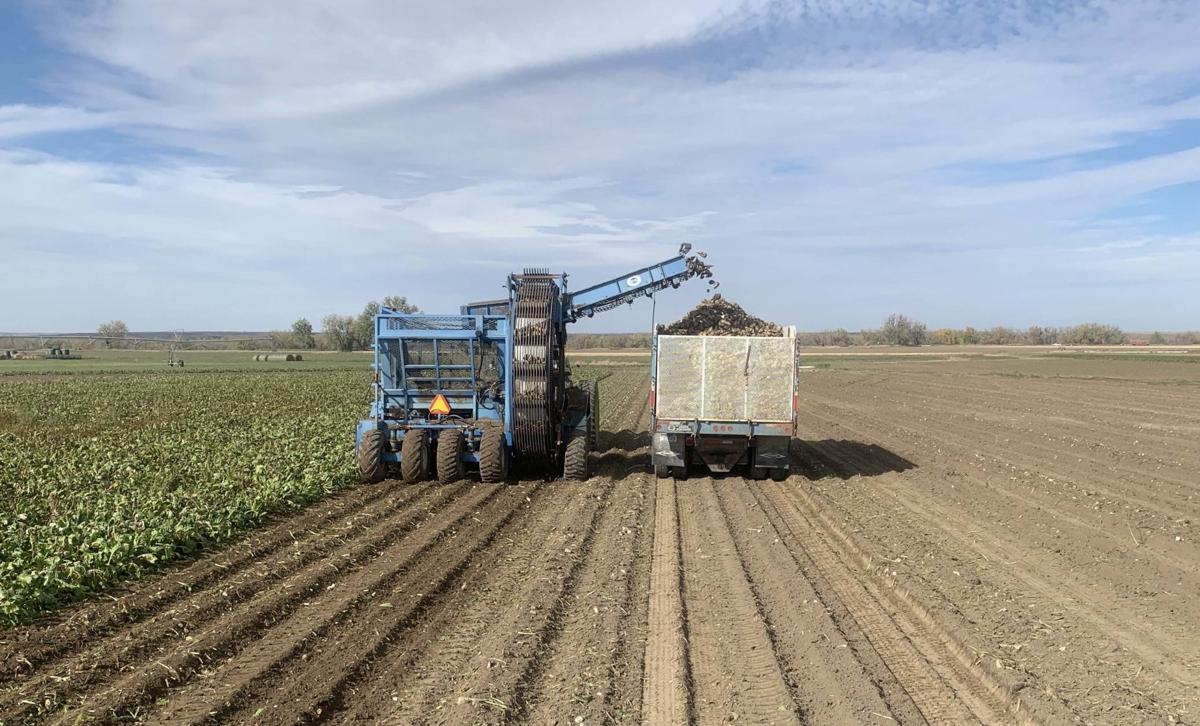 Sarah Rachor hurries to finish beet harvest as a winter storm was predicted with low temperatures and rain/snow.

Sarah Rachor and her dad, Mike Degn, were busy in October finishing harvesting sugarbeets at their farm south of Sidney.

Sarah Rachor hurries to finish beet harvest as a winter storm was predicted with low temperatures and rain/snow.

SIDNEY, Mont. – Not every beet could be harvested this year in the Yellowstone Valley due to heavy precipitation in September and frost in October.

Growers were able to harvest 31,330 acres of beets, a total of 32 tons per acre, with a sugar averaging 17 percent.

“We really thank the growers for all their work during this tough year,” Peters said. “It has been a struggle since day one, with a cold, late spring to plant in and harvest being so difficult. We had 13 inches of rain just in the month of September – that’s about what we usually get for the entire year.”

The heavy moisture left the pile grounds and farm fields muddy – then it started to snow and frost was in the weather picture.

Most of the growers were able to complete harvest, in spite of the poor conditions.

“We’ve finished harvesting all our beets and trucking them in to the factory,” said Sarah Rachor, a beet, hops, soybean and wheat producer south of Sidney. Rachor takes her beets straight to the factory, while other growers take their beets to the nearest piling station.

Rachor said she has mostly sandy soils that get good drainage. While her farm fields were muddy from all the rain, it was not enough to stop her from digging out her beets.

Beet farmers in Yellowstone Valley worked all day and late into the evening to get the beets out of the ground, and getting stuck wasn’t unusual.

Trucks lined up at the factory or at the pile stations, waiting for their turn to dump beets.

“We were waiting in line 2-3 hours and I had to take in four or five loads a day to get them done because of the weather forecast,” Rachor said. “One day, we are out harvesting just fine, and the next day it froze hard.”

The freezing conditions with snow in October meant that some of the sugarbeets froze in the ground in northeastern Montana.

The area hasn’t seen that poor of harvest conditions in many years.

Don Steinbeisser, Jr., Sidney director of the Montana Dakota Beet Growers Association and a beet grower, said it was a tough year with weather conditions poor in the spring, throughout the growing season, and at harvest.

At the Steinbeisser farm, they were able to harvest 31 tons per acre of beets, but left 95 acres in the ground.

“The mud wasn’t a huge problem for us, even with all the rain. There was some pile ground problems because of the rain, however,” he said. “Cold weather and frost was more of a problem for us.”

The Montana Dakota Beet Growers Association and Sidney Sugars added on to the growers’ contracts, with the factory agreeing to accept and process frozen sugarbeets.

The Sidney Sugars factory could not exist without the growers they have throughout the Yellowstone Valley.

However, it wasn’t just beets.

Just about every crop was tough to harvest this year, because it was raining while the growers were trying to combine, swath and/or chop crops. It led to the mud and the all-around miserable conditions during harvest.

“In order to chop corn, we had to hook the tractor on the front of the trucks, pull them off the road and then pull them back on the county road (after filling) to get them into the yard,” he said.

Steinbeisser said when Jan. 1 rolls around, farmers will breathe again and will be “very glad” to start a new year.

“A lot of grain and safflower doesn’t have the usual good quality our crops in the Valley normally have. At our farm, we’re still working on getting a third cutting of hay,” he added.

Soils in the Sidney area may be clay, but they have gravel at the bottom, which helps them drain well, Steinbeisser pointed out.

“But that is also why we have to have irrigation here because in a normal year, we don’t get enough rain to raise sugarbeets,” he said.

The Steinbeisser’s cattle herd is doing well, and the family already has plenty of hay stacked.

Rachor said she finally finished harvesting her soybeans and they looked “good.” Even if the soybeans had been planted on dryland, which they weren’t, it was a good year for soybeans.

“Because of the weather, however, and all the snow we received, I didn’t get my fall fertilizer work done. That leaves more work in the spring,” she added.

At Sidney Sugars, Peters said the factory is expecting to have plenty of beets to slice around-the-clock through February. The factory can slice 6,300 tons per day.

“It looks like the factory will finish at the end of February 2020, the same as last year,” he said.

Peters said there were some 1,200 acres of beets that were left in the field with 1,000 acres of those being protected under crop insurance.

Trucks from the factory are currently pulling beets out of the piling stations.

“We’re probably about 25 percent done with slice,” he said. “You have to watch the weather and road conditions before you go pick up. That’s where it can get interesting.”

When road conditions are icy, or there is road construction, trucks loaded with beets can have problems trying to maneuver through the maze.

Sidney Sugars started in 1925, but beets have been grown in the Yellowstone Valley for 98 years.

“Growers have been raising beets here in the Valley for a long time. Even before the factory was built, farmers shipped their beets to Billings for processing,” Peters said.