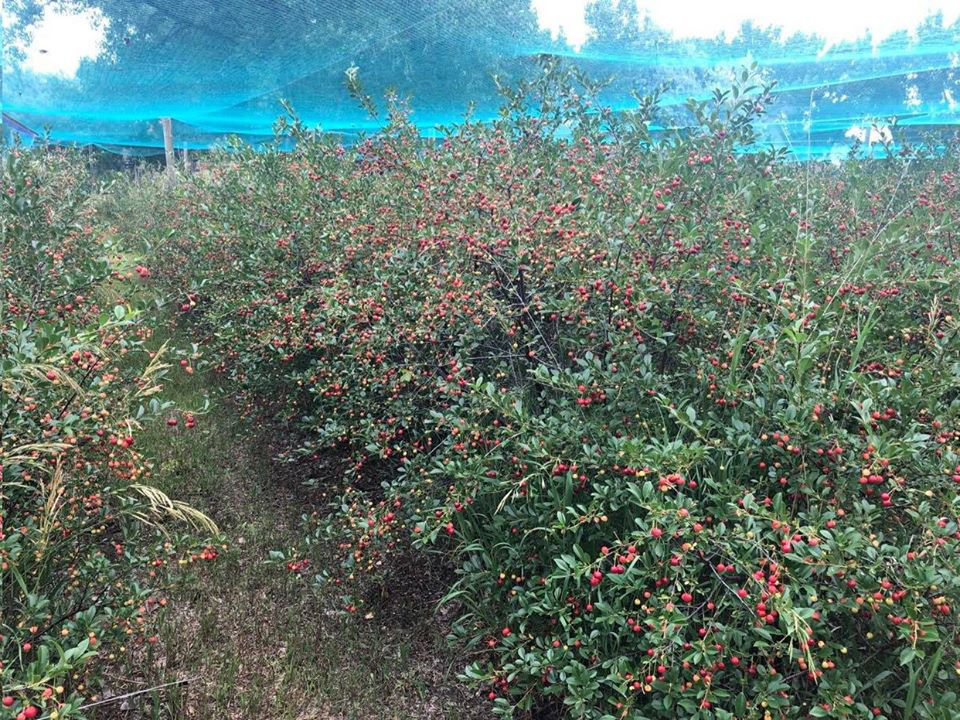 In the Tongue River vineyard, there are 200 carmine jewel plants, and this is what they look like in July 2020. 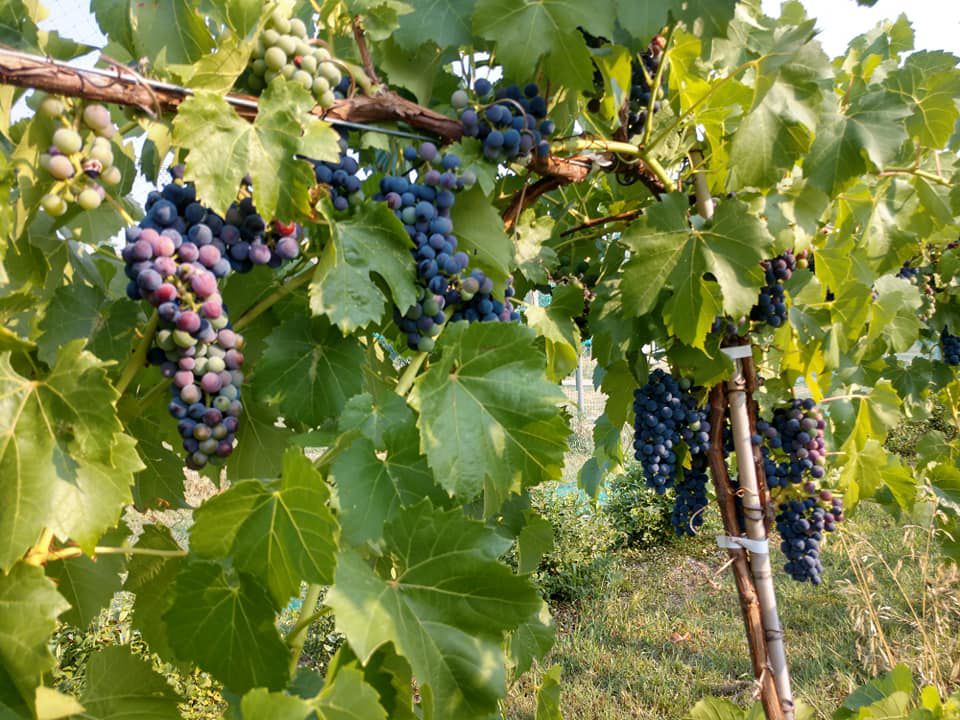 The Thadens grow many varieties of grapes and have made them into successful award-winning wines. 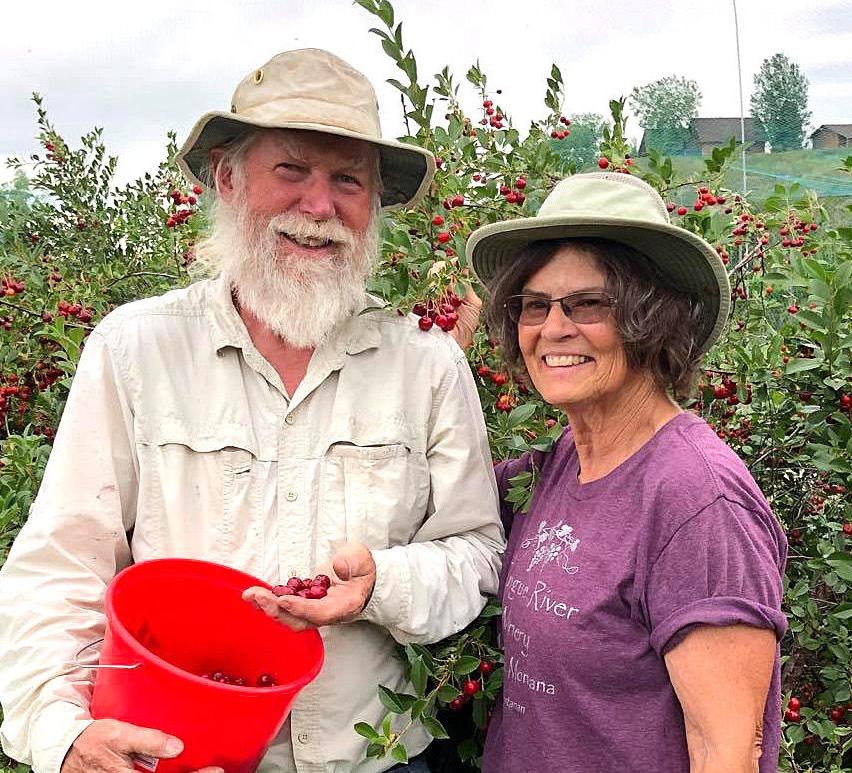 Bob and Marilyn Thaden farm a vineyard near Miles City, Mont., growing many fruits and grapes to process into their award-winning wine at Tongue River Winery.

In the Tongue River vineyard, there are 200 carmine jewel plants, and this is what they look like in July 2020.

The Thadens grow many varieties of grapes and have made them into successful award-winning wines.

Bob and Marilyn Thaden farm a vineyard near Miles City, Mont., growing many fruits and grapes to process into their award-winning wine at Tongue River Winery.

MILES CITY, Mont. – Bob and Marilyn Thaden farm a vineyard near Miles City, Mont., growing many fruits and grapes to process into their award-winning wine at Tongue River Winery.

Bob Thaden never planned to open a winery – it started as a hobby.

“I made my first batch of wine when I was in college,” Thaden said. “It started as a hobby, and then it grew, and this year I will have been making wine for 54 years.”

In the Tongue River vineyard, there is some 2,000 grapevines, numerous apple, pear and plum trees, 200 carmine jewel plants, yellow and red raspberries, haskap berries, cherries, rhubarb, currants and a few other fruits.

Last year, they were able to increase their acreage, purchasing some nearby land that was close to their vineyard.

“We planted an additional half acre of grapevines there last spring,” he said.

“Bob is the winner of more than 100 wine awards, making grape and exotic fruit wine commercially for 10 years and longer as an amateur,” Colley said.

“Producing fruit in alkaline or high pH soils requires careful management, but it can be done.”

Initially, Thaden wanted to grow fruit so he and his wife would be able to make their own wine when they retired.

“But we never stopped planting. If you are growing for a hobby and you don’t stop planting, it may get bigger than a hobby,” he said.

The Thadens moved to Miles City in 1990 and have lived there ever since, except for a four-year stint in Butte, Mont., from 2001-05 when Bob retired from a ministry to small churches.

“I’ve been growing fruit here in eastern Montana for three decades,” he said.

That proves fruit can be grown in eastern Montana – and fruit for wine – as long as a producer does some work ahead of venturing out to grow a fruit tree or a vineyard.

Producers need to find their market before putting a plant in the ground, which is true of most every crop grown in Montana.

“If you want to sell commercially, you need to know your market and who will buy your product,” Thaden explained. “If you come to me with Concord grapes to sell me, I won’t buy them because I need higher quality grapes.”

In general, Thaden pointed out it is important to know your soil type and pH; the quantity, quality and pH of the water supply, the average first and last hard frost dates and the growing degree days, along with finding the right hardy varieties that fit your agricultural zone.

Thaden commented on the types of fruit that can be grown in the Northern Plains:

“They make an interesting wine, but we don’t grow them here. But there are many areas, especially in the Flathead Lake region in Montana, where those berries grow. The juice is very dark,” he said.

“Haskaps don’t make good pies, but they are wonderful for jams, jellies, juices and wine,” he said. “We harvested ours two days ago (on June 23).”

The University of Saskatchewan has developed several varieties of haskaps for growers. Some varieties do have a large berry.

“They are tedious to pick, so our haskap wine is one of our most expensive,” he said.

Haskaps can be harvested semi-automatically using a saw shaker with a modification and a child’s swimming pool with a hole in it.

The Thadens use carmine jewel cherries in their award-winning Cherry Pie wine.

“We grow a lot of carmine jewels. They have the acid of a pie cherry and the sugar of a table cherry. They are big enough to pit and make excellent wine,” he said. “These cherries will grow to 6-8 feet tall or more if you let them grow, and they produce a phenomenal amount of fruit.”

Thaden expects to pick some 3,000 pounds of carmine jewel cherries this year.

“Sand cherries make a lovely wine, as well as a good jelly. We cut ours back to ground level this year after 10-12 years. We won’t have a crop this year, but we will be getting nice, new, fresh plants with cherries next year,” he said.

“Plums are worth considering, and some of the domestic ones will grow here as well,” he said.

“Golden spice pears are a super hardy pear, and small in size. They make a lovely, crisp wine or pear juice,” he said. “We use an apple shredder for apples and pears.”

In answer to a question about why pears won’t ripen, Thaden said many pears should be picked before they are ripe.

Pears grow with a slightly curved stem and if you take hold of the pear and lift it against the curve, and the pear snaps off easily, that is when they should be picked. They will ripen in storage.

“Finding the right pear variety is important. Grow the hardiest ones you can find,” he said.

Raspberries provide fruit in the fall, but are still loaded with fruit when the first frost comes in the fall.

“We have done it the old-fashioned way, with feet, as well,” he said.

“We sell more rhubarb wine than anything, so it is a crop worthy of consideration,” Thaden said.

They also have many varieties of grapes in their vineyard.

Some of the grapes the Thadens grow include: Marquette, Frontenac, La Crescent white grape, Swenson Red, Frontenac Gris, Briana (which was made into a first-time wine in 2018) and Crimson Pearl grapes.

Crimson Pearl grapes can grow in the southeastern region.

The Thadens have a nice harvest of grapes coming this year.

Proper pruning is essential to having good, successful fruit.

Tongue River Winery processes all of its fruit raw, the way wine should be made to capture flavor.

Many of the Thaden’s regional neighbors come to help with harvest in the fall. Some bring extra fruit, like crab apples, that they don’t want to see go to waste.

In turn, the Thadens teach winemaking and vineyard management to those who want to learn it – and they are good community members.

In addition to Tongue River Vineyard and Winery, the Thadens also have a “Bed and Breakfast” on site. Visitors can taste wine, stay the night, enjoy the scenery and have breakfast in the morning.

At the winery, there is a wine tasting room, a gift shop and a function hall.

The business has stayed open throughout the COVID-19 pandemic.

“There were no cases in eastern Montana until June, but we do practice social distancing. We do host couples as long as they indicate they have been careful about the virus,” he said. “We are not hosting groups at this time.”

The pandemic has affected their business, however.

“June, July and August represent 40 percent of our yearly income just from sales at the winery. Because tourists are not travelling as much this year, we are not making as much as we usually do,” he explained.

At Tongue River Vineyard and Winery, the Thadens make more varieties of wine than any other winery in Montana.

Tongue River can now ship its products to 41 states, and those interested can order through the website at https://www.tongueriverwinery.com.

“We refuse to ferment anything that won’t grow here, because we want to make truly Montana wines that represent what is truly unique about this region,” he added.