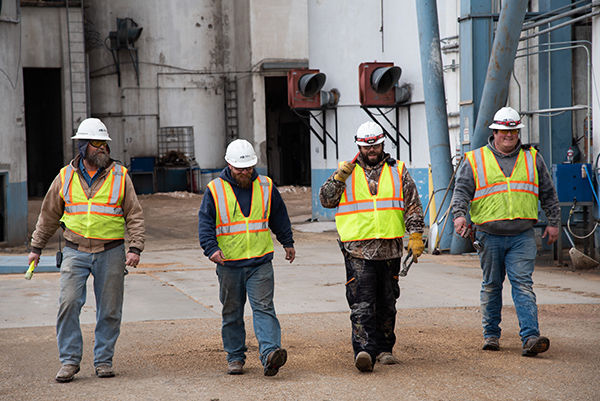 Members of the Central Valley Ag team walk the grounds in Beloit, Kan.

The mission at Central Valley Ag is displayed in the main entrance of company headquarters in York, Nebraska: “Embracing the Cooperative Spirit to deliver value to our members.”

Carl Dickinson has served as the cooperative’s president and chief executive officer for a decade and has worked to hold fast to that mission as the company evolves.

“If we take the legacy companies that make up CVA, we are well over 100 years old,” he said. “Through all the transformations we have been through, we have always remained a farmer-owned cooperative.”

Dickinson grew up on a hog farm on Highway 14 between Central City and Marquette, Nebraska. He now resides a short drive from his roots.

“Many of the employees at CVA, including myself, would be farmers if they could,” he said. “That is a big part of what drives us in our jobs every day, to serve the farmer.”

That is also a big difference between running a cooperative versus an investor-owned company, he added. Farmers own CVA.

“This model allows us to keep the farmer at the center of our world and to make long-term investments on their behalf. We don’t have the same demands on our capital that an investor-based company does,” Dickinson said.

While the team at CVA strives to keep the farmer central to their work, Dickinson said they are also constantly figuring out how to compete in an ever-consolidating agribusiness climate.

That’s lead to mergers and consolidations.

CVA is made up of about 15,000 voting members and around 30,000 overall accounts. Voting members are producers of agricultural products who patronize the cooperative annually.

The company expects to handle 205 million bushels this year.

“We have to drive margins without it being just a size game,” Dickinson said. “I often tell farmers if they think they are going to get wealthy just raising No. 2 yellow corn, they need to look around.”

CVA also works with value-added crops like non-GMO (genetically modified) white corn, non-GMO yellow corn and food grade corn. One division is dedicated to figuring out how to build more value per acre.

The company specializes in agronomy, feed, energy and grain. It began providing variable rate fertilizer prescriptions in the 1990s, a precursor to selling and providing precision ag equipment services. That began in 1996 when one of their patrons purchased his first Ag Leader Yield Monitor.

In 2005, Advanced Cropping Systems (ACS) was branded as a way to set CVA apart from the competition. The platform was trademarked in 2007. It’s since expanded its Precision Data Services from grid and zone sampling to include variable rate (VR) seeding, VR irrigation, moisture probes, VR nitrogen and more.

“One of our biggest challenges is that we have segmentation in farming,” Dickinson said. “We have the really large farmers all the way down to the farmer who owns one quarter and works full-time in town. We want to serve all segments well and are always trying to come up with new ideas on how to do that.”

CVA locations stretch from Iowa to Nebraska and Kansas. That is what makes their local leadership so vital, according to Dickinson. The company is divided into nine regions with operational managers and sales managers serving each of them.

“We want to get the decision making as close to the customer as we can get it,” he said.

With growth of the cooperative, CVA has been able to spread the cost of talent over more bushels, Dickinson said. The company has five certified public accountants on staff and has full-time controllers for positions such as grain and agronomy.

“In the end, it’s our people at CVA that make the difference,” he said. “Anybody can build elevators and build plants, but we want people in the positions they are the best at.”

Dickinson said that looking forward is always about remaining true to their vision: “To be a world-class cooperative ensuring the long-term success of our employees and customers.”

That service is especially important in a year of challenging weather and mounting stress.

“In times good and bad, we have to band together for the common good,” Dickinson said. “That is why coops were formed, and that is why we are here. They can lean on us, and we will be here for them.”

More in Businesses of Agriculture (4 of 39)