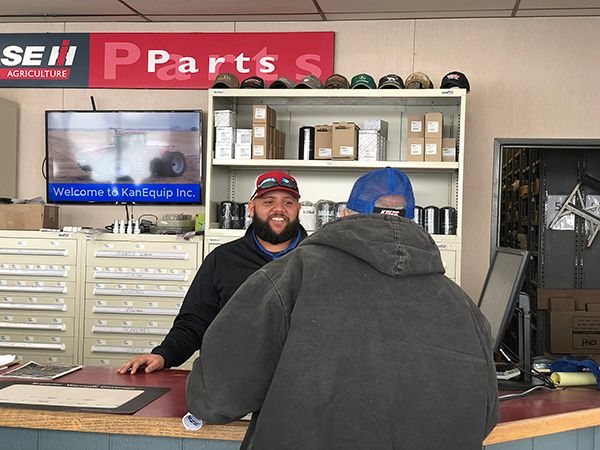 Alfonzo Prescott helps a customer at the parts counter at the Ottawa location. 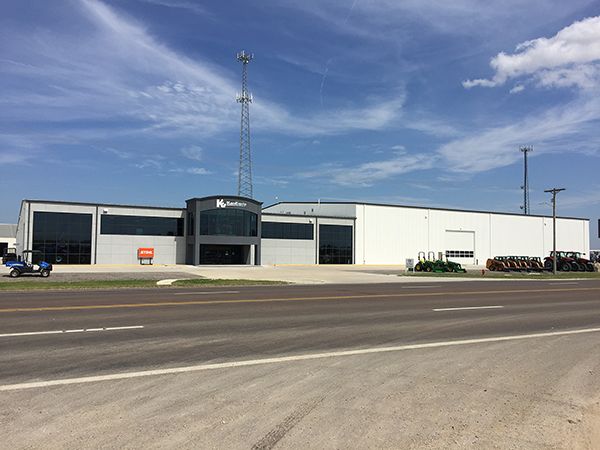 Alfonzo Prescott helps a customer at the parts counter at the Ottawa location.

The Meinhardt family has been part of agriculture for generations.

“We have show cattle, and our four kids chase them around. The farming we do is with them,” said Bryndon Meinhardt, regional manager and owner of KanEquip. Their children show Hereford cattle.

Daughter Emily Meinhardt was named ‘National Hereford Queen 2019 after being crowned in November at the American Royal in Kansas City. Emily is a junior at Kansas State University. She travels to the national shows, the Western Show and others nationwide, and enjoys handing out awards and doing all things Hereford.

“My grandpa sold his farm equipment business to my dad,” Bryndon said. “My father is the one who actually started KanEquip in 1999 — when he and a business associate, Jim Burke, took over the reins. Previously, they ran a store in Dodge City called Ford County Equipment.”

Bryndon’s grandfather has died. Bryndon’s dad is in his early 70s, and very involved in the business.

Helping farmers and ranchers troubleshoot problems is KanEquip’s goal with equipment, technology and assistance from its parts and service department.

Interestingly, their company is not primarily focused on selling brand new combines, but rather KanEquip is considered a go-to for providing solutions.

“We pride ourselves on selling tractors and combines, but we also sell implements that tractors may pull, like balers, feed wagons. A lot of these implements we sell are New Holland,” Meinhardt said.

Sometimes, a customer may not have purchased equipment at KanEquip.

KanEquip also prides itself on training their personnel to be more efficient with their time and solving problems while out at a farm or ranch.

“Time is money, so whether they’re at the counter or out at someone’s farm, we want to service them as fast as we can,” Meinhardt relayed. “We know their time is valuable.”

Meinhardt feels that precision ag products are the direction in which the farming/ranching industry is advancing. “It’s not only about GPS, but also whether it’s a planter precision to get a better stand, or whether to make their tractor run more fuel efficient at tillage.

“All this precision is helping us do that,” Meinhardt explained.

Exciting plans are in the making to automate the combines, and feature cameras that can change settings on combines multiple times per second.

“These cameras are our eyes and ears for these combines, because we can’t be in the clean-out elevator, or behind the combine watching the amount of grain being thrown over the sieves,” relayed Meinhardt, adding, “Just like the down pressure system, they’ll adjust multiple times a second. These computers can do that.

“You can put kits on existing combines, trying to fit what we have to provide solutions to customers’ problems within their budget. It’s important to us to just help make farmers and ranchers be more efficient. We want to help, so they can manage their time to do other things in their farming operation, like livestock, and being with their families.”

KanEquip also continues to grow and has agreed to take over Straub International’s five locations, in Wichita, Salina, Pratt, Hutchinson and Great Bend.

“We are anticipating an easy transition since both companies share similar brands, backgrounds and business structures,” Meinhardt said.

The transition, which is planned for mid-May, will increase KanEquip’s total locations to 14, 13 in Kansas and one in Nebraska.

More in Businesses of Agriculture (26 of 43)

Businesses of Agriculture: A stronger community with Midwest Labs

In business since 1967, as Meinhardt Farm Equipment by Jim Meinhardt

To be a leader and trusted partner in providing quality products, support, and innovative solutions to agricultural producers in the Midwest