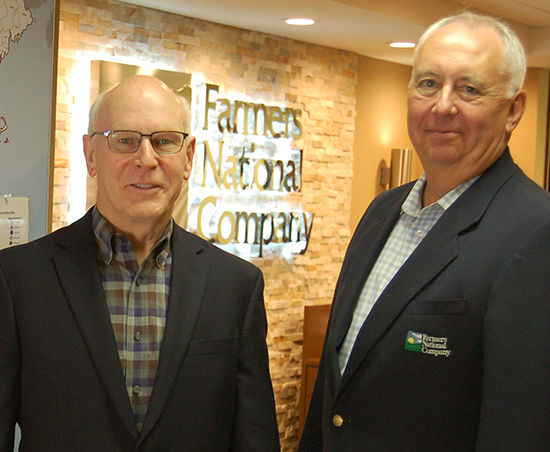 Outgoing Farmers National President James Farrell, left, stands with Dave Englund who will be taking the company’s helm upon his departure. 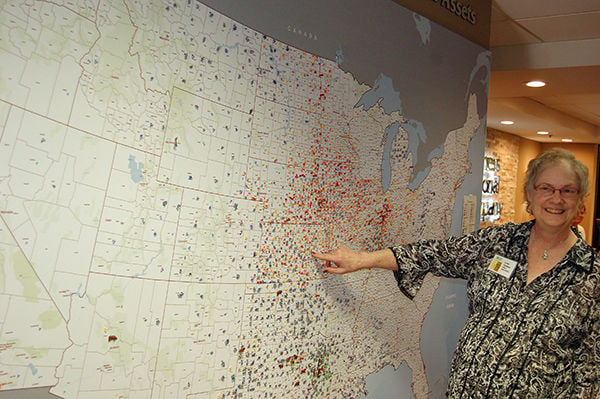 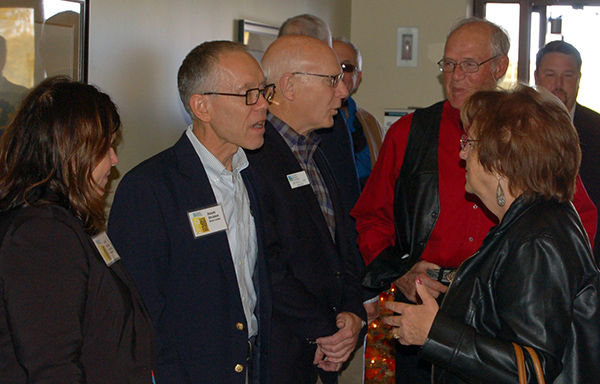 Outgoing Farmers National President James Farrell, left, stands with Dave Englund who will be taking the company’s helm upon his departure.

It was a bittersweet celebration at the offices of Farmers National Com. in Omaha Oct. 17.

The agricultural services company was celebrating 90 years in business, while at the same time coming to grips with the retirement of their president James Farrell.

Farmers National was founded in 1929, by C.J. Claassen of Nebraska. He guided the farm management company through the turbulent times of the Great Depression, growing to serve 1,000 farms for non-resident landowners.

Today, FNC is the largest farm management company in the U.S., according to Farrell. But, that isn’t all the company does. FNC expanded its services to include real estate sales, appraisals, insurance, commodity marketing, forest resource management as well as oil and gas management.

Farrell said he is proud to have been at the helm of the company as it developed over the last 15 years.

“We have no outside debt, and our great business model has allowed us to diversify into 10 business areas,” he said.

The extent of the operations that fall under the company’s banner was on display in the main reception area of the company’s offices. A 3-foot by 6-foot map of the U.S. occupied one wall. On the map were stick pins of various colors and shapes representing properties managed by the company.

It was colorful and impressive. Farmers National office operations staff worked dozens of hours to prepare the map board for the celebration. Lynn Alsman spent 55 hours just putting the pins in place.

As Farrell looked over the map, he said one of the things that impressed him most about the company was the employee ownership aspect.

“A large percentage of our employees are personally involved in agriculture,” he said. “The company’s connection to agriculture and energy runs pretty deep.”

While clients have been his favorite part of his time as president, Farrell said being part of the team has been incredibly meaningful.

“Witnessing the development of our people is the most rewarding thing about the job,” he said.

Farrell is being succeeded by Dave Englund, previously the senior vice president in charge of farm and ranch management territory. Farrell said he believes Englund and the people he has working with him can handle the consumer trends impacting the company now without any problems.

As for himself, Farrell plans to work with his brother’s company, Farrell Growth Group, based in Kansas City, Missouri. Although, he will be staying in Omaha.

“They do agriculture sales, peer meetings, benchmarking, mergers and acquisitions,” he said. “I plan on working part time.”

He and his wife love to travel and plan on doing that while he pursues his other passion in life – nature and wildlife photography.

“The company will do very well after I leave,” he said. “We have the right people in the right positions.”

Turn your old tractor tires into feeders for livestock! We