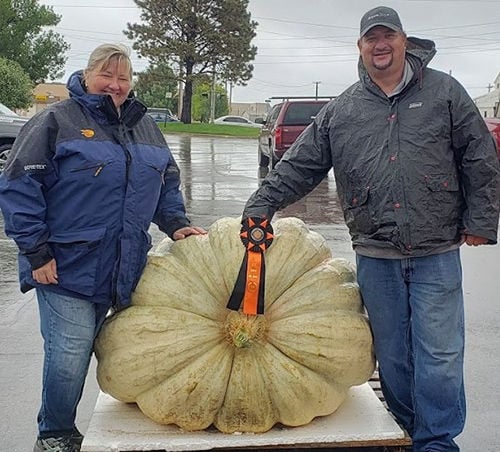 Dr. Tamra Jackson-Ziems of UNL and her husband Larry Ziems grow giant pumpkins. They had the third biggest pumpkin weighing in at 566 pounds in the Harrisburg, South Dakota weigh-off on Oct. 5. 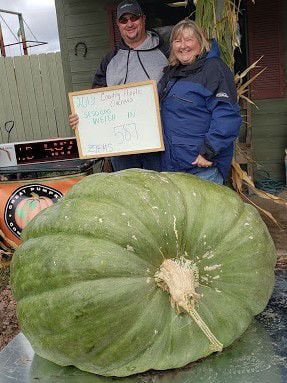 Dr. Tamra Jackson-Ziems and her husband Larry Ziems had the biggest squash at the Harrisburg, South Dakota weigh-off. The squash weighed 587 pounds.

Dr. Tamra Jackson-Ziems of UNL and her husband Larry Ziems grow giant pumpkins. They had the third biggest pumpkin weighing in at 566 pounds in the Harrisburg, South Dakota weigh-off on Oct. 5.

Dr. Tamra Jackson-Ziems and her husband Larry Ziems had the biggest squash at the Harrisburg, South Dakota weigh-off. The squash weighed 587 pounds.

While you don’t necessarily have to be a plant expert to cultivate giant pumpkins competitively, it certainly doesn’t hurt.

Dr. Tamra Jackson-Ziems, a plant pathologist at the University of Nebraska-Lincoln, started to grow giant pumpkins two seasons ago.

“My husband Larry had expressed an interest in growing giant pumpkins,” she said. “So, for his birthday two years ago I bought him some Atlantic Giant pumpkin species seeds.”

The Atlantic Giant is the kind of pumpkin that holds most of the records for largest size and weight among giant pumpkins. The couple’s goal was to grow as big a pumpkin as they could.

“We had no idea what we were doing our first year,” Jackson-Ziems said.

They wound up growing an 807-pound pumpkin. They learned a few lessons – the hard way – but they also made some friends in the pumpkin community that were willing to share some helpful hints.

“One of the things we learned was we should pollinate the female flowers ourselves,” she said. “We let natural pollinators do the job the first season. But, you have to be careful with the origin of the pollen.”

They lost three pumpkins in the first season, so in their second attempt, they played the numbers game, Jackson-Ziems said.

“We planted eight plants this year,” she said. “When they are getting started you don’t know which pumpkin will wind up being your star.”

They also learned that starting the seeds indoors helped. They could then transplant them when temperature extreme hazards were minimized. Another helpful tidbit from their like-minded gardeners was to cover the pumpkins to prevent them from being exposed to too much sun.

“If the pumpkin is in the sun too much the shell begins to harden,” Jackson-Ziems said. “This stifles growth.”

And grow they do. While some large pumpkins can grow from 12 to 15 pounds per day, a giant pumpkin can be coaxed to increase its weight from 30 to 50 pounds a day.

“There’s something special about watching it grow each day,” she said. “You don’t even need a farm. The only thing you need is fertilizer and water and about 300 square feet.”

Harmful temperatures and wildlife are really the only things that can damage a pumpkin. In the beginning some growers turn the pumpkin, but after a short time that becomes impractical due to size and the fragility of the shell, said Brent Cernick, a competitive pumpkin grower from Wahoo, Nebraska.

On Oct. 5, Cernick set the Nebraska state record for biggest giant pumpkin at a weigh-off in Anamosa, Iowa. The Wahoo pharmacist’s pumpkin tipped the scales at 1,492.5-pounds. He also grows Atlantic Giants.

“Saying I grow Atlantic Giants is like a farmer saying he grows corn,” Cernick said. “There are several delineating factors in types of pumpkin just like in corn.”

The parent strain of the seed used for the state record pumpkin came from Wisconsin. He purchased it at a seed auction, he said.

Jacskon-Ziems and Cernick are members of the Great Pumpkin Commonwealth, an organization which fosters the competitive hobby of giant pumpkin growing. The GPC keeps records of plants’ pedigrees. If they are available, others can buy seed from that line.

Results from weigh-offs each year are kept on the Bigpumpkins.com website – not only for pumpkins, but for squash and long gourds as well as watermelons and tomatoes. The site also has grower diaries where enthusiasts share their information.

The Pumpkinfanatics.com website shows the family trees of champion pumpkins. They also list seed statistics and grower metrics. This is part of the overall open-mindedness of the giant pumpkin growing community.

“The genetics of giant pumpkins are phenomenal,” said Jackson-Ziems. “But, you don’t have to be a plant expert to enjoy extreme gardening. Anyone can have a good time with it.”