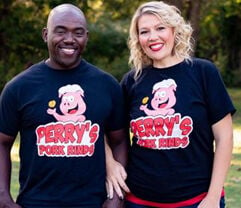 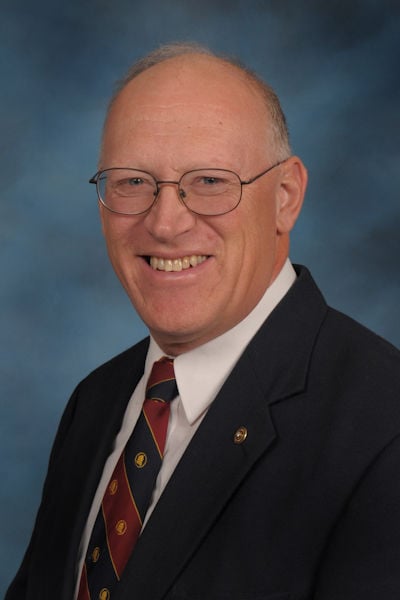 The thank-you note came from the office of former President George W. Bush, expressing appreciation for the wonderful pork rinds provided by this remarkable business.

Thaddeus and Kelly Perry are owners and founders of Perry’s Pork Rinds in Bronson. They grew up in southeast Kansas, married and moved to Bronson to be near family.

Thaddeus, a butcher, would occasionally fry pork rinds in the backyard as a hobby. Kelly remembered delicious pork rinds from the Ozarks.

When Kelly and Thaddeus wanted to earn some extra money for a cruise, they decided to sell pork rinds and funnel cakes at an upcoming fair in Missouri.

They looked online for seasonings and USDA-inspected pork rinds, borrowed a kettle, and set up a tent at the fair. Then a thunderstorm came through and ruined any chance of cooking.

“I cried,” Kelly said. “But my husband is the hardest working guy I know.  After the storm passed, he cooked more pork rinds all night long.”

The pork rinds were a big hit. Kelly and Thaddeus were soon headed to his niece’s wedding in Manhattan and she posted on Facebook about the few bags of pork rinds they had remaining. When she checked messages after the wedding, she realized the rinds were in high demand.

“We sold all we had left and paid for our cruise in full,” Kelly said.

Kelly and Thaddeus set up their own LLC as Perry’s Pork Rinds in September 2017.

“We haven’t stopped since,” Kelly said.

“Several customers were interested in nutritional facts so we contacted Dr. Elizabeth Boyle and Dr. Fadi at K-State. They were so helpful with our nutrition labeling,” Kelly said.

The Perrys also joined the Kansas Department of Agriculture’s From the Land of Kansas program.

“We use soybean oil and we heat it to just over 400 degrees,” Thaddeus said.

“Soybean oil is a heart-healthy oil and it smells better than lard,” Kelly said. “We hand-season them. Our pork rinds are unique flavors, a very fresh, light crunch that’s not hard, a really good, low-carb snack option."

“Everything we do is because we listen to our customers,” Kelly said. “I would post different flavors on Facebook and ask our customers to vote on them."

“I made a bacon, jalapeño, cheddar-cheese, pork-rind meatloaf,” she said. “Anything that calls for breadcrumbs, you can use pork rinds for. They’re great in chili, taco salad, and other dishes. It’s more than just a snack, it can help make a family meal."

Perry’s Pork Rinds have gone to all 50 states plus Canada and as far away as Saudi Arabia. The office of former President Bush ordered products and sent a complimentary thank-you note afterward.

Sales in 2019 were up 328%. Perry’s Pork Rinds was named the Kansas Department of Commerce Minority-Owned Business of the Year in Sales and Distribution.

The Perrys plan to open the Famous Perry’s Pork Rind Country Store and production facility in a new building along Highway 54 at the site of a former gas station. This will feature other Kansas products including in-house made fudge, saltwater taffy, jerky, smoked cheese, popcorn and more.

The note came from the office of former President George Bush, thanking them for the product. We commend Thaddeus and Kelly Perry for making a difference with hard work and entrepreneurship with this tasty snack. For that, I am thankful.