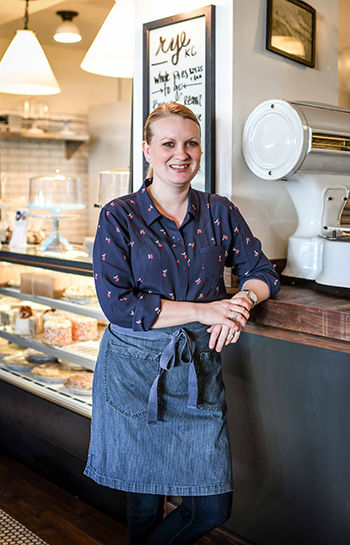 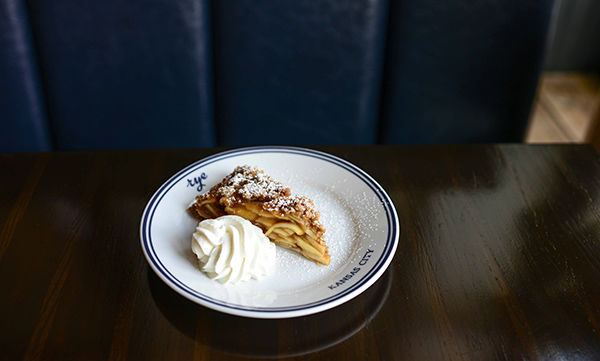 Dutch apple pie was selected the best pie in Kansas by People Magazine. 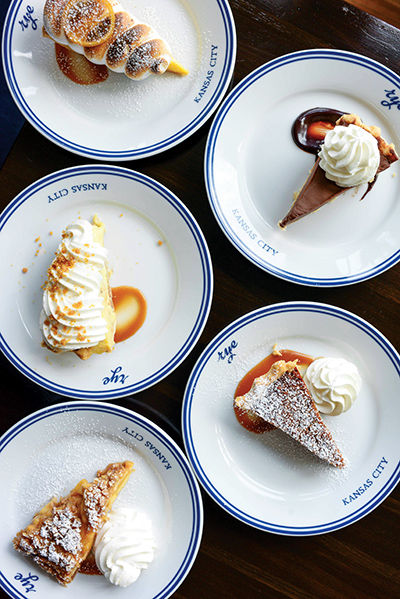 Pie slices sit on display at one of Rye Restaurant's two locations.

Dutch apple pie was selected the best pie in Kansas by People Magazine.

Pie slices sit on display at one of Rye Restaurant's two locations.

Megan Garrelts’s love of baking pies has a long history.

Working in kitchens since ag 14 led her to the Culinary Institute of America in New York.

“Desserts are all I’ve ever known,” said Garrelts.

Her Dutch apple pie won top honors in Kansas this fall in People Magazine list of “The Best Pie in Every State” (People Magazine, Oct. 7, 2019). The magazine said Garrelts’s pie is “not to be missed.”

Garreltes is proprietor and executive pastry chef at Rye Restaurants and Bluestem Restaurant in Leawood, Kansas, and Kansas City, Missouri. Her husband, Colby Garrelts, is the executive chef and co-owner.

The pastry chef grew up in Illinois, outside of Chicago, and met her husband while he was working at a Chicago restaurant.

“There was always a pie growing up, which I loved,” she said. “Midwesterners love them too.”

Pies weren’t always a feature at restaurants, so she and her husband decided when they opened the restaurant, there would be pies.

Getting selected by People Magazine who teamed up with EATER; a food and dining network of sites and brand, was an involved process.

“They called me three months before,” Garrelts said, noting that EATER writers have visited her restaurants before and submitted their top picks.

Megan is a James Beard Award semifinalist for Outstanding Pastry Chef 2017-2019. Their cookbook “Made in America” features recipes from Rye, in addition to chef Megan’s pie crust. It’s sold at their restaurants, and on Amazon.com.

Fans of their pies will be excited to hear that plans to ship pies are in the works, within a year.

“I probably wouldn’t be alive if I did it all,” she said.

She works with a pastry chef who leads the team of eight people under her. They have a lot to bake.

The team also creates pastries year-round at the other Rye Restaurant in Leawood, Kansas. Pecan walnut, pumpkin and apple pie are flavors that circulate seasonally. All are made with natural, fresh products – nothing frozen.

A third restaurant, the upscale Bluestem, features progressive American fine dining with a tasting menu in the dining room or ala carte menu in its bar.

The names Rye and Bluestem have Midwest significance.

“Rye is a working wheat. Bluestem is an ornamental,” Garrelts said. “We use rye wheat and rye whiskey too.”

They’re most known for their fried chicken, what she calls a “Midwest comfort food.” They also have a reserved steak list with prime cuts including tomahawk chops, lamb and ribeye. They feature salmon, local trout, barbecued ribs and burnt ends.

“The best of our Midwest region,” she said.

Local farmers contribute. The Garrelts grow their own tomatoes, okra, summer squash and herbs in the summer on their family farm, Flat Rock Field Farm in Parker, Kansas.

As for secret ingredient, Garrelts said the Dutch Apple Pie has half butter and half lard in the crust to give it a great texture and flavor. They use a mix of Fuji apples and traditional fall spices. To bring the flavor, cinnamon, nutmeg and cardamom give it a nice apple flavor, with streusel topping.

“We’re happy Kansas City has embraced us as they have. We’re glad to be in the Midwest.” Garrelts said.