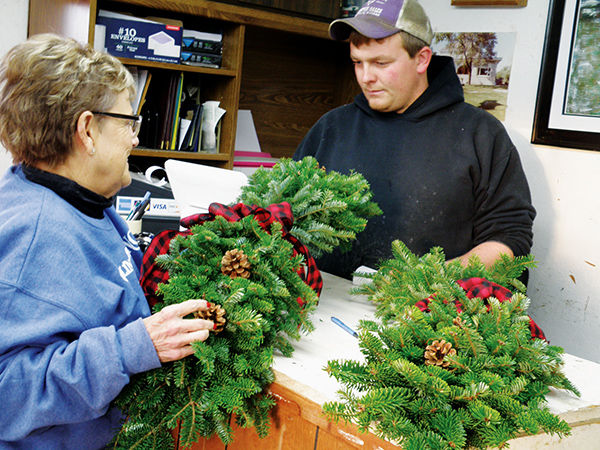 Carolyn and Tyler Kasl organize swags for the holiday season. 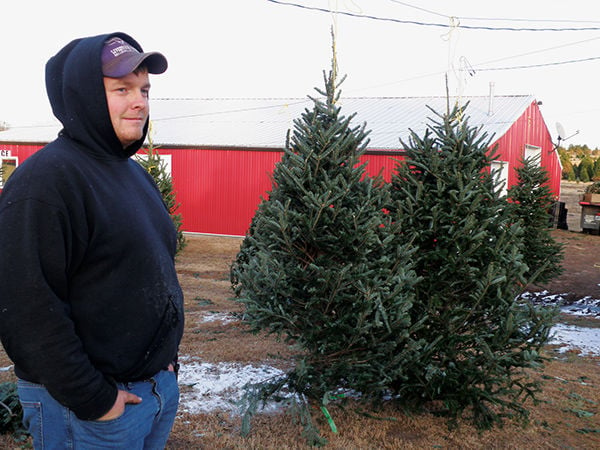 Tyler Kasl stands by the cut Christmas trees at his Belleville, Kan., farm. The Fraser firs, hanging on the line, are a popular variety. People also like to cut their own, he said. 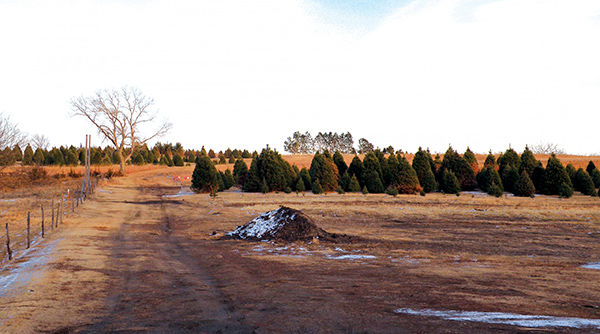 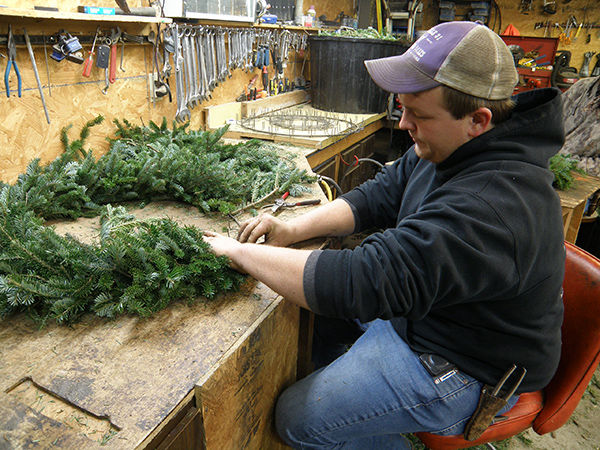 Tyler Kasl creates a wreath from pine boughs. He took over operations of Kasl Christmas Tree Farms in Belleville, Kan., after his grandpa, Mike Kasl, passed away last year.

Carolyn and Tyler Kasl organize swags for the holiday season.

Tyler Kasl stands by the cut Christmas trees at his Belleville, Kan., farm. The Fraser firs, hanging on the line, are a popular variety. People also like to cut their own, he said.

Tyler Kasl creates a wreath from pine boughs. He took over operations of Kasl Christmas Tree Farms in Belleville, Kan., after his grandpa, Mike Kasl, passed away last year.

At the young age of 24, Tyler Kasl of Belleville, Kansas never could have imagined that after working with his grandpa creating fresh, handmade wreaths and selling homegrown trees every Christmas season since he was 5, that suddenly, this year he would be overseeing the family business on his own.

The longtime owner of Kasl Christmas Tree Farm, Mike Kasl, unexpectedly passed away Nov. 15, 2018, in the middle of his peak season. He was 75.

It was a jolt to the family and close-knit community in north central Kansas. Mike was known for his jolly personality and the chuckle that went along with the twinkle in his eyes. He started the farm in 1980 by planting Scotch pine and Austrian pine trees.

This holiday season, his grandson Tyler has stepped up, and along with Tyler’s dad Scott Kasl and grandma Carolyn Kasl (Mike’s widow), the wreath-making and homegrown tree business is flourishing.

“I really didn’t know how it’d work out, with Tyler working all day with the city (of Belleville) then handling everything here at the farm, but we’re all working together,” Carolyn said.

Scott agreed: “It’s emotional, but we’re all in it together.”

In late November, their season was fully underway. Tyler said they’re working every hour possible during their peak season, which finally calms down just before Christmas, around Dec. 22.

People come to the farm to pick their holiday tree or cut their own.

“The Fraser fir trees, hanging on the line, are real popular. People enjoy choosing those,” Tyler said. “Other customers like picking their own Scotch pine or Austrian pine tree out in the field here, and we’ll cut them, or sometimes they like to hand-saw them. Sometimes they want the full experience.”

“Gov. Kelly was real excited about the wreath we brought,” Scott said. “The governor was also pleased with the way that the organization (Kansas Christmas Tree Growers) operates, and she appreciated the tree.”

The honored invitation to transport one of their homegrown Christmas trees or wreaths to the Governor’s mansion had always been a treat for Grandpa Mike, but several years ago, Mike decided to joyfully share that opportunity with another tree farmer in their organization.

Wreaths are a big part of the Kasl business. For years, Mike worked with organizations who ordered numerous wreaths.

“We made 2,000 wreaths last year, and sold about 250 trees to organizations in Kansas and Nebraska including a ladies group, Boy Scouts, schools, and we’re close to that again this year,” Carolyn said.

Trends in Christmas wreaths have changed this year.

“People now are going for the bigger wreaths,” said Tyler, who created 1,500 wreaths by Thanksgiving.

Carolyn and her daughter-in-law, Laurie, make large, colorful bows for the wreaths and garland swags. Helpers Justin Kemp and Brian Novak clip the brightest green branches to be made into wreaths.

This year is one of transition for the Kasls, but they’re pleased to offer their services.

“It’s different. Somebody else sitting in Mike’s chair now. But it’s Tyler. He always worked beside Mike anyway,” Carolyn said.

Tyler also has his eyes on the farm’s long-term plan. This spring he’ll plant 750 Scotch pine trees, and he’s looking to help other farmers grow, too.

“I want to help farmers out, who want to start getting into the business,” he said.

But that takes time. It takes six to eight years to grow the trees in Kansas, he said. The Kasl farm has 125 trees in the 6- to 10-foot range for every year. Tyler aims to increase that to 200 per year. That’s what Grandpa Mike used to do, he said, and it helps give some cushion in case they run into a drought year.

Tyler is planting seeds of Grandpa Mike’s legacy for the holidays and beyond.

Amy Hadachek is a freelance writer who lives on a farm with her husband in north central Kansas. She's also a meteorologist and storm chaser. Amy can be reached by email at: amy.hadachek@midwestmessenger.com