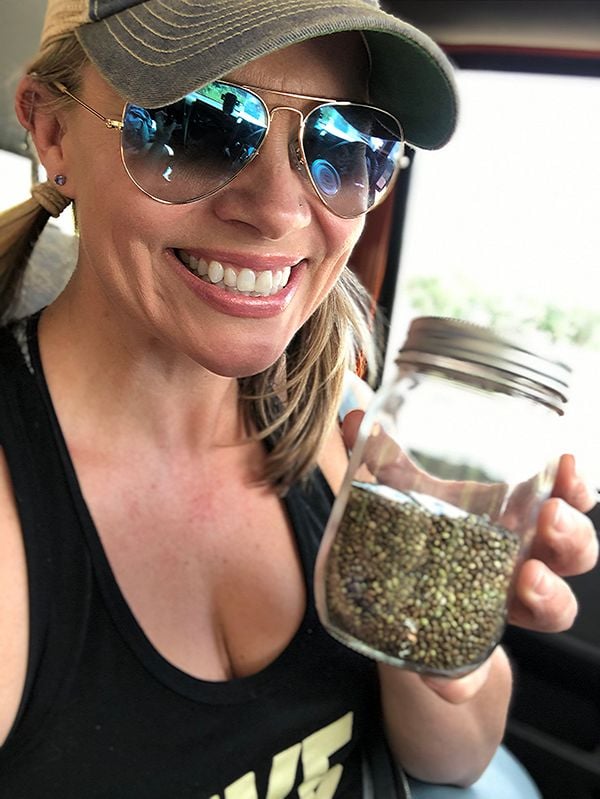 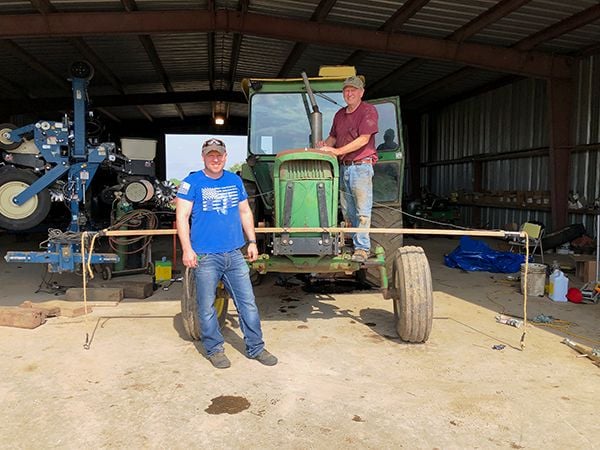 As their new Monosem vacuum planter doesn’t have a marker system, the Loroff siblings summoned genes of ingenuity they inherited from their father Phillip, a lifelong farmer, by jury-rigging their dad’s GPS-less tractor using good old-fashioned rope, tape, a board, and nuts for weights. Garrett, left, and Phillip, right, approved of the day’s work. 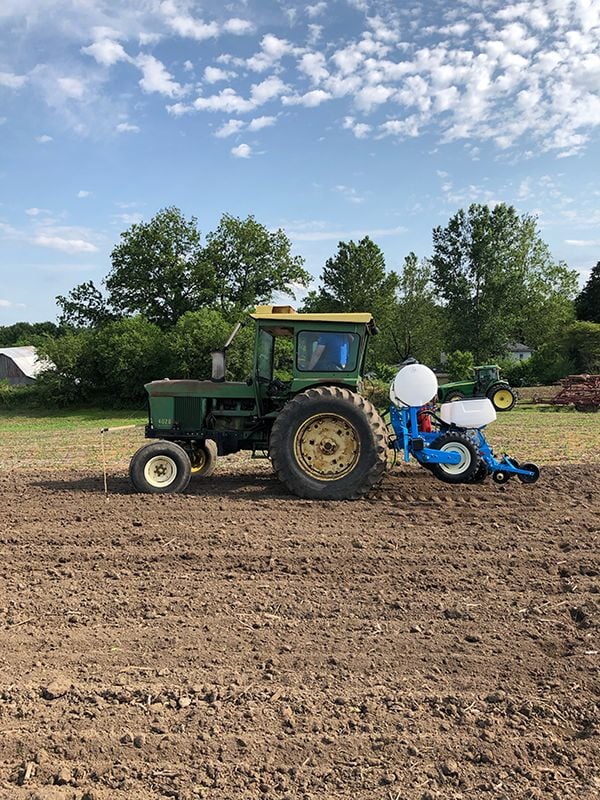 Garrett rides shotgun while his dad Phillip drives the tractor as they plant their first industrial hemp crop on a 6.25-acre patch of the family’s Troy, Kan.-based farm. 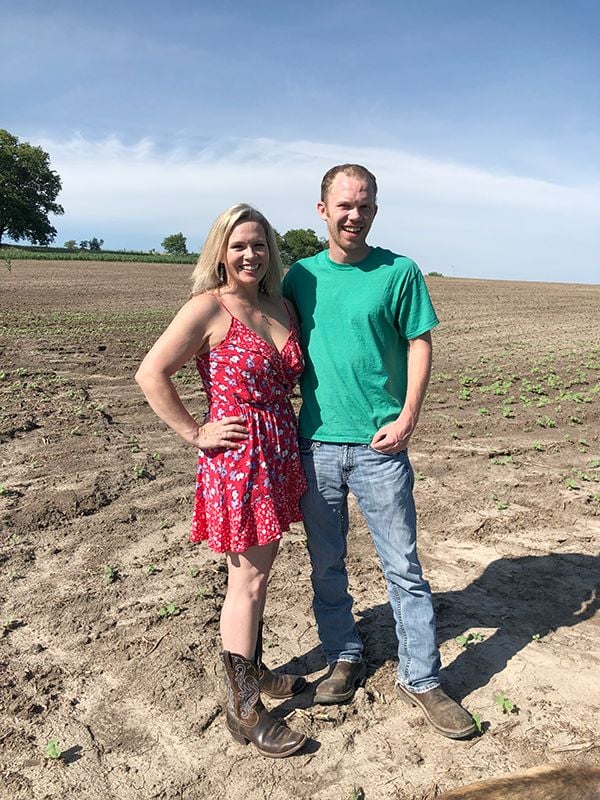 Mandie and her brother Brannt check out growth on their industrial hemp crop acreage. The trio aren’t always in the fields together, with Mandie residing in Lawrence, Kan., Garrett in Atchison, Kan., and only Brannt living near the farm in Troy, Kan., but between their schedules and with help from parents Phillip and Patricia, they get the job done.

As their new Monosem vacuum planter doesn’t have a marker system, the Loroff siblings summoned genes of ingenuity they inherited from their father Phillip, a lifelong farmer, by jury-rigging their dad’s GPS-less tractor using good old-fashioned rope, tape, a board, and nuts for weights. Garrett, left, and Phillip, right, approved of the day’s work.

Garrett rides shotgun while his dad Phillip drives the tractor as they plant their first industrial hemp crop on a 6.25-acre patch of the family’s Troy, Kan.-based farm.

Mandie and her brother Brannt check out growth on their industrial hemp crop acreage. The trio aren’t always in the fields together, with Mandie residing in Lawrence, Kan., Garrett in Atchison, Kan., and only Brannt living near the farm in Troy, Kan., but between their schedules and with help from parents Phillip and Patricia, they get the job done.

There’s more to come on the Loroffs’ industrial hemp crop for the 2019 Kansas Industrial Hemp Research Program. Check the Midwest Messenger for updates, or visit www.midwestmessenger.com.

That’s what the Loroff siblings have figured out so far. It’s really, really complicated. But when they got the news that the Kansas Department of Agriculture was searching for producers to grow industrial hemp, they were all in, no matter the obstacles.

“(We) were having a discussion in early January about industrial hemp on the farm bill, and (Brannt) asked me if I wanted to go into business together,” said Mandie Loroff, the eldest sibling of their newly formed business partnership, Three Kinsmen. “I said, ‘Of course’, and that was really how it all began.

“That day, I started learning everything I could about industrial hemp.”

The green thumb of the group, Brannt — who splits his time between working at MGP Ingredients in Atchison, Kan. and helping his parents with the family farm in Troy, Kan. — had long been watching the legislative developments on industrial hemp. It’s a crop that has intrigued him for years, not only as a farmer, but as a future business owner.

The Loroff farm has been in the family for generations. Mandie, Brannt and their brother Garrett grew up working that land alongside their parents Patricia and Phillip. Once their parents are ready to retire, Mandie made the future clear: “We’ll never sell it.”

“We knew we had to get involved in some way, shape or form,” she explained. “Brannt wanted to diversify the farm and do something new.

“When we started looking into this project, it was the most excited I’ve been about a project in a really long time. This is something that is ours, and our success surely depends on our abilities to make that happen.”

Almost immediately out of the gate, the Loroffs hit their first hurdle — the application. In order to be considered for the Kansas Industrial Hemp Research Program, they had a slew of forms to provide: a license application, waivers for background checks, and finally, a research proposal — the puzzle piece that could make or break their participation. They needed a great research proposal, something to set them apart from the other potential hemp producers.

The only problem was, no one really knows what they’re doing yet.

Industrial hemp has been an illegal crop in Kansas for more than 80 years, so as expected, the Loroffs couldn’t find any Kansans knowledgeable from a production standpoint. After expanding their reach, they located reliable sources in Colorado who were willing to share insights on growing hemp — though many were not.

“A lot of people in the industry like to hoard knowledge instead of sharing because they are concerned someone is going to ‘take’ something from them,” Mandie commented. “Really, it would be better for the industry if everyone worked together to learn from each other. Industrial hemp has its own set of quirks and logistical needs that are much different than planting soybeans or corn.”

The Loroffs soon found out about all of those “quirks”. The process of putting together their research proposal was, according to Mandie, a “journey through uncharted waters.”

It really is complicated

For all of its potential uses, industrial hemp has a different seed, and all of those different seeds are grown, in a word, differently. And there’s no Industrial Hemp for Dummies to make quick work of the decision process on what to plant.

“It’s the blind leading the blind,” Mandie said with a chuckle. “You have to talk to people and figure it out.

“We weren’t even sure we could get our hands on any of those seeds (we wanted). So we listed every single seed variety on the application, so we could be sure to find a seed.”

The Loroffs are growing industrial hemp for cannabidiol (CBD) oil, which means the growing technique is completely different than industrial hemp that would be harvested for its grain or fiber. Hemp for CBD oil is planted more like a garden, Mandie explained, with plenty of space between each plant so that they grow outward and bushy, rather than tall and spindly.

As the Three Kinsmen crew debated on how best to plant their first crop, they decided upon two different row spacings, to see which would provide the best plant for oil harvesting.

“On CBD hemp, you’re dealing with row spacing and the population,” Brannt explained. “On an acre of hemp, four foot (row spacing) is about 2,700 plants. Six-by-four was about 1,800 plants per acre.

Not only does the crop take up a lot of room in the field, but it’s a finicky seed — small, like a grain of wheat — and expensive.

Mandie estimated that they invested nearly $30,000 in the hemp seeds alone for their first crop. That doesn’t include the Monosem vacuum planter they custom-ordered to be built to exact specifications for industrial hemp seed planting.

The custom planter, Brannt explained, ensures that the tiny hemp seeds are planted in the correct amount per hole, with minimal waste being dropped.

Growing industrial hemp for CBD oil production is a delicate process, to say the least.

Pesticides will kill the plants entirely, meaning the Loroffs had to request their neighbors not crop dust too near the hemp acreage. Using machinery to combat weeds can also damage the oil pods, which means they can only manage weeds the old-fashioned way — a hoe and a lot of hot hours under the sun.

In October, when the plants are fully developed, they’ll be hosting a harvest party: 15 family members and friends — all pre-approved by the Kansas Bureau of Investigations through background checks — harvesting hemp plants by hand for about five days or more, Brannt estimated.

That’s only if the crop isn’t hot, though: The KDA will test the plants for their THC levels prior to harvest, and if they exceed the .3 percent tetrahydrocannabinol (THC) limit, the entire crop will be destroyed.

It also depends on whether the all-female crop required for CBD oil production is compromised by a rogue male plant that they don’t remove in time — if the crop pollinates, the plants go to seed and lose their oil pockets.

As if that’s not enough, industrial hemp is also hermaphroditic. If just one hemp plant gets stressed, it will turn into a pollinating male and potentially ruin the entire crop.

Between the weeding, watering, and watching for distressed plants, the Loroffs will be spending a good deal of time walking their rows this summer and autumn.

The complications of growing an industrial hemp crop didn’t deter the Loroff siblings. The thought of a lost crop didn’t give them hesitation. The fact that there’s really no crop insurance or federal subsidization for industrial hemp didn’t stop them, either. They were “in it to win it” — Garrett drove their finalized research proposal to Manhattan to submit it in person on Feb. 26, and it was unanimously approved as one of the best proposals the committee had read.

On June 14, when they received the new Monosem vacuum planter, they didn’t waste another minute — their cherry wine industrial hemp seed went in the ground that day, 6.25 acres total.

They had hemp plants popping early, within five days after planting, and the tiny plants are currently flourishing under the Kansas sun and rain. Hopes are high and excitement is growing.

“Industrial hemp is such an amazingly diverse crop as a whole,” Mandie said. “Textiles, flour, oil, bedding — the list is extensive. … The industry is discovering new possibilities for this plant every day.

“Since industrial hemp is a fledgling industry, if you want to be a contender, you must get in on the action when (you can be) first, or play catch-up when everyone else is already succeeding. We are getting in on the ground level.”