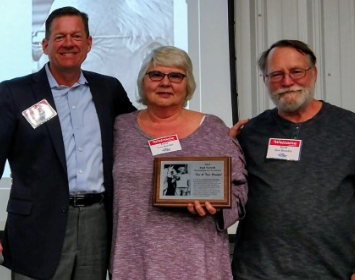 Ken and Tera Benefiel received the Bud Newell Award for dedication to Equifest of Kansas volunteer management since 2006. Presentation was made by President Dennis Goodwin during the recent annual meeting of the Kansas Horse Council in Manhattan.

Justin Smith, state veterinarian for the Kansas Department of Agriculture, spoke at the recent annual meeting of the Kansas Horse Council in Manhattan.

Ken and Tera Benefiel received the Bud Newell Award for dedication to Equifest of Kansas volunteer management since 2006. Presentation was made by President Dennis Goodwin during the recent annual meeting of the Kansas Horse Council in Manhattan.

Justin Smith, state veterinarian for the Kansas Department of Agriculture, spoke at the recent annual meeting of the Kansas Horse Council in Manhattan.

“The Kansas Horse Council provides the state’s equine industry with leadership and direction through education, promotion, and public policy advocacy.”

Reminder of such important mission was presented to open and verified throughout that group’s recent annual meeting in Manhattan.

Verifying horses’ importance to Kansas’ economy Dr. Justin Smith, state veterinarian for the Kansas Department of Agriculture, related statewide statistics. “There are 75,000 horses and ponies as well as 4,000 donkeys and mules in the state,” Smith said.

This is a virus that can cause affected equine to have fevers, anemia, weight loss and other ailments.

“While some horses recover quickly from the symptoms appearing healthy, they remain source of disease transmission to other equine. Thus Coggins testing is required to reduce spread of the syndrome,” Smith emphasized.

One positive case of Equine Infectious Anemia (EIA) has been confirmed in southwest Kansas this year. “That horse was euthanized, and other horses on the premises were quarantined for 60 days,” Smith said.

Importance of veterinarians attaching horse photos to Coggins papers rather than hand drawing on the forms was stressed.

In addition to EIA, horses with rabies, encephalitis, and East and West Nile Virus must be reported to Smith’s office.

“Kansas had its first ever case of vesicular stomatitis (VS) during October in Sherman County,” Smith verified.

VS is a viral disease that mimics foot and mouth disease and can spread to cattle. “There were 900 VS quarantines in Colorado during the past year,” Smith noted.

Vaccination of horses to prevent rabies was recommended after a confirmed case was reported, the veterinarian said.

Additional information about current horse disease concerns can be found at www.equinediseasecc.com.

E-bikes will be allowed on multi-use trails in the system, with increased signage educating trail users on proper etiquette.

“The worst flooding in history occurred at 18 of the 20 state parks this year,” Lanterman said. Trails remain closed at Kanopolis, El Dorado, and some areas of Perry.

Appreciation was expressed to those working on cleanup and maintenance of public trails in Kansas.

Among those recognized were Back Country Horsemen of Kansas, Kansas Trails Council, Kansas Horse Council, saddle clubs, and other volunteers.

“Most trail work had to wait for flood waters to recede, but volunteers have still logged more than 3,000 hours,” Thomas said. “Based on Back Country Horsemen of America formulas, that’s an equivalent of $130,000 in trail work.”

Benefit trail rides have raised more than $117,000 since inception for campground and trail improvements.

President of the Kansas chapter of Back Country Horsemen of America (BCHA-Ks), Erin Glassman is the new KHC trails director.

“I am working on building positive working relationships with park managers,” Glassman said. “It’s essential to be respectful of closed trails, while repairs are being made. Still, we need to collaborate with the other trail disciplines.

“Less than 2 percent of Kansas lands are open for public use,” Glassman pointed out. “So, we must build positive working relationships with land managers caring for what we are allowed to use.”

More than $133,950 has been given in KHC Foundation scholarships to youth with equine career interests, Staten reported.

A silent auction during the KHC’s sponsored Equifest is the primary source of the funding, she said. Support also comes from Arts at Equifest.

“The search continues for a chairperson for the KHC Foundation,” Staten pointed out.

Increased involvement of support is being sought from FFA and 4-H organizations possibly with student projects or gift baskets.

“It was very exciting to see the generosity of folks donating and bidding on services supporting the scholarships,” Staten appreciated.

Updates were given by Staten on the Kansas Equine Directory, the new KHC website, and 2020 Equifest.

“The KHC is working to engage representatives from disciplines and breeds to share information and events,” Staten said. “Outreach and communication efforts are being increased.”

Ashley Purdin is coordinating a Battle of the Breeds at the 2020 Equifest, March 6-8, in Salina.

Tera Benefiel reviewed volunteer needs at Equifest and how to get involved. “Volunteers receive a t-shirt, admission and a raffle ticket,” she said. Signup can be done at www.equifestofks.com.

Ken and Tera Benefiel were named the Bud Newell Award recipients for their dedication to Equifest volunteer management since 2006.

Additional information can be found at www.KansasHorseCouncil.com.

Frank J. Buchman is a rancher and writer located in the Kansas Flint Hills.

Blue Heeler/Australian Shepherd-mix, 12-weeks ready to go. Up to date