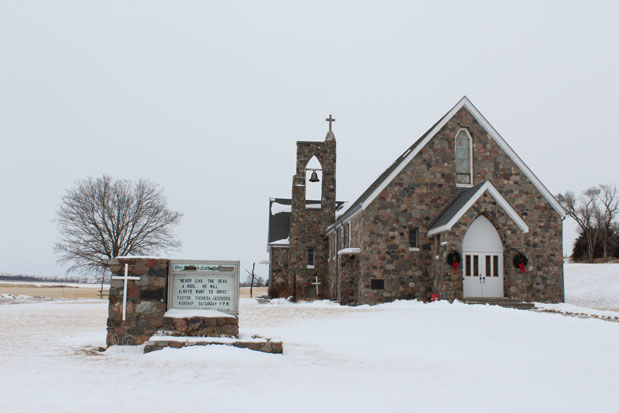 Our Savior’s Lutheran Church, known as the Stone Church, sits above the James River south of Menno, S.D. For years, the church was just a basement until members gathered field rock to build their new church in the late 1940s. 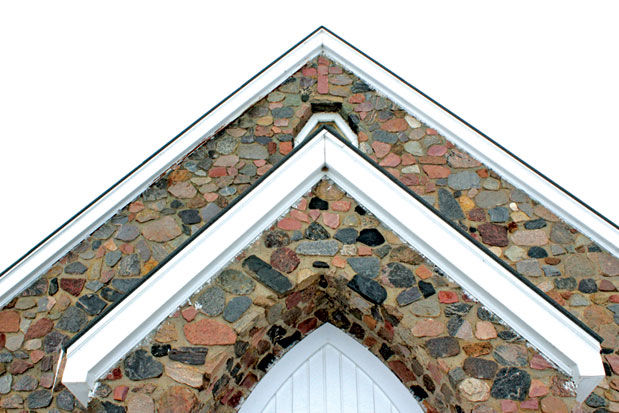 Local field rock makes up most of the Stone Church, officially Our Savior’s Lutheran near Menno, S.D., but a few pink stones forming a cross at the peak of facade were collected in Norway, the ancestral home of the church founders. 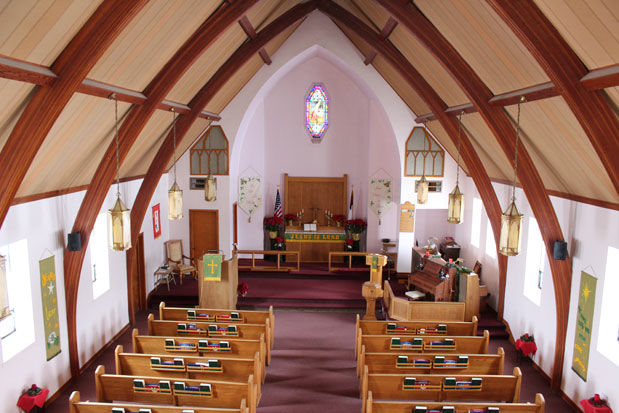 The inside of the Stone Church near Menno features a stained glass window over the alter depicting Jesus in the Garden of Gethsemane. 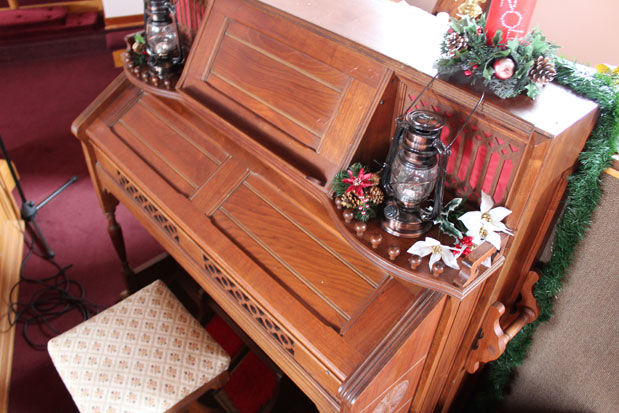 The pump organ at Our Saviors Lutheran Church near Menno, S.D., is decorated for Christmas.

Cars are parked outside Our Saviors Lutheran Church when it was just a basement with a roof. Members worshiped in the basement for about a decade while building plans were put on hold in part due to World War II.

Phil Gunderson and Lloyd Sorlien remember when their church was just a pile of field rocks. Now it’s a uniquely constructed stone church tucked away in the rolling hills that descend into the James River Valley south of Menno, South Dakota.

When Gunderson and Sorlien were young in the 1940s, Our Savior’s Lutheran Church was just a basement with a roof. The congregation had plans for a grander place of worship, but they were put on hold during World War II while supplies went to war efforts.

When the focus returned to home, members gathered rocks tossed at the field’s fence lines after tilling. For some of the stones, they went as far as Meridian Corner, 14 miles away.

To cap it off, member Jarle Foss provided pink rocks from one of his trips to see family in Norway. The stones were fashioned into a cross at the front peak of the building.

“Today they might have a problem going through customs with rocks in their suitcase,” church member Curt Ulmer said jokingly.

The church got its start long before the stones were fashioned into a building. Norwegian immigrants settled the river valley and soon desired a place to gather and practice their religion. A group of them gathered Christmas Day 1871 to organize a church that became known as the James River Congregation.

They met him homes, and visits from pastors were few and far between. It wasn’t until 14 years later that they built their first church. Soon after, undisclosed “disputes” caused the congregation to split. In 1889, several members organized their own church called the Norway Congregation, and within a decade, they had their own church, too.

The Norway Congregation church had been finished for less than three years when a tornado demolished the building. They rebuilt the following spring in 1903.

The James River and Norway congregations operated separately until early 1920 when they decided to reunite, becoming Our Saviors Lutheran. In 1935, they decided to build a church together and that it would be located at the midway point between the east and west churches.

Effects of the once-divided church is still felt in one way.

“They have their places,” Geneva Sorlien said.

Members of the reunited church planned from early on to build the basement first and add on later. They didn’t realize that a world war would interrupt plans. For years, services were held around small alter in the basement. Babies were baptized there, young people were confirmed and couples were married, according to church history books.

Work on the building started in 1948. Children of the congregation helped gather rocks. Men split them with 10-pound hammers.

Gunderson remembers when the cornerstone was laid with a ceremony in October 1948. A time capsule inside the engraved stone holds Bibles in English and Norwegian and local newspapers, according to his memory.

“I was standing right next to the preacher that put it in there,” he said, matter-of-factly from behind his sunglasses. Gunderson spent more than 40 years on the road playing guitar. He keeps his hair long, though it’s white now, but he’s happy to be back to the place his family has called home for so long.

His great-great-grandfather was a founding member of the church. Sorlien’s grandfather was a church founder, too. Gus Evenson lived across the river and would come to church by boat when the road was flooded.

At the time construction started at the church site, a newspaper article touted the well-chosen spot. Despite high water in the spring, the church basement hadn’t flooded for 13 years, it said.

That didn’t remain the case. Members have become so used to sandbagging and making efforts to keep water out of the church that they put the piano on blocks and are ready to roll up the basement carpet when the time comes.

The year 1984 was particularly bad. The dam broke at Menno Lake about 6 miles upstream, and members worked quickly to lay sandbags around the church and keep the water from coming in the basement windows.

“That really put a raise in the river,” Curt Ulmer said.

Floods haven’t been quite as bad since then, but excess water remains a problem. When Pastor Theresa Jacobson first visited the church before she began her call there six years ago, she thought she was going to be serving a lakeside church.

“I had this picturesque scene of this little lake,” she said.

It turned out that parking lot was flooded that year and the scenic waters were not so welcome.

While the river can be a problem on occasion, it’s also been the site of fun church gatherings through the years.

Youth groups held ice skating parties and bonfires on the river in the 1950s. One family would skate down the river to attend.

Though Our Savior’s Lutheran no longer hosts Sunday School, youth programs are still important. All kids from the community are invited to three full days of Bible Fun Days in the summer, and older kids help put it on.

Father-son and mother-daughter luncheons were popular in the past. The men used to serve the women’s lunch, and the women would cook for the men. Traditional Norwegian lutefisk and lefse were served at the annual meeting.

“We ate a ton of lutefisk down here (in the basement),” Gunderson said.

A newer special event is held to start the Christmas season. On the first Saturday in December, the community is invited to an old fashioned Christmas service. Children dress up like the nativity, and adults are asked to wear old fashion dresses and suits.

The Christmas tree is decorated with gold and white Chrismons. The ornaments fashioned from tradition Christian symbols were made by ladies of the church in the 1950s.

Barb Ulmer plays the old pump organ for the special service, and the congregation sings Silent Night with a verse in Norwegian and a verse in German. Kids get a treat of peanuts and an apple.

It’s a nice way to kick off the Christmas season, and it’s a good reminder of why we celebrate Christmas, Pastor Jacobson said.

“It kind of sets the tone for everything,” she said.

The church fills with people from near and far. Visitors from as far as Sioux Falls and Beresford make a point to attend.

“They look forward to it every year,” Curt Ulmer said.

Jacobson is a pastor for both Our Savior’s and Grace Lutheran Church in Menno. The Stone Church hosts services Saturday nights and on Wednesdays during the summer. Having different options for attending services works well for worshipers who like to go away for the weekends.

Our Savior’s Lutheran has about 40 baptized members. The weekly gatherings for worship are small, but they feel just right for long-time members.

Prayers on the Prairie is a regular feature of the Tri-State Neighbor, taking the places of the Crop Watchers report during the winter season. If you have a suggestion for a rural church to feature here, contact Editor Janelle Atyeo at 605-335-7300 or email jatyeo@tristateneighbor.com.