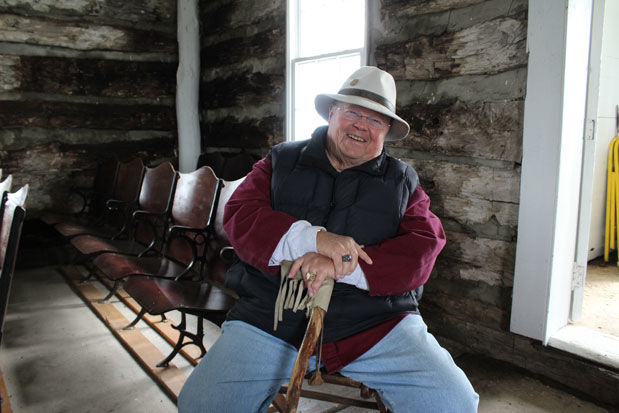 Grant County Historical Society President Arlo Levisen sits in the Brown Earth Indian Church to tell of its history since it was built in 1877 by a Native American community. 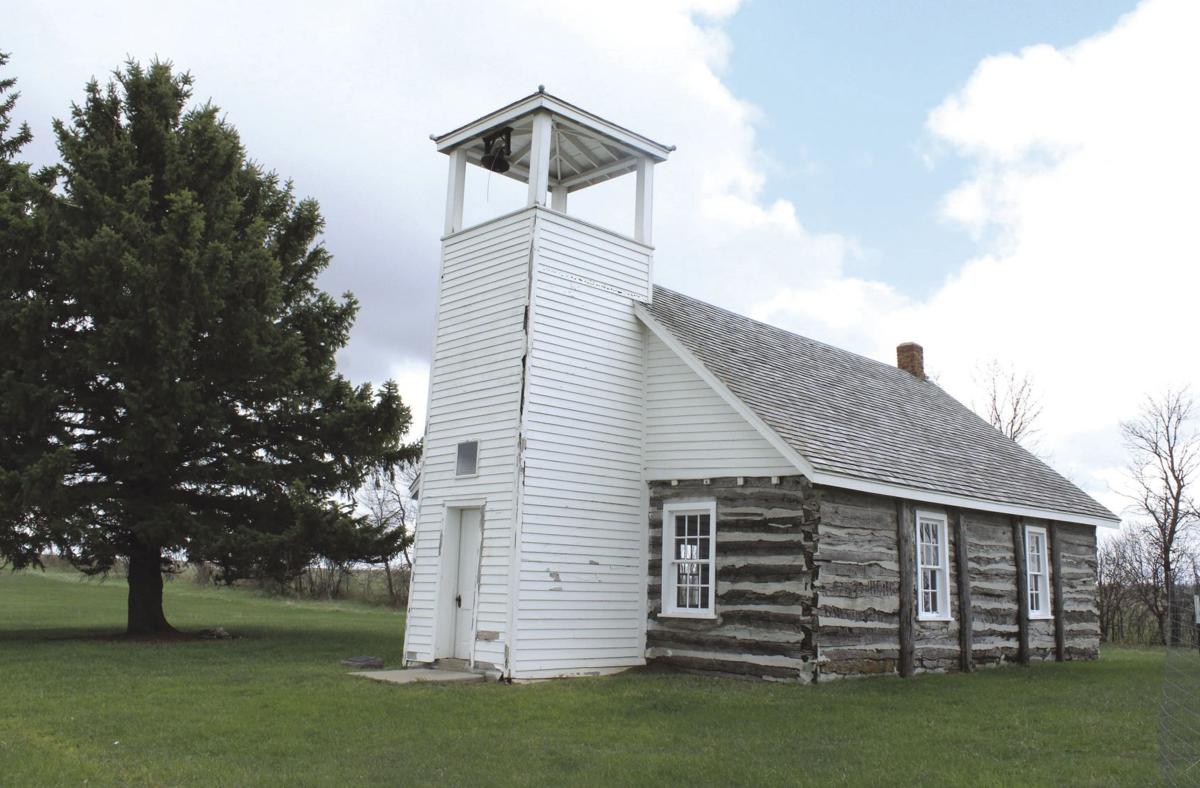 The Brown Earth Indian Church stands southwest of Milbank, S.D., on the homestead of the church’s original pastor. 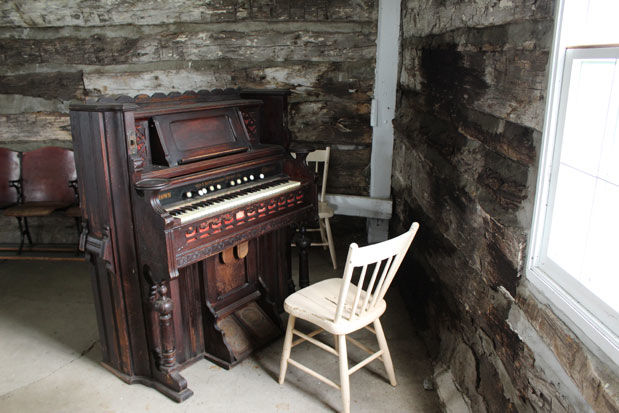 A pump organ was donated by a local piano shop owner. 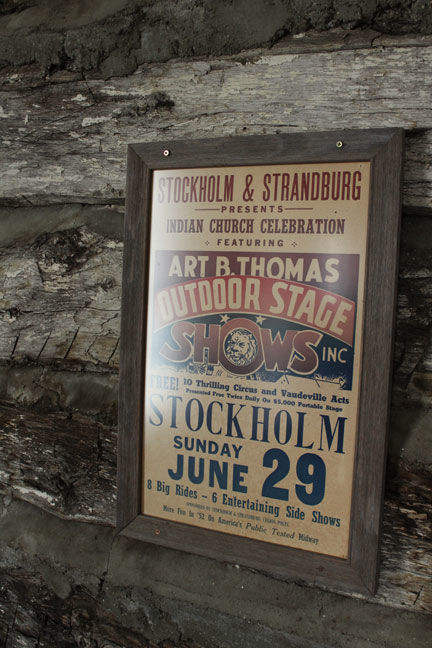 A framed poster in the church advertises a circus on the church grounds. War veterans organized community events at the church into the 1960s. 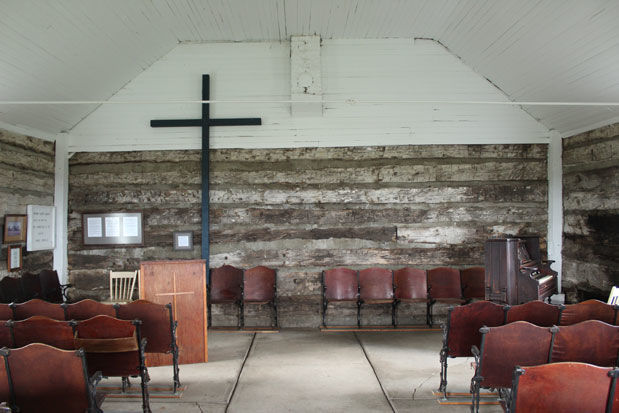 The interior of the Brown Earth Indian Church near Milbank, S.D.

Grant County Historical Society President Arlo Levisen sits in the Brown Earth Indian Church to tell of its history since it was built in 1877 by a Native American community.

A pump organ was donated by a local piano shop owner.

The interior of the Brown Earth Indian Church near Milbank, S.D.

If not for the square, white bell tower, the historic building southwest of Milbank, South Dakota, would look like a settler’s cabin.

Hand-hewn oak logs make up the walls, ax marks still visible where the timber was made to fit. The original caulking has been replaced with concrete, the dirt floor is now cement, and the pane glass windows have been restored. The Brown Earth Indian Church is a monument to a time when two cultures clashed on the northern prairie

The crude structure, built for $500 in 1877, was the first church in Grant County. It was constructed by hand by members of the Brown Earth Colony, one of two Indian colonies in South Dakota created to teach natives agriculture. The group of Sisseton-Wahpeton Indians had given up their tribal affiliation in exchange for rights to homestead. They converted to Christianity, and the church was a mission of the Presbyterian Mission of Philadelphia, which had a mother church in Lac qui Parle, Minnesota.

The church was built on the homestead of its first pastor, Daniel Renville. Born of French and Dakota-decent, he was one of the first ordained Native American pastors. He led a congregation of 44 members at Brown Earth.

The bell tower was built two years after the church was complete. The Philadelphia Mission bought brass bells for 20 of its mission churches, and each were inscribed with the name of the church. The Brown Earth bell traveled from New York to Gary, South Dakota. From Gary, it took a month to reach its final destination by horse and wagon. The original bell went missing over the last century.

Renville and his wife got along well with white settlers. When Jeremiah Milbank decided his town needed a church five years after Brown Earth was built, Renville was asked to give the benediction at the inaugural service held in February 1884. He was also the postmaster for the Brown Earth Post Office, located in his home.

Renville was said to have provided his fastest horses for the last buffalo hunt in Grant County in 1877. Colony members made a living trapping and selling wood. It was a difficult way to survive, and tensions were mounting with the white settlers.

“They got starved out, burned out and bought out,” said Arlo Levisen, president of the Grant County Historical Society, which owns and cares for the church today.

Prompted in part by the Dawes Act of 1887, which divided Native American land into individual allotments, members of the Brown Earth colony began to disperse. Support for Native Americans was being concentrated at the agency level, so some moved to Birch Coulee, Minnesota, and some to the Upper Agency near Granite Falls, Minnesota.

Renville and his congregation abandoned the church by 1892. For about five years, the little log building was used by the Swedish Baptist congregation until its Elim Covenant Church was built in nearby Stockholm, South Dakota.

The Evangelical Free Church of Stockholm, also a Swedish Baptist congregation, owned the building for another four years. Their plans were to tear it down and move it to town, but people in the community didn’t like the idea. A Milbank newspaper editor, Henry Volkmar, and banker O.P. Johnson led a campaign to raise money for the church in 1905.

Kate Amsden, wife of an early state senator, appealed to the community by writing a poem urging that the church be preserved. She wrote of a Dakota service white folks attended at the Indian Church in 1885:

“The organ peeled a low soft air, played by an Indian lad whose hair, Was blacker than a raven’s wing. And then we heard the choir sing. The words we could not understand, but the melody was something grand, If you’ve never heard an Indian sing, you can’t appreciate the thing.”

“This is the church that was saved by a poem,” Levisen said.

Grant County owned the church for more than 100 years. During that time, the Stockholm-Strandburg American Legion Post 171 took care of the building and grounds. The Legion’s World War I veterans took on a major restoration of the church in 1928. They shored up the walls and poured the cement floor. They also acquired the balcony seating from the Evangelical Free Church, which is still in use at Brown Earth today.

“They saved it,” Levisen said.

Along with their efforts to restore the church, young veterans were looking to have fun with their new families. The church became the site for carnivals, picnics, baseball games and the annual American Legion Turkey Shoot in the 1950s and 60s.

The legion did more restoration work in the 1950s, around the time the Peppy Pals 4-H Club from Stockholm planted evergreens around the grounds. Today, they are tall borders of what was once Renville’s homestead and young pine trees are being fostered along in front of the church as part of an Eagle Scout project by Andrew Falk, a grand-nephew of one of the World War I veterans who helped save the church more than 90 years ago.

By 2007, the American Legion no longer had the strength in membership to care for the building, and the little church fell into disrepair once again. The Grant County Historical Society assumed ownership and repaired the roof, painted the tower and replaced the windows. The society aims to preserve the historic structure, which was placed on the National Registry of Historic Places in 1984.

Today, the church houses a functional pump organ given by Steve Misener, the owner of a piano business in Stockholm. A tall wooden cross came from Blue Cloud Abby near Marvin, South Dakota, upon its dissolution, and a hand-made pulpit of unknown origin make up the altar pieces.

“It just graces the place a little bit,” Levisen said of the cross from the closed Catholic abby.

A few local congregations hold special services at the Brown Earth Indian Church each summer. Tribal members used to come for services in the Dakota language, but that tradition has faded. The church has hosted a few weddings for those looking for a rustic setting. Curious visitors looking for a bit of history stop in each season and sign the guest book.

Other than those brief visits, the church remains a quiet reminder of a time when the prairie was changing and both newfound white settlers and long-living Native Americans were looking for a way to survive and looking for God to guide them.

Find Prayers on the Prairie stories