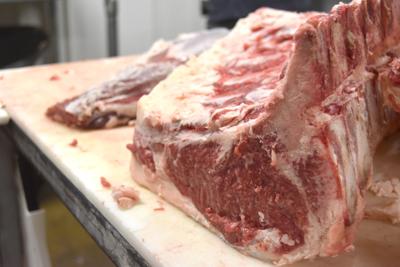 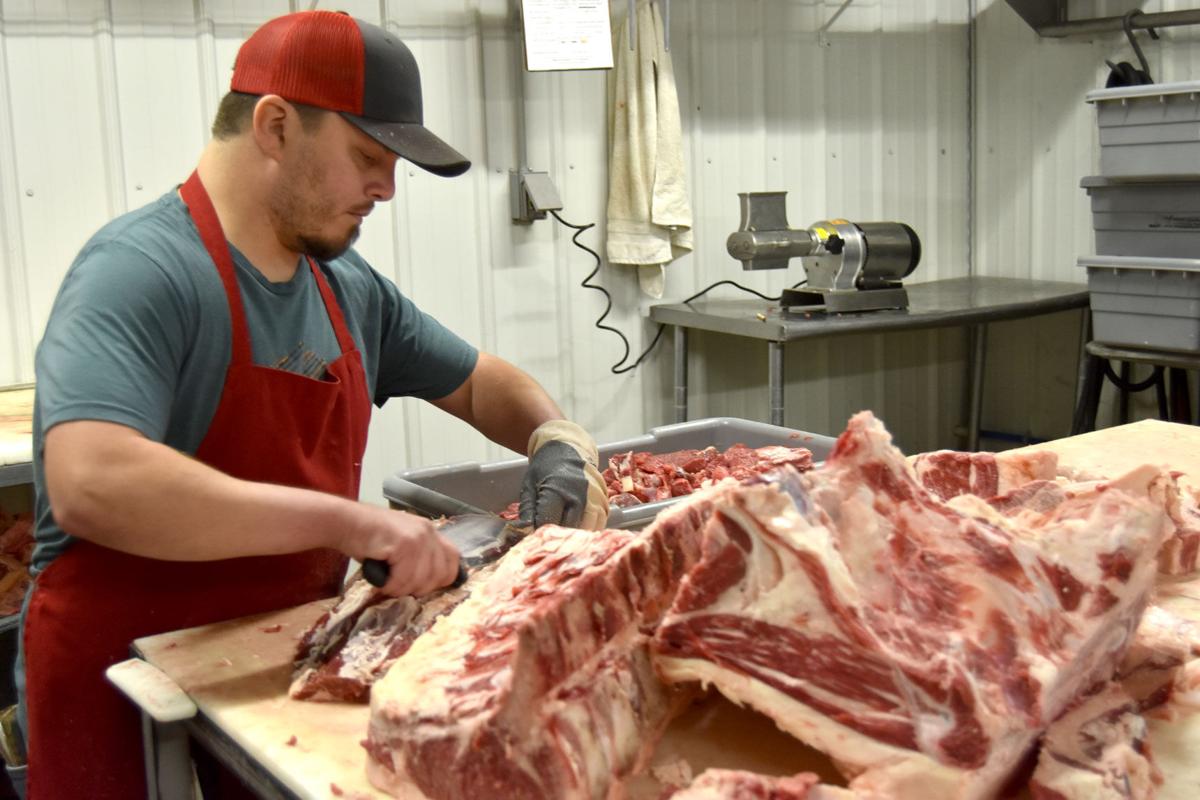 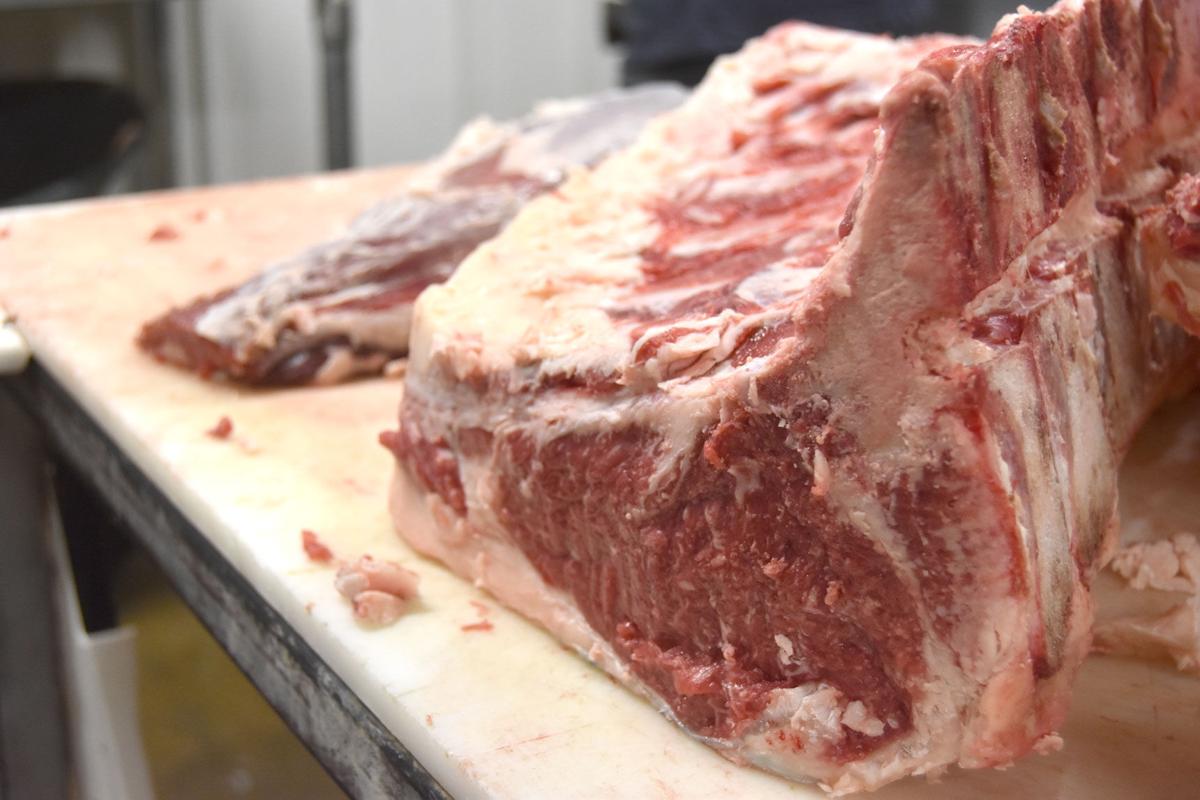 A bone-in rib roll waits to be prepared at Gregory County Locker in Burke, South Dakota.

When it comes to dinner, it’s hard to beat a big, juicy steak.

However, among labor shortages, market transparency issues and COVID-19, it’s becoming increasingly more difficult to get that steak from pasture to plate.

Some producers are on wait-lists over a year long at area butcher shops.

The shortage of workers played a role in her troubles, according to Eitemiller. When she tried to book for next year, she barely got one spot for Nov. 1, she said.

Christina Bakker, a meat science specialist for South Dakota State University Extension, sees the need for more small lockers and believes producers opening their own processing plants may be a way to meet this need.

Opening a business of any kind requires taking many factors into consideration. The extension workshops are designed to introduce potential processors to all of the different factors they need to consider before they would start a small meat processing plant.

The biggest reason producers are showing interest in the program comes down to market prices, according to Bakker.

“Most of these producers really want to control a little bit more of their destiny when it comes to their business. They don’t want to have to take the prices that the livestock markets have right now,” she said.

Producers’ interest in opening their own processing plant is timely.

“There has been a big push toward local meat that’s kind of hitting more urban areas,” Bakker said.

Consumers are getting pickier about where their food comes from. Many want to know who raised the animals and who processed the animals.

“They want meat with a story,” she said

While demand is there, Bakker said the tricky part is for ranchers to be able to connect with consumers in order to bring them locally sourced meat.

That’s why the South Dakota Department of Agriculture and Natural Resources created a $5 million meat processing grant program utilizing some of the state’s residual benefits from the Coronavirus Aid, Relief, and. Economic Security – or CARES – Act. The program was created to give a boost to existing South Dakota meat processors to help expand existing facilities and buy new equipment. A $1.5 million portion of the grant is going toward brand-new businesses and facilities.

Bakker estimates there are roughly 100 small meat processors in South Dakota. The state received 99 applications for the grants, and each of them got a portion of the available funds.

Gregory County Locker in the south central South Dakota town of Burke was one of the grant’s recipients.

The locker is putting the funds to use by building a 50 by 40-foot addition that will include a second freezer and designated storage space.

Owners Lonnie Liewer and Kurt Frank opened Gregory County Locker in 2018 as a way to meet the growing demand for local meat processors.

The two owners initially looked into starting a business to process wild game, but the Burke Business Promotion Corporation encouraged them to start a livestock processing plant instead.

“They said that there’s a need for lockers and they’ve been trying to get someone to do one forever,” Liewer said.

So Liewer and Frank switched gears.

“We even did an alpaca once,” Liewer said.

Coming from a wild game background, there was a bit of a learning curve for processing livestock.

Frank and Liewer credit Wesley Reinford, owner of The Meat Shop in the western South Dakota town of Nisland for helping them find their footing in the business. The business partners say Reinford taught them what to look for while butchering.

“We’d never cut up beef before, except for hamburger. So he came down and went through the cuts,” Frank said.

The hands-on training paid off.

“When we first started, it took us all day to cut one beef up and now we’re doing three, sometimes four a day, depending on how big they are,” Frank said.

As Frank and Liewer perfected their craft, their business grew. When the shop first opened, they said they were booked out about a month, but they now have a six- to seven-month waiting list.

Even though the upfront costs of buying from a local processor can put some people off, Liewer and Frank said the overall price of the meat, along with the quality, is worth the wait.

“It’s a lot of money upfront to buy a critter, but if you’d go buy the same amount at a store it’s gonna be twice, if not three times higher. It’s a heck of a deal,” Frank said.

This fall, Gregory County Locker was paying between $13 and $14 a pound for a rib-eyes steak, which they then mark up slightly to sell.

“I think the grocery store right now is $27 a pound for ribeye,” he said.

“The biggest thing, though, is the taste,” Liewer said.

“I think people got a taste of the farmers’ stuff instead of buying from Costco and Walmart,” he said.

It’s a big reason Liewer and Frank each said they believe the demand for locally grown and processed meat is only going to grow. It’s a better quality product for a smaller price tag.

Frank also pointed out, when meat is purchased from the grocery store, the majority of the cost goes back to the large-scale packing plants.

“When you buy it from a farmer, you’re paying the farmer … and then you pay us to cut it,” which keeps consumers’ money in their local communities, he noted.

Bridging the gap: One restaurateur provides insight to why he needs ranchers - and vice versa

“We’re on the same team.” A restaurant's bottom line hinges on the producers’ bottom line. The two are looking to team up in the Black Hills. 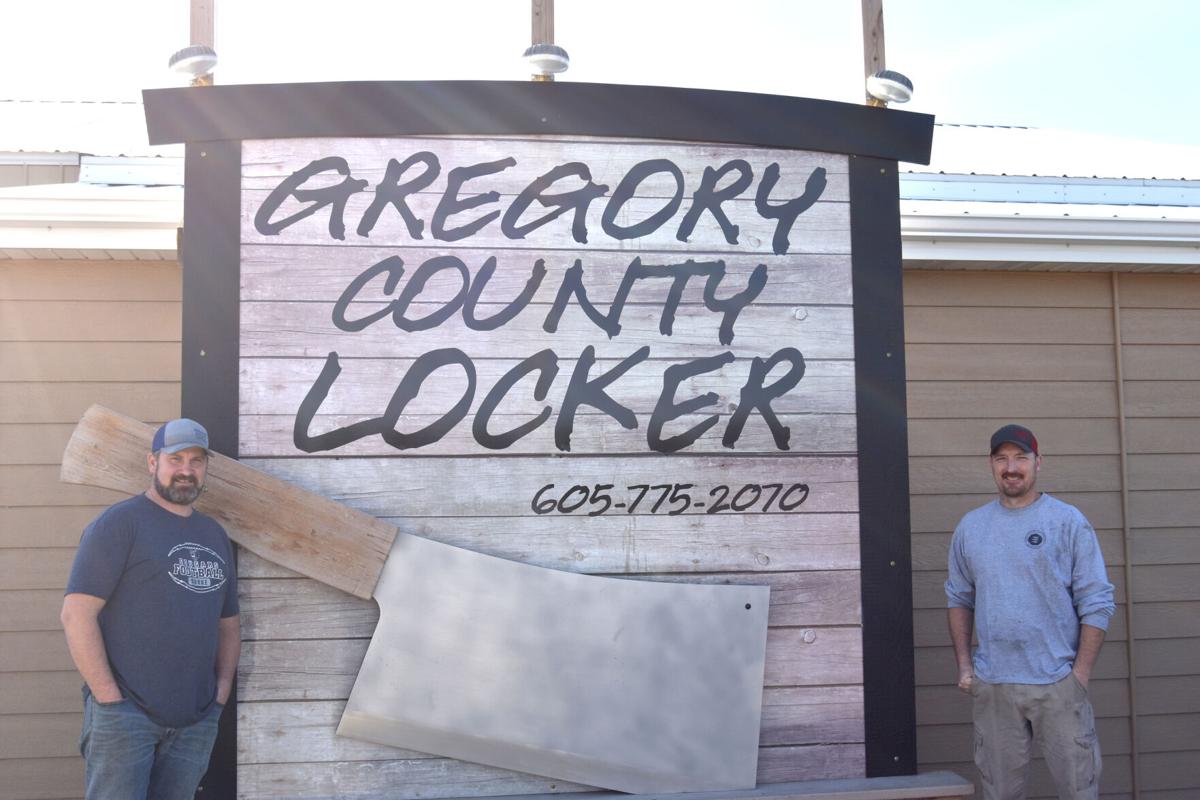 A bone-in rib roll waits to be prepared at Gregory County Locker in Burke, South Dakota. 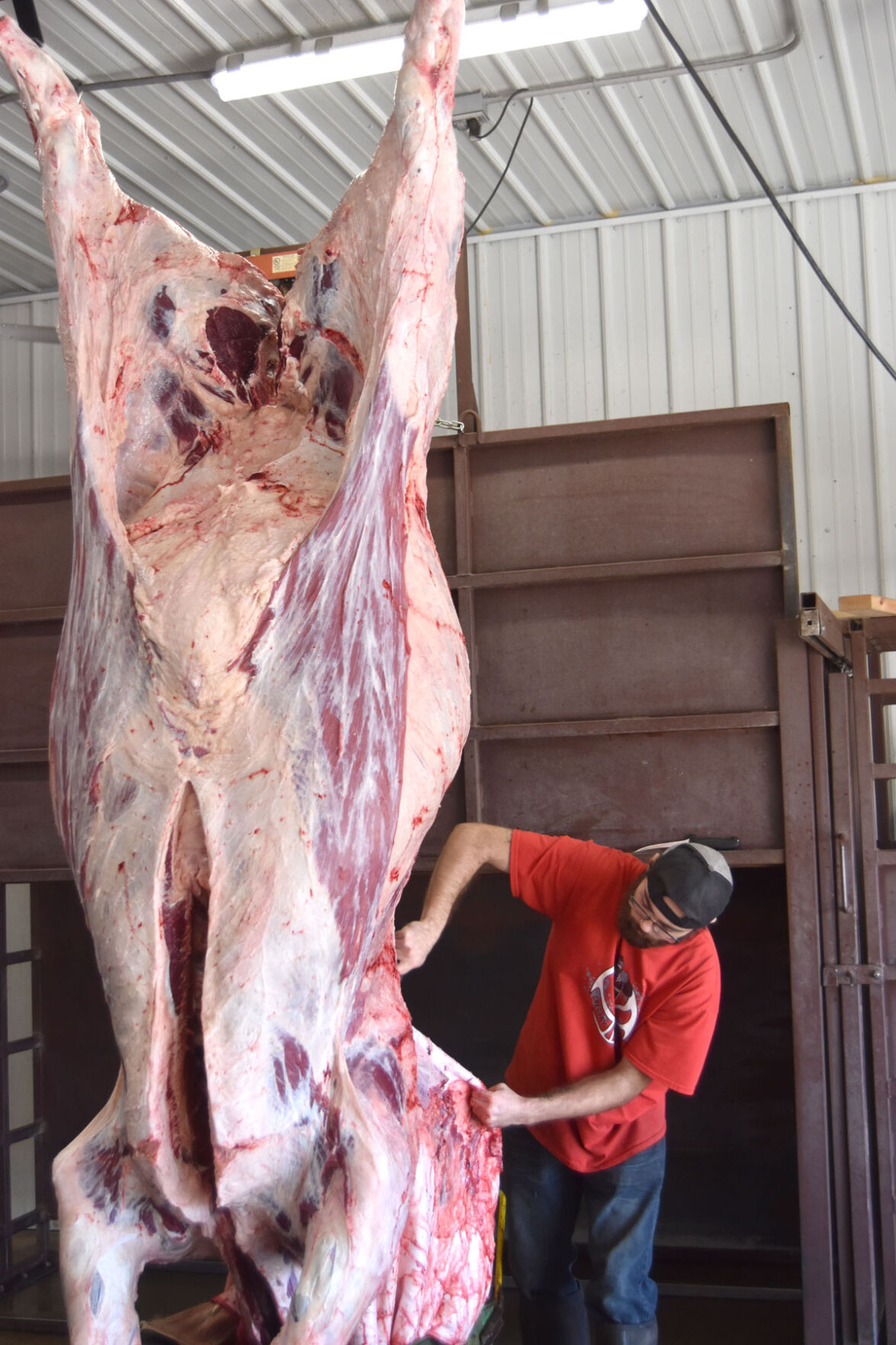 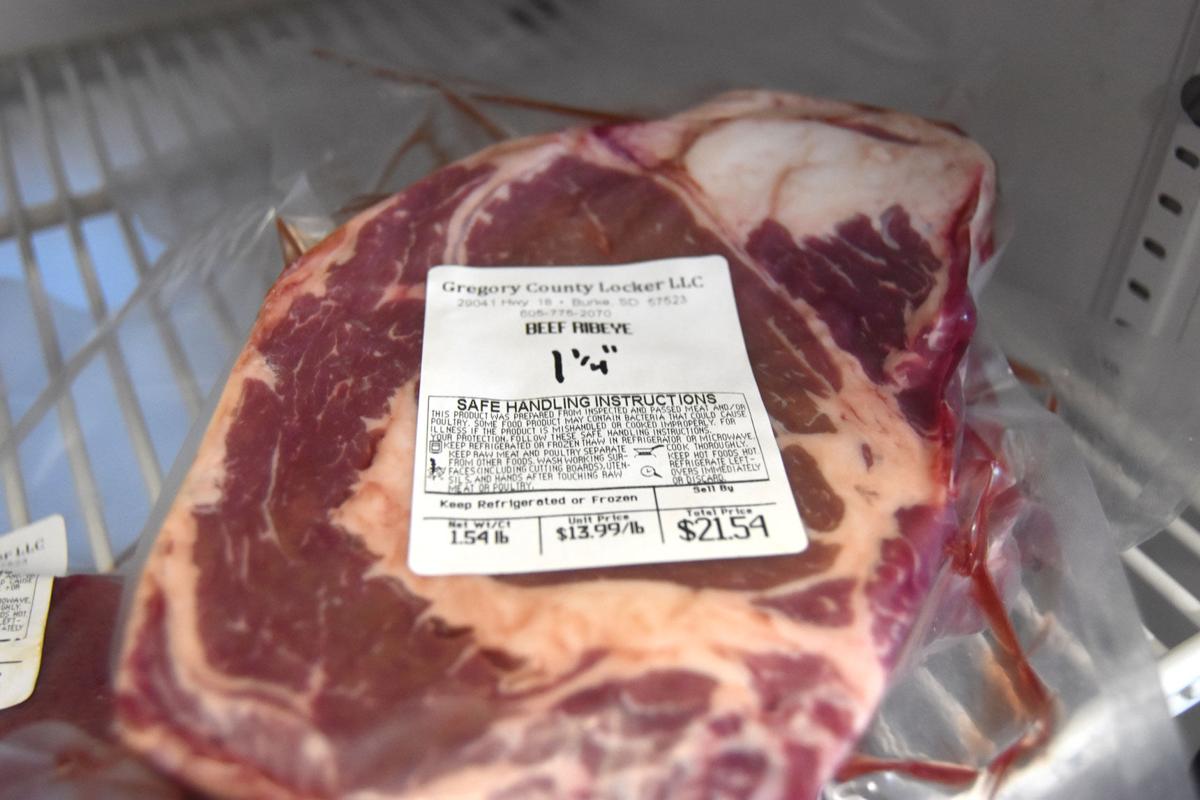 On Nov.9, 2021, Gregory County Locker was selling ribeye steak for a retail price $13.99 per pound. The average price for the same weight and same cut at a grocery store may be closer to $27 per pound, Kurt Frank said.