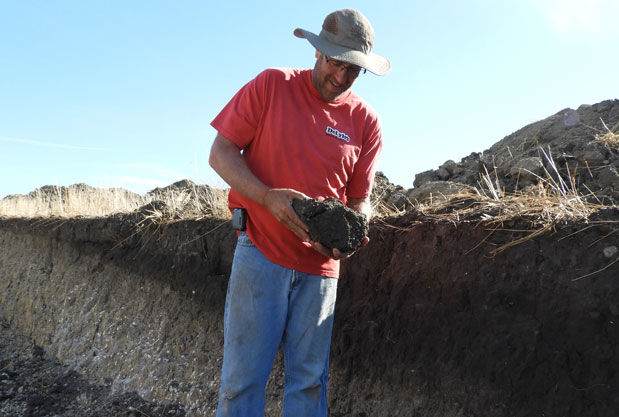 Farmer David Kruger examines some of the topsoil that has eroded from the top of his hill near Twin Brooks in northeastern South Dakota. 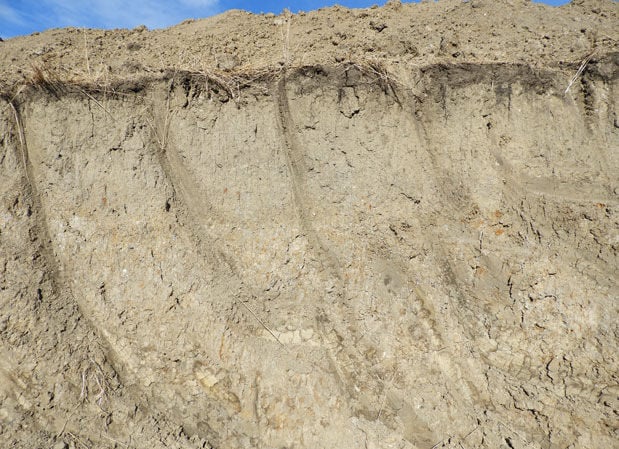 Only 3-4 inches of topsoil remain at the top of this hill on David Kruger’s farm in Twin Brooks, S.D. 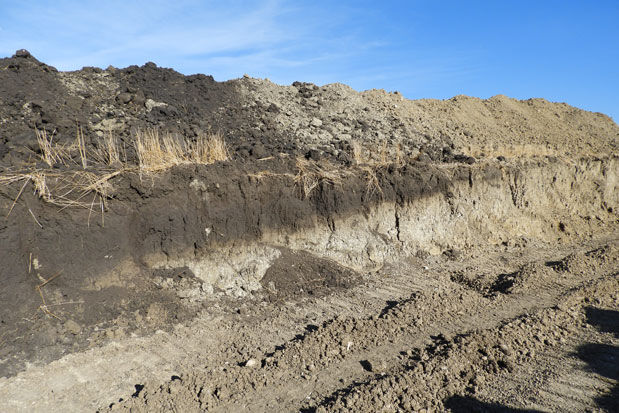 The side of a trench excavated through Twin Brooks farmer David Kruger’s hill reveals the effects of soil erosion. Over decades of conventional tillage, the dark topsoil eroded from the top of the slope on the right and accumulated at the bottom of the slope on the left.

“I remember him going to the ditch along Highway 12 and hauling the dirt out of the ditch and back onto the field with a loader,” Kruger said.

Instead, he was thinking about moisture and long days of picking rocks.

“It kind of caught my attention because we were always on the dry side, always short of moisture and always picking rock,” Kruger said. “I thought, if we could keep the moisture in the ground and the rocks in the ground, it might be worth a try.”

So Kruger began no-till farming with a small portion of his ground in 1993, and he slowly added more acres to that program over the next five years.

At first, Kruger’s grandfather wasn’t too impressed with Kruger’s no-till efforts, but a few years later while visiting a corn field, the elder farmer told his grandson, “If you can keep doing this, getting this kind of yield while keeping the dirt from blowing, you might be on to something.”

Recently, Kruger got a stark visual reminder of the erosion his grandfather was talking about. When a neighboring field that Kruger rents was tiled, he excavated a trench through his own land to run a pipe downhill to remove the water.

It was a surprising discovery because the field had been farmed using no-till practices since 1997. Since 2004, it has had a three-crop rotation of corn, soybeans and wheat, and it was planted with a cover crop every third year after wheat since 2010. These are all good soil health management practices.

So why had there been so much erosion?

What Kruger saw was part of the legacy of conventional farming over the course of the last century.

For decades prior to 1997, the field had been farmed conventionally, meaning the ground was tilled multiple times each season.

Soil scientists now understand that tillage has a negative effect on soil function, including reducing organic matter and destroying the kind of structure that allows water to infiltrate the soil and remain available to plants. However, it has long been known that tillage also greatly increases the rate of soil erosion.

“The process of tillage erosion is that every time you lift the soil, some of it slumps downhill,” said Sharon Schneider, U.S. Department of Agriculture Agricultural Research Service supervisory soil scientist in Brookings, South Dakota.

For much of the last century, some level of tillage erosion was unavoidable. Schneider explained that farmers were feeding the country with the best technology and management practices available to them, but there were consequences to our nation’s farmland.

The erosion on Kruger’s hill is not singular.

“This would be extremely common,” Schneider said. “We can see it clearly in this excavated trench, but the effects of erosion are present even where you can’t see it as clearly. We’re dealing with landscapes that have been farmed for more than a hundred years. This is what happens.”

Craig Veldkamp, USDA Natural Resources Conservation Service soil scientist in Brookings, said that Kruger’s no-till practices have likely kept the erosion on his hill from becoming much worse. In fact, he has seen more extreme cases of erosion where lighter soils are seen on the top of hills.

“The soil is this light color at the top of the hill,” Schneider explained, “because the high organic material has been removed, and subsoil material is incorporated into the tilled layer. In extreme cases you’re farming the subsoil.”

With the topsoil gone and the subsoil exposed, farmers will see significant yield losses in those eroded areas.

After seeing the erosion in the trench on his land, Kruger didn’t recall any major differences in his crops between the top of the hill and the bottom. However, in the last few years, he had begun using yield maps, so he looked back at the yields for his soybeans last year.

The map showed the hill winding along for half a mile with yields on the ridge 12 to 15 bushels per acre lower than the yields on both sides of the ridge where the topsoil is still in place.

If not for Kruger’s good soil conservation practices, the differences would likely have been worse.

“From ‘97 on, it’s been farmed in a manner that’s definitely helped,” he said. “We could have easily lost another 3-4 inches of topsoil off that ridge.”

That’s a point Schneider stresses about the erosion caused by decades of conventional tillage.

“It’s too late to prevent this from happening,” she said, “but it’s not too late to respond to it.”

Good soil conservation practices can drastically reduce the rate of erosion and can help build the resiliency and fertility of soil. Producers who would like help designing a soil health plan for their operations should contact their local NRCS office or the South Dakota Soil Health Coalition.

“Don’t wait to see light colored soil or subsoil on top of your hills before you start some erosion control,” Veldkamp said. “Just stick a probe in the ground and see where you are.”