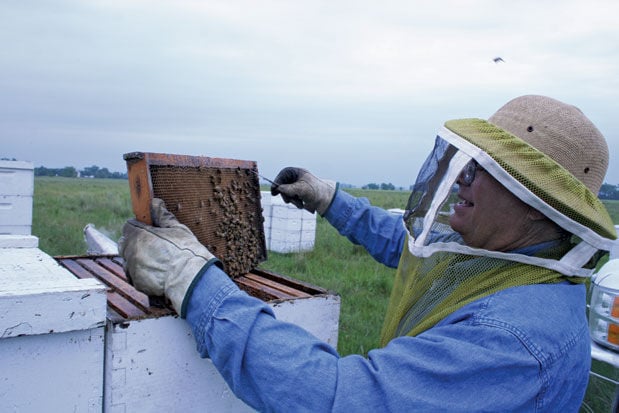 Beekeeper Bret Adee checks a colony north of Bruce, S.D. Adee runs the pollinating side of Adee Honey Farms, managing colonies in the Midwest during the summer and in California during fall and spring months. After seeing steep declines in the bee population over the last decade, he encourages those in agriculture to consider pollinators when managing crops. 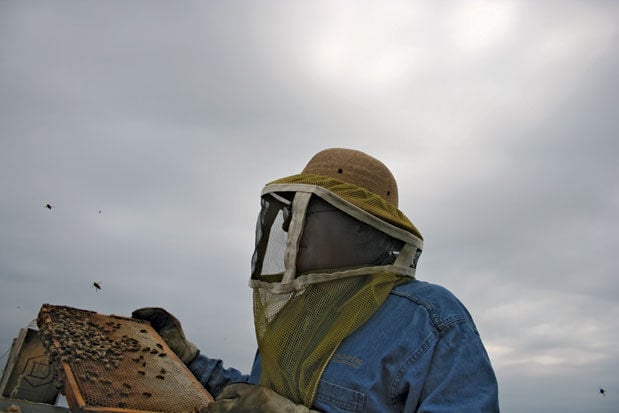 Bret Adee pulls a frame from a bee hive to check a colony near Bruce, S.D. 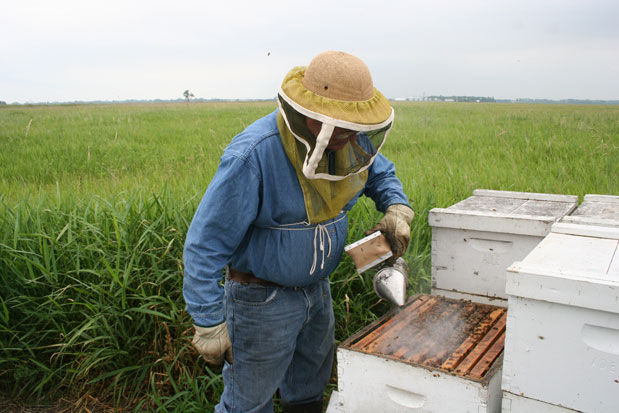 Bret Adee uses a smoker to clear bees from a hive. The tools of beekeeping haven’t changed much from those used a century ago. 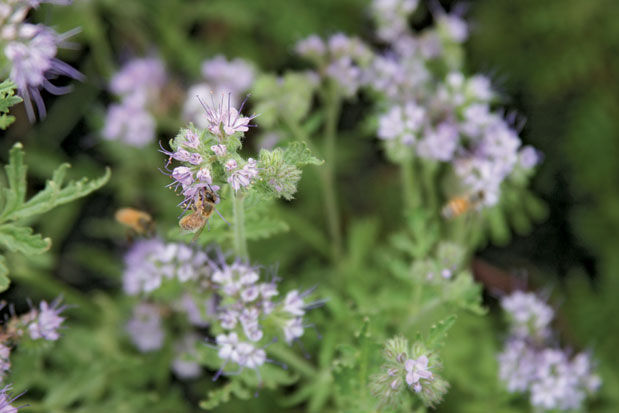 A bee drinks nectar from a phacelia plant. USDA researchers have been studying phacelia and other oilseed crops that double as bee forage in South Dakota. 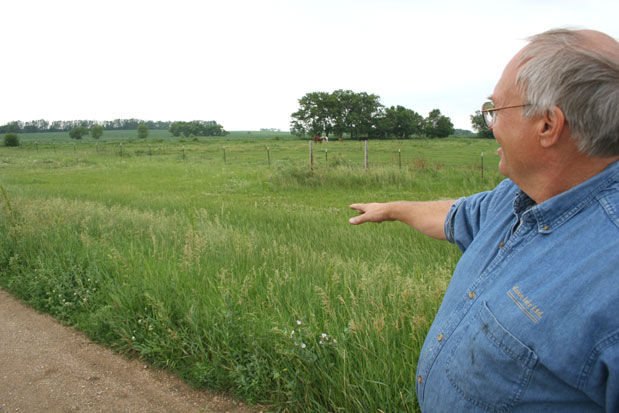 Beekeeper Bret Adee shows where a ditch has been sprayed. Keeping flowering plants in road side ditches provides forage for bees.

Sweet clover honey is pretty nice, but the benefits that farmers receive from bees is even sweeter, according to one South Dakota beekeeper who happens to have the largest bee business in the world.

Soybean growers might want to listen up when beekeeper Bret Adee talks: “I think there’s nothing better to do to improve yields for no cost at all,” he said.

Adee is in charge of the pollination side of Bruce, S.D.-based Adee Honey.

“People think, ‘Oh, bees – they make your honey.’ They also make your crop,” he said.

As part of Adee’s role on the National Honey Advisory Board, he reviews studies coming out of universities and company research across the nation. He keeps a large file of papers and clippings that show the benefits of bees.

One paper out of Brazil dating back 10 years shows that bees increase yields for soybeans, even though the crop doesn’t need bees to pollinate. Seed numbers were 50 percent higher where bees pollinated the soybeans, the Brazilian study found, but the seeds weren’t as heavy. Similar studies in Canada and Australia have found that bees can boost yields. In North Dakota and Nebraska trials, bees increased seed production for sunflowers, and there’s less of a threat from head moss.

Bret Adee is the third generation of his family to work in the honey business. His dad, Richard, at 79, still provides some support at the office in Bruce.

It was Richard’s father and uncles who first ventured into beekeeping. They were schoolteachers in Kansas during the Great Depression, and they sold Watkins products at farm sales.

Those sales helped finance their startup bee business. They bought six colonies of bees. Before long, they were adding honey to their lineup of products.

Family reunions became like a trade show, with the brothers exchanging information on the best ways to keep bees. Hearing it all from his elders, Richard Adee wanted to join the business, too.

“I was just so intrigued,” he said from behind his desk in an office filled with awards, memorabilia and presidential photographs.

He heard that South Dakota with its abundant sweet clover was a good place to raise bees. Adee  answered an advertisement in a newspaper and bought out another beekeeper. Now his two sons and his daughter are in business with him, along with 80 employees.

Making honey is a big part of the bee business, but for the Adees, more than half of their income is from pollinating crops. Bret Adee runs the pollination side of the business, splitting his time between the eastern half of South Dakota and Southern California.

During the winter months, the Adee bees move west to pollinate almonds in California and apples in Washington’s Yakima Valley.

Without bees, there are no apples. But pollination there might last as little as three days. Apple growers want the bees in and out in a short amount of time. They want bees to pollinate only select blossoms so they grow bigger apples. Adee sends 10 semi loads of his bees to Yakima, Wash.

It takes 1.5 million bee colonies to pollinate California’s almond crop, so there's plenty of business. The Adees send 150 semi loads of bees to the West Coast in a month’s time each fall.

“It’s just a regular caravan of bees going to California in the late fall,” Adee said. “Those almonds depend on us.”

The honey is sold in bulk in 55-gallon drums. The wax is formed into 40-pound bricks. Some is sold to a candle maker in Ipswich, S.D. Most of it goes to a company in Montana that sells it around the world for making cosmetics.

In recent years, South Dakota has had 270,000 producing bee colonies. Behind North Dakota, the state is the second biggest honey producer in the nation, making 17 million pounds of honey in 2012, according to the latest statistics from the U.S. Department of Agriculture (USDA).

Beekeepers lost an unprecedented number of colonies in 2006 because of a mysterious problem that has been termed colony collapse disorder.

It’s typical for beekeepers to deal with some percentage of loss. In the past year – from April 2014 to April 2015 – beekeepers across the nation lost 42 percent of their hives, up from 34 percent the year before, according to a USDA survey. For the first time, the summer loss was greater than the winter loss.

Those numbers would be higher if it accounted for the number of queens that beekeepers have been replacing to keep colonies alive, Adee said.

Numbers such as that would have sent him into a tailspin years ago. Before recent declines, his losses used to be about 3 percent a year.

After a scare with the varroa mite in the late 1980s, the Adees were able to keep their colonies stable for the better part of 15 years.

“Then all of a sudden, the bees started falling apart,” Adee said. That was about 2005. Now after a full decade, Adee said they’re kind of starved for food without a variety of plants around from which to feed.

For bees, it’s like living on white bread alone instead of maintaining a balanced diet, he explains. Their immune systems are compromised, so they’re not able to fight off diseases or put up with pesticides as easily.

Adee said his colonies each used to produce 120 pounds of honey a year. Now it’s closer to 60 pounds.

Pesticides that farmers use to rid fields of bugs are blamed often for bee losses, but it’s only one of several issues affecting bees.

“The general public thinks if we eliminated pesticide use, the problem would go away,” said Amanda Bachmann, an urban entomology specialist for South Dakota State University Extension.

But habitat loss is a another big problem, she said, as are diseases and parasites affecting health in the hive.

There’s not as much forage for bees as there used to be. Clover and alfalfa don’t grow widely like they used to around the prairie. They’ve been wiped out in ditches where farmers spray to keep weeds from creeping into fields.

Bachmann has been working with others who are hoping to plant native grasses in roadside ditches.

Even companies that manufacture pesticides, such as Bayer CropScience, have launched campaigns to improve bee habitat. Bayer’s Feed a Bee campaign gave out free seed packets for people who pledged to plant flowers in their communities.

Others are looking into the potential benefits of flowering crops that grow well in South Dakota and provide great forage for bees. Jonathan Lundgren, a research entomologist with the USDA’s Agricultural Research Service, planted different oilseed crops in the Brookings area.

Some, such as sunflower, canola, flax and safflower, are commonly known, but Lundgren is looking into other species that many farmers haven’t heard of before. There’s borage, phacelia, calendula, cuphea and echium, for example. They could be used for fuel, edible oil or cosmetics. Canola flowers in the spring, borage in the summer and cuphia flowers in the fall, providing forage for bees all season long.

“In addition to growing a cash crop, we can feed the bees while we’re doing it,” Lundgren said.

Farmers are catching on and becoming more aware of using pesticides sparingly, as Adee sees it.

“I think we’ve been through the darkest of days,” he said.

Part of Bachmann’s focus is educating pesticide applicators. Much of that effort is about timing applications to avoid times when bees are out foraging. If a crop is flowering, it’s a not a good time to spray, she said. It’s best to wait until late in the day when it’s getting dark and bees are not as active.

Bachmann also encourages people to check the state’s sensitive-site registry that pinpoints places were bee colonies are kept so pesticide applicators know to use caution when spraying there. A map is available through the South Dakota Department of Agriculture’s website.

One class of pesticide has been under close watch – neonicotinoids, a seed treatment used on most corn and soybean varieties. It affects the nervous system of insects, and it’s suspected to have negative effects on bees.

The pesticide, like Roundup-ready crops, came on the market in the mid-1990s. Honey yields gradually have declined since then.

The Environmental Protection Agency (EPA) is proposing new restrictions on pesticide use as part of the president’s strategy to protect the health of honeybees and other pollinators. The plan, which was released in May, also includes enhancing 7 million acres for pollinators during the next five years, restoring monarch butterfly populations to 225 million by 2020 and reducing the overwinter loss of honeybees by 15 percent in 10 years. The average lately has been a loss of about 30 percent over the winter.

The EPA is studying the effectiveness of neonicotinoid seed treatments in boosting yields, and any new such pesticides must go through a bee safety study.

Meanwhile, beekeepers are doing all that they can to make their bees more vigorous. Adee, for example, is keeping his company’s breeder bees in the mountains of Utah in an attempt to make them hardier. And he will continue to keep as much food for bees around as he can, even in his own back yard.