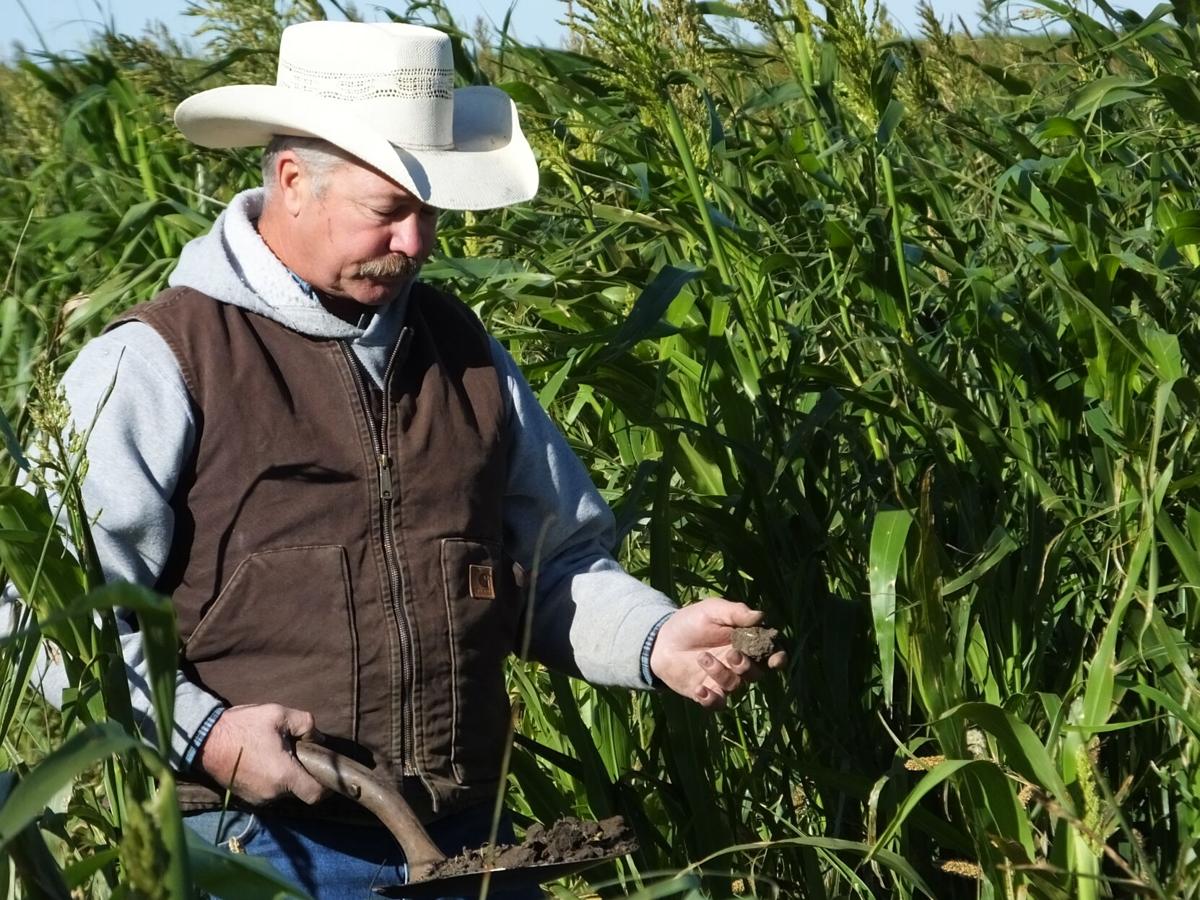 Doug Sieck examines soil from his crop field during a 2015 field day at his farm near Selby, S.D. Sieck said deep rooted cover crops have helped build carbon in his soil, making it capable of handling water in wet years. 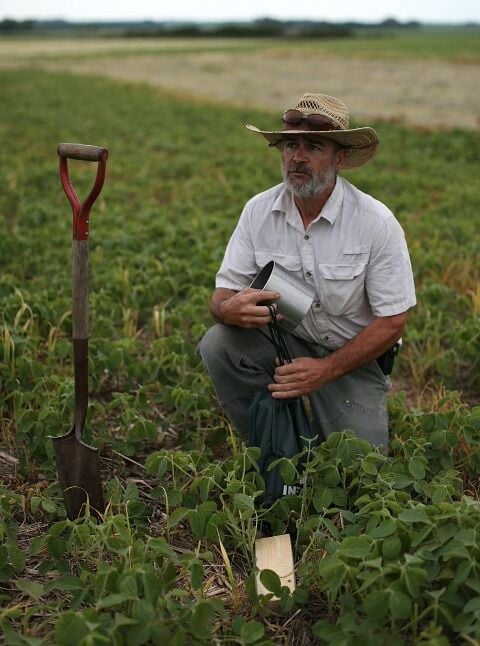 Natural Resources Conservation Service District Conservationist Jim Finnegan performs an infiltration test in a field in 2018. He worked with several producers last year to care for prevent plant acres, and they found that field conditions where cover crops had grown were much better than fallow fields when it came time to plant this spring.

Levi Goetz was leery rolling into the field to plant corn after a 2-inch rain, but it was already mid-May. Time was starting to run out.

It turned out he had nothing to worry about. He had to steer around a few potholes of standing water, but he could roll his quad-track rig and 24-row planter through much of the field without getting stuck in the mud or leaving tread marks that would make it hard for crops to grow. He put in 80 acres of corn that evening.

“Everything worked out how it was supposed to,” he said, reflecting on the spring of 2019 when wet conditions throughout much of the Midwest left farmers unable to plant millions of acres.

South Dakota had more acres claimed under the prevented planting provisions of crop insurance than any other state. Now a year later, farmers are finding that where they took care to tend to those prevent plant acres, they are having an easier time getting their 2020 crops off to a good start.

Goetz farms with family near Selby in north central South Dakota, where fields are once again wetter than normal. He also does custom work for other farmers, and he was planting corn for neighbor Doug Sieck when he saw the benefits soil health practices can have in wet conditions.

Sieck remembers the day well. He was skeptical when Goetz called about planting, but he didn't want to send him away and risk dropping to the end of his “to do” list. He warily told him to go ahead.

“It really surprised the heck out of me,” he said.

The field had several years to build up its water storage capacity before 2019's historically wet spring. Sieck has practiced no till for about 20 years. This field had been in wheat three years before, then it was planted to rye. He planted a soybean crop into knee-high rye in 2018 before terminating the cover crop. After soybeans, he seeded it to a full season cover crop. It all added up to healthy soil that could handle excess moisture that spring and be ready for corn planting.

“It had the extra boost from the rye crop. It had a living root all winter long,” Sieck said. “We topped that off with the diversity from the full-season cover crop.”

The lasting benefits of the cover crops continued into this spring when Sieck still had some corn to harvest. In late April, the soil structure held his combine up without leaving tire tracks as he cut through all but the wettest spots where the tallest snowbanks had been.

Planting corn in May, conditions were wetter than ideal, but trenches closed up fine and Sieck was expecting to see good emergence. “All in all, my fields are in pretty good shape this year,” he said. While conditions were partly dependent on the field's location and altitude, cover crops and good soil health practices play a role.

“It sure doesn't hurt to have that structure,” Sieck said.

As District Conservationist with the Natural Resources Conservation Service, Jim Finnegan, helped several producers in Kingsbury County plant cover crops for the first time on their 2019 prevent plant acres. With cover crop seed in high demand, he got a chance to test a cover that isn't the usual go-to warm season grass in South Dakota. Several farmers he worked with planted teff grass.

The Ethiopian wheat, which grows quickly in warm weather, can be cut in just 35 to 40 days. While many producers in the wettest areas of Kingsbury County couldn't get into the fields to seed cover crops until July, they were still able to hay their teff grass by the federally set date, which was moved up to Sept. 1 in 2019.

“The idea was to get a little forage crop going and hold the soil in place, too,” said VanderWal, who farms with family and feeds cattle near Volga while serving as vice president of the American Farm Bureau Federation and president of the South Dakota Farm Bureau.

A year later, those teff grass fields were some of the first fields the VanderWals planted. VanderWal plans to grow teff grass again. It yields well, he said, and gives them multiple cuttings of hay for their feedlot.

Last year, teff grass was a lifesaver for those like VanderWal who needed to put up forage for cattle, but they also saw the soil health benefits. Planting on the first day of May this spring, they noticed that teff grass fields were much better than fields with no cover crop.

Fields that sat fallow through the 2019 growing season came into the 2020 crop year still wet. There were very few planters moving in those wettest areas of Kingsbury County by late April. Those growing cover crops and practicing no till were far better off than the conventional or minimal till operations, Finnegan said.

“Anytime you can get a crop rotation that's dominated by high residue crops, you're going to build carbon in the soil,” Finnegan said. “If you get no till and cover crops going, you're going to have infiltration instead of runoff.”

In his work, he's seen wet areas in some fields reduce in size.

Yields benefit from cover crops, too. A growing cover feeds soil microbes, and it's that biology in the soil that helps crops get their nutrients, he explained. The no till, cover cropping farmers he works with tell him that their 2019 yields were better than their neighbor's. He expects more of the same good news this fall.

But cover cropping can be much more challenging in a crop rotation of just corn and soybeans, according to Finnegan. Covers like rye need time to grow in the fall before frost hits. A crop rotation that includes a small grain, alfalfa or a shorter season soybean can give enough time for planting rye in the fall, Finnegan said.

When it comes to which crops to plant as covers, he said it's not necessary to plant big, leafy turnips and radishes. Even a spindly plant can help the soil.

“You don't have to have the storybook picture of cover crops to get the benefit,” Finnegan said.

Up in Selby, Sieck has found that having a deep-rooted perennial in his rotation is a major benefit. It helps build organic matter deep down in the soil, which creates structure that can handle water in wet years and store it in dry ones. He encourages other farmers to give soil health some thought.

“You've got to go into that with some faith that these guys that are telling you you're going to benefit from it are right,” Sieck said.