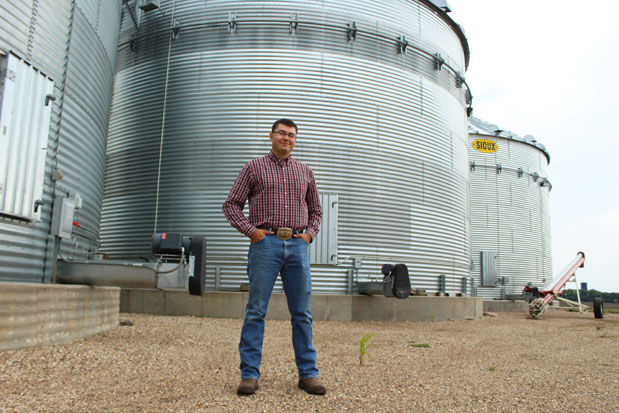 Andrew Streff stands by the grain bins on his Salem, S.D., farm. After years of effort in FFA and working on and off the farm, Streff has been nominated for an American Star Award, the highest achievement award given by the National FFA Organization. 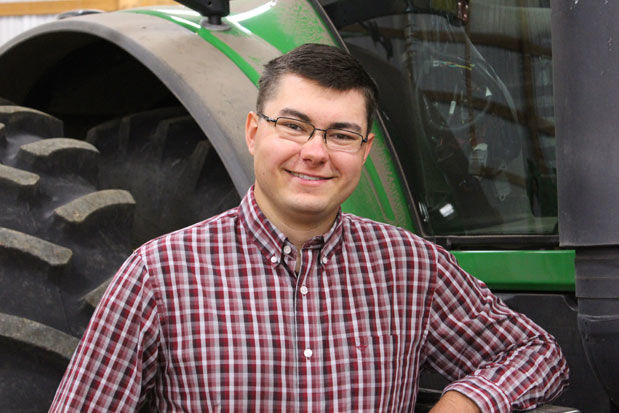 Andrew Streff has been farming with his dad in Salem, South Dakota since he was old enough to drive a tractor, and he knows the job requires a good amount of work.

That’s the same ethic Andrew applied to his FFA career at McCook Central High School, and it’s paid off with a nomination for the organization’s highest award. Andrew, 21, is one of four students across the country nominated for the national American FFA Star Award in ag placement.

National FFA made the announcement July 31. Nominees will go before a panel of judges to tell them about their supervised agricultural experience (SAE) at the national convention in Indianapolis this fall.

Andrew said winning the Star Award would fulfill a dream to which he dedicated a lot of effort and hard work.

“It’s like farming – you have to work many years to get what you want,” he said from the comforts of his parents’ living room on their farm north of town.

It was a morning with some rare downtime before the youngest Streff son starts his senior year at South Dakota State University. He’s majoring in ag business. After summer internships with ag companies close to home and further away in Ohio, Andrew is looking forward to becoming the fifth generation to work the family’s 103-year-old farm full time.

Andrew is the son of Eugene and Julie Streff. He has two older brothers who help on the farm during busy season, but they have careers off the farm.

Andrew has plenty of family support as he pursues his ag career, and behind him from the beginning of his FFA days was McCook Central advisor Terry Rieckman.

His teacher pushed him from the start to take on different competitions and travel opportunities. Andrew earned three state star awards, a national proficiency award and he serve as a state FFA officer.

He was a freshman in high school when he set the goal of earning a National Star Award. After all the hard work, it would be gratifying to see him win, Rieckman said.

“It’s meant so much to him,” he said. “For him to reach out and grab it is exciting.”

Not only is Andrew deserving based on his experience in FFA, internships and on the farm, he’s a really good kid, Rieckman added. He’s polite, courteous and respectful, he said, and he thinks of others.

The Star Award in ag placement is for those with experience working in the ag industry. Andrew will tell the judges in Indianapolis about crop scouting for the local Central Farmers Cooperative and his time last summer working for Winfield United in Ohio. There, he ran trials and worked with their technology platform to help farmers predict yields and make management decisions in the field. It won’t be hard to convey his passion for raising crops.

“I appreciate the hard work behind it,” he said. “I couldn’t see myself doing anything but crop farming.”

It’s something he and his dad can bond over. Andrew has been helping by his dad’s side since he was little. Now he can do anything his dad can do, and his experience working in the ag industry has helped him grow.

“It brings maturity, knowing how to work with others than just Mom and Dad,” his dad, Eugene, said.

The older Streff grew up a half mile south of his current home and started his own farm in 1980. He first raised cattle and hogs, but now focuses on crops.

It’s been a stressful year for crop farmers, especially in southeastern South Dakota where the Streffs farm. So many of their fields went unplanted that they’re expecting harvest work to take just three days this fall.

“Everything has been so off and topsy-turvy. We’re having to constantly reevaluate,” Andrew said.

This year brought tough management decisions and talks with insurance agents. Eugene made sure to include his son in those conversations.

It’s all part of farming, and it’s all a learning experience – something that will help Andrew in his future farming, and maybe on the stage in Indianapolis.

He’s a believer that hard work can pay off.

“If you put in hard work you can set a very lofty dream, and it’s not going to happen overnight, but keep working and you’ll eventually get there,” Andrew said.

Andrew Streff, who hails from the McCook Central FFA Chapter in Salem, South Dakota, was named the 2019 Star in Agricultural Placement at the National FFA convention in Indianapolis this weekend.