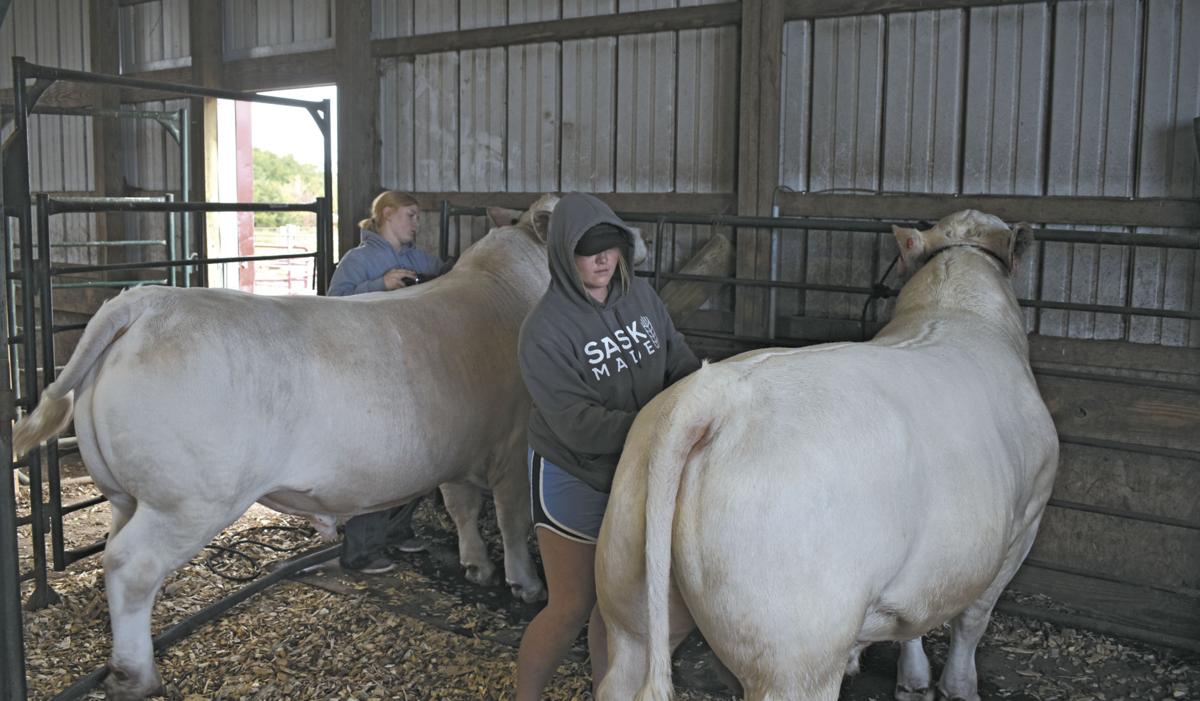 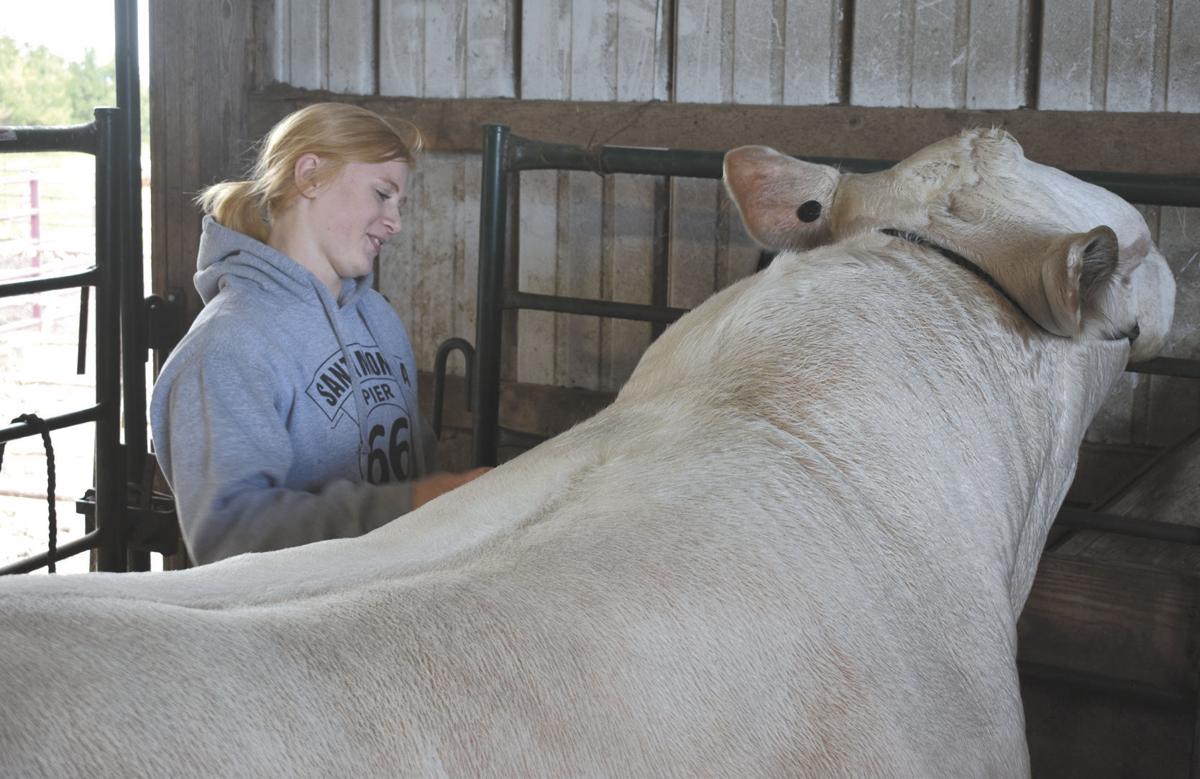 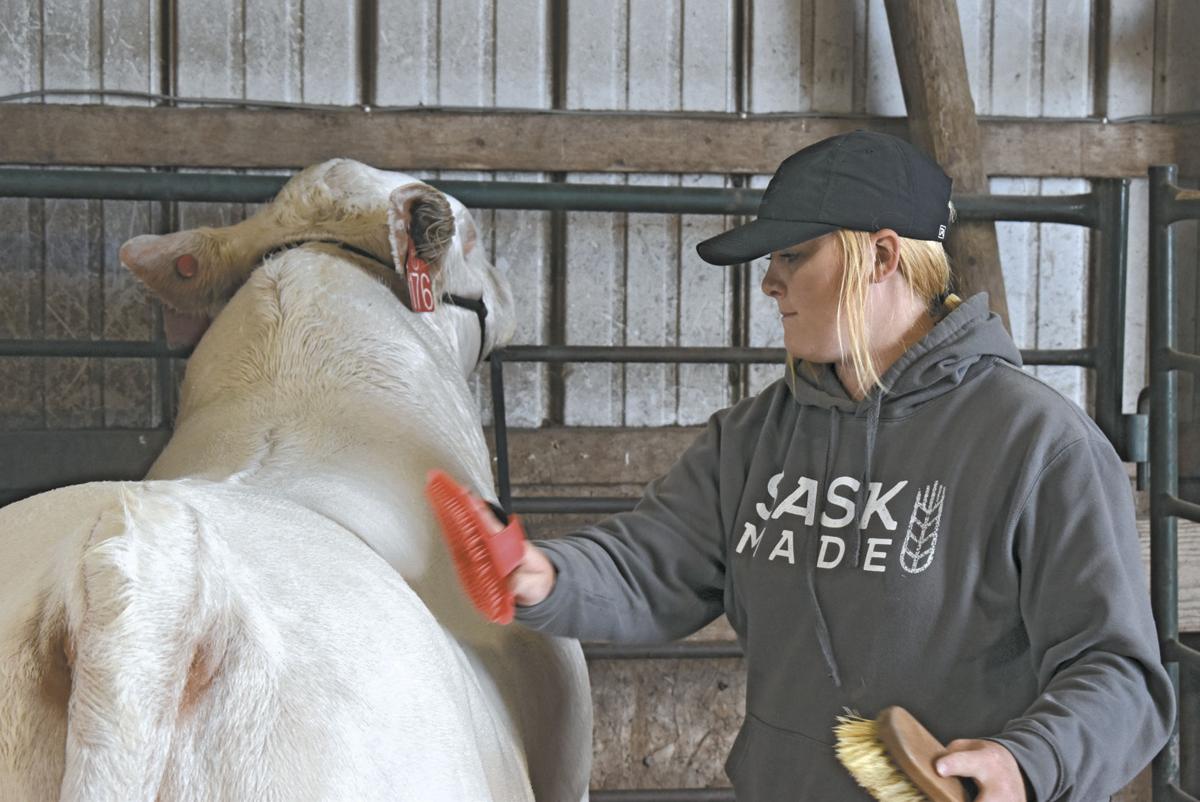 Cagney Effling, 21, will be showing in her final National Junior Charolais show this month in Brookings, S.D. 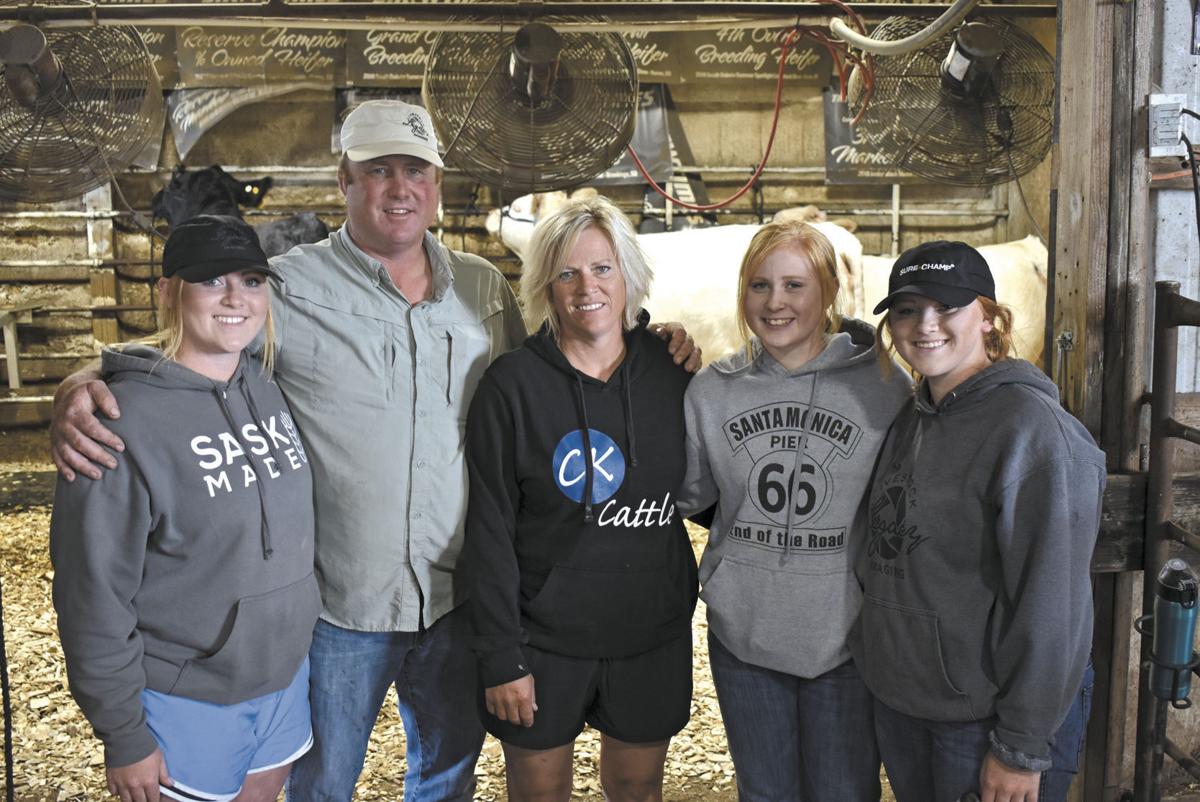 Cagney. left, Chris, Kristi, Kenidey and Chesney Effling stand in their barn where they clean and prepare cattle for shows.

Over the last four months, the Effling household has felt a little different. Like many across the globe, the COVID-19 pandemic brought everyone back home for months of uncertain futures.

For Kristi and Chris Effling, owners of CK Cattle in Highmore, South Dakota, watching their daughters’ activities come to a standstill after years of being on the go was tough to manage.

“It’s like going 75 miles per hour and hitting a traffic jam,” Chris said. “Road rage starts to set in a little bit and that’s kind of what has been happening in America and with our youth. They’re used to going 75 and then they stopped.”

As the pandemic progressed, organizers began to discuss how youth activities could resume and which ones would be canceled. As luck would have it for the Efflings and many other children born and raised on cattle operations, Junior National shows are right around the corner.

When Chris and Kristi confirmed that several of the prominent youth shows would continue – all three of which their daughters participate in – they said the moment was magical.

“It’s something I’ll never forget,” Chris said. “It was just like putting a Hemi in our kids.”

On July 5, the American-International Charolais Association Junior National Show will kick off a set of three weeks that Chris said their family will never forget. July 5-10 the Charolais Junior Nationals will be held in the Swiftel Center in Brookings, South Dakota – which was the planned home of the show.

Right after that, the American Junior Simmental Association National Classic will be held in the same center July 11-16. All the while, the 2020 American Hereford Association Junior Expo will be held July 10-15 down in Kansas City, Missouri.

The Efflings will be at each one.

Chris and Kristi’s three daughters – Cagney, Chesney and Kenidey – all show and raise three different types of cattle. Cagney, who shows Charolais cattle, will be exhibiting in her last Junior Nationals this year at age 21. Chesney, an incoming freshman at Kansas State University, will be showing Hereford cattle. Kenidey, an incoming freshman at Highmore High School, will be showing Simmentals.

As the date rapidly approaches, both Kristi and Chris joked that they have no concrete plans on how to manage all three shows. Cagney said it will likely come down to splitting up the team to best manage their time.

“I’m just going to live in Brookings for a couple of weeks,” Kristi joked.

Putting on the show

The Efflings have a unique connection to Junior National shows. While their family has been involved in many of these shows year-in-and-year-out, the Efflings put on a new hat this year as the coordinators of the Charolais show.

Kristi, has experience organizing events from her time as a university extension agent. Chris worked with the American Hereford Association for many years organizing Junior National shows. They also have regional junior show experience. They hosted South Dakota events in 2012 and 2017.

But this year had a new challenge beyond the typical hurdles of planning an event that brings in thousands of people – how do you manage a show with a pandemic?

For the Efflings, it all started with Gov. Kristi Noem. As she worked to keep South Dakota open, the Efflings were able to work with the Swiftel Center in Brookings and with a local epidemiologist who helped advise them on the trends of the virus.

“It’s been instrumental to move forward with the show,” Kristi Effling said.

While the planning of the event went well virtually, the team surrounding the Efflings and national advisors came together in May in their first face-to-face meeting to lay out exactly what guidelines need to be put in place.

The main changes for the Charolais Junior show will be in the form of a cut down schedule, spread out meal areas, and overall social distancing guidelines to help keep people apart as best as they can. The main problem, however, has always been in the form of the unknowns. As the virus has progressed and attitudes have changed, Kristi said it’s been tedious to plan around.

“The biggest challenge is aiming for a moving target,” she said.

While the Charolais show will probably be the most “normal” event due to the pre-existing plan to host it in Brookings, the Efflings helped friends at the American Simmental Association. The Simmental show, which was supposed to be held in Grand Island, Nebraska, was quickly moved to the Swiftel Center in just 45 days of planning.

“It’ll be a quick changeover to take things out and sanitize,” Kristi said.

Darla Aegerter is in her second year as the American Simmental Association youth programs manager. While the 45-day mark was a tough ask, she said many came together to make it work.

Much like the Charolais show, the Simmental show has been shortened from its normal week schedule. Some shows, which featured close contact with different students, will be cut from the show to both save time on their shortened schedule and increase social distancing. Apart from that, Aegerter said she hopes the show feels as normal as possible for those participating.

“We want to make sure we are apart in the lines and check-in, and a few things like that,” she said.

While attendance concerns were raised throughout the planning process of both shows premiering in Brookings, Aegerter and Effling both confirmed that their respective shows will most likely see record numbers in 2020.

The Simmental show is confirmed for 580 exhibitors with 917 head of cattle entered to be shown, according to Aegerter.

“People are ready to get out and get amongst their peers,” she said.

After months of preparing to miss the shows and now getting to prepare cattle for the shows, Kristi said she is just happy people will be able to socialize for the first time this summer.

“There are so many things to do at these Junior National shows,” Kristi said. “It’s not just a livestock show. There are contests, and each breed runs their show a bit different.”

“There is always a game being played and a football being thrown around,” Chris said.

However, with distancing guidelines in place and recommendations for keeping spacing at all times, Kristi said it has been difficult planning social distancing at an event all about socializing.

“People’s comfort levels are so different right now,” she said. “You have to do what you’re comfortable with.”

For Cagney, this show hits a little closer to home, as she will be showing for the last time. The Kansas State senior said as she prepares for her last show at a Charolais Junior National event, she is looking forward to continuing her livestock judging at K-State in the fall.

Cagney, a former Charolais Junior board member, isn’t the only one interconnected with their breed. Chesney is aiming to join the Hereford board and Kenidey said she plans to when she’s older. For all three, the idea of missing out on their way of connecting with their friends was devastating. Especially after Cagney had to cut her junior year of college short while Chesney missed prom and graduation.

“It was pretty devastating,” Kristi said.

When it comes down to it, Chris Effling said he is just happy that the associations took a chance and kept planning as if it could happen. He said he is thankful they didn’t throw in the towel too soon.

“Without a doubt, people will always remember (these shows),” Chris said.

“Especially the kids who knew there was a chance they couldn’t show, they’re going to remember they got to,” Kristi added.

The Efflings own and operate CK Cattle with roughly 300 head of primarily Sim-Angus cattle.

They’ve been at their Highmore operation for roughly 16 years after moving from the Gettysburg area where Kristi’s parents – the Wagner’s – still operate Wagner Cattle in partnership with the Efflings.