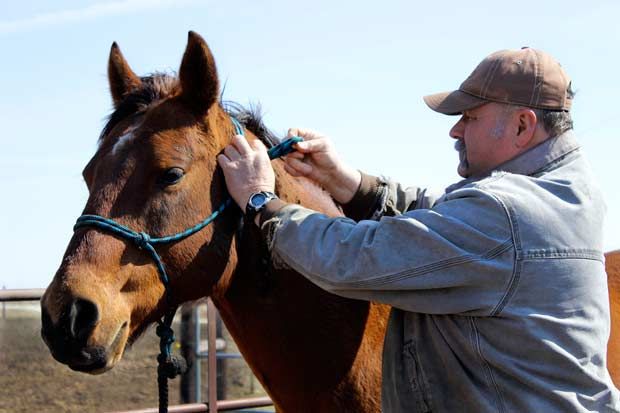 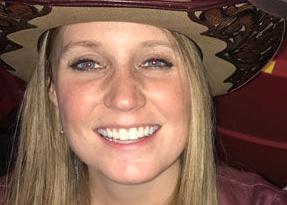 You go out to your pasture and find your horse is stumbling and walking with his head down. Right away you catch him up and bring him in the barn. Once he’s inside, he starts pressing his head against the wall. Of course, you are very concerned and call your equine veterinarian right away.

This is a case study from a horse that I saw this week and is shared with the owner’s permission.

Signalment: 17 year old Quarter Horse gelding used for ranching and trail rides. Has not been hauled anywhere this year.

History: This horse was vaccinated with West Nile virus, western and eastern equine encephalitis viruses, rabies, and tetanus in the spring. No other horses on the premises are sick. No other horses have been hauled to large horse shows or trail rides anywhere.

Physical examination: The first thing that I did was a complete physical examination. Temperature was 97.8 degrees F (normal), heart rate was 30 beats per minute (a little high in a resting horse), respiratory rate was 12 breaths per minute (normal), mucous membranes were pink and dry (dehydration), capillary refill time was normal (perfusion is adequate). Gut sounds were increased in all quadrants of his abdomen. Skin pinch test was prolonged, indicating dehydration.

His body condition was 4/9 (slightly thin) and haircoat normal. His facial reflexes were normal.

Proprioception (knowing where his feet are) was decreased all around. He walked with his head down and stumbled when his head was not pressed to the wall.

Nasogastric intubation revealed an empty stomach. Rectal palpation was not performed, due to his staggering making it unsafe to do in the country.

Diagnostics: A blood sample was taken and sent to the lab for a complete blood count (looking at red blood cells and white blood cells) and chemistry (looking at kidney, liver, etc.).

At-farm treatment: IV fluids were attempted but because he was so unsteady, he kept pulling his IV catheter out. We chose to do fluids via a nasogastric tube that went straight to his stomach.

We also started him on metronidazole and enrofloxacin, which are antibiotics. His anti-inflammatory of choice was dexamethasone.

Because he has been vaccinated his whole life and was up to date, rabies, West Nile, and equine encephalitis viruses were not very likely.

We have to wait on bloodwork results to try to figure out what was going on. Referral was offered but was not feasible.

Diagnostic results: This horse had very high liver values, some of which were four times the normal level. He also had elevated white blood cells, indicating an infectious process as well. This horse had a condition called hepatic (liver) encephalopathy (brain function disease).

Hepatic encephalopathy pathogenesis: When the liver is injured, it is unable to process liver-derived or intestinally-derived toxins, resulting in the toxins having access to the nervous system. When the toxins get into the brain and spinal cord, they then cause neurologic signs and inflammation.

The list of potential diagnoses is long. The most likely include eating weeds that have compounds in them that are toxic to the liver, liver flukes, cholangiohepatitis, and chronic hepatitis – along with many others.

Prognosis and results:The prognosis depends on how severely the liver was injured and how well we were able to stop the toxins and the inflammation.

This horse’s health declined quickly and was humanely euthanized. A necropsy and pathology were not performed.