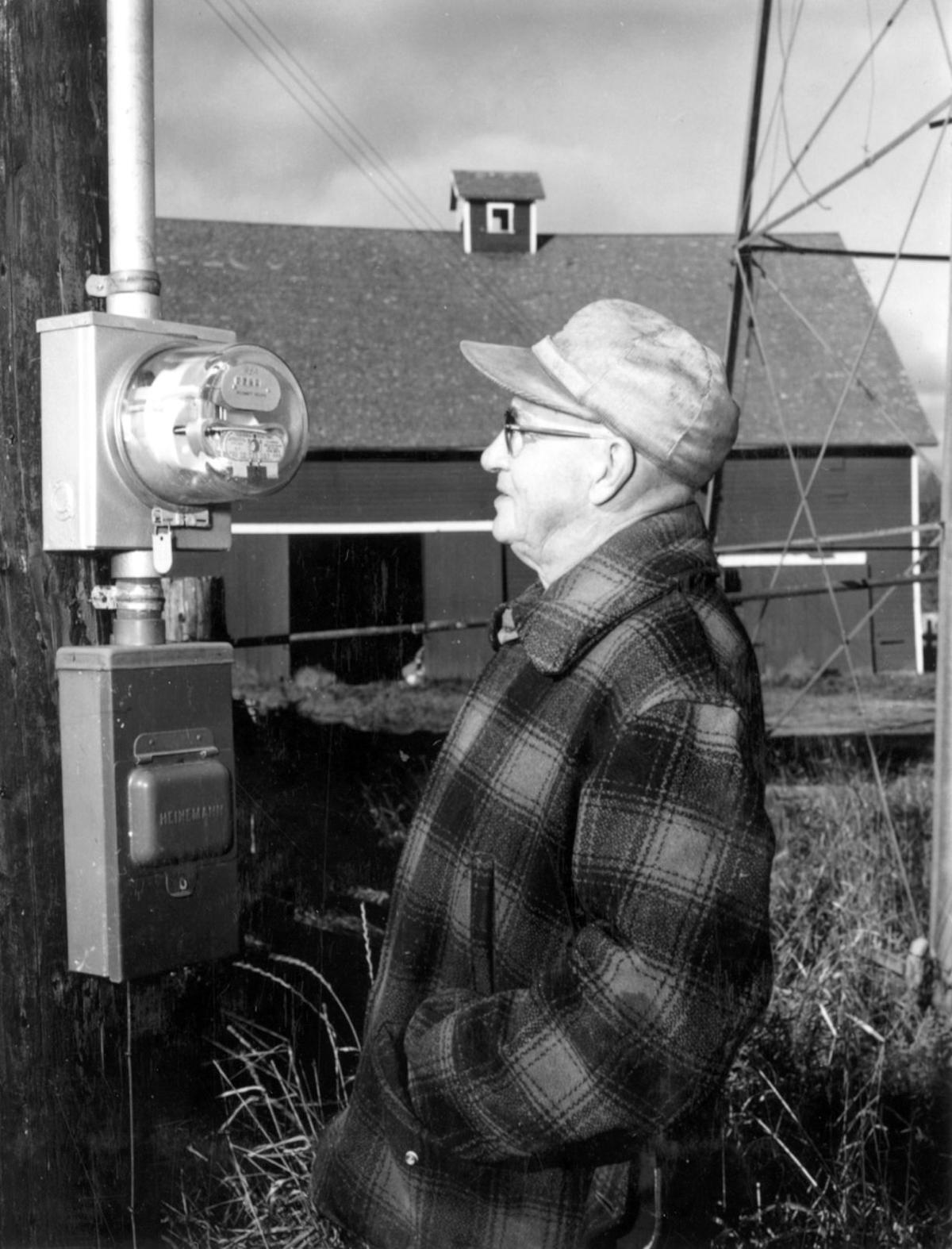 Smith Robbins looks at his electric meter installed on his farm in Watertown S.D, in this photo from 1954. These meters track how much electricity a farm uses. In the beginning, cooperatives encouraged usage by publishing the largest user of electricity in their newsletter. Today, cooperatives promote conserving energy. 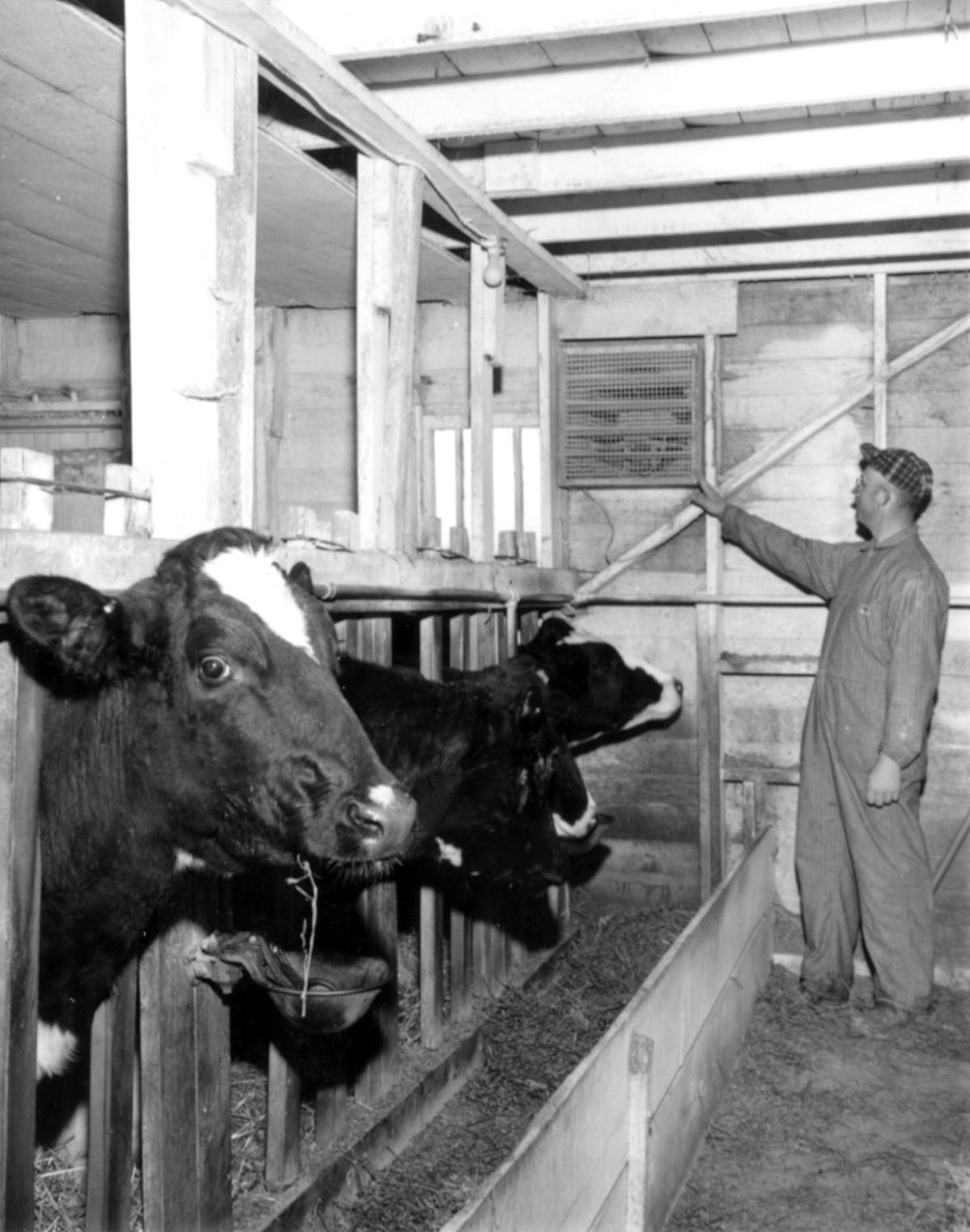 Electric ventilation improved the airy quality in barns for the livestock and farmers, as seen in this photo from Jan. 8, 1959, at the Art Stegeman dairy barn in Huron, S.D. 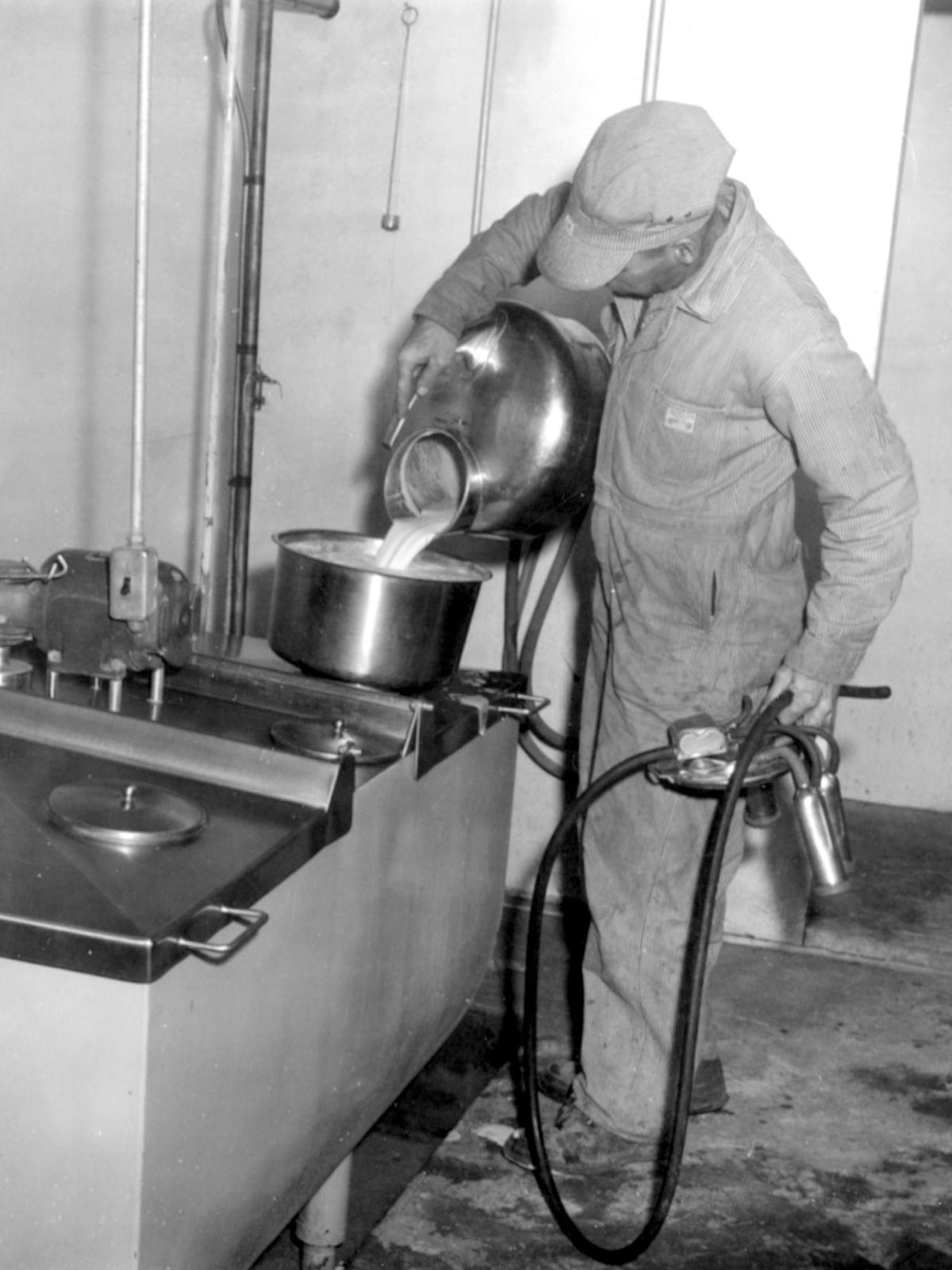 Milk is emptied into the bulk tank at the Haymen Brothers Dairy Farm in Garretson, S.D., in this photo from Nov. 8, 1955. Electric bulk tanks kept milk at a cool consistent temperature, reducing spoilage before it was shipped to the creamery.

Imagine turning the lights on for the very first time. Rural electrification changed life on farms in South Dakota, especially those involved in dairy and poultry production.

Many farms in South Dakota did not have electricity until the 1950s and used wind energy, stationary engines and tractors to generate needed power.

Rural electrification began with experiments in the 1920s that provided central station power to farmers. South Dakota’s experimental test line ran from Sioux Falls to 17 farms in Renner. Manufacturers of electric appliances, like General Motors and General Electric, began selling the need of electricity to consumers long before electrification reached them, marketing an easier and quicker way to work appealed to many rural residents who in turn began to demand electricity and the opportunities that their urban cousins enjoyed.

As early as 1880s, urban communities like Aberdeen, Brookings and Sioux Falls developed municipal electric utilities. The vast distances between farms, ranches and smaller communities made it too costly for municipal utilities to build electric lines in rural South Dakota. It was not until the President Franklin D. Roosevelt signed the Rural Electrification Act of 1936, forming the Rural Electrification Administration, that electricity became available to many rural areas.

From 1935 to 1955, the majority of South Dakota farms, ranches, and rural communities gained electricity. Progress in South Dakota was slow due to the vast distances between farms, and World War II stalled progress in the early 1940s. Some ranches in more remote areas did not have access to electricity until the 1960s, relying on wind or gas generators to produce electricity.

Harnessing the wind to produce electricity is not a new technology. Between the 1870s and the 1930s, thousands of famers across the U.S. used wind to pump water. In the 1920s, small wind turbines generated 32-volt electricity for farm and home use.

Farmers could purchase small generating plants from Delco, Prest-O-Lite, Exide or other manufacturers. These farm lighting units consisted of an electrical generator, an engine to drive the generator and a bank of storage batteries to supply power when the generator is not running.

Manufacturers provided all manner of household appliances and tools that ran on 32 volts. Those 32-volt wind generators were the ancestors of today’s wind turbines.

Connecting to the grid with co-ops

Today, South Dakota has 28 distribution cooperatives that power 65,166 miles of electrical lines across the state of South Dakota. Electric cooperatives invest in innovative power generating technologies to meet the growing demand for energy. Today, 70% of South Dakota’s net electricity generation is from renewable resources – 46% from hydroelectric and 24% from wind.

The Rural Electrification Act provided the funding for cooperatives to bring power to the people in rural South Dakota.

It was the catalyst for improving sanitation, increasing production, and reducing labor on farms and ranches across South Dakota.

The South Dakota Agricultural Heritage Museum’s exhibit, Power to the People: Electrifying Rural South Dakota, explores the history of rural electric cooperatives and the changes in dairy production, poultry production, and food preservation resulting from electrification. It opened Oct. 20, 2019, and runs through Sept. 1, 2021. The museum, located on 11th Street on the SDSU campus, is open Monday through Saturday, 10 a.m. to 5 p.m. Admission is free. (The museum is closed due to COVID-19 precautions. Check the museum website for updates.)