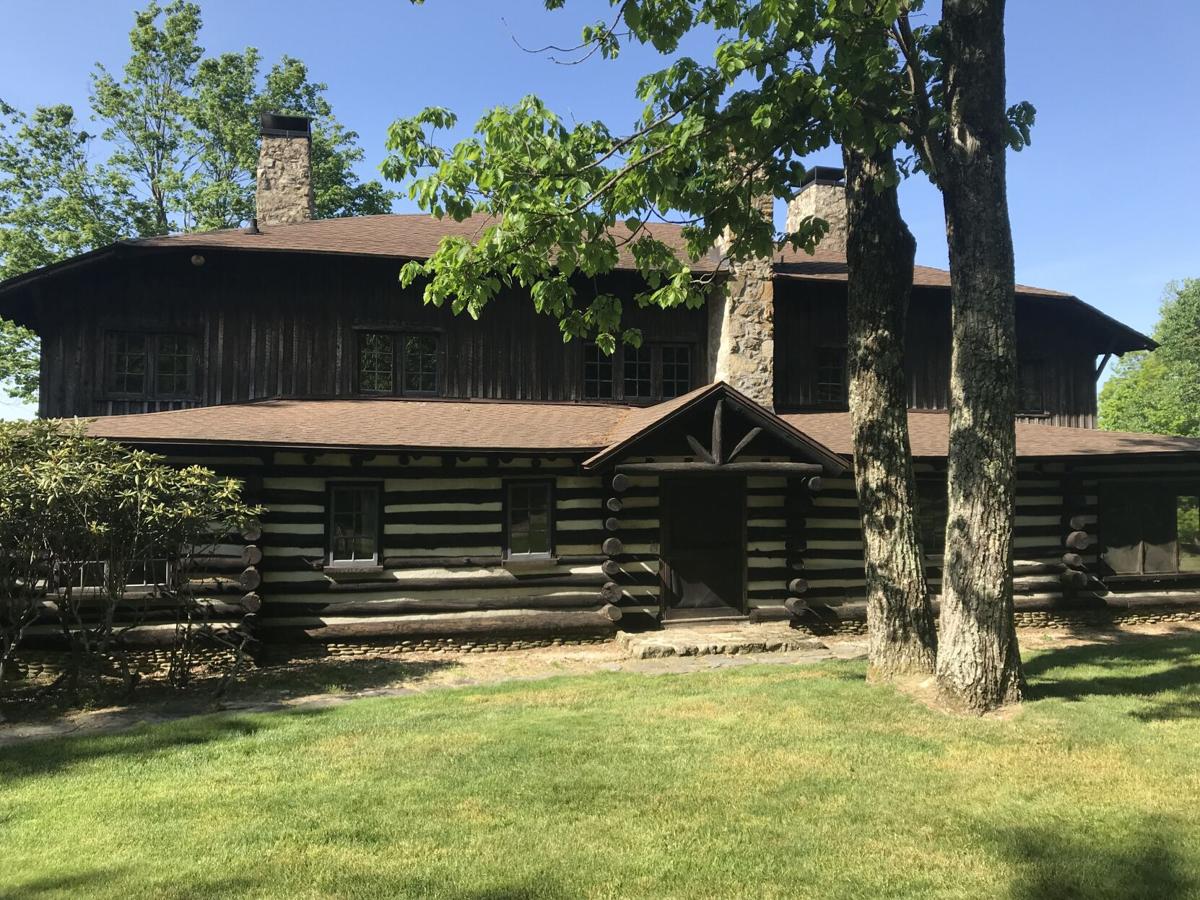 The man who built the 1935 log house, Frank W. Rogers Sr., co-founded the law firm now known as Woods Rogers, in Roanoke, which is about the size of Sioux Falls. Rogers was the father-in-law of a Virginia governor. 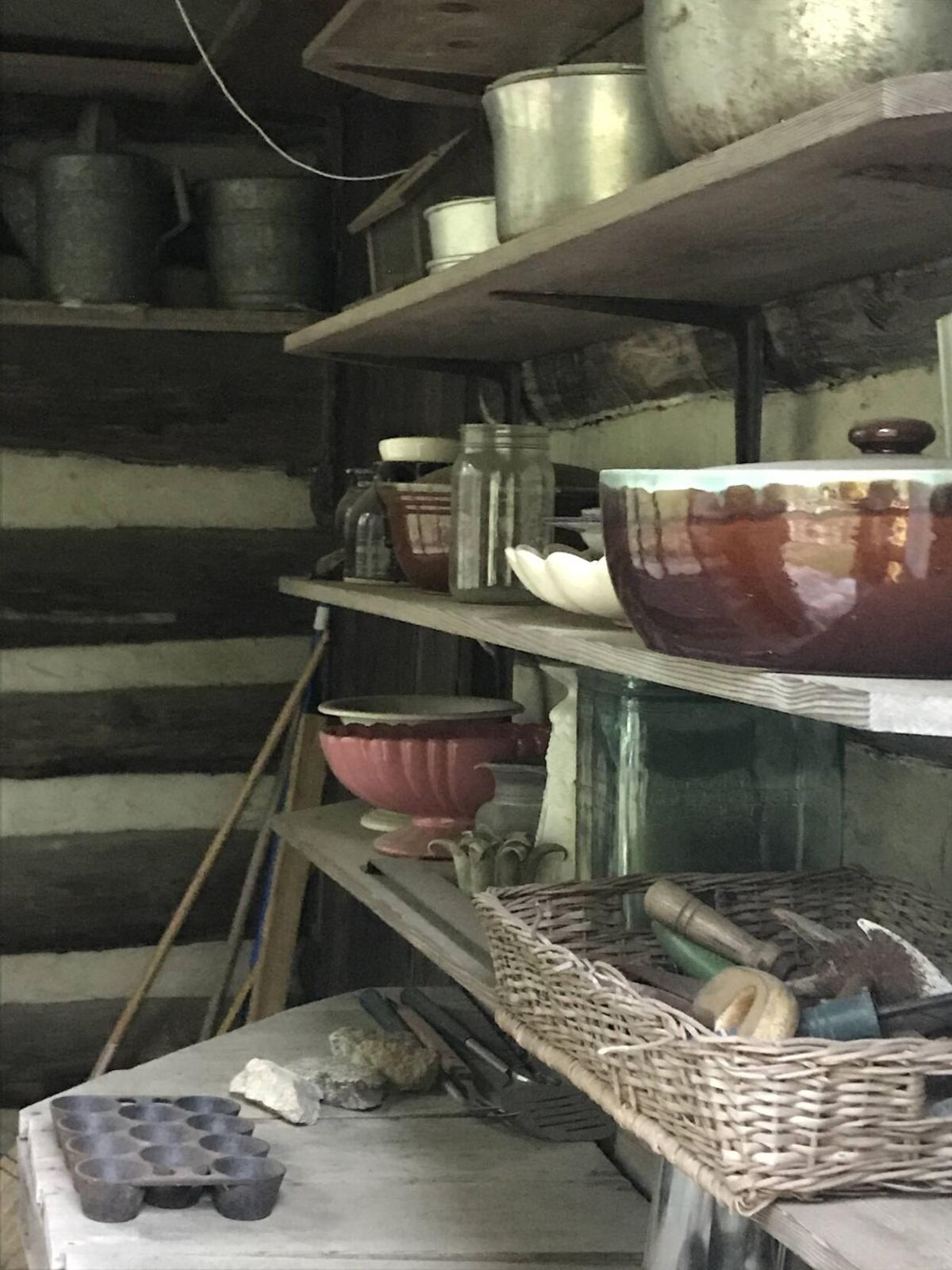 Antiques fill the shelves of the larder off the kitchen. 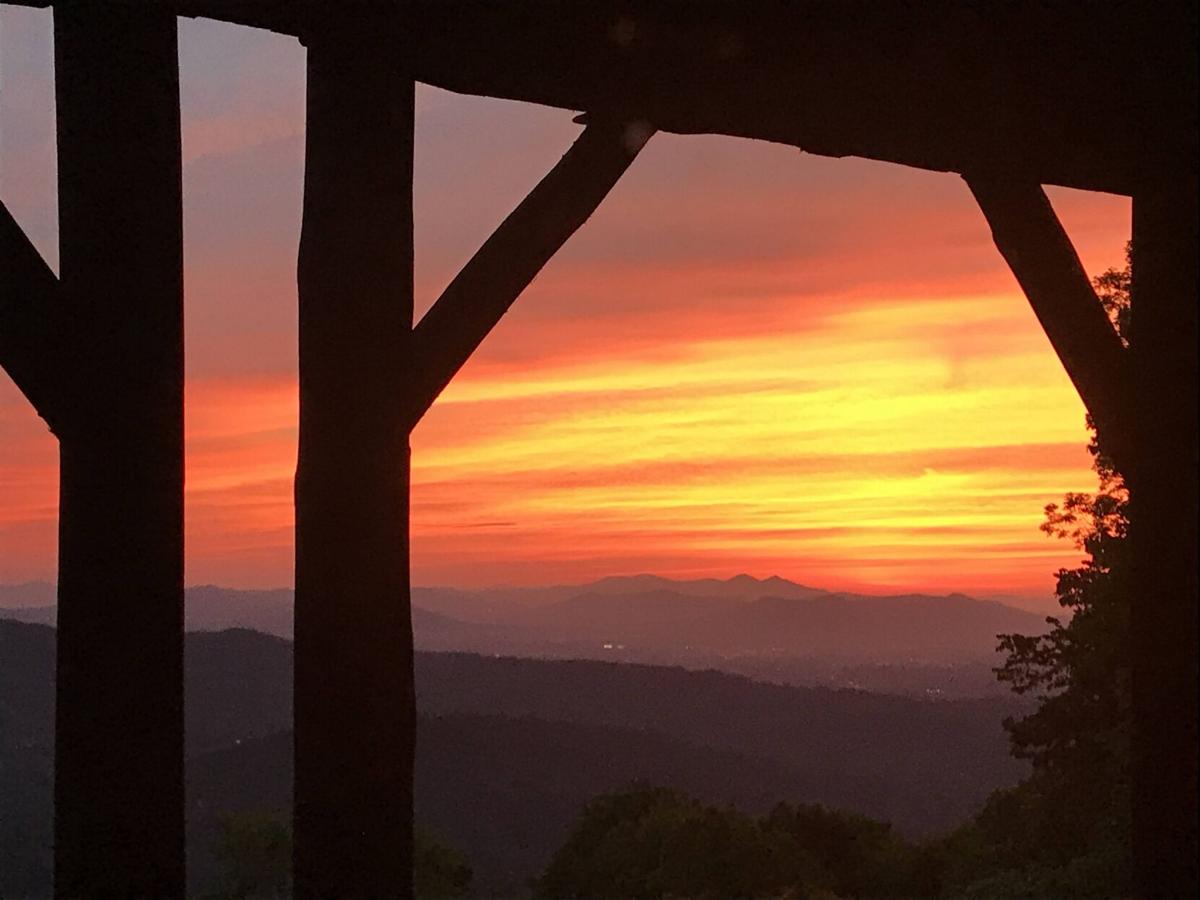 We take our sunsets for granted on the prairie. People who live in the mountains only get to view a sunset if they are at the top of a mountain. 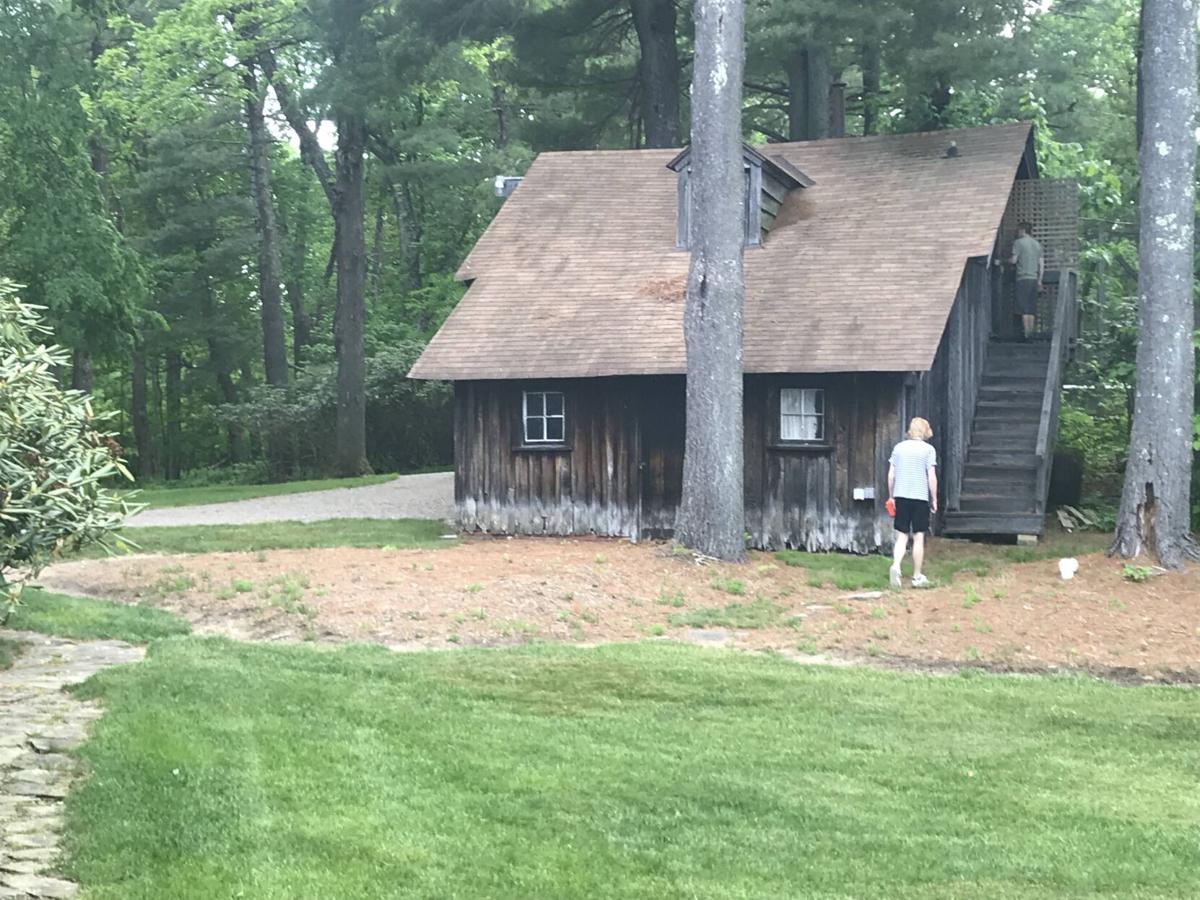 Quarters above the garage once housed the property's caretaker. 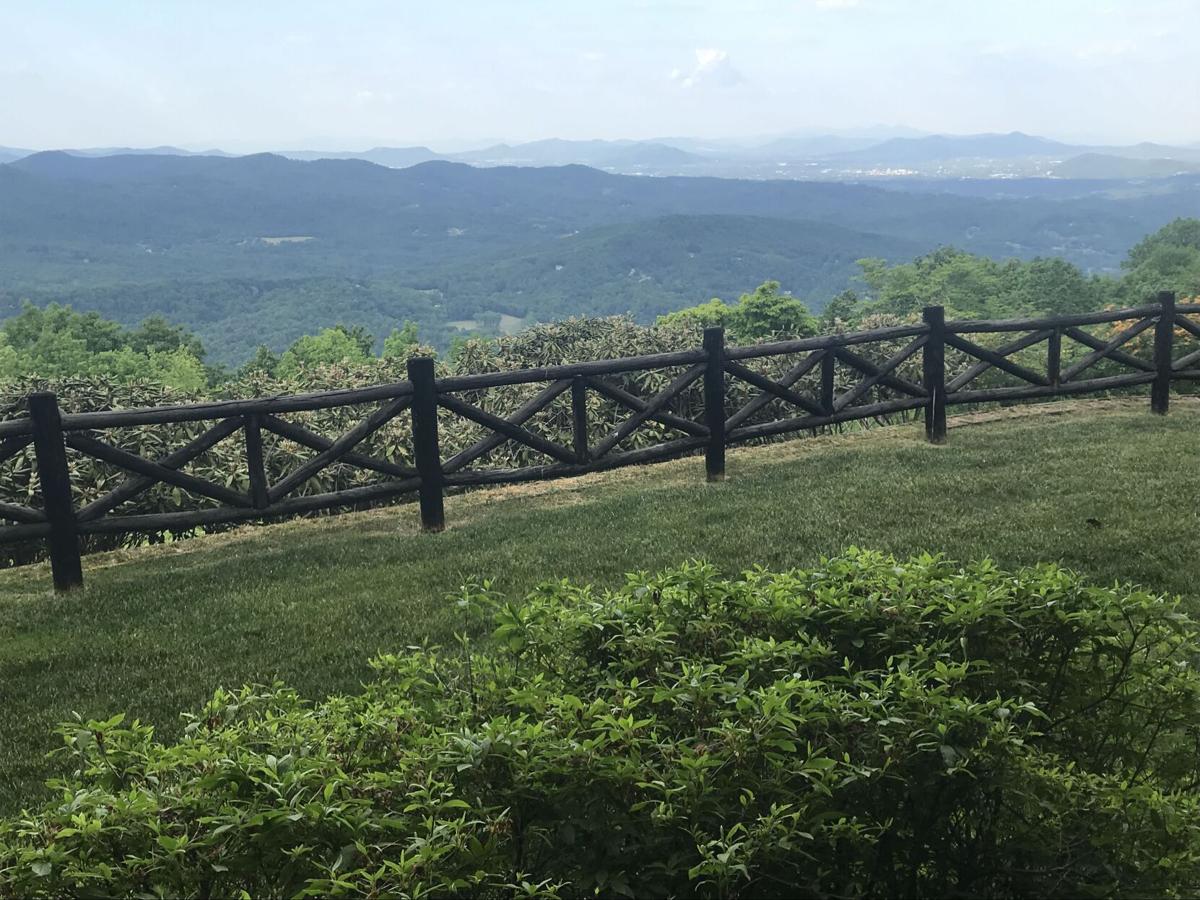 Visitors to the cabin can enjoy 40-mile views across the Blue Ridge Mountains.

Don’t long for the good old days, for you don’t know whether they were any better than today.

I don’t doubt that King Solomon, who wrote that line, is right. But it’s difficult, while staying in a beautiful log cabin in Appalachia, to resist the desire to step back in time.

We spent about a week in Roanoke County, Virginia, this spring to attend my son’s college graduation, which coronavirus had pushed back by a year. My friends invited us to stay in their mountain cabin, aptly named The Look Off for its 40-mile views across the Blue Ridge Mountains. Reality was a wonderful surprise compared with what we had visualized as a “cabin.”

The six-bedroom, four-bathroom log house was built in 1935 by Roanoke attorney Frank Rogers Sr. and his wife, Ann Jett, as a summer home for the family to flee the pollen and oppressive heat of the Roanoke Valley.

After this summer, it’s easy to imagine needing an escape in those pre-air-conditioning days. In a circa-1940 Roanoke World News article about the house, journalist Dorothy Coulter reminded readers that “a couple of thousand feet up is as good as a couple of thousand miles northward” and she was right. The Look Off, at about 2,900 feet above sea level, is always at least 8 degrees cooler than the city in the valley (elevation about 1,000 feet), and it gets chilly enough at night to require extra blankets.

Visiting the cabin was like time-traveling to vintage television’s Walton’s Mountain, except on a much grander scale and with modern conveniences such as indoor plumbing and electricity.

As readers of this column know, I sometimes veer into writing about rock houses. This time it’s a decades-old log structure which, incidentally, takes a lot of maintenance.

My friends Chip and Diane bought the house with another couple in late 2017, and Diane spent several months tediously scrubbing each log – blackened from eight decades of dust and fireplace smoke – with peroxide rinsed with vinegar. The 29- by 40-foot great room has a vaulted ceiling that extends to the second-story roofline. Two massive granite fireplaces, each with 4- by 5-foot openings, have flue liners marked “WPA.”

Chip suspects that the builders hired stonemasons from the Works Progress Administration, which is responsible for many of the stone bridges on the nearby Blue Ridge Parkway.

“It’s astonishing because it’s the middle of the Great Depression,” Chip says of the timeline for constructing the huge log house.

The board-and-batten second floor includes what is marked on the original architect drawings as the “servant’s room” with its own bathroom. Ann Jett Rogers outfitted the house with furnishings that were already antiques in the late 1930s.

A local woodworker who recently visited the cabin confirmed that the railing up the stairs and around the balcony is American chestnut. He believes the logs are chestnut as well.

“Chestnut was particularly rot-resistant, so it would have been a good choice for the logs,” Chip says.

Blight wiped out the American chestnut over a century ago, devastating much of the Appalachian economy.

“It is possible that when the cabin was built, there were numerous dead chestnuts still standing on the property,” Chip says. They would then have been harvested for construction.

The grounds include a garage with caretaker’s quarters above, a barn built with broad planks reminiscent of John Walton’s TV sawmill, and a tennis court. The third generation of the Rogers family hosted tennis tournaments. The new owners found a 1940s steamroller that had been used to pack down the clay court. When they decided to resurface it, they hauled away 11 truckloads of the old clay surface.

Frank Rogers Sr. gained fame in 1960 when he was sent to the Soviet Union to represent the family of captured American U-2 spy plane pilot Francis Gary Powers, according to virginiabusiness.com. The Soviets convicted Powers of espionage, later freeing him during a famous Cold-War prisoner swap on a Berlin bridge.

Frank and Ann Jett’s son-in-law Linwood Holton is a former Virginia governor, and their granddaughter is married to U.S. Sen. Tim Kaine.

When my friends bought the cabin from the Rogers family, not only did Ann Jett’s antiques come with the purchase; so also did a stash of love letters written to her by Frank Sr. on law-firm letterhead. The letters were found in storage in an old outbuilding and returned to the Rogers family (with maybe a slight peek at the contents).

A neighbor across the street from The Look Off says she always knew when to expect the Rogers family on the premises. “When the azaleas blossomed in the spring, I knew they’d be moving in,” she said. “When the leaves turned to red and gold in the fall, I knew they’d be packing up to head back to the city.”

Nobody would be able to miss the signs of spring on the mountain: Frank Sr. hired gardeners to plant 2,000 rhododendrons on the 70-acre property. Many of those bushes are still there today, though a gypsy moth infestation killed many trees about 15 years ago.

It’s admirable that a family who had the means to build a house in the middle of the 1930s had the foresight and faith in the future to employ workers who needed jobs during the Great Depression. They likely made a lasting impact on future generations. One day during our visit, the fellow who mows the lawn stopped in for a chat. Turns out he’s been the property’s gardener for 39 years. He says the Rogers clan treats him like a member of the family.

Our cool, calm, unplugged stay in The Look Off was exactly what we needed to gather peace and strength for the hot, busy summer ahead of us. People who use the Airbnb app would likely jump at the chance for a getaway in The Look Off, distanced from television and wi-fi and traffic. But hosting a B&B takes a lot of work and defeats the purpose of owning a peaceful retreat. My friends and their co-owners host weddings occasionally, but they don’t plan to regularly rent out The Look Off overnight.

I wonder what the Rogers family of the 1930s would say to any of us who wish we had lived back then. They would probably agree with King Solomon, and they would remind us that someday the 2020s will be the good old days.

The man who built the 1935 log house, Frank W. Rogers Sr., co-founded the law firm now known as Woods Rogers, in Roanoke, which is about the size of Sioux Falls. Rogers was the father-in-law of a Virginia governor. 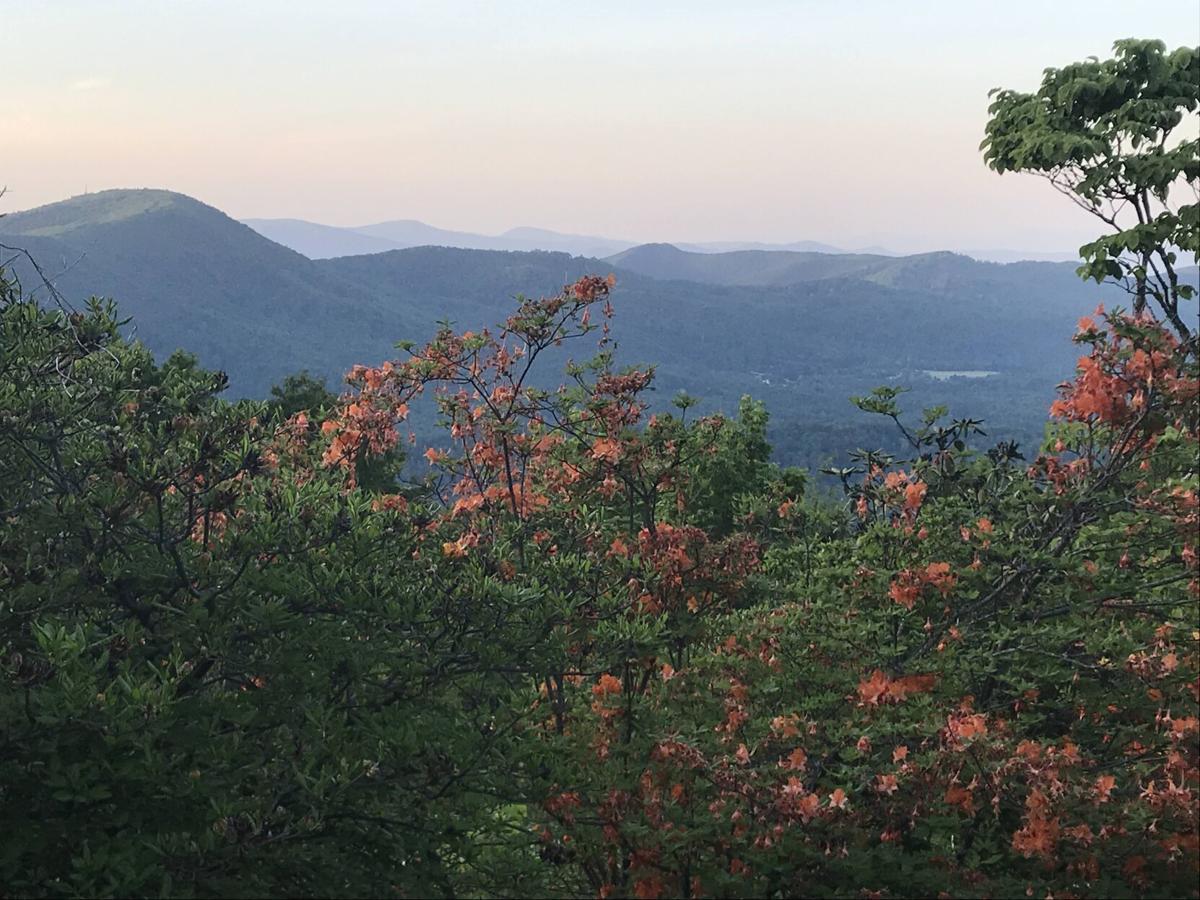 Visitors to the cabin enjoy 40-mile views across the Blue Ridge Mountains.

Antiques fill the shelves of the larder off the kitchen.

We take our sunsets for granted on the prairie. People who live in the mountains only get to view a sunset if they are at the top of a mountain. 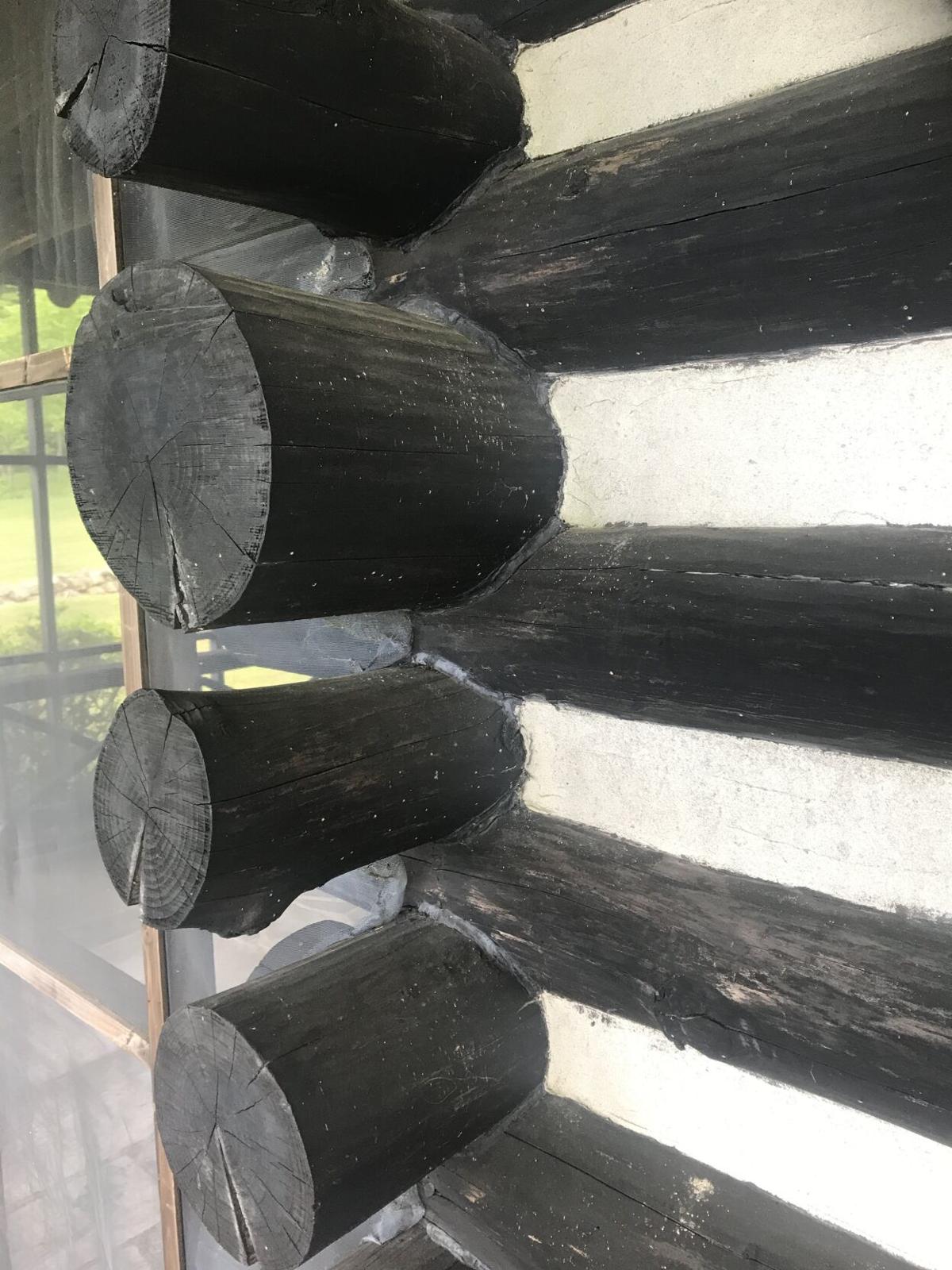 The owners say the logs are likely chestnut harvested from the mountain on which The Look Off sits. The trees were probably already dead from the American chestnut blight of over a century ago.

Quarters above the garage once housed the property's caretaker.

Visitors to the cabin can enjoy 40-mile views across the Blue Ridge Mountains. 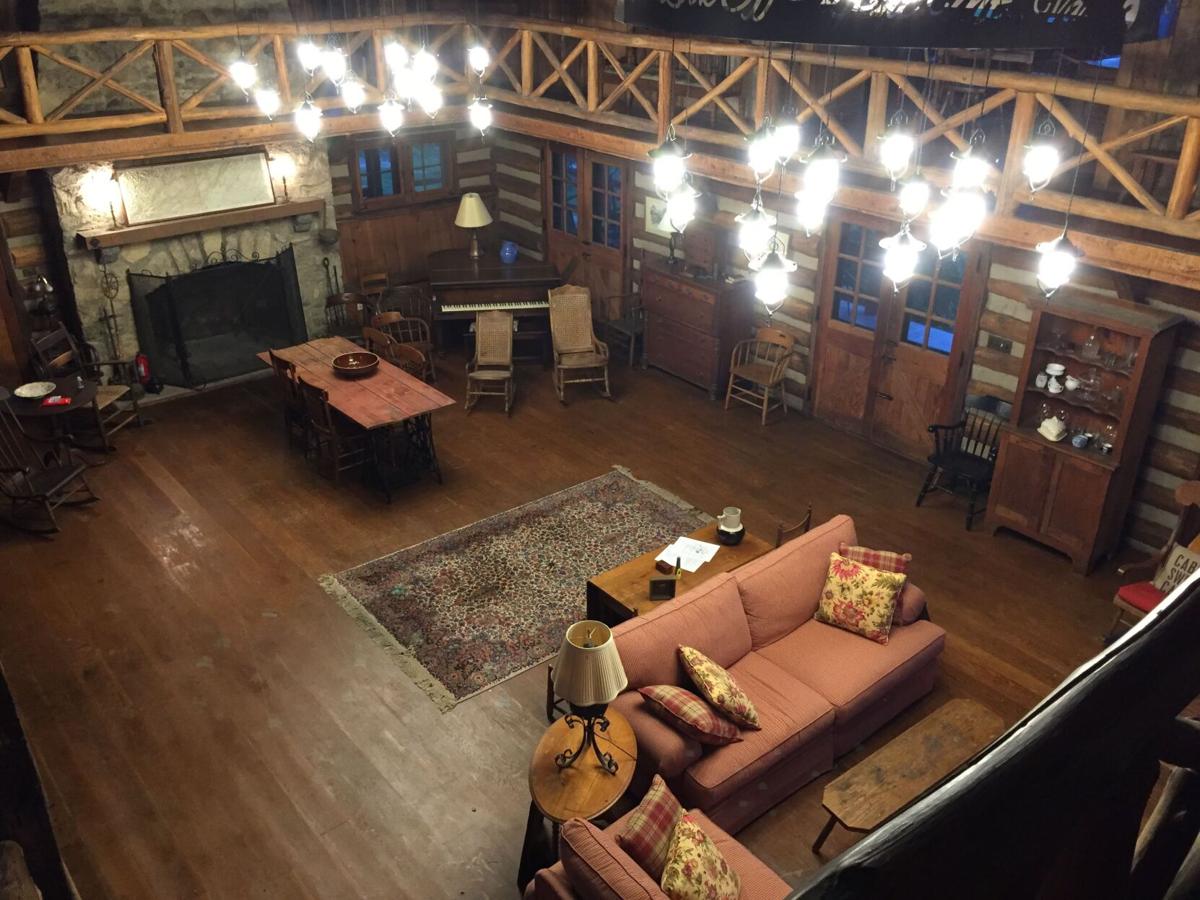 The vaulted ceiling of this Virginia cabin's 29- by 40-foot great room extends to the second-story roofline. Inside the chimney flues are markings that stamp "WPA." The room was dark and dim when the owners bought it in 2017, but my friend Chip remedied the problem by designing and building two chandeliers, then overseeing installation by local craftsman.