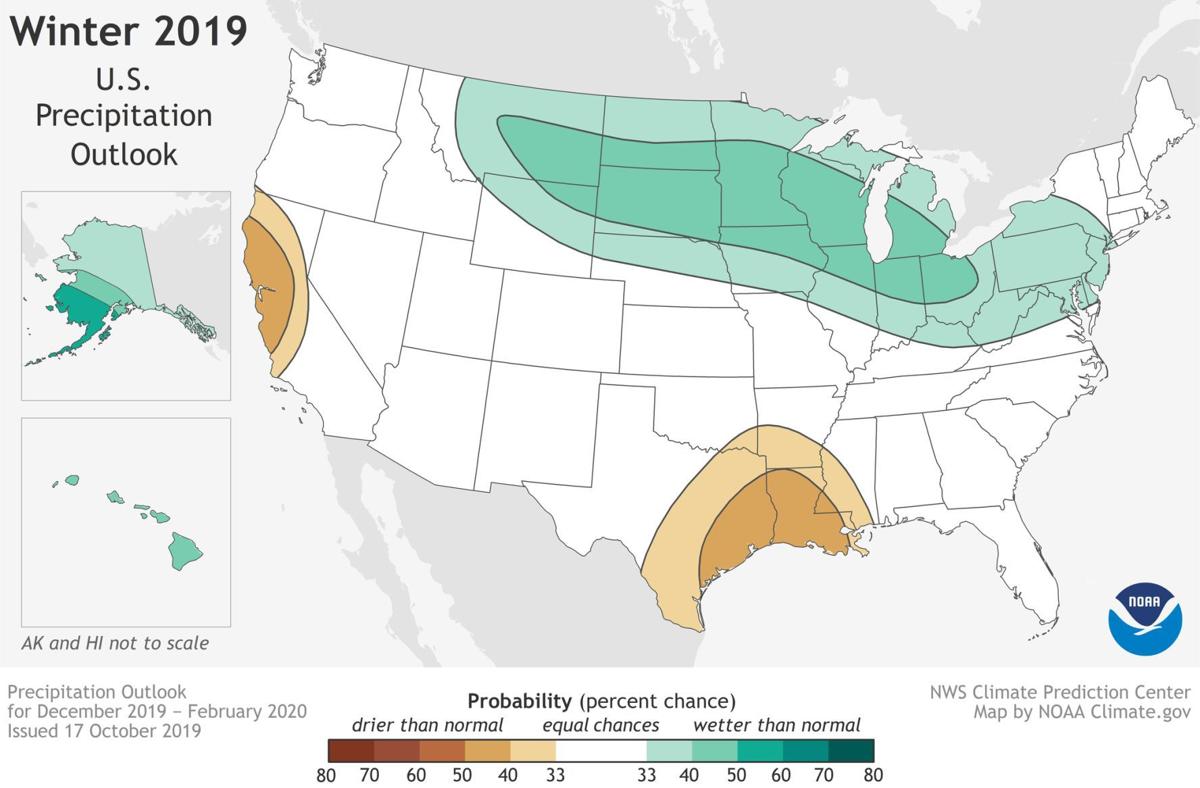 The winter 2019-20 U.S. precipitation outlook from the National Oceanic and Atmospheric Administration. 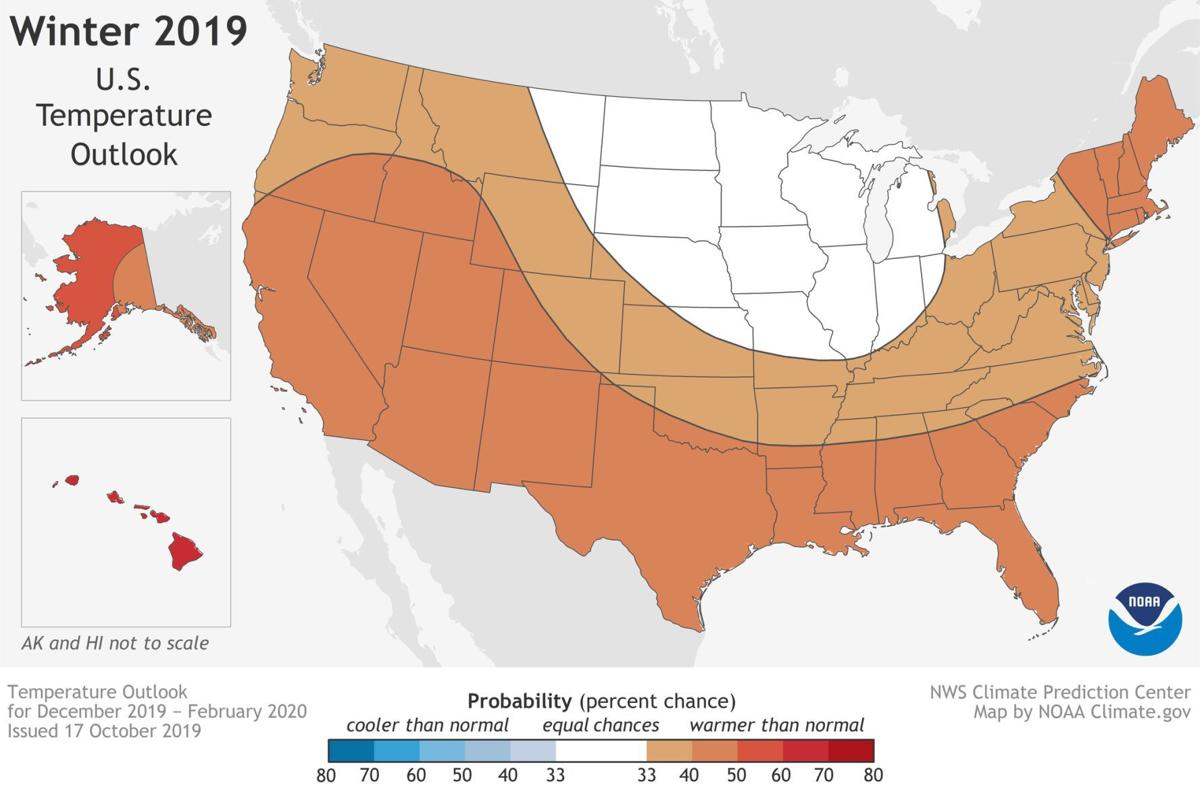 The winter 2019-20 U.S. temperature outlook from the National Oceanic and Atmospheric Administration.

The winter 2019-20 U.S. precipitation outlook from the National Oceanic and Atmospheric Administration.

The winter 2019-20 U.S. temperature outlook from the National Oceanic and Atmospheric Administration.

The Upper Midwest is forecast to have a wetter-than-normal winter with average temperatures, according to the latest forecast from the National Oceanic and Atmospheric Administration.

The outlook from NOAA’s Climate Prediction Center released Oct. 17 is for meteorological winter, which is the months of December, January and February.

Warmer-than-average temperatures are forecast for much of the United States, with the greatest likelihood in Alaska and Hawaii, and more modest probabilities spanning large parts of the lower 48 states from the West across the South and up the eastern seaboard. No part of the United States is favored to have cooler-than-average temperatures this winter.

Wetter-than-average conditions are most likely in Alaska and Hawaii this winter, along with portions of the Northern Plains, Upper Mississippi Valley, the Great Lakes and parts of the Mid-Atlantic and Northeast.

Drier-than-average conditions are most likely for Louisiana, parts of Texas, Mississippi, Arkansas and Oklahoma as well areas of northern and central California.

The remainder of the United States has equal chances for less-than-, almost- or more-than-average precipitation.

While the El Nino Southern Oscillation climate pattern often influences the winter, neutral conditions are in place this year and expected to persist into the spring.

“Without either El Nino or La Nina conditions, short-term climate patterns like the Arctic Oscillation will drive winter weather and could result in large swings in temperature and precipitation,” said Mike Halpert, deputy director of NOAA’s Climate Prediction Center.

NOAA’s seasonal outlooks provide the likelihood that temperatures and total precipitation amounts will be more than, almost or less than average, and how drought conditions are favored to change. The outlook does not project seasonal snowfall accumulations because snow forecasts are generally not predictable more than a week in advance. Even during a warmer-than-average winter periods of cold temperatures and snowfall are expected.

NOAA’s Climate Prediction Center updates the three-month outlook each month. The next update will be available Nov. 21.

After milder-than-normal weather begins winter in December in the Upper Midwest, Arctic air is expected to surge into the region at points during the season. But it’s too soon to tell exactly where the coldest conditions will take hold.

The Upper Midwest isn’t likely to see a polar vortex for the first part of winter, but predicting exactly how the polar vortex will behave several months out is difficult to do. So it still could be a key player in part of the winter.

"The polar vortex is particularly strong this year and that means that frigid air is likely to remain locked up over the polar region early in winter,” said Paul Pastelok with AccuWeather. “Instead cold air that could reach the Midwest at times early in the season is likely to originate from a Siberian Connection, rather than straight from the North Pole, and that has implications on just how cold it will get.”

But conditions may change -- and allow the polar vortex and accompanying Arctic air to arrive later during the winter, he said. He predicts almost- to less-than-normal snowfall across the northern Plains. The Great Lakes are expected to see cold air that will encourage a number of lake-effect snow events.

AccuWeather predicts an “active year” for the Northeast starting after the new year, a likely wet couple of months for the Southeast, a “back-and-forth” weather pattern for much of the winter for the southern Plains, a cool and unsettled pattern for the Southwest and California, and wintry weather more scarce than usual for the Northwest.