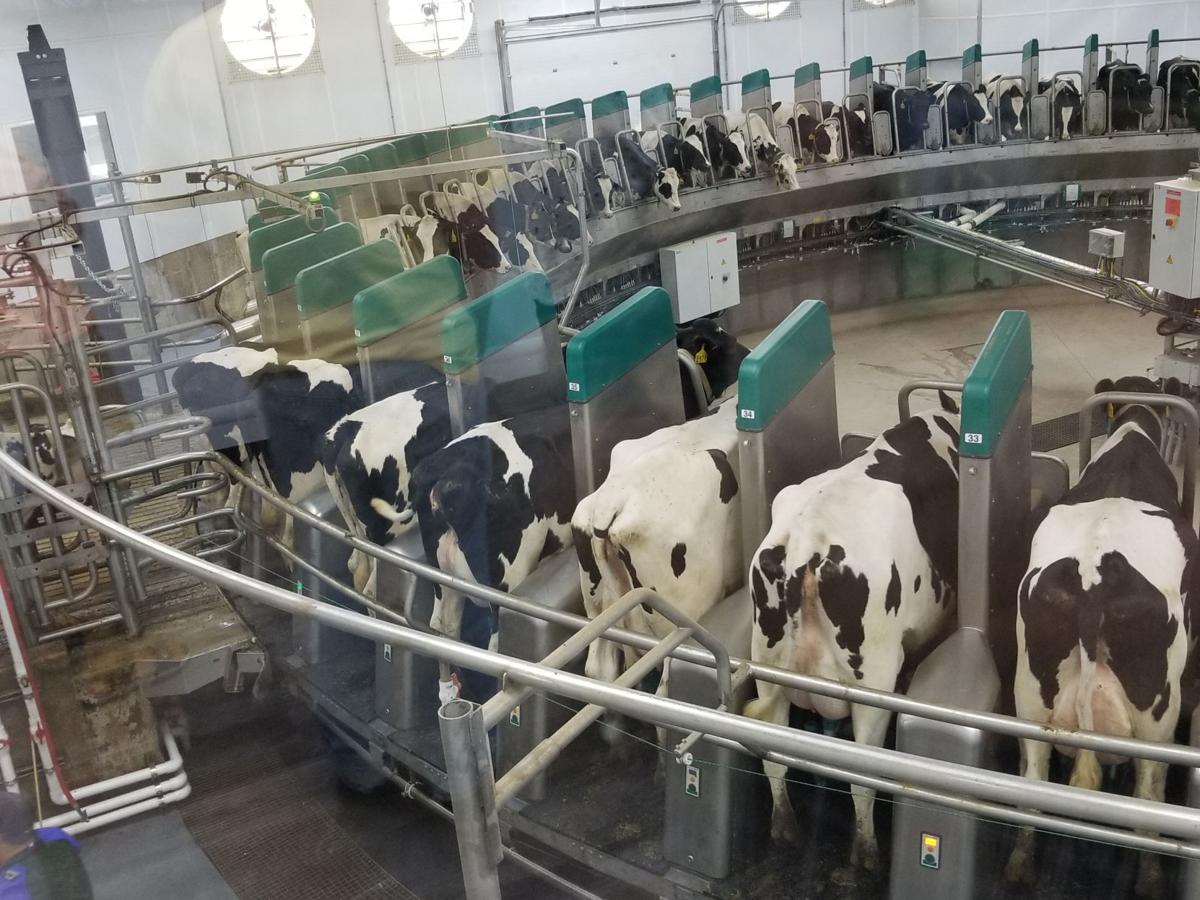 This is a view of part of the robotic rotary milking parlor as taken from the second-floor observation room. Photo by Dale Hildebrant 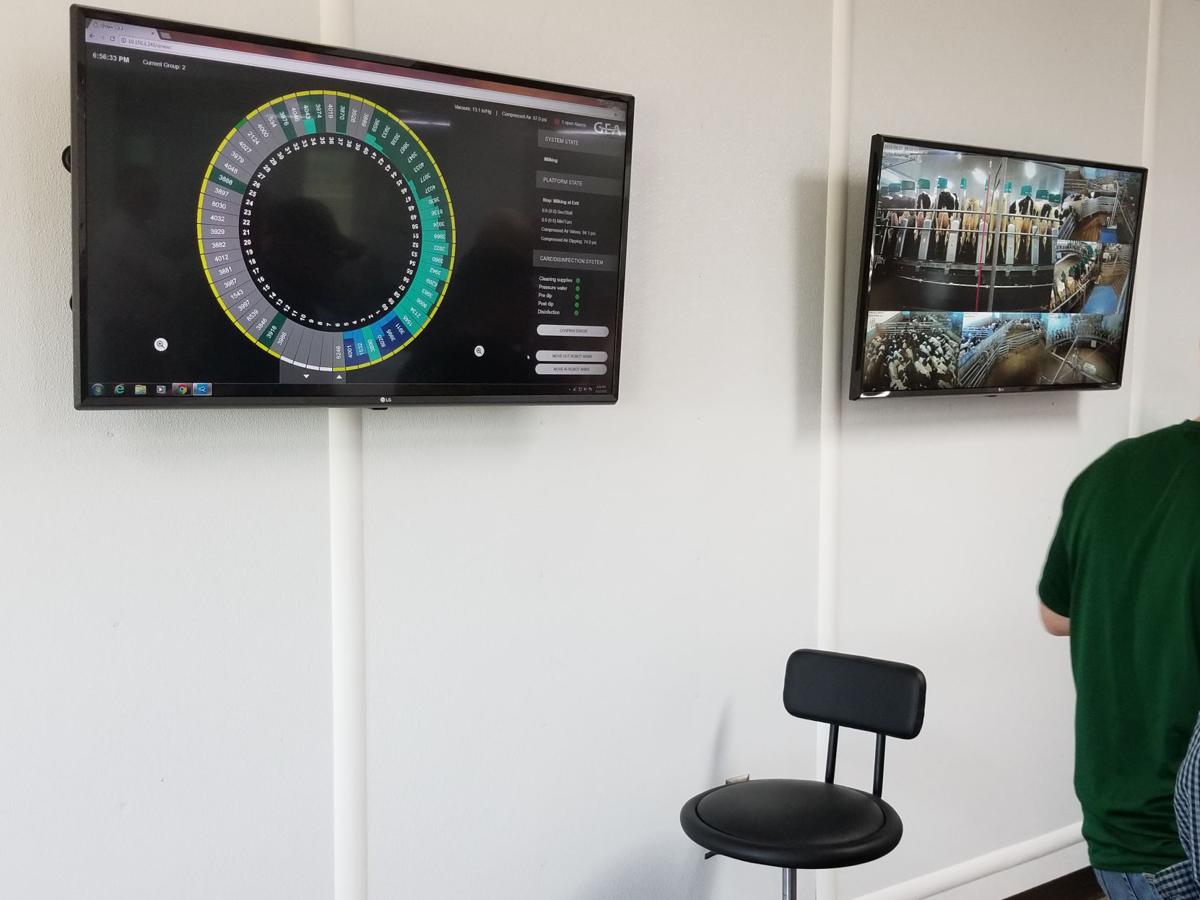 Mounted on the wall of the observation room is the indicator ‘pie-chart’ on the left and on the right is video from various locations in the facility. Photo by Dale Hildebrant

LISBON, N.D. – After using their milking parlor for 31 years, Qual Dairy in Southeast North Dakota decided it was time to install a new facility – one that would require less manpower to run and make use of the latest technology. They decided upon a rotary robotic system, which is only the fourth such system in the U.S.

“Our other parlor was getting old – we were milking 100 cows an hour in the old parlor with three guys and now just one person normally handles the 60 robotic units and allows us to milk around 250 cows an hour,” said Rod Qual, one of the owners.

Robotic milking systems have been around a few years now and rotary parlors even longer but melding the two concepts into one system is very new. The equipment is manufactured by the German company GEA, and the system was installed by Leedstone, Inc., from Melrose, Minn.

All of the activity taking place in the parlor is shown by what could best be described as a digital color pie-chart with 60 pieces of pie, each representing one of the milking robotic units.

Once a cow enters into the robotic milking stall, her number is read from the transponder she wears around her neck. As the milk operation advances, each one of the segments (pieces of pie) representing the cow, changes color to indicate what stage the milking operation is in for that cow.

“That signal from her transponder is read and sent to a computer,” the other brother and owner Alan Qual explained. “The computer sends a signal back saying, ‘I know who this cow is,’ and puts her information on the screen (the colored pie-chart) and sends the information to the milker unit on the proper teat placement for that cow so the inflations can be attached properly.”

Each robotic arm that attaches the milker is equipped with a 3-D digital camera. This camera sees each teat end and works in conjunction with the information stored in the computer for that cow’s udder to attach the inflation. However, sometimes there is an error attaching the milking unit and when that happens the robot will make another attempt in just a few seconds and if after 3 minutes the milker unit isn’t attached, the employee in the parlor will place the unit on the cow.

The milker unit washes the cow’s teats, massages them and strips out the first streams of milk. This milk all goes into a discard pipeline until a photocell in the milker unit determines the milk is pure white. The milk then is switched to another pipeline that flows into a chiller system and then into one of the waiting milk tankers parked outside. The milk is shipped to a dairy plant for processing into various dairy products.

The milking parlor is housed in a two-story building with the 70-foot diameter rotary parlor on the ground floor with a high ceiling. In one corner of the building, an observation/lounge area occupies the second floor and large windows offer a bird’s-eye view of the milking parlor and the flow of cows in and out of the parlor.

Monitors with the pie-chart and live video from many areas of the milking complex are displayed in this observation area.

The cows are handled in groups of about 150.

The use of robotic equipment doesn’t stop there. Upon entering the new free stall barn, there is a robotic feed scraper pushing feed up to the curb where the cows eat. This unit is guided by pins in the floor. Alleys in the barn are scrapped by another robotic unit. The scraper travels at the rate of 9 feet per minute, and the cows don’t seem to pay any attention to the unit as it scrapes the manure into a flume at the end of the alley. Both of these robotic units are also made by GEA.

It has two indoor weather stations that send data to a series of 96 fans located in the north wall of the barn. The fans all have variable frequency motors that allow the air drawn in by the fans to vary according to the need for fresh air. When running at top speed, it allows for a complete change of air in the barn every 1.5 minutes.

All of the feeding takes place in the free stall barn via the feed alley. Their ration consists of hay, soybean meal, cottonseed meal, corn and a vitamin/mineral pack. A cow consumes about 100 pounds of feed each day and drinks between 30-50 gallons of water.

It was mentioned earlier, the cows are handled in groups of about 150 and each of these units of cows can be fed a separate ration, depending on their level of milk production. The higher producing cows are fed a higher percentage of grain, soybean meal and cottonseed. As they get farther into their lactation period and milk production starts to decline, less grain and more forages make up the ration.

Finally, it is interesting to note how quickly the cows adjusted to this new method of milking.

The first time the cows saw the new parlor it took about three hours to get through a group of 150 cows, since they all had to be persuaded somehow to get into the new rotary parlor and then be confronted by a robotic milker. By the fourth milking, about three-quarters of the cows were stepping into the parlor by themselves and in the end, they had to cull only a handful of cows who couldn’t accept the new system.

In some cases, maybe, cows can accept change more readily than humans can.

This is a view of part of the robotic rotary milking parlor as taken from the second-floor observation room. Photo by Dale Hildebrant

Mounted on the wall of the observation room is the indicator ‘pie-chart’ on the left and on the right is video from various locations in the facility. Photo by Dale Hildebrant