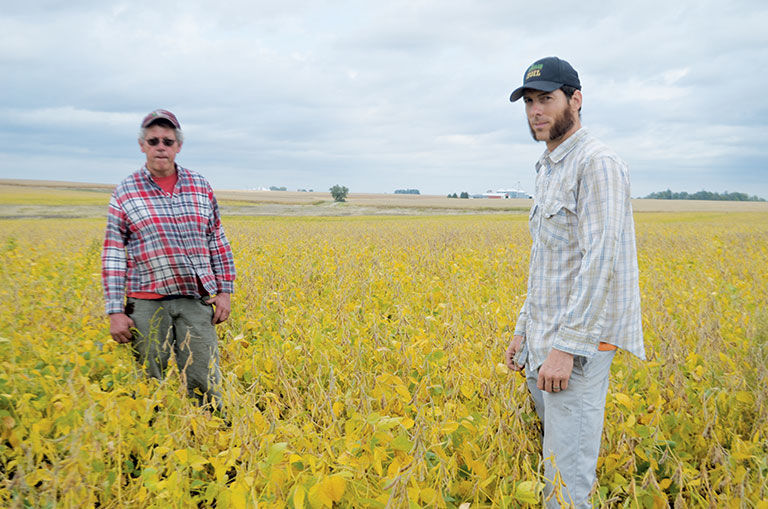 Trent and Levi Lyle monitor the progress of a field of soybeans that is transitioning to organic production Oct. 3. No herbicides were used on the field this season. 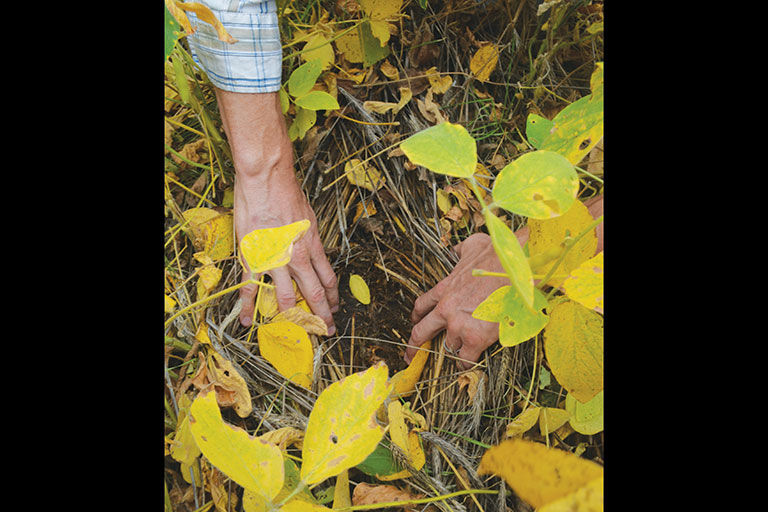 A roller crimper was used to terminate a rye cover crop before planting soybeans on the Lyle farm. Despite the thick mat, the soybeans emerged while weeds were controlled.

KEOTA, Iowa — A passion for organic methods and an interest in maximizing profits on fewer acres led Levi Lyle to transition a portion his family’s farm in eastern Keokuk County to organic row-crop production.

Levi, and his father, Trent, were pleased with the early results Oct. 3 as they surveyed the 40-acre soybean field that is being transitioned to organic production.

The Lyles farm approximately 750 acres, using herbicides to manage weeds on most of the acres, but they hope to see their organic acreage grow.

The 40-acre field in transition was planted with certified organic soybean seed at 200,000 seeds per acre. The beans will be marketed as non-GMO soybeans this fall. Fields must be free of synthetic chemicals, including pesticides and fertilizers, for three years prior to selling crops as certified organic.

Levi, with the help of Vittetoe, Inc. in Keota, Iowa, manufactured a roller crimper implement that he sees as an effective, cost-saving tool in their organic row-crop operation. By manually terminating a rye cover crop with the roller crimper this spring, Levi managed weeds in the transitioning field without the use of herbicides or field cultivation.

After termination, the soybeans emerged successfully through the thick mat of rye.

Trent and Levi said they are looking forward to seeing the yield results in a few weeks.

Both Lyles also work off the farm. Trent works for Iowa City Transit. Levi is a USDA certified organic inspector. They both have experience marketing non-commodity crops produced on their farm, with Trent having previously grown non-GMO grain and Levi growing aronia berries for the past 8 years.

“For an organic market, the best market is the most local,” Levi said, noting this is especially true for small grains.

Cost-share programs can also be utilized in transition years to maintain profitability.

He said there is talk in the area of prices for organic soybeans around $23 per bushel and organic corn near $9.50.

“I think we will see a lot of farm transitioning going on,” Levi said. “One 40 at a time is kind of my attitude.”

He said the ability to include his wife, Jill, and their four children in the farming operation without worrying about chemical exposure is a big motivation behind the transition.

Trent survived Stage 3 cancer, which had spread to his lungs, when Levi was young, and Trent said he wonders whether his exposure to herbicides when less was known about their safety in the 1970s could have been related.

“My passion for organic farming was inspired by my dad overcoming cancer,” Levi said.

For farmers interested in growing crops for organic markets, Levi said having a plan for rotations and keeping good records are important.

“Any organic farm has to be very thorough in their documentation,” he said. “An organic farm is audited every year.”

Some of the key regulations include only using non-GMO seeds; using only fertilizers free of chemicals, meaning no liquid anhydrous or off-farm manure with chemical additives; and keeping maps of where organic fields are located, Levi said.

“The organic systems that work the best have livestock,” Levi said. Livestock can utilize forage from a failed crop or from silage, add value during hay rotations and provide fertilizer for the operation.

Levi plans to utilize a red clover cover crop prior to a corn rotation to supplement nitrogen.

“The rotation is a big part of it. It has to be at least a three year rotation,” he said.

Farms with the best weed management may extend rotations to four or even five years.

“That’s where the small grains come in,” Levi said. “Oats, rye and wheat are the top three small grains that would be considered.”

In order to learn more about row-crop production methods before the use of pesticides, Levi has talked with experienced farmers in the area who are familiar with older production methods, such as tillage with field cultivators or rotary hoes.

Networking with other organic producers is also an important part of the transition.

“The network of local producers I’ve grown to know through the Iowa Organic Association, Practical Farmers of Iowa, the Iowa State University Organic Program, Iowa Department of Agriculture Organic Program, as well as, ISU Extension and Outreach has been invaluable,” he said.

Farmers who are interested in growing organic row crops should start by familiarizing themselves with the USDA National Organic Program regulations, Levi said. Iowa farmers can also learn more by attending the Iowa Organic Conference Nov. 19-20 in Iowa City.

Update on corn diseases and fungicide decisions in Iowa

Editor’s note: The following was written by Alison Robertson, Iowa State University professor of plant pathology and microbiology, for the Int…

Hail storm does damage in fields across Iowa

It was late June, but it could have been confused for the middle of January.

Trent and Levi Lyle monitor the progress of a field of soybeans that is transitioning to organic production Oct. 3. No herbicides were used on the field this season.

A roller crimper was used to terminate a rye cover crop before planting soybeans on the Lyle farm. Despite the thick mat, the soybeans emerged while weeds were controlled.