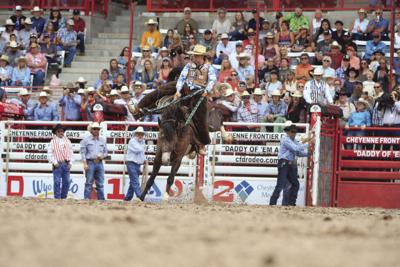 Navigating their way through the pandemic has been a rougher ride than getting bucked off a wild bronc.

That’s the take of a group of young women on the bronc rider circuit who had been having the time of their lives learning within a team sport and growing in confidence. The women had even scored a set of documentary appearances on the Ride-TV network.

Initially called Texas Bronc Riders Association, managers Daryl McElroy and his wife Michelle launched the rodeo association in July 2016 and enjoyed helping young women learn the ropes of competing in what has been a male-dominated sport.

After a wild ride through TV celebrity status, and some of the women veering into the social media swirl, the McElroys have chosen to stay the course of simply teaching women the art of bronc riding. The network went on to make a third season of the show called “Cowgirls.”

“We also had a huge response from the Cowboy Channel in 2020, but then COVID happened,” Daryl McElroy said.

He closed the Texas Bronc Riders Association for the year. Now he’s re-starting the competition under a new name: Ladies Ranch Bronc World Championships. But it’s a struggle.

Canadian events are on hold due to COVID restrictions there. Australia is holding events, but riders aren’t allowed to travel to the U.S. without having to quarantine, he said.

They are, however, looking forward to holding events in South Dakota, Colorado and Texas with a finals during two go-rounds at Cheyenne Frontier Days, known as the “Daddy of ‘em All.”

They’re lining up Professional Rodeo Cowboy Association bronc riding competitions in Belle Fourche, South Dakota for the women. Their next event is the Elizabeth Stampede Life, Liberty Rodeo in Elizabeth, Colorado June 12. Then, in South Dakota July 2 and 3 for the Black Hills Roundup and Cheyenne Frontier Days July 24 and 25.

“I’m looking forward to it, and this year is the 125th anniversary of Cheyenne Frontier Days,” McElroy said.

With 45 members across the U.S., Canada and Australia enthusiasm has been ramping up for the sport, although there’s relatively little training for women.

For many of the ladies the McElroys train, it’s their first time crawling on a bronc in a bucking chute. They do a lot of coaching on a bucking machine to simulate a bronc.

They held their first school for 12 women in the winter of 2019. The girls came from northern Montana, Texas, Arkansas, Mississippi and spent the three days in the ground school and learning in a classroom watching riding videos.

The sport has been inspirational and a growing experience.

“Quite a few of the girls who started with us weren’t rodeo girls, and we opened up a whole new world for them,” McElroy said.

He comes from a background riding saddle broncs and fighting bulls. He started the women’s bronc riding group after he broke his back and could no longer rodeo. He brainstormed with his good friend, Chase Richter of R Spade Buckers and wife Michelle and came up with a non-profit program that offered scholarships at the finals.

“I reached out to two young ladies on social media who competed in a few ranch bronc events around Montana. Chase helped arrange for a few other ladies from around the area to compete,” McElroy said.

The female bronc riders ultimately represented six states. He said it was the highlight of the 2016 finals.

The Ride-TV network produced two segments on the McElroys’ scholarship fund and the girls.

It all took a lot of behind-the-scenes work. McElroy got additional assistance from stock contractors Wesley McManus and Gerry Byrn of Diamond Cross Rodeo, and Bob and National Champion of Champion Rodeo Company. They put together 10 bronc riding events for ladies only, riding at some of the United Pro Rodeo Association and Cowboy Professional Rodeo Association events across Texas.

“We worked closely with Diamond Cross and Champion to ensure that we had the right level of bucking horses for the ladies,” McElroy said. “We wanted them to have a challenge but at the same time still be able to make qualified rides.”

The girls draw horses at events. Just like with bull riding, they don’t know which animal they will ride until the last minute. Riding the same stock over the couple of years, the women start to know the horses pretty well.

After two seasons of the TV show, the network wanted to switch to a reality show format. That’s when the McElroys chose to go their own direction. He’s glad they did.

“Once we stepped away from the TV show, it became fun again and the girls that competed at our events really enjoyed it,” McElroy said. 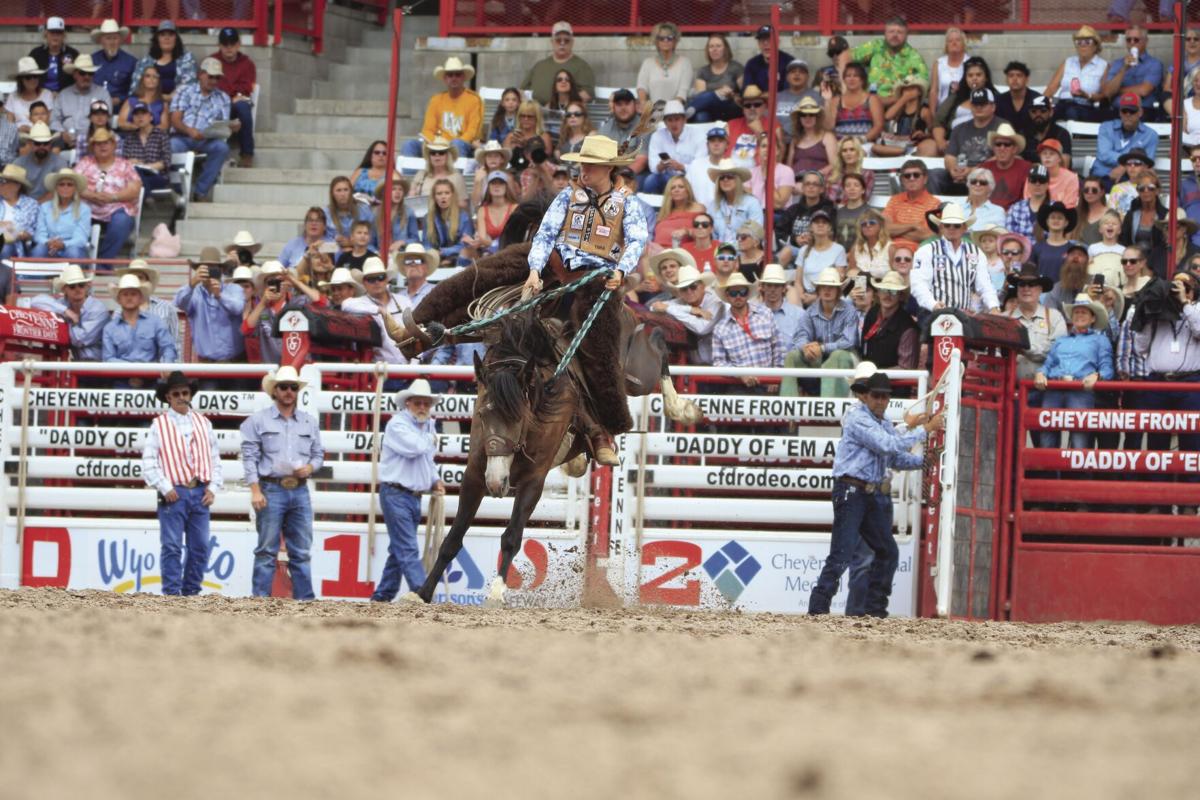 Pearl Kersey rides in the saddle bronc competition at a past Cheyenne Frontier Days. Women in the circuit organized by Daryl McElroy were part of a TV series called “Cowgirls.” 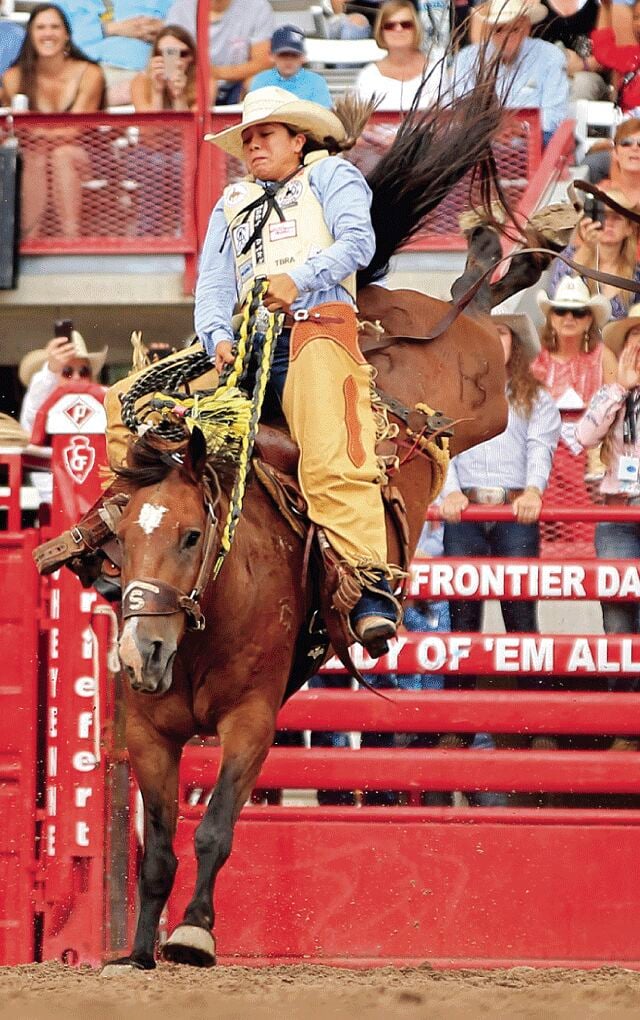 Rider Alondra Castaneda hangs on for a wild ride at the Frontier Days rodeo in Cheyenne, Wyo. The girls will be back in competition this year, competing at the 125th anniversary rodeo. 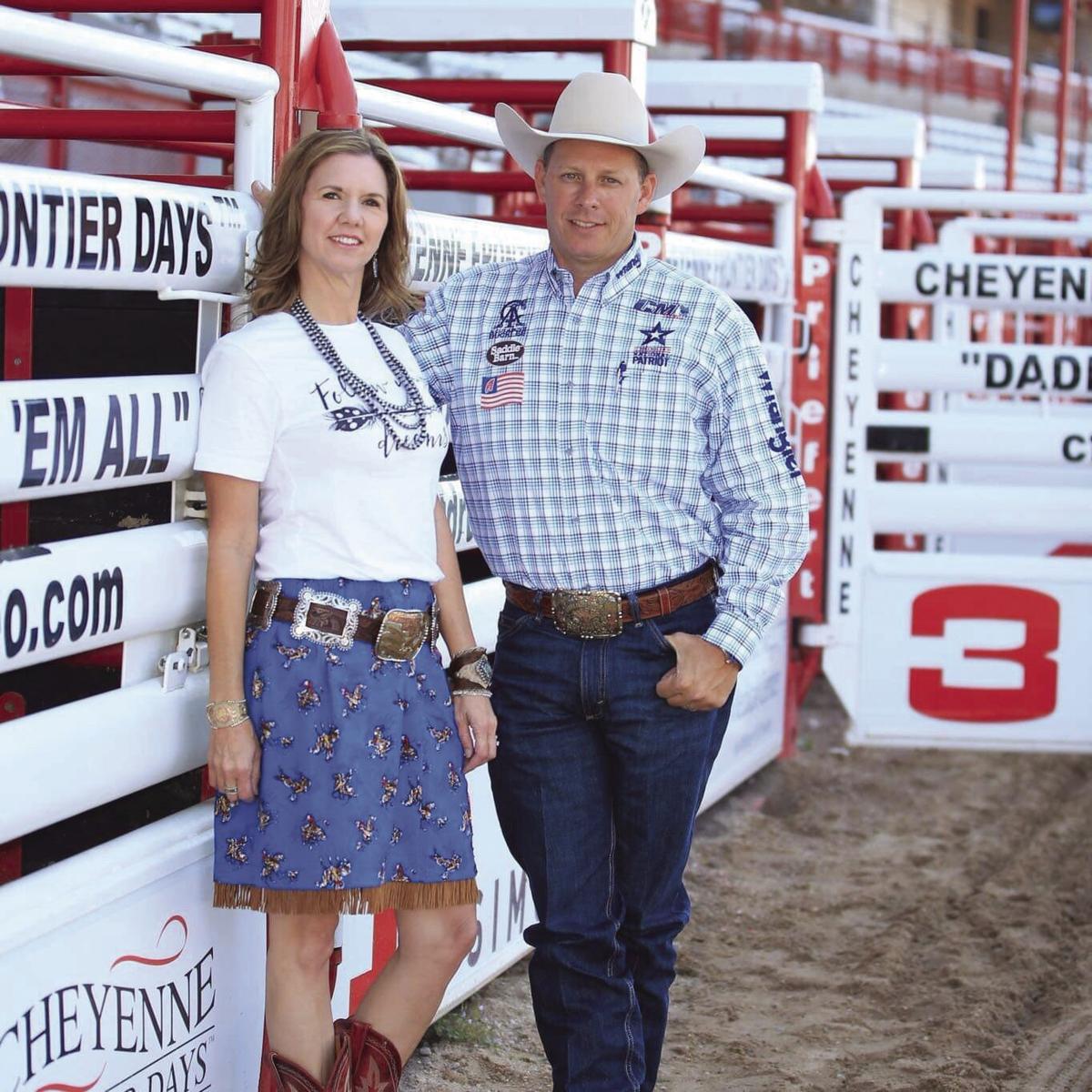 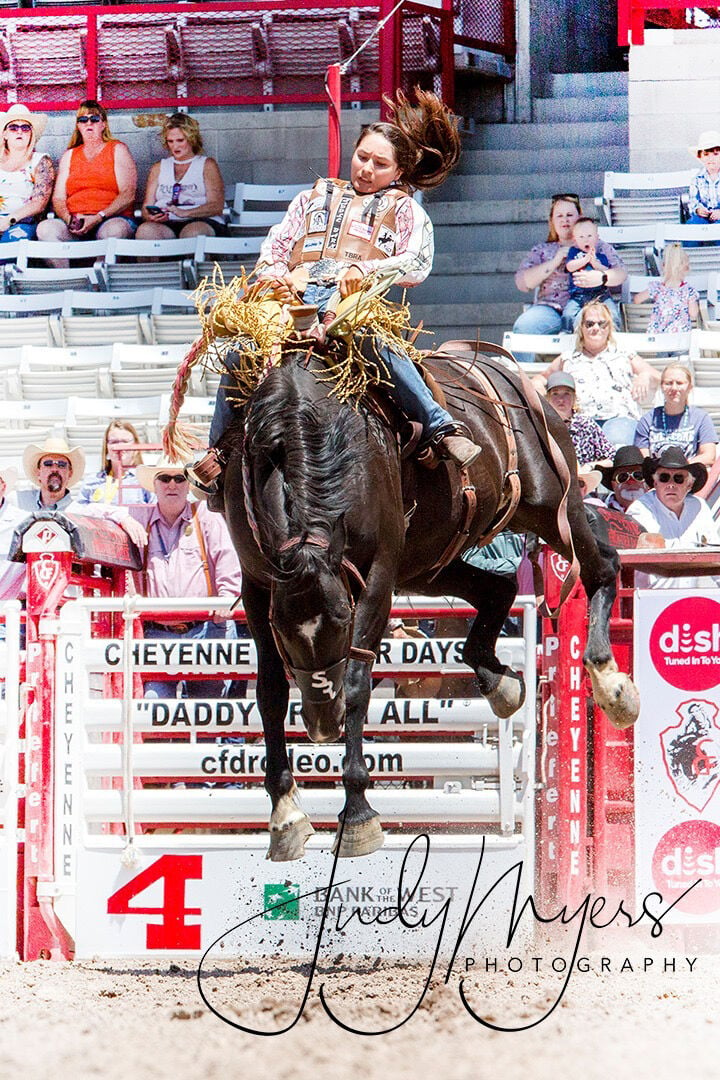 Amaris House rides a bronc at Cheyenne Frontier Days. The new Ladies Ranch Bronc World Championships is an outlet for women in rodeo, and competition is beginning to pick up after COVID delays.