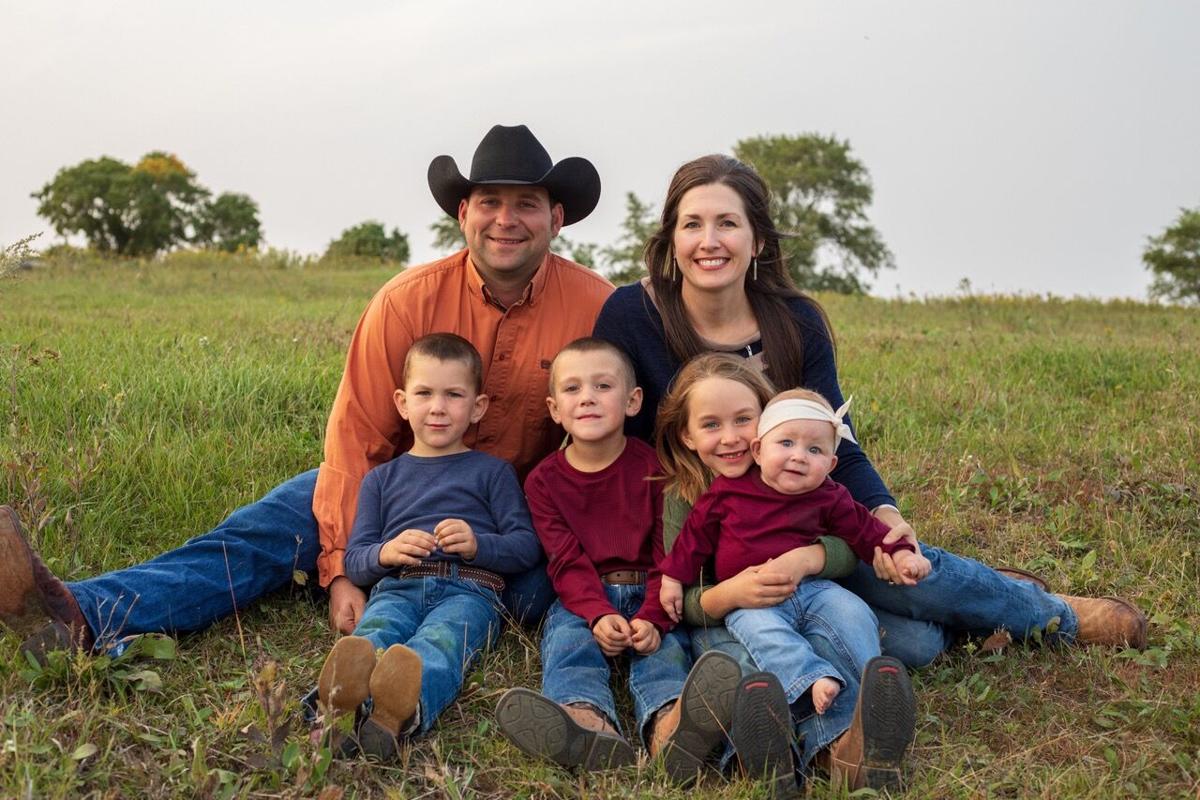 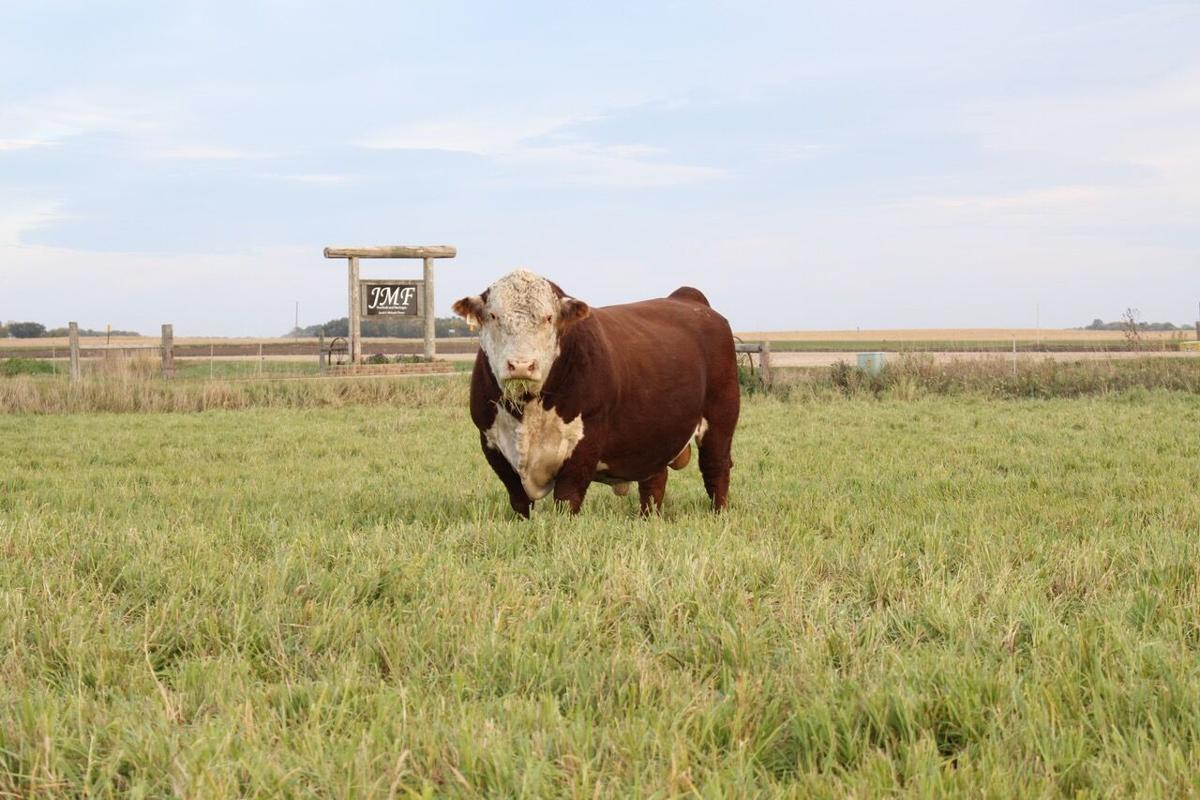 Hickok 15X is a foundation sire at JMF. Hickok has a deep influence in their Hereford program and has many daughters at work in the herd today. Submitted photo.

HOLLOWAY, Minn. – Welcome to the next generation of commercial seedstock producers!

Jared and Makayla Flower (JMF Herefords and SimAngus) live in row crop country but are young ranchers that understand cattle and are technology-savvy.

The Flowers run about 100 registered cows.

They will hold their 8th annual bull sale the first Saturday of February 2022, which includes 2-year-old and yearling Hereford bulls and fall and yearling SimAngus bulls. Heifers are sold by private treaty.

Makayla has also developed her skills and business as a graphic designer for cattle promotion, advertising, and magazines. Her work has quadrupled in recent years.

Through their hard work and shared goals, the Swift County ranchers have successfully become self-employed in west central Minnesota.

Few things make Jared as happy as when their oldest child, Jaelyn, 8, studies a cattle magazine at the breakfast table. Recently she commented to her dad about what she was seeing – “Dad, this article says these bulls are calving ease and a lot of performance – but they are not deep enough flanked to be performance.”

“That’s my kind of girl,” says a proud Jared, noting his daughter’s analytical skills. “I couldn’t ask for better than that. For me, for us, for what we’ve been able to create and do, I wouldn’t know what to ask for more – but it comes with sacrifice. It comes with ‘Don’t clock in and out.’”

During her junior year of high school in 2006, Makayla decided to lease a Simmental heifer calf from the Hilbrands family of Holloway.

“I thought, ‘I’ve helped Dad with cattle all the time, and I just think I’d like to bring some beef cattle to the fair,’” she said.

Jared grew up as part of the Hereford cattle family, and his show cattle were stalled across from Makayla’s. He saw that Makayla was smart and hard-working, but still a little green at showing cattle.

Instead of using a slip knot in the show barn, she double- and triple-tied her calf’s rope. Jared thought he better go over and show her how to tie up a show calf properly.

“I thought I better be the good guy and tell her how to tie a knot,” Jared said. “That knot lasted for a while.”

While Makayla earned her bachelor’s degree in animal science at South Dakota State University, Jared worked at Wulf Limousine. He was also mentored by Mark Frederickson, a prominent Hereford breeder who now lives in Spearfish, S.D.

Married in the fall of 2011, Makayla and Jared worked long hours to save up money for a down payment on a farm site.

After being married only one year, they were approved for a mortgage for a farm site with feed yards and pasture. The site had once been used as the Focus on Efficiency bull test station.

They decided to build a registered herd, so they sold Makayla’s commercial cows and purchased the cows that have become the foundation of their sales today.

But the site didn’t have a house. The couple purchased a 28- by 40-foot mobile home that couldn’t be moved onto the farm until spring. Undaunted, the Flowers remodeled a veterinary room and office in the cattle barn where they lived for the winter.

“We lived there for six months – it was a cozy 12 by 24 feet in two little rooms,” Makayla said. “We calved in the barn, and some of the best memories were hearing those mama cows talking to their babies when they were calving. You knew they were right outside the door, all bedded down in the straw. We were nice and warm in our little spot. Jaylen was 3 months old at the time and was tucked in cozy as could be.”

They had a washer but no dryer.

“We hung our clothing to dry on a line of twine,” said Jared with a grin.

Their home arrived that spring and family/farm life continued. Through the coming years, Jaelyn, Tayton, Ty, and Emerson were born.

This August, the Flowers purchased another farm site just east of their home farm. They sold the mobile home. Now, they can look west and see everything happening over at the home farm, but the new farmhouse is a nice addition for everyone.

With two places, the Flowers can maintain biosecurity, so there are many possibilities for the future. New this winter is a custom-feeding operation. The feeder calves are kept at the new farm site, while the cow herd will spend the winter at the home farm.

Eventually, they hope to add a bull development center for feeding and testing their own bulls.

“We would also like to run 150-200 cows, and whatever we can get out of that supply for bulls,” Jared said.

Their customers are primarily commercial cattle producers looking for good and sound bulls. Registered and show producers also buy from the Flowers.

“We’re not very heavy into the EPD’s genomic testing yet,” he said. “We have better luck at selecting for cattle that perform on grass and last.”

One of their matriarch cows is 14 years old (FHF 343 Nate’s Lady 94T), and they continue to use her genetics to build their herd.

The Flowers understand that a commercial producer needs to keep a cow for a long time to pay for her, so they want to provide longevity. They sell cattle coming from females with superior feet, top notch udders, and great dispositions.

“We want the cow to do as much work as she can,” Jared added.

The 2021 calves were weaned in late October. The cows were moved from summer pasture to wheat regrowth for late-season grazing.

The Flowers expect their cows to have adequate flesh at weaning time. They are working toward a medium-sized cow that weans a calf half her weight.

“We want our cows to be fat when they wean, and calves to be in good flesh,” he said. “The less supplement we have to do to these cows, the more money is in your pocket.”

In addition, the Flowers have decided to move their herd from spring calving to fall calving, over the course of several years.

The winter can extend clear into April with cold rain in west central Minnesota. The fall tends to be beautiful with few flies or calving problems. The area also has a surplus of byproducts that cattle can eat and crop residue/cover crops to graze.

Jared and Makayla hope that – with time – local crop farmers will see the benefits of renting their harvested farmland for grazing cattle, and they appreciate the farmers who allow them to fence cropland now to feed the cows.

“Things that have recently been going on are weaning, building new pens, and fencing at the new place,” Jared said on Nov. 5. “We’re also calving and breeding for fall calves – a new adventure for us.”

Minnesota Farm Guide wishes to thank JMF Herefords for the opportunity to follow along with them this winter. We wish them all the best of growth and success, along with much happiness.

Editor’s note: Minnesota Farm Guide is pleased to announce that John and Lester Schafer will be providing Producer Reports this winter. Their …

Hickok 15X is a foundation sire at JMF. Hickok has a deep influence in their Hereford program and has many daughters at work in the herd today. Submitted photo.