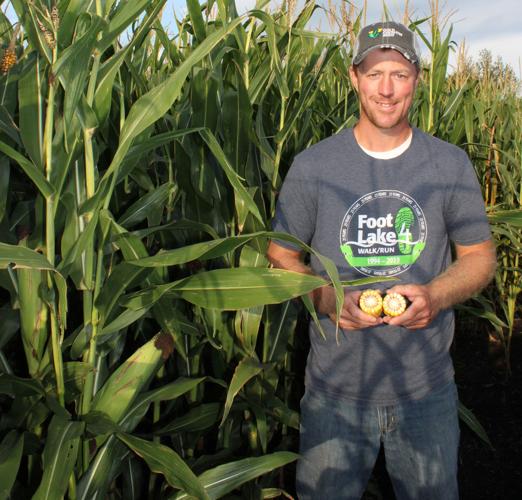 About the cover: Dusten Williamson, Montevideo, Minn., is a new FIRST farmer-member hosting a corn plot this year. He is holding Gold Country 95-day corn with the FIRST plot behind him. Photo by Andrea Johnson. 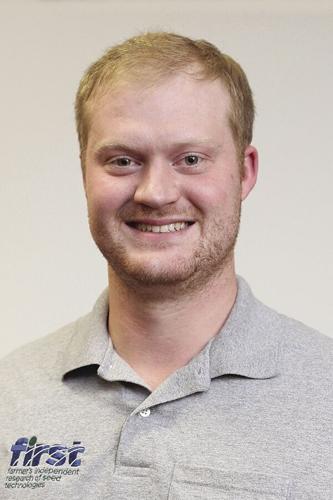 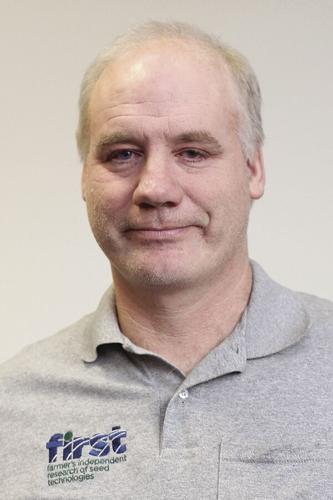 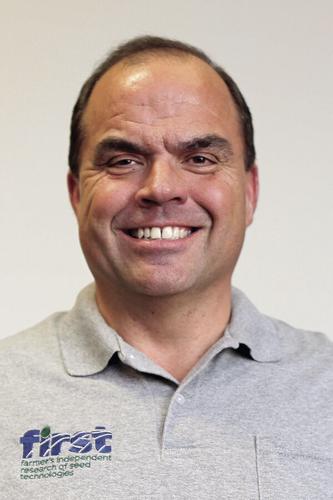 After a slow start to the 2022 planting season, Farmers Independent Research of Seed Technologies (FIRST) managers and farmer-members in Minnesota hope that frost holds off until October.

FIRST managers Mark Querna, in southern Minnesota; Ed Dahle, in central Minnesota; and Luke Brendemuhl, in the Red River Valley, all expressed the need for a long 2022 growing season.

Heat, sunshine, and gentle rain will help corn and soybeans fully develop, mature, and begin the dry down process.

From an agronomic viewpoint, there have been two main challenges this growing season – a cold and wet start that delayed planting and inconsistent rainfall.

Cold and wet conditions through early May 2022 allowed Minnesota farmers to plant just 2 percent of soybeans by May 8 – compared to 59 percent in 2021. As of June 19, 97 percent of the soybeans were planted.

In mid-September the percent of corn crop fully dented had yet to catch up to the state’s average – although it was making progress.

FIRST Minnesota corn for grain planting dates ranged from May 10-28, 2022.

“The corn looks really good given those stressful planting conditions,” Brendemuhl said. “There was a lot of uncertainty trying to go out and plant the test plots – just because of how wet everything was.”

In FIRST corn trials in southern Minnesota, planting started on May 10 and finished May 23, Querna said.

Conditions were dry in June and into July, but 0.5-2.5 inches rain fell most weeks since pollination. In September, the corn crop looked phenomenal across southeast Minnesota.

There was more variation across southwest Minnesota. About 26 percent of the state – in mid-September – had abnormally dry to drought conditions compared to 95 percent one year ago.

Williamson planted the field on May 27.

“This was our last field to plant – our first field was planted on May 6,” he said. “There was a three-week gap from start to finish, so we put a few soybeans in between because those fields were ready to go.”

Conditions have been moderately-dry this summer. About an inch of rain was measured on Friday, Sept. 9, resulting in slightly muddy field conditions but no puddles.

Picking, husking, and breaking one ear in half, Williamson noted the black layer was a quarter to halfway down the kernel.

“This is going to be a full week into October before we even think about harvest,” he said, adding that cornfields on lighter soils were approaching black layer and full maturity.

Williamson and the three FIRST managers said it will be interesting to gather yield and harvest information this year.

In addition, Querna added an ultra-late corn grain trial in extreme southwest Minnesota. He is testing several 108-112-day corn hybrids with the hope that the corn will mature in time and produce large yields.

Highly dependent upon light, it was easy in mid-September to distinguish between early- and late-maturing soybeans. The early-maturity soybeans were losing their chlorophyll and turning yellow. Later-maturing soybeans with adequate rainfall remained green and growing.

“The soybeans look really good,” Brendemuhl said. “They look a lot better than I expected given the stressful, wet, and cold planting conditions.

“What I have been hearing is that soybeans are looking like an average crop. The soybeans appear to be a bit shorter than they have been, but I have noticed the beans have put on a very good number of pods,” he added.

Poor planting conditions slowed growth and development across the region.

Then the rainfall shut off for June and July. Unlike last year, when the rains returned in August, this year’s August and September rainfall remained sparse and variable in northern and central Minnesota – although areas received heavy dews. Most of southern Minnesota received excellent rainfall in August and early September.

“Things look better than last year, but we are still short on rain again,” Dahle said of the central region. “It’s amazing how much is out of our control. Time will tell – October will answer a lot of questions. Maybe farmers got a good rain, but maybe it was not enough during the kernel fill or pod fill.”

He said he’s going to use the words, “A year of extremes,” often in his crop notes for central Minnesota. Farmers in the region continue to clean up and rebuild after hundreds of buildings and bins were destroyed by strong winds and tornadoes.

“Some farmers are saying they have never seen so many clusters of pods on top of the plants,” Querna said. “If these soybeans can keep getting rain through most of September and not run short, I think we have a very good chance of producing some of the best soybeans ever.”

With 1.5-2.3 relative maturity soybeans to harvest, Querna generally starts soybean plot harvest about a week after southern Minnesota farmers have started harvesting. He tries to harvest all the soybean plots first and then starts corn about 10 days after farmers open their fields.

FIRST managers, as well as farmers, are hoping that Mother Nature provides a “friendly harvest as far as temperature and wind.” Lots of sunshine will go a long way toward making the 2022 harvest a good one.

Any day of the Minnesota State Fair, Juanita Reed-Boniface can walk into the 4-H buildings and someone will know her and say hello.

About the cover: Dusten Williamson, Montevideo, Minn., is a new FIRST farmer-member hosting a corn plot this year. He is holding Gold Country 95-day corn with the FIRST plot behind him. Photo by Andrea Johnson. 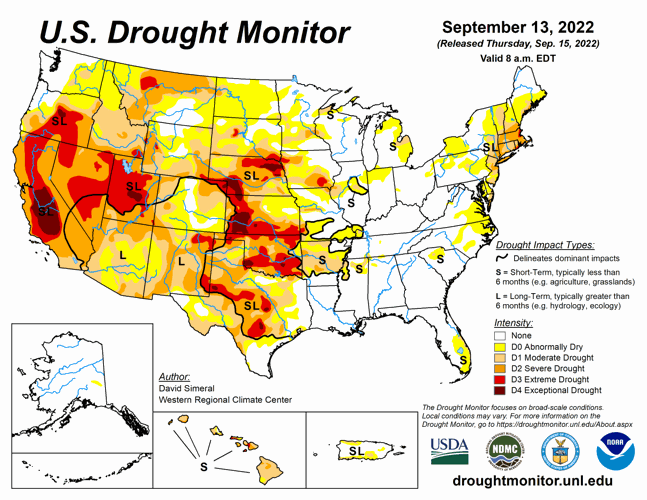