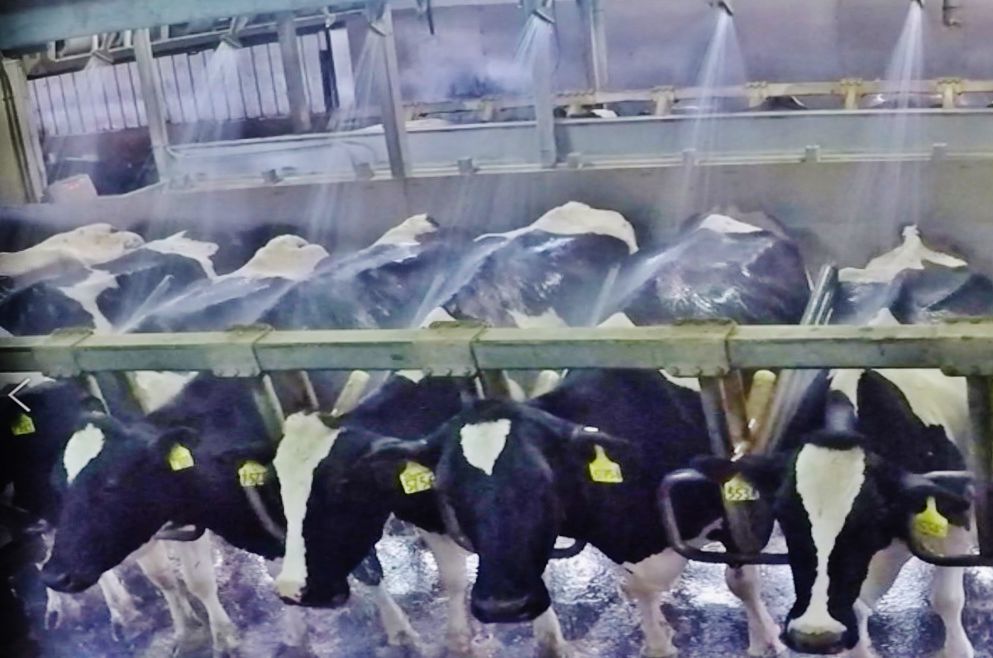 In warm weather, cows receive brief high-volume showers while they are milked in the parlor at Rosy-Lane Holsteins. 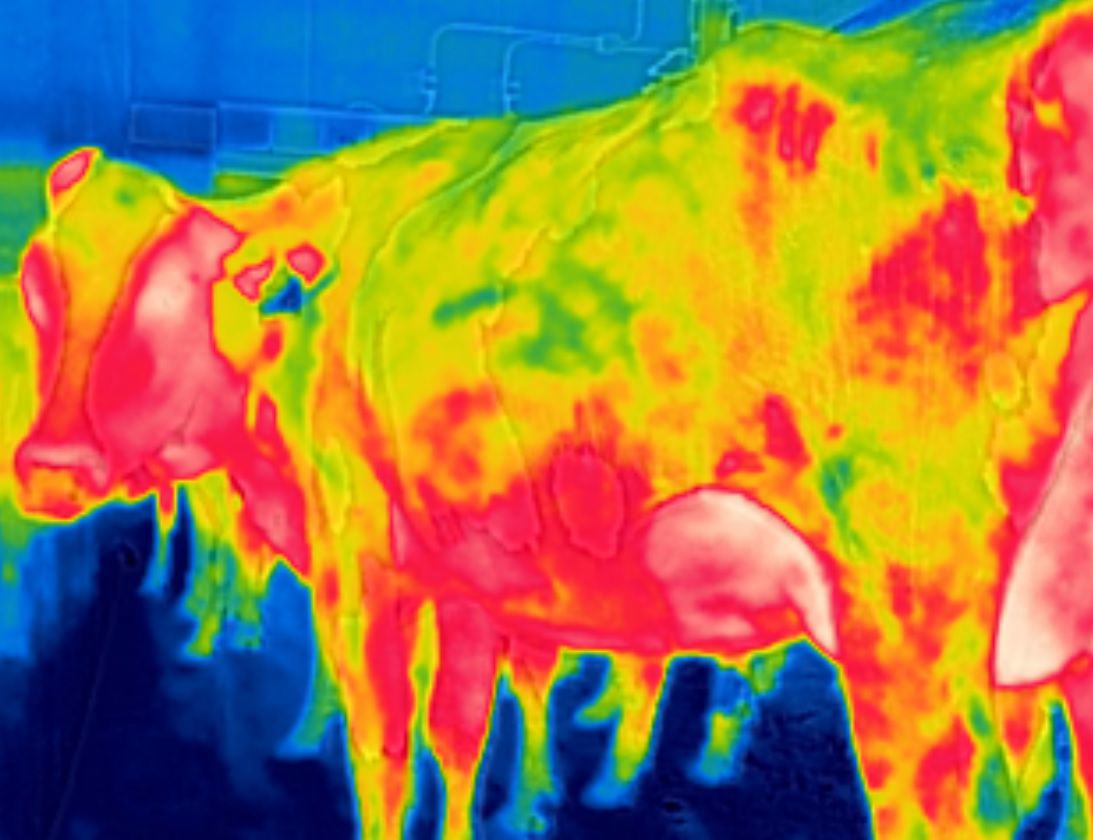 An infrared photograph of a cow following soaking from a shower shows green and blue regions, which indicate cooler temperatures. The yellow and red regions indicate warmer areas.

Regular, left, and infrared photos show a cow’s udder after she was soaked with a shower during milking. Her legs became wet, as shown by the purple, cooler regions, but her udder remained dry. 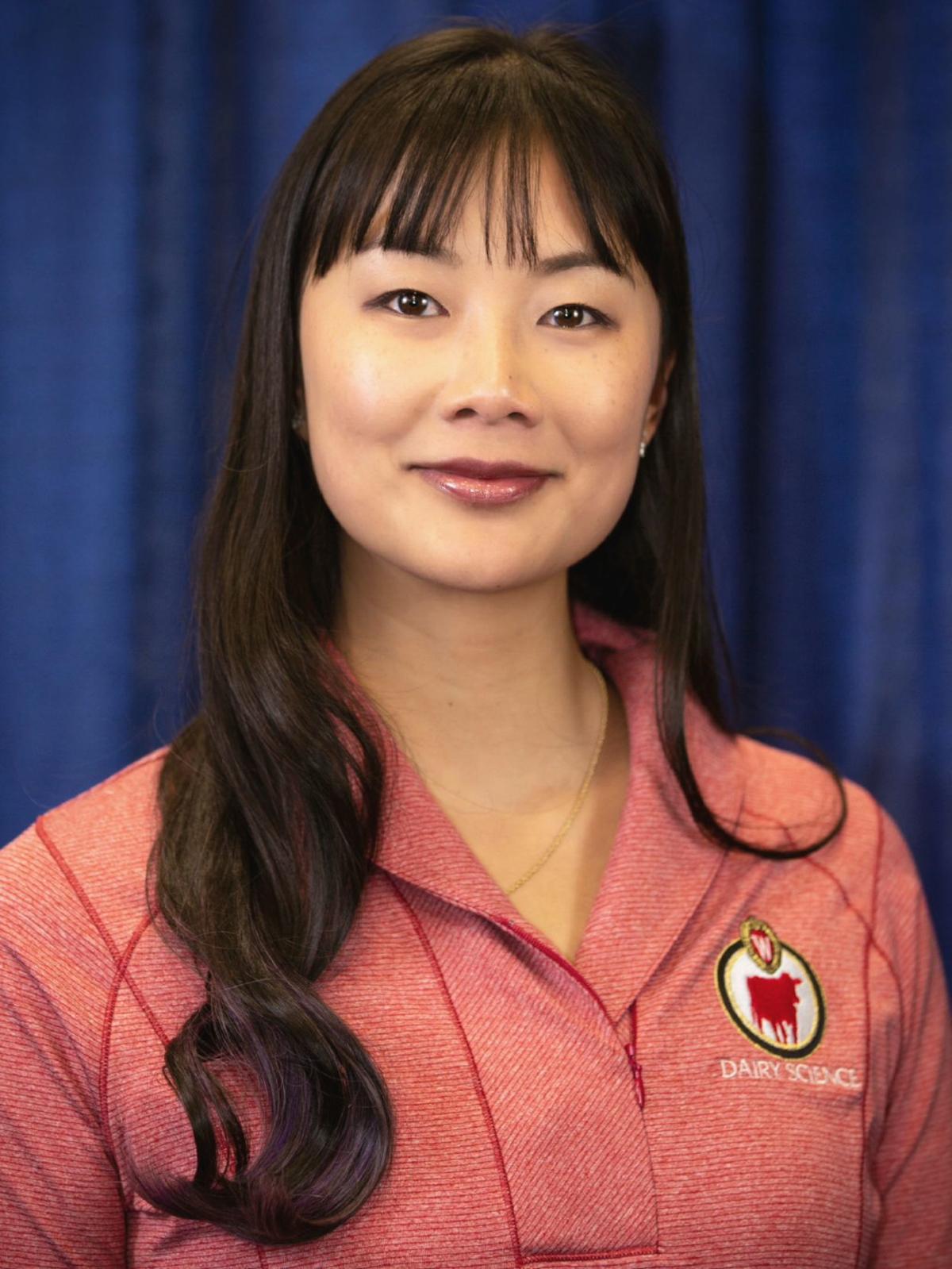 In warm weather, cows receive brief high-volume showers while they are milked in the parlor at Rosy-Lane Holsteins.

An infrared photograph of a cow following soaking from a shower shows green and blue regions, which indicate cooler temperatures. The yellow and red regions indicate warmer areas.

Regular, left, and infrared photos show a cow’s udder after she was soaked with a shower during milking. Her legs became wet, as shown by the purple, cooler regions, but her udder remained dry.

Dairy cows in almost every region of the world deal with heat stress at some point. At Rosy-Lane Holsteins near Watertown, Wisconsin, the farm has made improvements throughout the years to help the cows beat the heat.

Ten years after building a naturally ventilated freestall barn with fans over the stalls, the dairy built a mechanically cross-ventilated barn. Baffles push fast-moving air down to cow level. Ensuring fast airspeeds reach where cows are lying down is important to promote adequate rest. Farm partners Jordan Matthews and Lloyd Holterman said the cross-ventilated barn provided a more-comfortable environment for the cows. They put their earlier-lactation best-producing cows there. Those cows are more vulnerable to heat stress because they generate so much body heat while producing milk.

My animal-welfare research group includes Rekia Salter and Kim Reuscher, graduate students in dairy science at the University of Wisconsin-Madison. They wanted to help the farm owners discover whether the strategy was working as intended. We teamed with Mario Mondaca, an engineer with Nigel Cook’s team at The Dairyland Initiative, to assess the barns and cow responses.

The cross-ventilated barn is working well overall. At the same level of temperature-humidity index, cows in that barn tended to have lesser respiration rates than those in the naturally ventilated barn where airspeeds in the stalls were more inconsistent. Nonetheless on the warmest days respiration rates were elevated for cows in both barns. There’s no precise heat-stress threshold for respiration rate. But at 60 breaths per minute it’s clear that additional cooling would help cows cope better.

At Rosy-Lane an additional cooling strategy is implemented at milking time. It’s well-known that high-volume low-pressure soaking of cows can be effective for alleviating the negative effects of heat stress. Those negative effects include elevated core-body temperature as well as depressed feed intake and milk yield. But soaking cows at the feed bunk or in the holding pen inevitably leads to water waste, because individual-cow presence under the nozzles varies.

The Rosy-Lane partners worked with their plumber to run recycled water from the plate cooler to the parlor, where individual showerheads over each milking stall soak cows briefly while they are being milked. The showers use about 3 gallons per minute. They are turned on only after the milking claw is attached on the final cow in that side of the double-12 parlor. That ensures water isn’t already spraying when cows enter, which could cause them to balk. It also ensures the spray doesn’t enter the teat cups while they are being attached.

A common question about soaking cows in the parlor is whether that increases the risk of mastitis if the teat ends become wet. Before and after the cows were showered, we examined the backs of their udders for wetness. We took digital and infrared photographs. After the showers the udders remained dry in four out of every five instances. When we did observe wetness, we classified the drip patterns. We rarely saw streams of water reach the milking cups or the teats. Somatic-cell count averaged 161,000 throughout a study this past August.

The benefits of the showers for rapidly cooling cows was readily apparent. Immediately after showers the respiration rate was reduced on average by 10 breaths per minute. The difference in respiration rates when cows were showered versus not showered was especially noticeable on the hottest days when the cows needed the most help staying cool.

A potential concern about soaking cows only at milking times is that body temperature may not stay suppressed for the entire time between milkings. But in looking at the data, cow core-body temperature was already in the normal range – from 100.4 to 102.7 degrees Fahrenheit – 99 percent of the time before milking. That told us the ventilation systems in the barns and holding pen played an important role in helping the cows dissipate heat. The showers in the parlor were an added benefit to help the cows not need to work as hard in coping with heat stress.

After relaying those findings to the partners at Rosy-Lane, we presented our results at the American Dairy Science Association meeting in Cincinnati, Ohio. Recently the U.S. Department of Agriculture awarded our research team a grant to gather data on ventilation performance across more farms and create a training program. The goal is for others in the industry to learn to use our method for providing customized feedback to improve ventilation and cooling performance. Contact jvanos@wisc.edu if interested in the project.

Jennifer Van Os is an assistant professor and University of Wisconsin-Division of Extension specialist in animal welfare in the department of dairy science at UW-Madison. Email jvanos@wisc.edu to reach her.