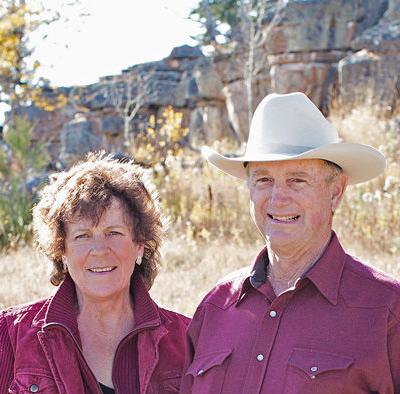 Bev and Ed Fryer enjoy the day at a family gathering near Sheep Creek in fall, 2018. 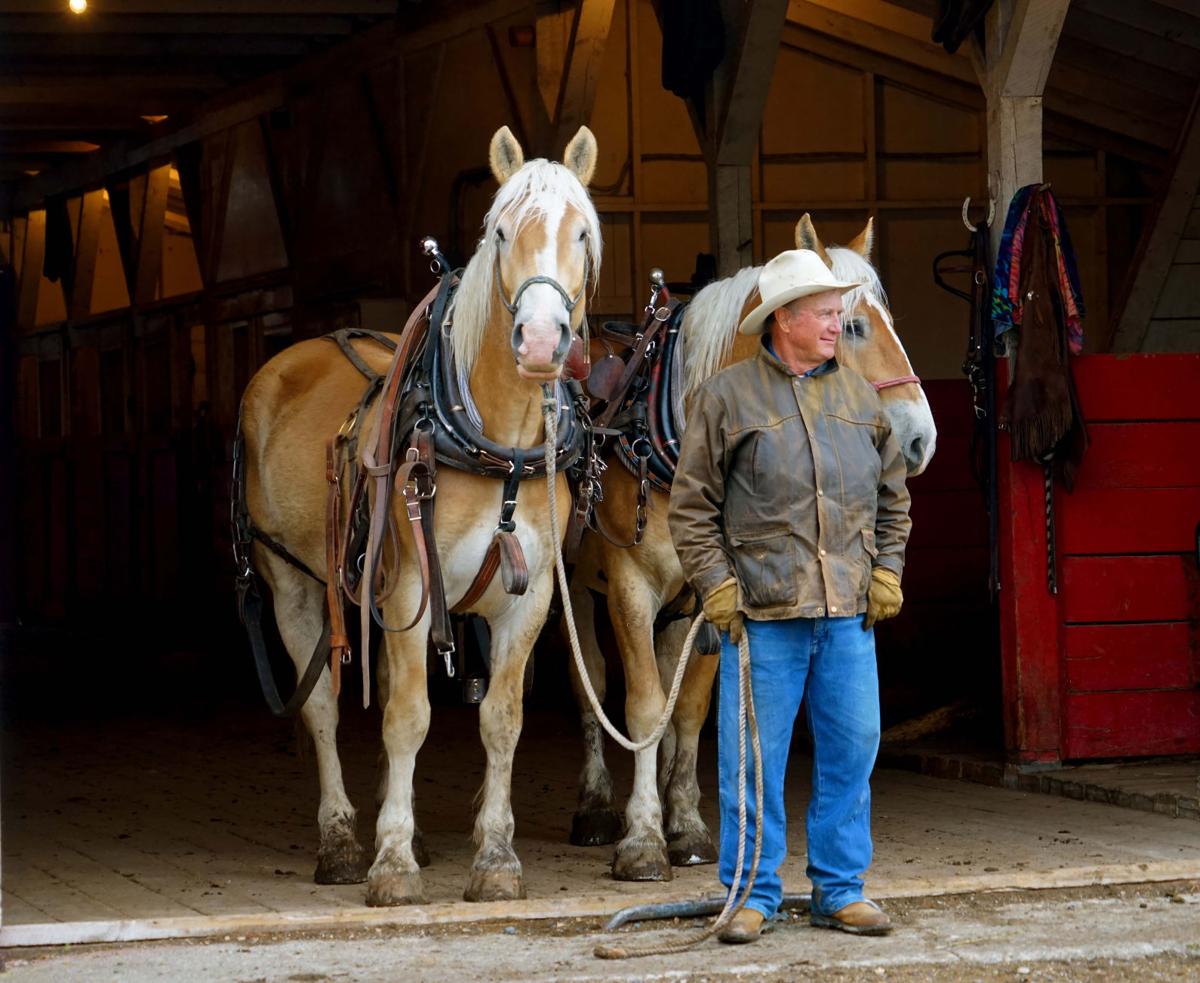 Ed Fryer, retired rancher who managed several ranches in the mountainous areas of Montana and Wyoming, leaves the barn with a  “young horse team we trained for a lead team in a four-horse hitch.” The Prairie Star wishes everyone a Merry Christmas.

Bev and Ed Fryer enjoy the day at a family gathering near Sheep Creek in fall, 2018.

Ed Fryer, retired rancher who managed several ranches in the mountainous areas of Montana and Wyoming, leaves the barn with a  “young horse team we trained for a lead team in a four-horse hitch.” The Prairie Star wishes everyone a Merry Christmas.

With a gigantic heart for ranching and a keen eye for business, Ed Fryer has been known over the years as someone who can bring a new vision to challenges that might occur on a ranch.

“Ranch owners have brought me in when they need someone from the outside to look at an existing situation, make common sense proposals, and quickly implement solutions,” Fryer said.

In the mountainous areas of Montana and Wyoming, where the cowherds are numerous, and the challenges great, Fryer has worked on, supervised and/or managed several ranches.

Since 1998, Fryer and his wife, Bev, have also managed Castle Mountain Ranch. They are mostly retired now, and their oldest son, David, now manages the ranch.

“We’ll still go back and help David with the big things like branding, calving, weaning, and other special projects,” he said.

The father/son duo taught low-stress cattle handling for years as part of the BQA program in Montana, and they’re well known and respected for their cattle handling techniques.

Fryer watched and learned livestock handling from the best – his father – and the older hands on the range.

“As a youngster, I traveled with my father, nicknamed Speck, to many ranches in the foothill country of southwestern Montana, where he was a professional trapper dealing with problematic predators,” Ed said. “A keen sense of animal behavior was a skill he passed on to me.”

Fryer liked horses, which were still numerous at the time.

“Eventually, I was able to start helping on remote ranches with horseback work,” he said. “It was immediately apparent there was a difference in how people handled livestock. The smooth ones made it easy, but others struggled with the same tasks.”

On big ranches, the horses often outlasted the people, so there was a real lesson in how those experienced horses responded to different people.

“Basically, a good hand could do a nice, quiet job on most horses, while the poorer ones had difficulty – no matter what horse they rode, and likewise, with the cattle,” he added.

Fryer’s career in agriculture started after he received his degree in range management from Montana State University. Afterward, he began working on ranches.

“I began my career as a full-time cowboy on a large, remote, absentee-owned mountain ranch in 1973,” he said.

As his skill set improved, Fryer was assigned larger and larger projects, eventually calving hundreds of heifers or running thousands of yearlings.

In the ’80s and ’90s, he was in supervisory positions, managing cowboy crews in large areas with multiple projects occurring at the same time, and then in management positions on the ranch.

Some facets of his job included grazing management on both private and public land, inventory management of livestock and hay, bull buying and budgeting.

“It was all under the ‘direct no-nonsense system’ with a high degree of accountability,” he said.

Through the years, Bev always stood alongside with Ed.

“She did whatever needed doing – heifer calving, cooking, clerical work, being grounds keeper, helping feed livestock, budgeting and doing all sorts of horseback work in remote areas, plus a lot more,” he said.

In 2014, Bev was named the Montana Stockgrowers Association’s Ranch Woman of the Year.

Ranch owners heard about Ed and Bev, and in the ’90s, they were asked to bring their skill set in wherever a different approach was needed.

“I took over in both the earlier supervisory roles, and later management roles, on several ranches as someone with a unique skill set that could facilitate changes on a variety of issues,” he said.

Occasionally, these ranches had more than one division and were separated by significant distance.

“A common challenge was often financial, which usually resulted in a smaller crew,” he said. “Effective low-stress livestock handling with less people became one of our mainstays in overall efficiency. We simply had to do more with less.”

With a career in ranching above 5,000 feet in elevation, Fryer knew that on every ranch, including Castle Mountain, conservation and stewardship of the land were vital to sustainability – keeping the soil, water, grass, and animal health in the best condition possible for not only the present, but for future generations.

Within that concept, each ranch Fryer managed had its own different set of challenges, landscapes and livestock – and each required a separate approach.

“It’s important to remember that everybody is a little bit different and each ranch is really unique and different,” he said.

At Castle Mountain, Fryer had the opportunity to address all facets of the operation and make positive adaptations that included: livestock, grazing, facilities, hay production, irrigation, harvesting, equipment, timber and wild game.

“The current operation is positioned to function in a sound and sustainable manner, while still allowing for future adaptation,” he said.

Castle Mountain cows now calve in April and then start out to grazing areas in June. Some continue on to adjacent forest allotments.

“The cows move to various remote locations to graze native prairie grass until calving,” he said. “Cows come in to ranch headquarters for calving while still on native grass and purchased alfalfa hay, then go back out again – never in one spot for long.”

Castle Mountain does not sell calves off the cow. The ranch sells yearlings.

Calves are weaned in the October/November timeframe.

Weaned calves graze hayfields with supplemental cake until late December and then grass and purchased alfalfa hay, plus cake, until late May.

“Calves then go out to grass, with shipping from ranch scales in August/September,” he said.

The result is very adaptable to drought.

“We can always sell yearlings early to reduce stocking rate without sacrificing our valuable well-adapted native cowherd,” he said.

Similar principals are applied to the several thousand tons of grass hay that Castle Mountain produces each year – well adapted to the high elevation and short season. Hay is flood irrigated through upgraded systems and harvested with lower labor big square bale equipment.

“Feeding is done at various locations, with a mixture of equipment, including heavy reliance on draft horses and specialized loaders,” he said.

Between them, Ed and Bev have gained a lot of business acumen over the years.

“Bev has had very early experience with computers from back in her college days. Over time, she developed a specialized budget format in response to a specific need, which we can still use in projecting various management scenarios,” he explained.

In addition, they have the ability to track individual hay stack inventories from actual sample weights.

“We can track feed consumption if we have a need to verify consumption,” he said.

Detailed inventory records on both livestock and hay are in place, with annual audits and reconciliation. There are very few surprises under their “no nonsense system.”

As a result of the resource and operational adaptations over time, Castle Mountain Ranch was the recipient of a past Montana Environmental Stewardship Award.

“As owners, the Ward and O’Hara families, the Fryer family, and all the employees we have had over the years, are very proud of that award,” Ed said. “It is an example of what can be done over time by combining attention to detail, a work ethic, accountability and a goal-oriented commitment.”

Ed and Bev have two married sons with young families.

David, the current manager of Castle Mountain, spent several years as foreman, supervising much of the day-to-day operations of the ranch. David’s wife, Erin, works for the Forest Service. Both have degrees from Montana State University.

Jim, the oldest son, is an economist who currently works as a cash grain buyer for Bos Terra near Hobson, Mont., and does commodity trading. Jim’s wife, Heather, is a research associate in cropping systems at MSU’s Central Ag Research Center. Both have master’s degrees from Colorado State University.